With the Corona Virus hanging over the sport like the sword of Damocles plus a morning of heavy rain failed to deter enthusiasts who showed their stoicism in difficult circumstances to support the New Forest meeting at Larkhill on Sunday afternoon.

Anybody who has visited in Larkhill in similar conditions would have agreed with the sentiments voiced by one individual who suggested “The virus would never have survived in the wind and rain at Larkhill yesterday”.

Racegoers were treated to some exciting racing which saw Sophie Lacey introduce two potential stars of the future in Kaphumor and Grizzman with the latter looking the most impressive of the pair.

As is to be expected both had been prepared immaculately at the trainers Woolhope academy, jumping like season performers and benefitting from Tommie O’Brien’s assistance.

Kaphumor set the ball rolling in Division I of the Open Maiden. Surprisingly, the 4-year-old son of Kapgarde did not start favourite, this accolade passing to Robert Waley Cohens homebred Wykham.

Six horses were in a bunch with four to jump but the contest then turned into a straight fight between Lacey and the Waley Cohens over the remaining obstacles and there was little between the two horses around the final bend. 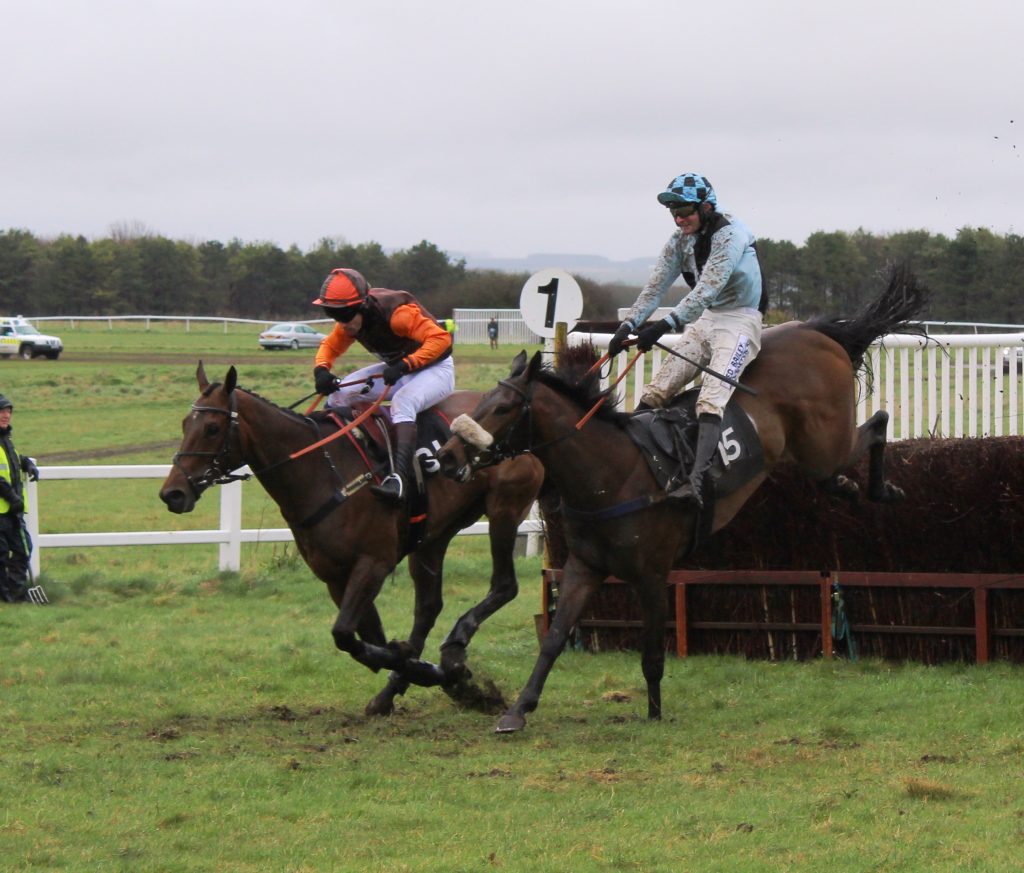 Wykham held a narrow lead at the last, but with an 18 lb weight concession in his favour Kaphumor eased 2-lengths clear of his rival on the flat. “He’s so immature but has so much ability and works nicely at home” were the trainers after race comments. 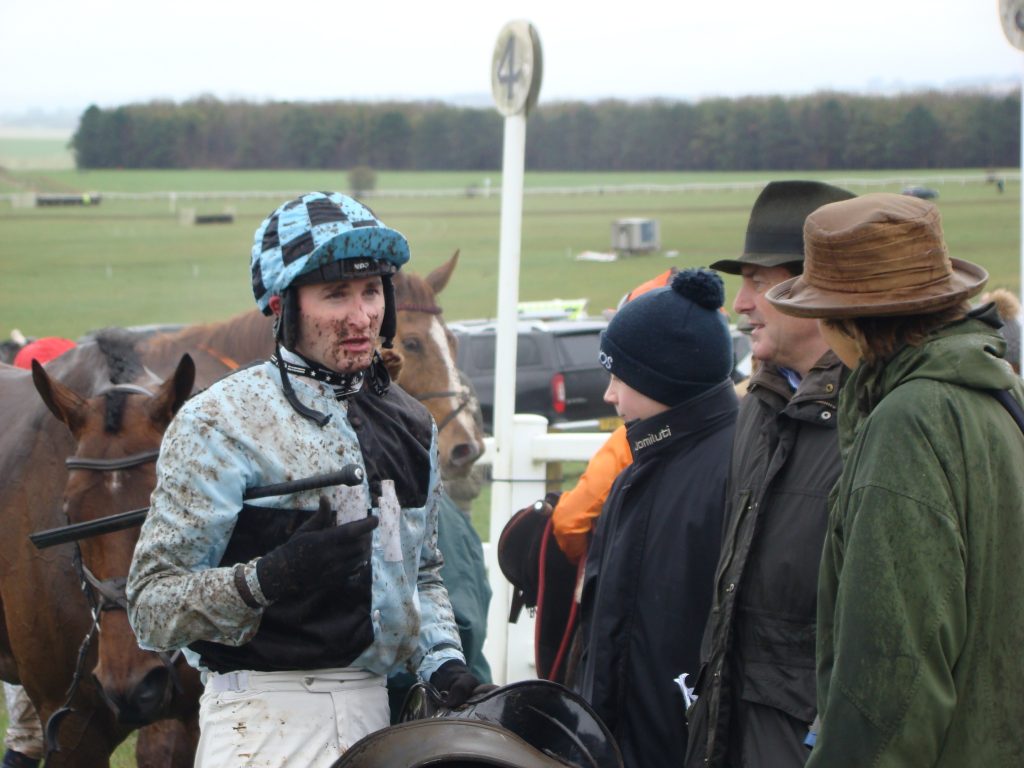 O’BRIEN PROVIDES CHARLIE BROOKES WITH A DEBRIEF AFTER THE RACE

The 2-1/2 mile Maiden saw the introduction of newcomers from the Nimmo, Lacey and Treadwell stables but the latter’s Risk D’Argent was an early casualty, which meant that representatives from the two big “selling” stables were left to fight out the finish.

After Maitree Express had weakened Grizzman’s (Sophie Lacey) mistake at the second from home provided Adjournment (Fran Nimmo) with a window of opportunity but the former recovered quickly and was able to hold his rivals challenge around the final bend. 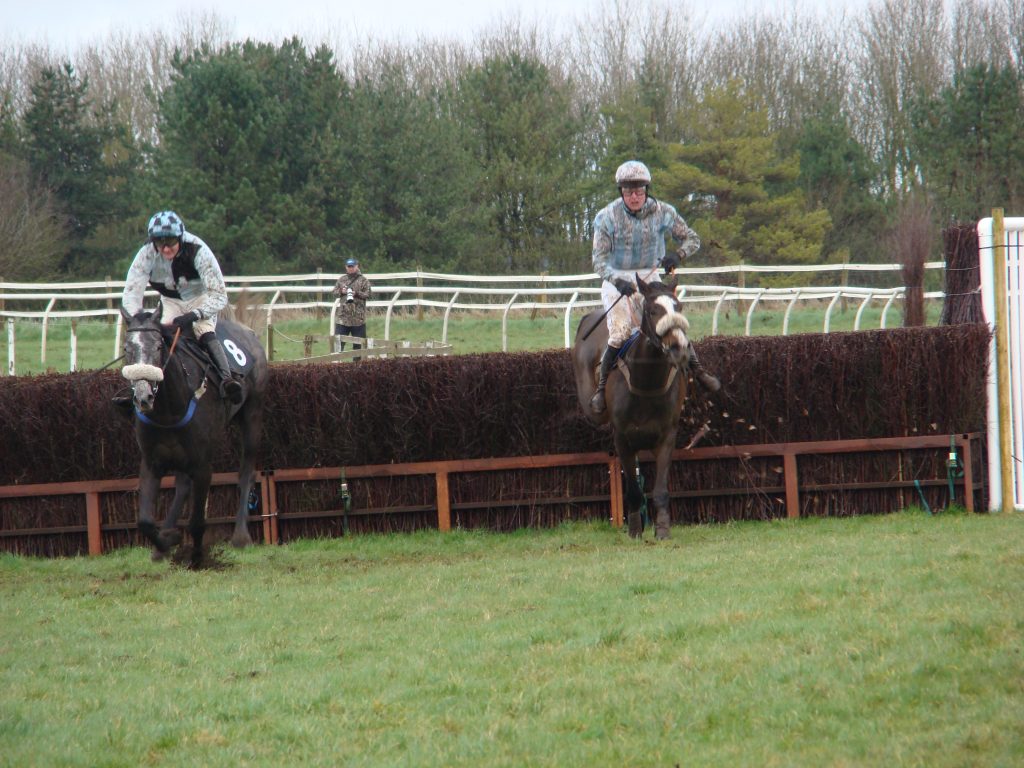 GRIZZMAN (LEFT) AND ADJOURNMENT BATTLE IT OUT AT THE LAST

He was still in front at the last and held the renewed challenge of his rival in the final 25 yards, and on these performances both horses look to have a bright futures.

After a winner at Cothelstone the previous afternoon with Lilith Bridgnorth trainer Phil Rowley had to wait until the final race of the day to gain his reward at this meeting with Vivaldi Collonges and Ben Bromley made it two from two for the season with an emphatic win in the Novice Riders.

This partnership had been successful at Cottenham and had little difficulty justifying their short odds by drawing clear of their rivals over the final three fences and consolidating the riders position at the top of the Harley Racing PPORA Novice Riders Points Series. 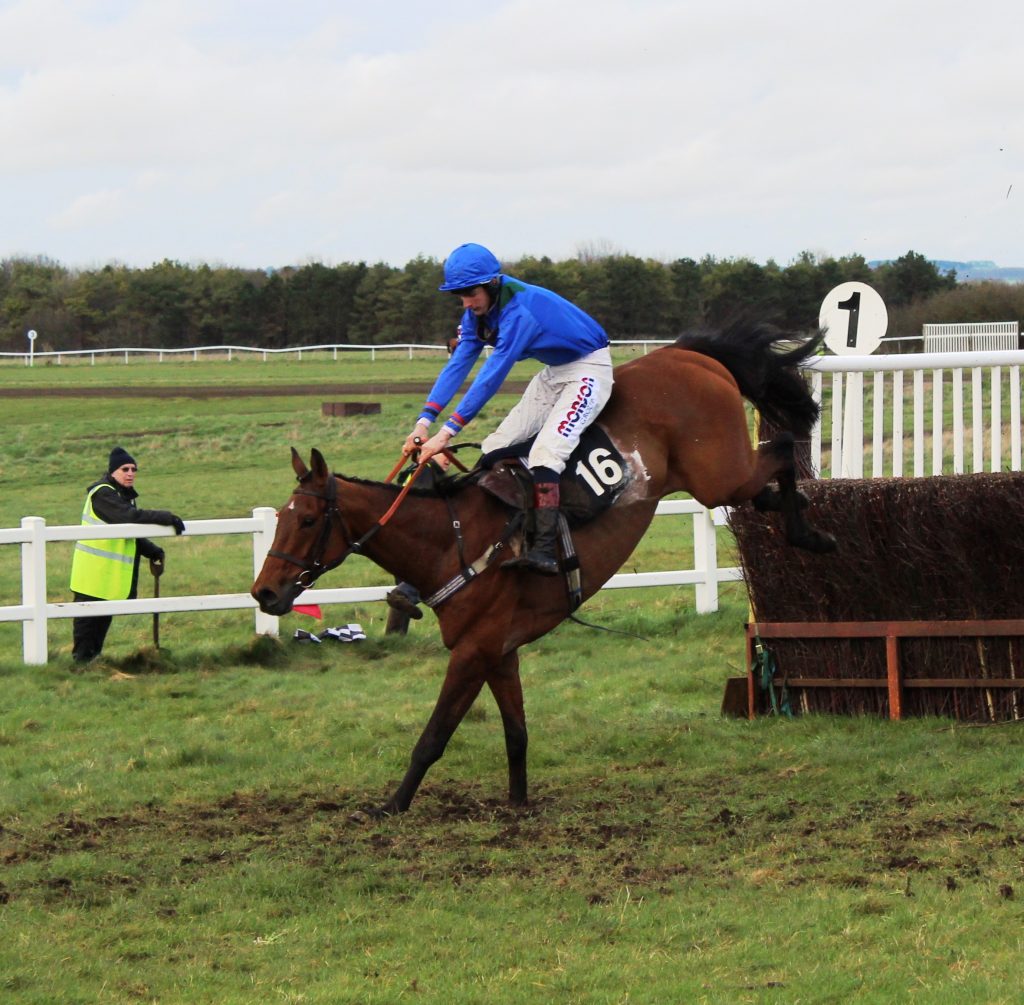 VIVALDI COLLONGES AND BEN BROMLEY ARE WELL CLEAR AT THE LAST

Rowley’s stable jockey Alex Edwards endured a frustrating afternoon with the well fancied Fleur de Pommier pulling up in the Oriental Club Owner/Trainer Race, while Saquan had to settle for second place in Division II of the Open Maiden.

Tom Weston’s runner had unseated his rider when the saddle slipped on his racecourse debut at Chaddesley Corbett but for a long way in this contest it looked as though he would gain compensation.

Having raced wide throughout, Saquan led at the 15th and was maintaining his advantage over O’Faolains Boy until he showed signs of inexperience by wandering off the final bend. That allowed Tom Doggrell to sneak through on the inner and with the second continuing to hang up the run in the Weston representative was 2-lengths down at the line.

While her stablemate Big Georgie was finishing second to the Navanman at Buckfastleigh, Cashmoll ran a promising race to gain the runners up spot in the Restricted.

The mare had not been out since Bredwardine last May while for the favourite Voie Dans Voie this was a fourth outing of the season. It would be disrespectful to the winner to suggest this made any difference to the result because Sarah Oliver’s runner was outpaced as the favourite forged into a clear lead between the final two fences. 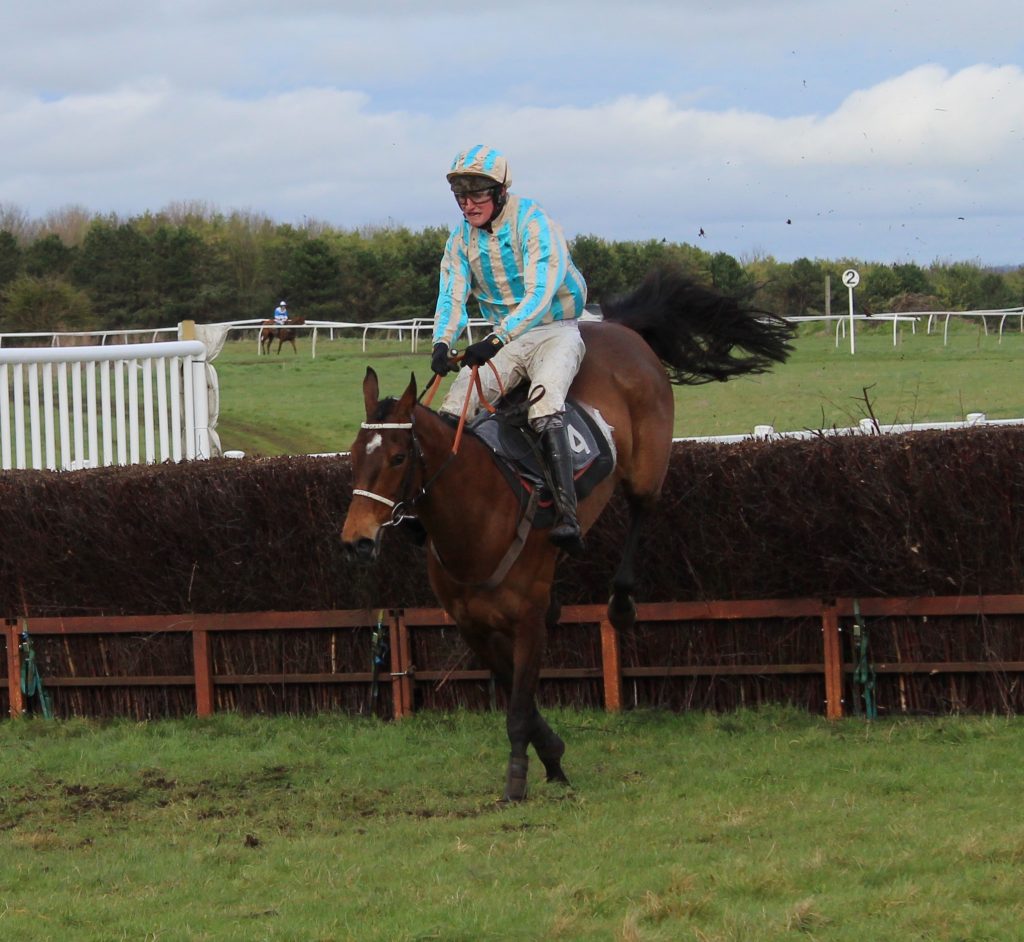 CASHMOLL CLEARS THE LAST TO CLAIM SECOND PLACE IN THE RESTRICTED

The Mares Maiden at Cothelstone on Saturday had to be divided but both halves of the race went to winners with West Midlands connections.

Division I went to Martin Oliver’s newcomer Scattercash who led in the last 100 yards to score for Tom Ellis and Gina Andrews, while Division II was won far more easily by the Phil Rowley trained and Alex Edwards ridden Lilith.

One of the biggest surprises of the day was provided by Thumb Stone Blues 16-1 success in the PPORA Conditions. The Jason Warner owned gelding was taken wide by Byron Moorcroft and those tactics proved successful as the partnership led at the fourth from home and stayed on strongly to withstand the challenges of their rivals over the final half mile. 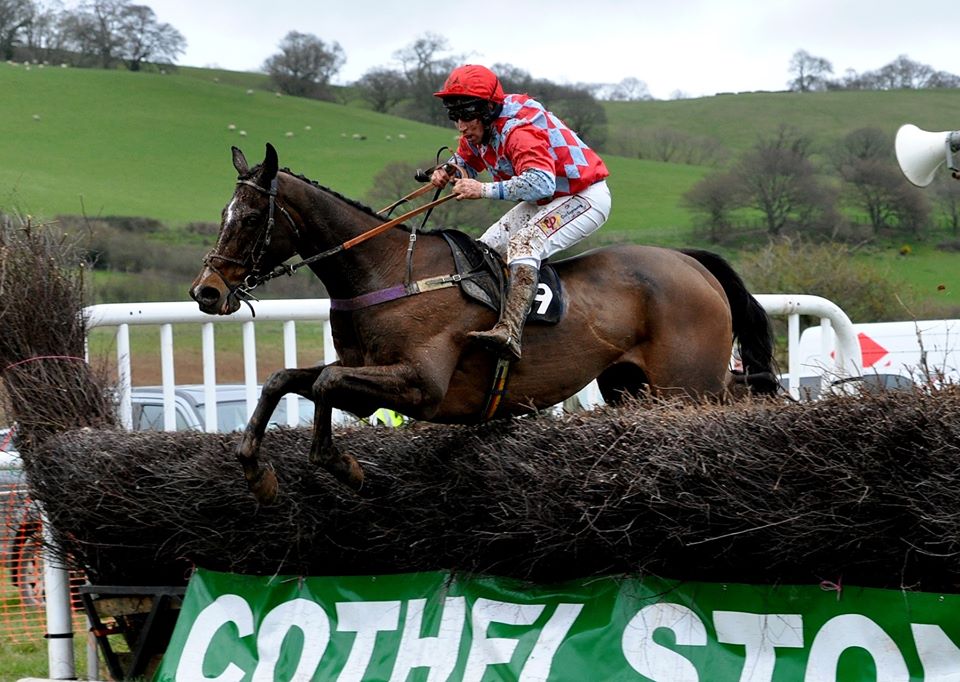 With thanks to Alun Sedgemoor at Sporting Prints

Remainder of photos provided by Graham Fisher and Pete Mansell