After a great start to the season, winners proved elusive for West Midland stables over the Christmas period and that trend continued as the first meeting of the New Year took place at Larkhill on Sunday morning.

The pattern for the day was set during the opening race and did not relent as our runners kept missing the target.

Despite having a runner (and winner) at Plumpton Leading National Hunt Trainer Paul Nicholls preferred to spend his time in the more relaxing atmosphere of a Wiltshire Point-to-Point, and it was in his capacity as an owner that Nicholls was on hand to greet Chameron after the 7-year-old who he co-owns with John Bolton and Harry Cobden outclassed his rivals in Division I of the Conditions.

Angus Cheleda’s mount took the lead approaching the second from home which proved decisive and allowed them to open up a race-winning lead. Miss Seagreen and Sam Jukes who had won at the previous meeting were still in 6th place at that point but as always, she was putting in her best work at the finish and closed the gap on her rival all the way up the run in. 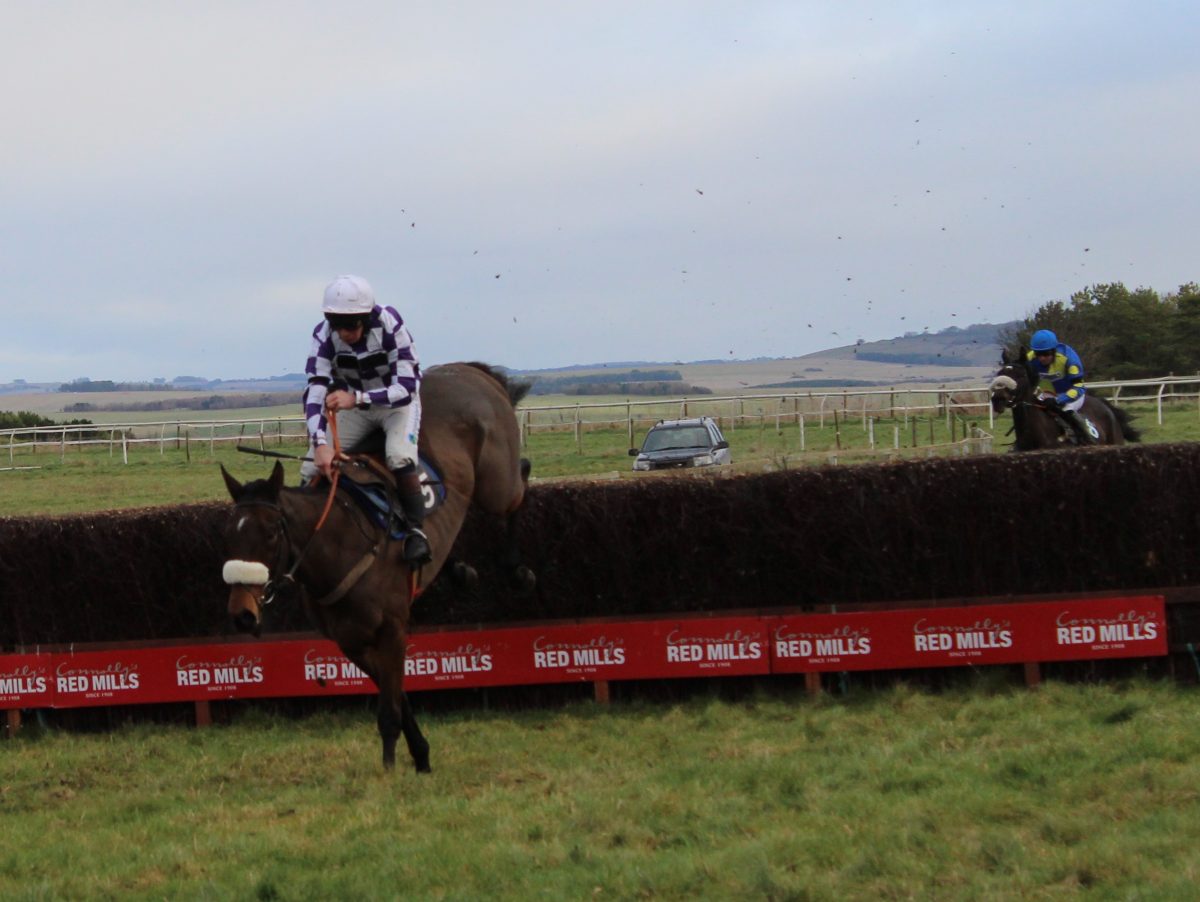 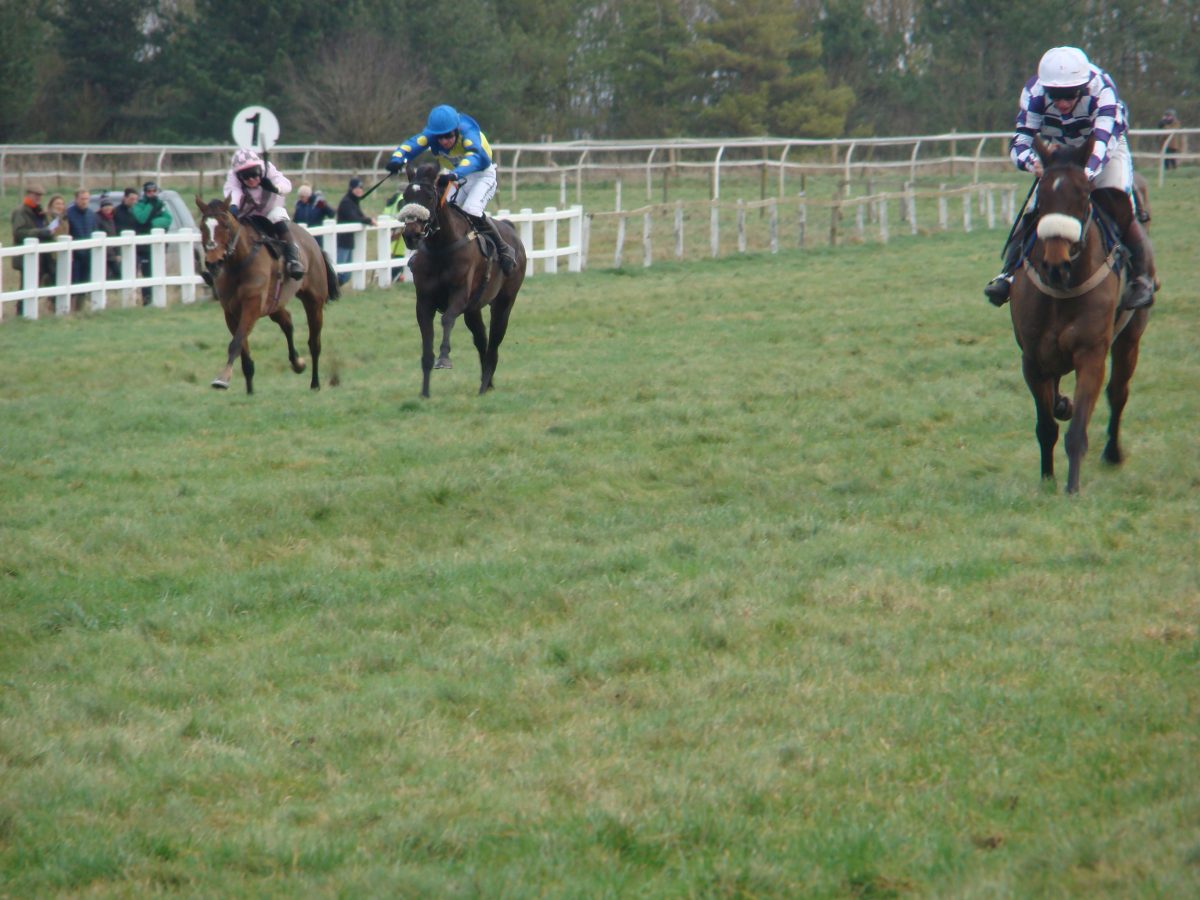 Chameron clears the last from El Bandit, Miss Seagreen is not in the picture but she finished strongly to secure second place on the flat

Winning trainer Rose Loxton and Nicholls looked on course for a quick double as Captain Bucks seemed to be getting the better of the argument with Wick Green as they approached the final obstacle in Division II of the Conditions.

Natalie Parker’s mount was quicker away but Wick Green fought back gallantly to defy his 3 lb penalty and headed the leader in the final strides to gain a head verdict for  owner/trainer Peter Mason, while the Cotswold qualified Marten who had won at Dunsmore took third place on the flat. 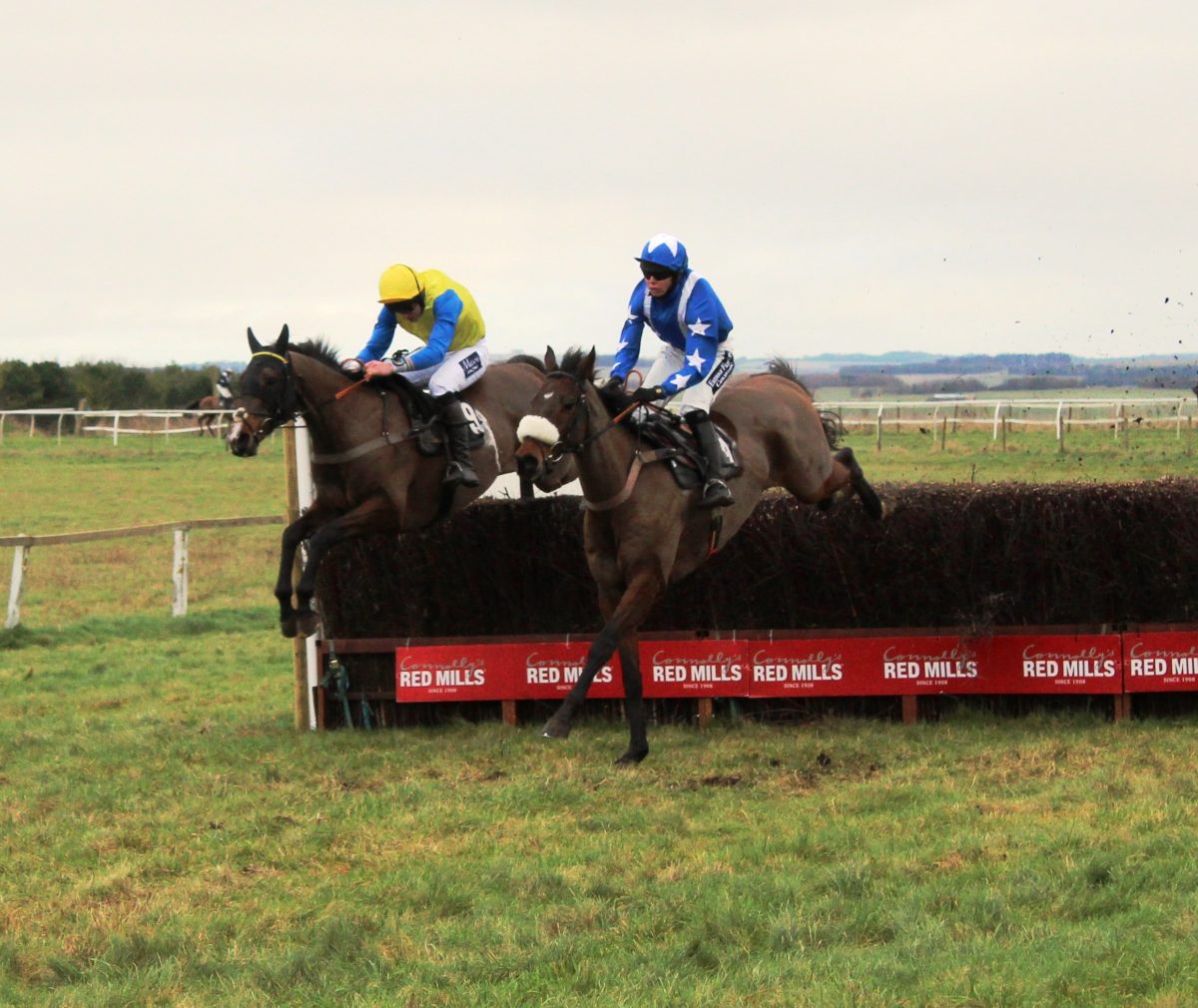 The Loxton/Nicholls bandwagon got back on track when Virak beat previous course winner Southfield Theatre in the Ladies Open. The formbook suggested it was a two-horse race although Alice Stevens was a significant booking for Emma Alvis’s Big Casino in the Skinners sponsored contest and these three horses dominated the race from flag fall.

Southfield Theatre adopted his customary front running tactics and was still dictating the pace as they came back into view at the far end of the course. Big Casino began to drop out of contention at this point and the two market leaders had the race to themselves during the final half mile.

Lilly Bradstock’s mount was much quicker over the fences but Virak’s speed helped him regain the initiative on the flat, but the former still held a narrow lead as they came around the final bend.

Natalie Parker sent Virak to the front approaching the last but the runner up fought back gallantly to reduce the deficit to a length as they passed the judge, while Big Casino was secure in third place when he departed at the final obstacle. 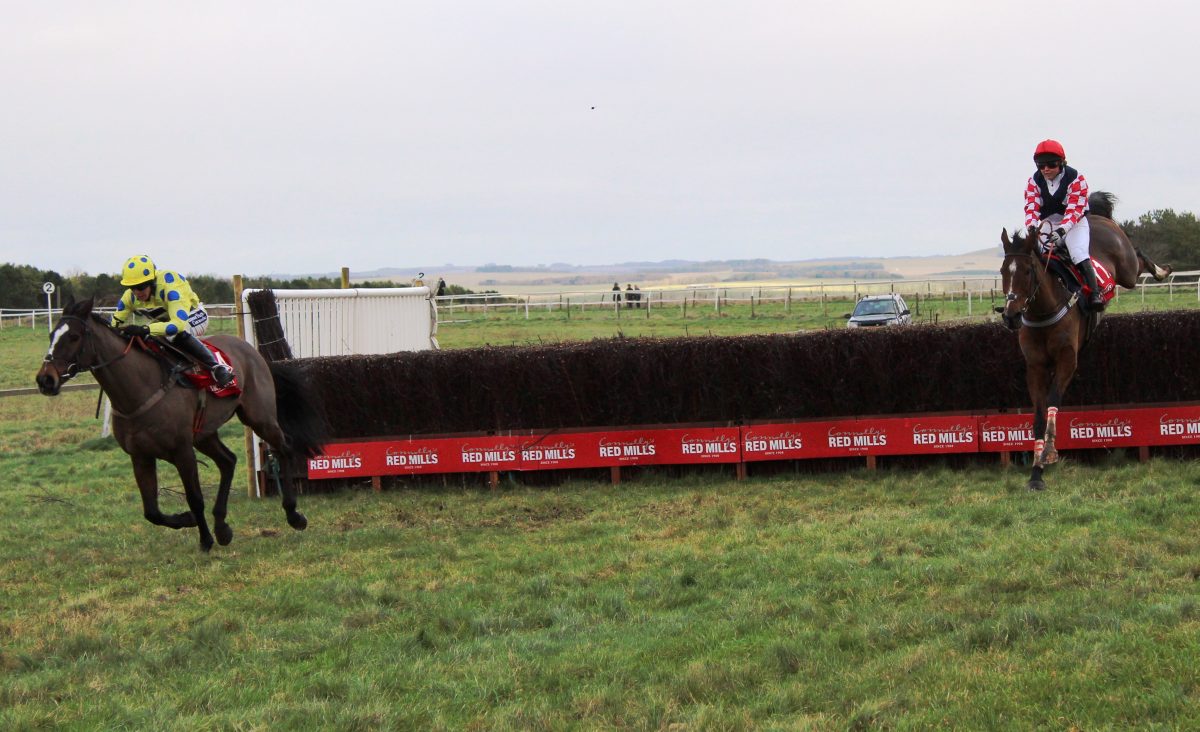 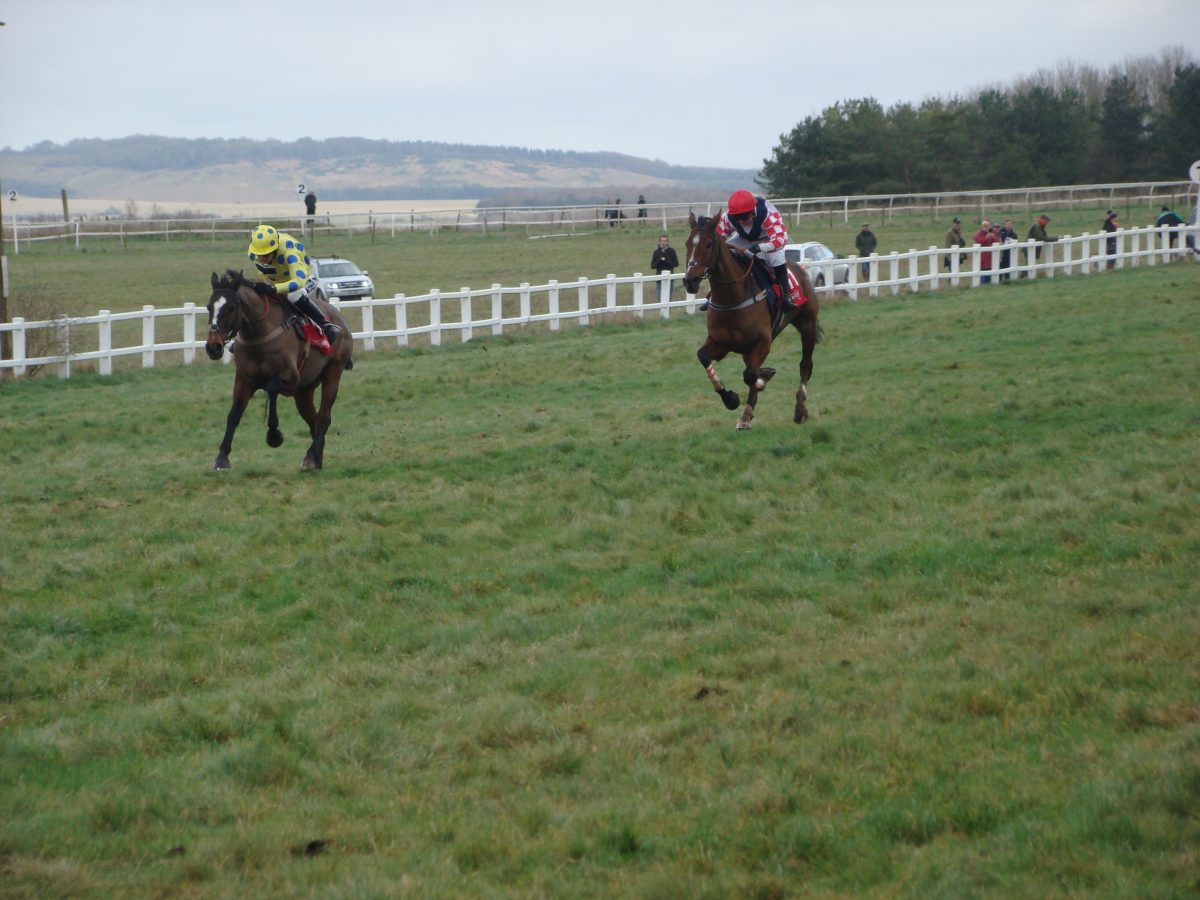 This was another success for Nicholls who owns the winner in partnership with Ledbury Businessman Clive Hitchings whose colours have been familiar features on the West Midlands circuit for several decades.

The two Divisions of the Maiden saw contrasting fortunes for two of the area’s leading riders with James King prevailing over Alex Edwards in the first while Edwards was able to turn the tables on his rival in Division II.

The market was particularly strong in Division I with Fedelta, Kynance Cove, Wykham and Butter Hill Boris all receiving support, while Phil Rowley’s runner My Bobby Dazzler seemed to have few friends.

Military Mischief led for much of this contest before Wykham fought his way into contention but was passed by Fedelta while My Bobby Dazzler was brought with a steady run that took him from 5th to 2nd on the approach to the final bend.

James King had kept a bit up his sleeve and was able to kick again in the home straight and that carried him to a decisive victory. 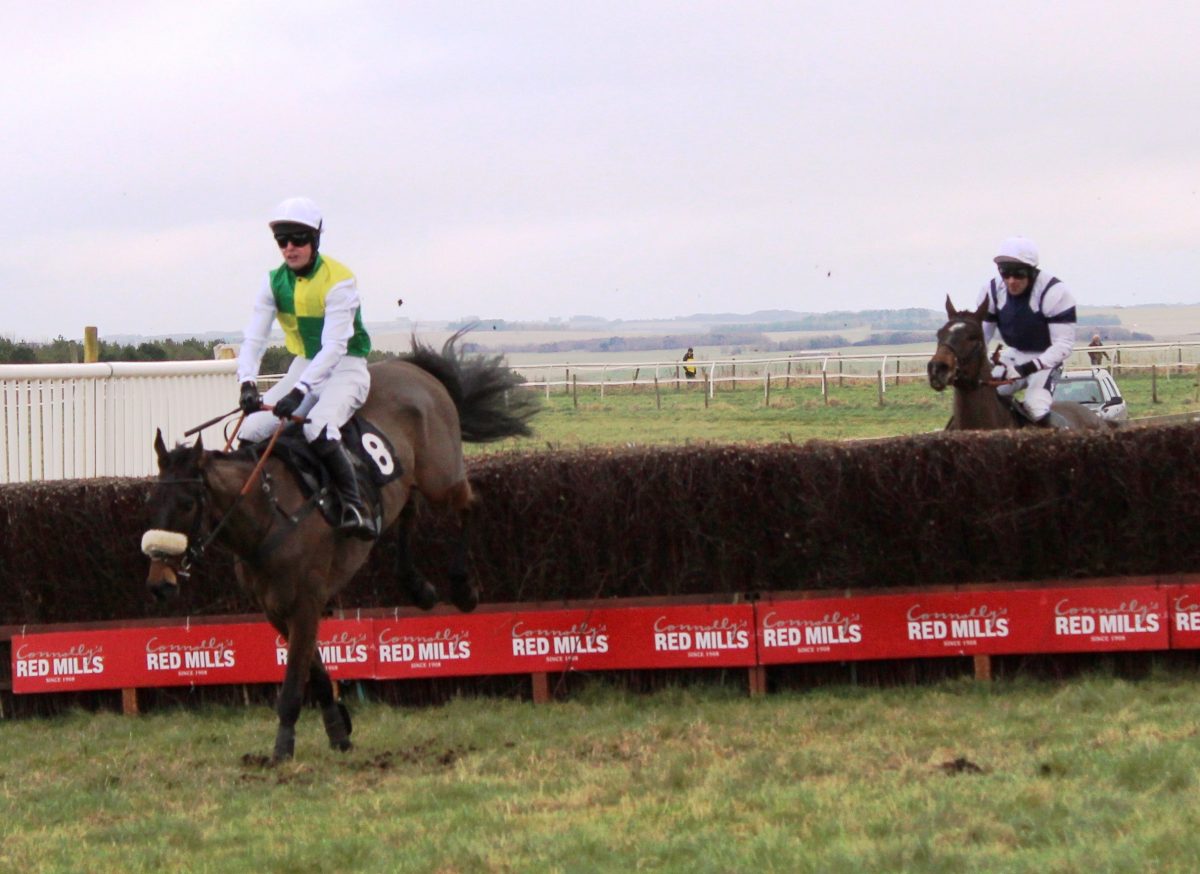 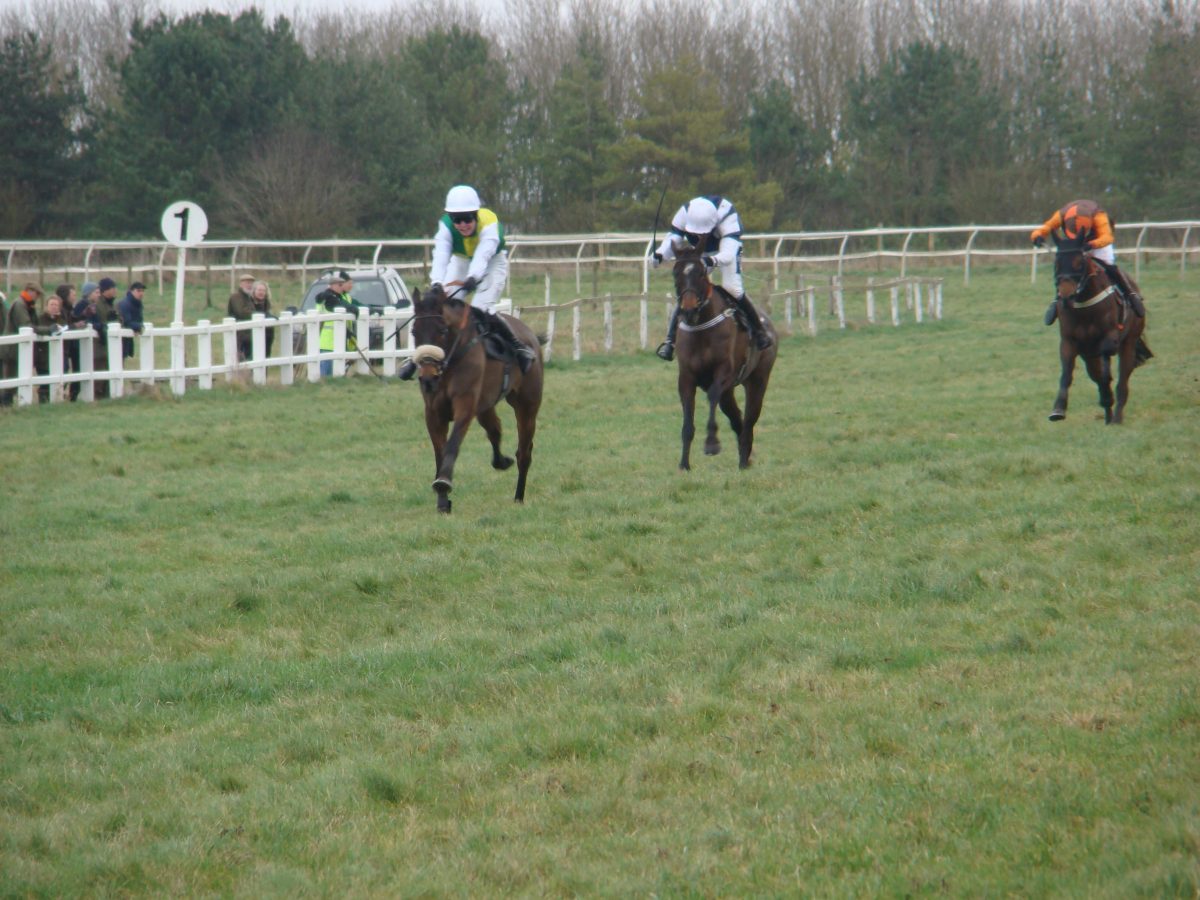 Fedelta and James King score an impressive win in the Maiden

The winner was carrying Trevor Hemmings famous yellow and green quartered colours while My Bobby Dazzler put in a vastly improved performance from the last time he was seen on a racecourse.

Having won the previous race, Fran Nimmo’s runner Red Buccaneer was all the rage in Division II, but the 5-year-old unraced son of Black Sam Bellamy had to settle for second spot behind Stan Rawlins and Harriet Waights mare Fleur du Pommier who finally won a race at the seventh time of asking.

Edwards’s mount led at the second from home from Nicky Sheppard and Milo Herbert’s newcomer Organised Solution with Red Buccaneer back in third, but the latter was unable to take advantage as the winner began to wander on the flat. 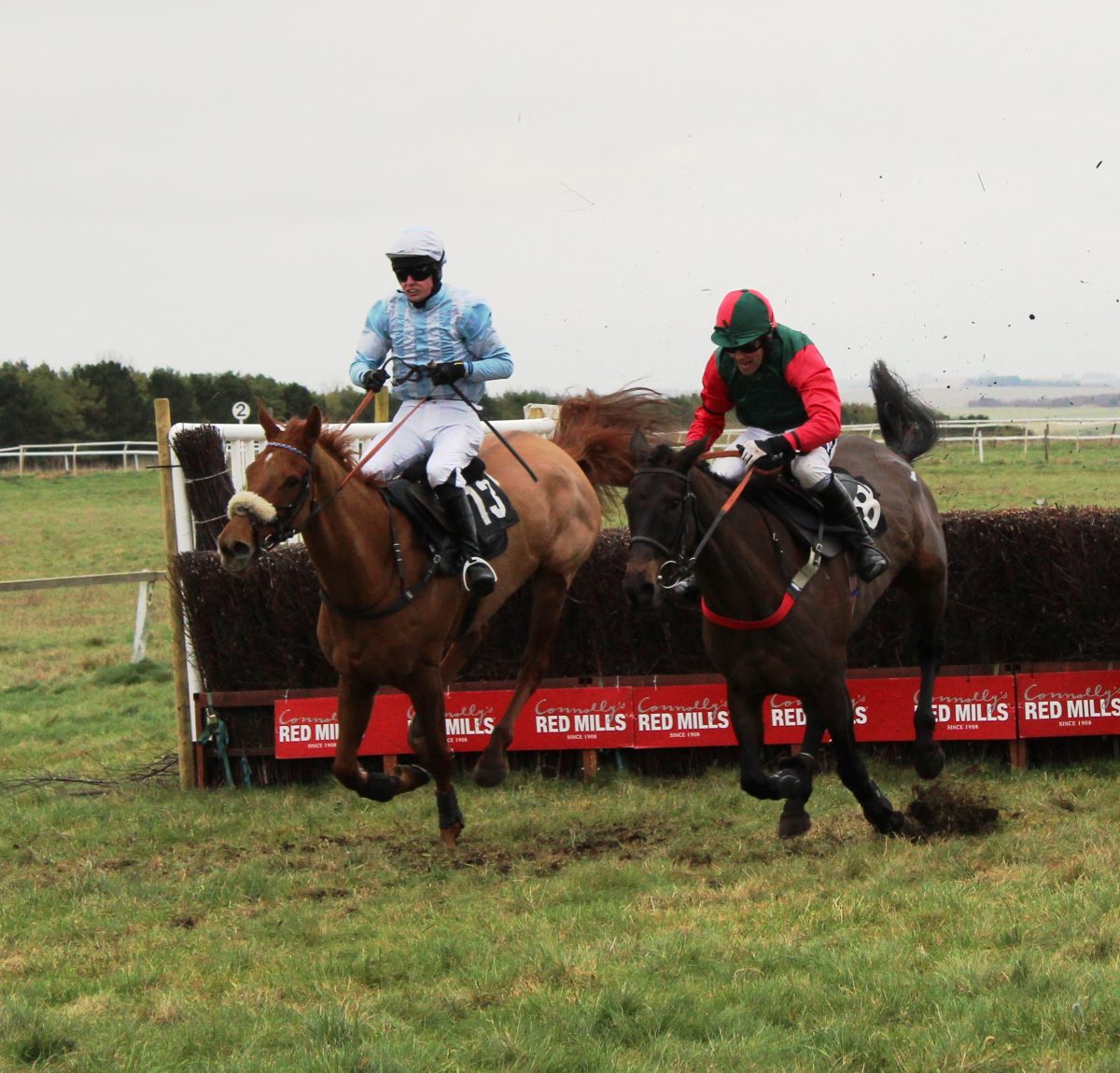 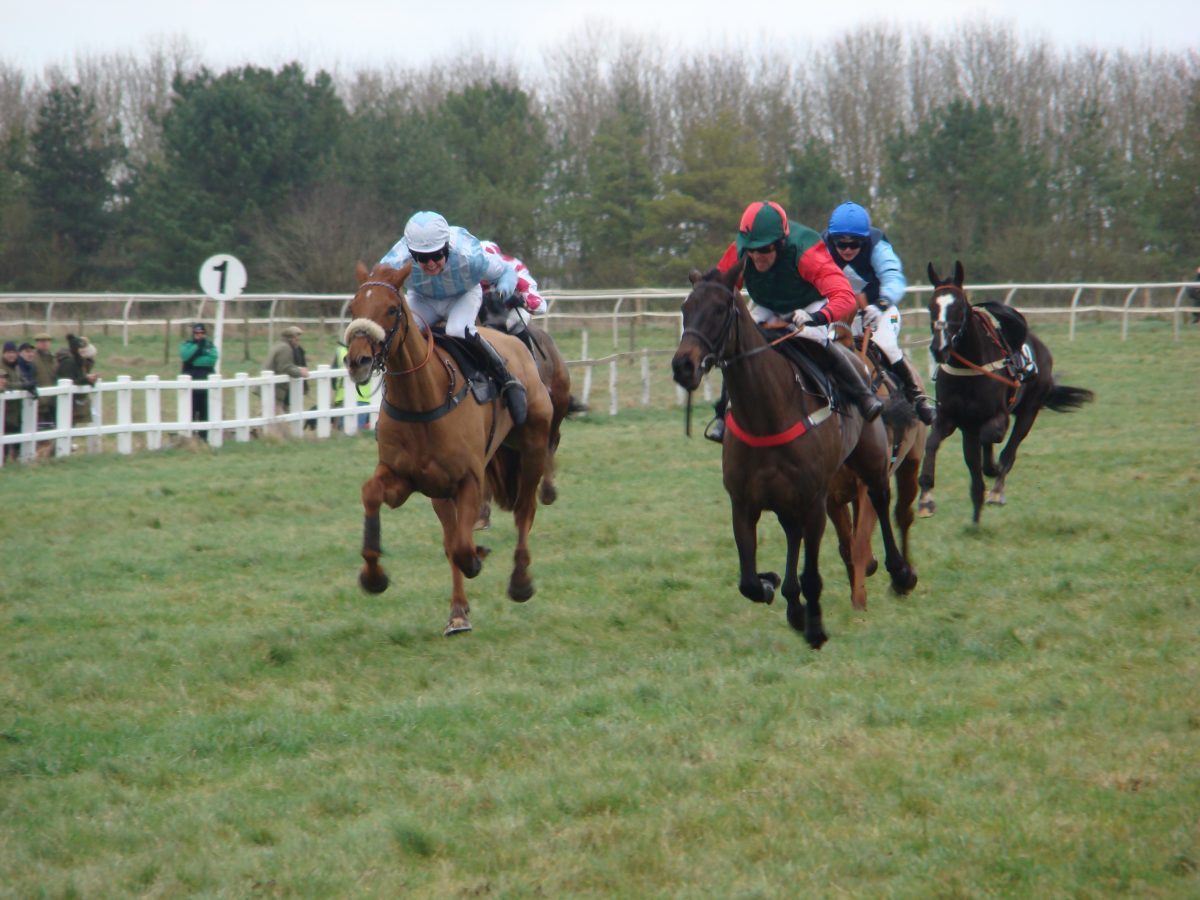 On the ratings at least the Connollys Red Mills sponsored Mens Open looked a shoe in for the favourite Shantou Flyer who had carried David Maxwell into second place in last season’s Cheltenham Foxhunters. With the owner/rider guiding Cat Tiger to victory at Plumpton Angus Cheleda came in for the ride on the Rose Loxton trained gelding.

King of Clothe, Salvatore and Green Winter were always to the fore but Shantou Flyer began a forward move coming up the hill and hit the front momentarily at the 5th from home.

Green Winter hit a flat spot at the next obstacle and dropped back about 8-lengths behind Shantou Flyer and Salvatore who were battling for supremacy.

There was little between the leaders at the last, but Shantou Flyer started to get the better of Alex Edwards’s mount on the flat. Zac Baker and Green Winter then hit full stride and made up a significant amount of ground on the run in but were still a length and a half adrift at the post. 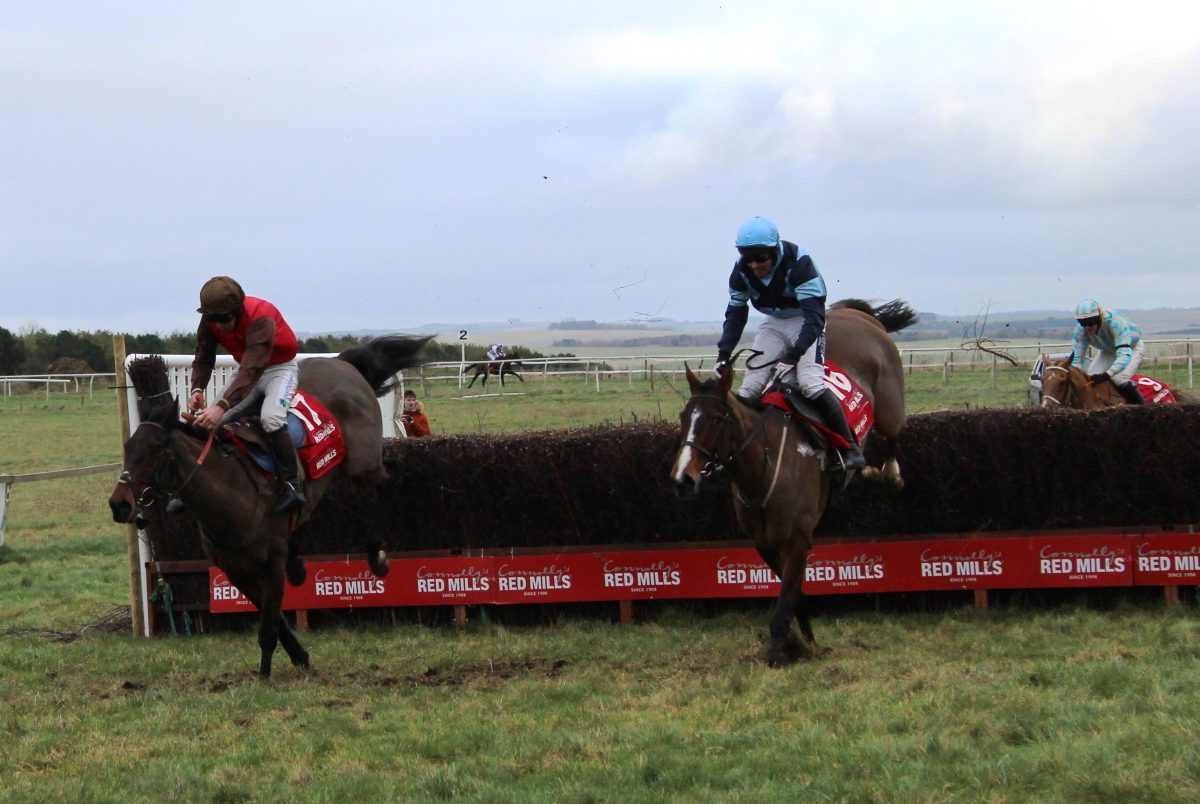 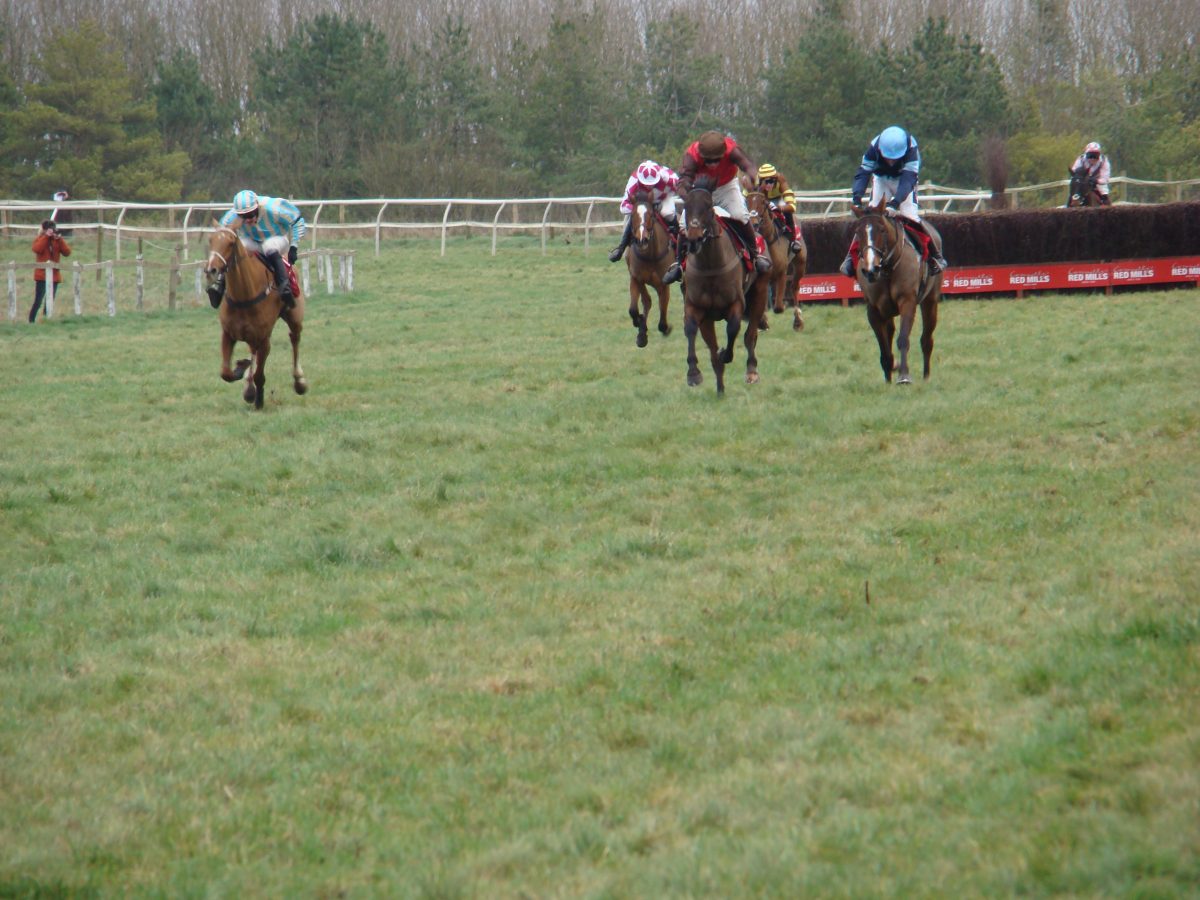 Shantou Flyer (brown and red) is level with Salvatore (blue) at the last, with Green Winter some way behind in 3rd but in the end the winner was all out to hold their challenges on the flat

The Restricted went the way of Nick Phillips on Teeton Surprise, although some of the gloss of this victory was taken off with the news that Luke Harveys runner Raised with Praise had paid the ultimate price after falling when disputing the lead at the penultimate.

Albi Tufnell and Risky Gold were still a few lengths behind in third when they were brought down but it is doubtful, they would have been able to reel the leader in.

Tufnell gained compensation 35 minutes later when he took the Novice Riders on My Murphy.

Mary Vesty’s Darius des Bois had pulled up at Ffos Las while My Murphy had refused behind Wishing and Hoping at the same venue, although in their defence conditions were really testing that day.

Paige Topley sent Vesty’s runner to the front passing the judge for the first time and her tactics on Darius des Bois were causing problems for their rivals and this partnership held a clear lead as they came back into view.

Front runners seemed to have difficulty getting home in the soft ground and that proved the case in this race as the chasing pack began to close with half a mile to run.

My Murphy was noted making steady progress and he had the leader in his sights as they negotiated the penultimate. Tufnell allowed the 14-year-old veteran to stride clear on the home bend and soon had the race in safe keeping. 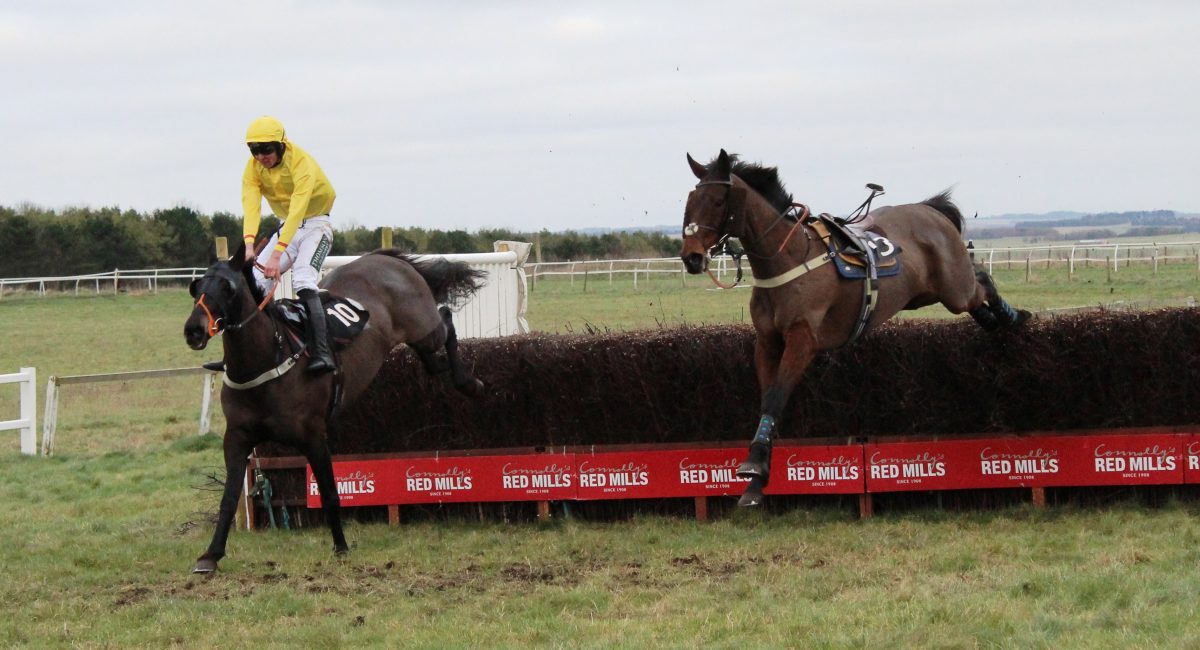 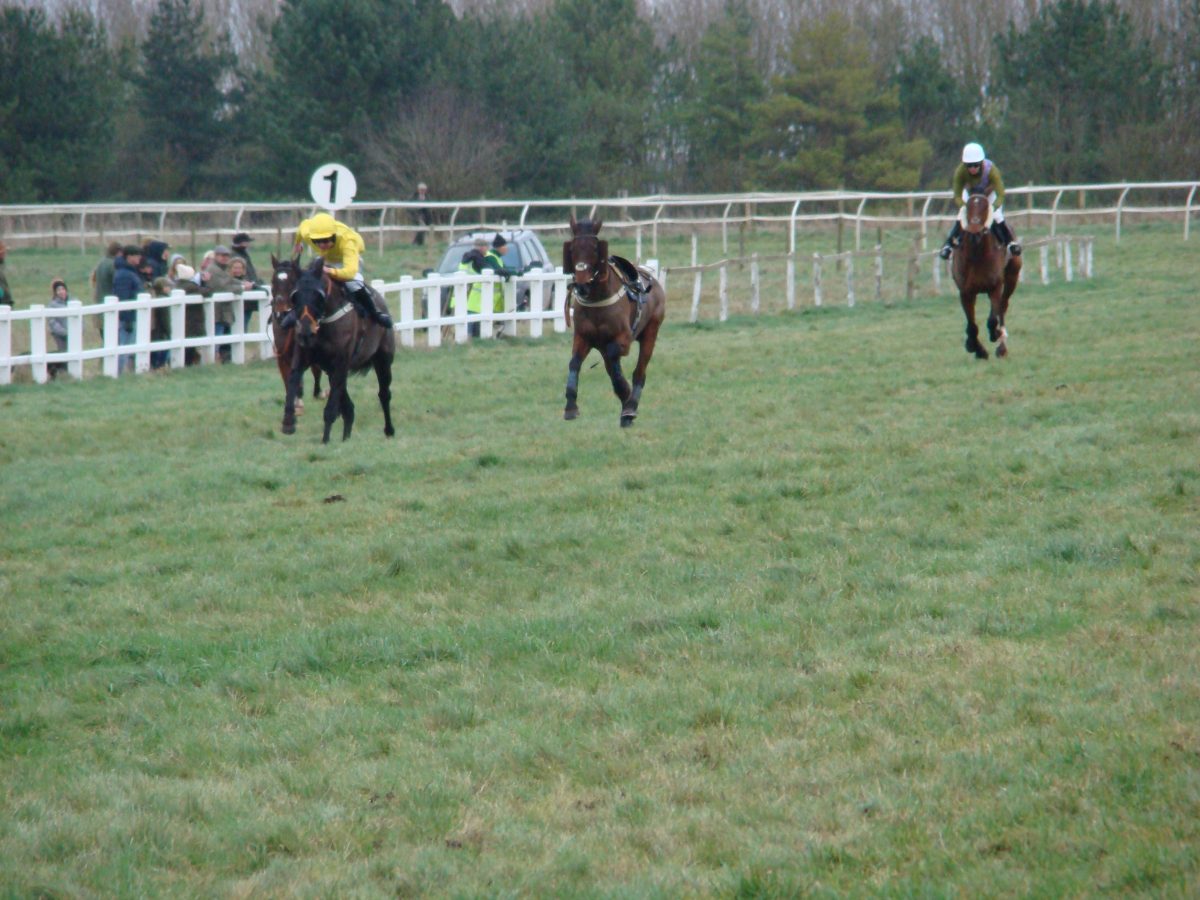