You Are Here: Pointing West Midlands > Reports > HARKAWAY CLUB MEETING SETS THE STANDARD FOR THE REST OF THE SEASON
Thursday, 26th Nov 2020

Ciaran O’Brien is listed as the owner/trainer of Hudson Yard who galloped to an impressive victory in Division I of the 2-1/2 mile Maiden during Friday’s Harkaway Club fixture at Chaddesley Corbett.

However, he revealed afterwards that Sir Anthony McCoy has been responsible for the horse’s preparation since she came over from Ireland two months ago.

With his Lambourn based Breaking and Pre-Training business entering one of its quieter periods a decision was made to see if they could be competitive on the Point-to-Point scene and that venture got off to a flying start with Hudson Yard’s success on her racecourse debut.

O’Brien and McCoy have extensive contacts in Ireland and that resulted in the 4-year-old filly joining their fledgling enterprise. Unfortunately, due to prior commitments at Leopardstown the 20 times Champion Jockey was unable to travel to the Worcestershire venue but was made aware of the success immediately after the race. 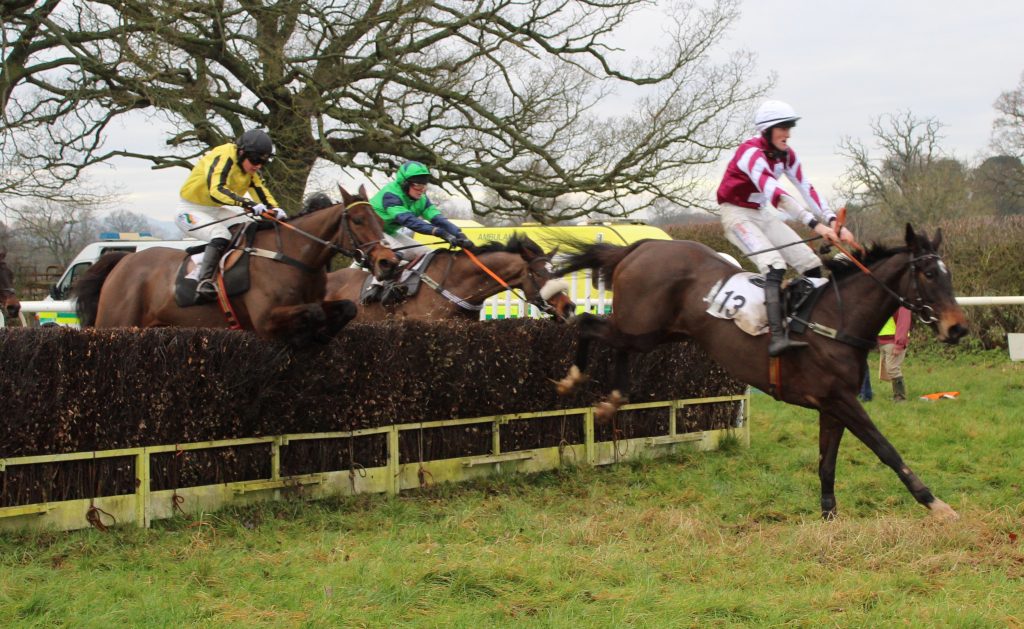 The filly was holding the challenge of General Arrow in the home straight, however Ericsbar was still in contention when he hit the top of the final obstacle although Hudson Yard was in full control at this point and it is doubtful if that fall made any difference to the result. 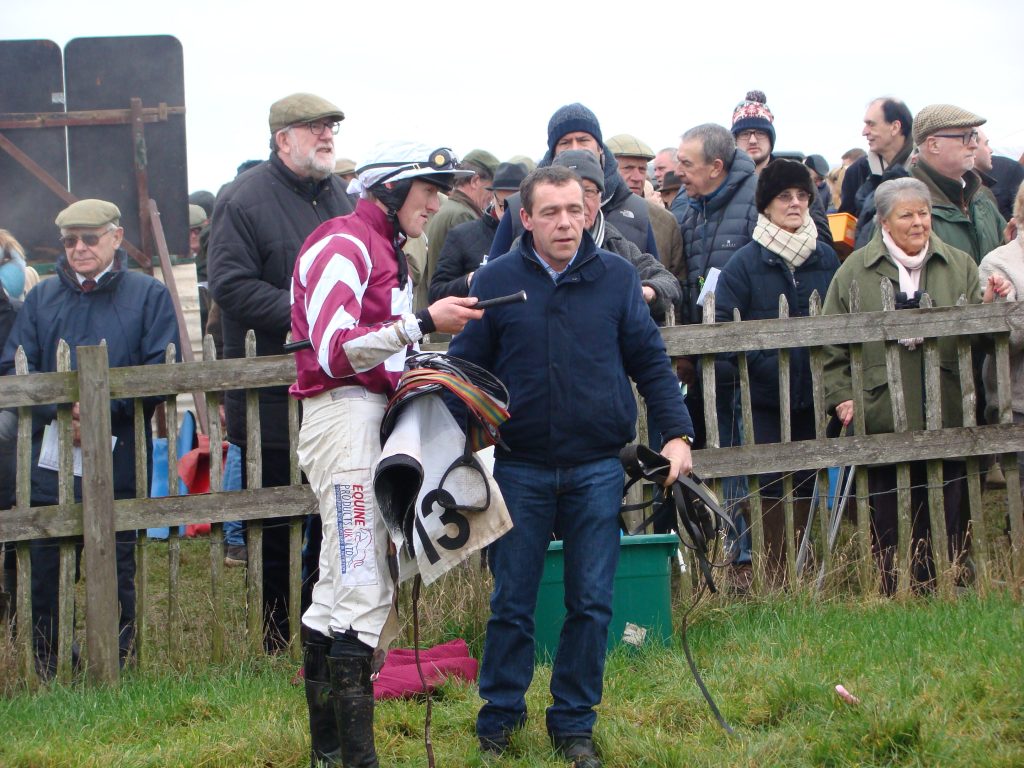 The meeting started on a good note for local stables when Immy Robinson steered Myoldman to victory in the Restricted. Buffalo Sabre and Zac Baker hit the front on the final bend and looked set for victory before Miss Robinson produced Myoldman with impeccable timing between the final two fences.

3-lengths down at the penultimate she had the winner on level terms at the final obstacle and stayed on dourly to claim the lead halfway up the run in. 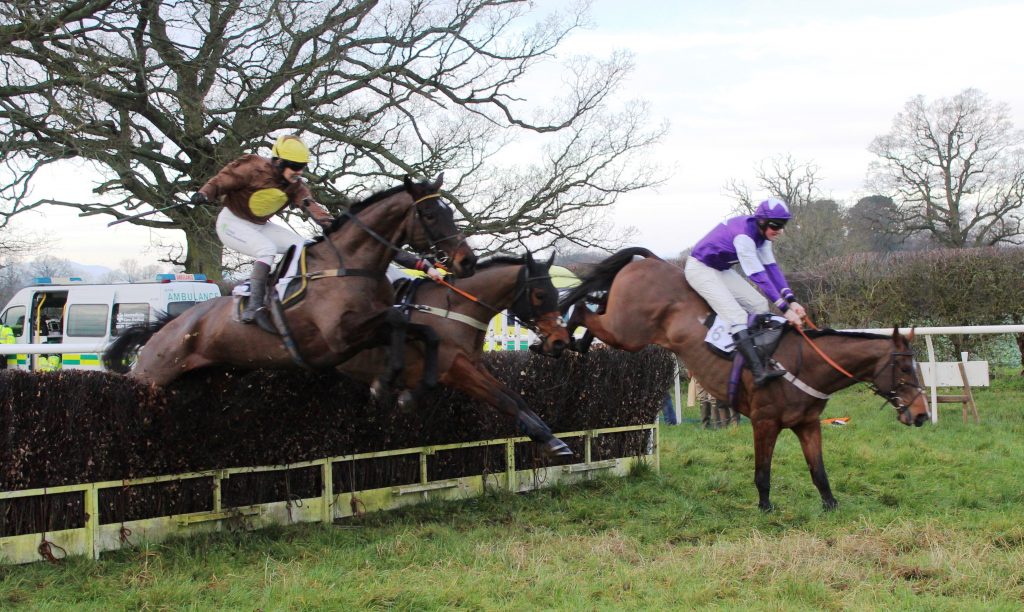 Immy Robinson gets the season off to a good start to land the Restricted on Myoldman, catching the leader Buffalo Sabre (purple) on the run in

Successful in an Irish Maiden in April 2018 he was sold for a modest sum at Goff’s the following month. He now runs in the colours of Robinson and her co-owner Rob Martin and is trained by the rider’s mother Caroline at Sheriffhales near Telford (check) 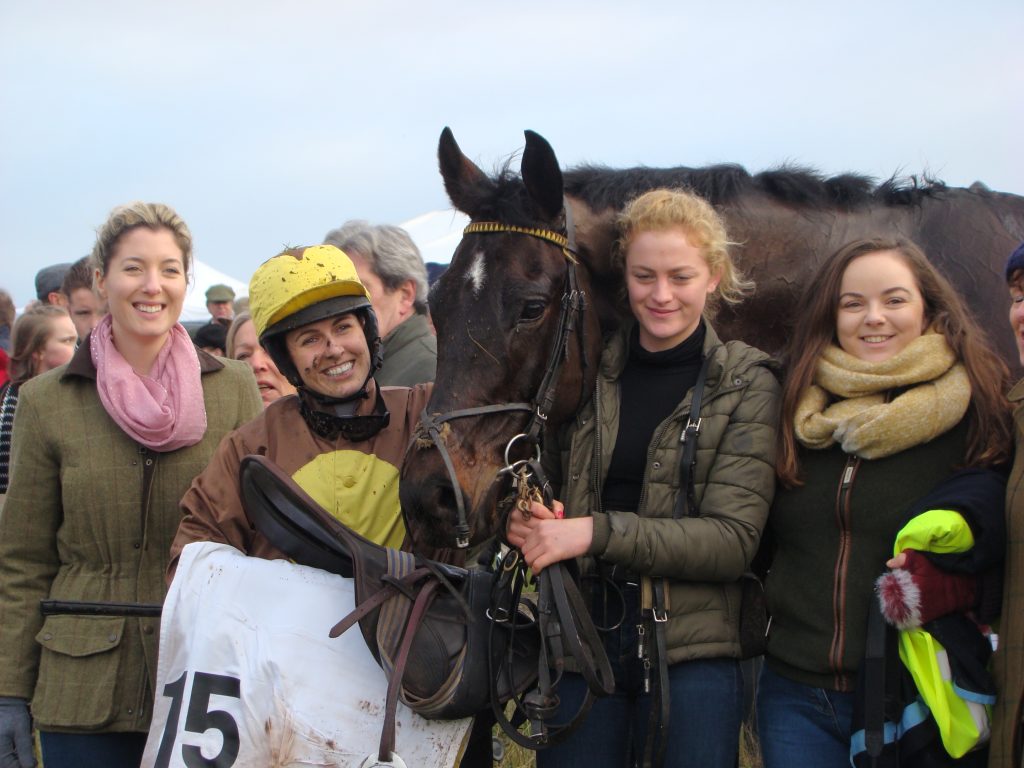 All smiles in the winners enclosure after Myoldmans success

The Ladies Open produced a top-class finish between three top class horses. Golden Tobouggan and Arthurs Secret were vying for the lead as the field went out onto their final circuit, with Virak close on their heels and TB Broke Her still just in touch. 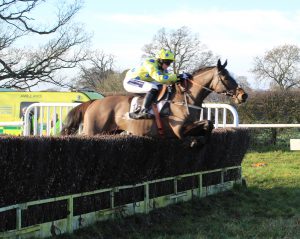 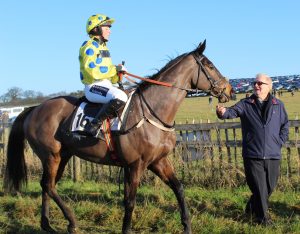 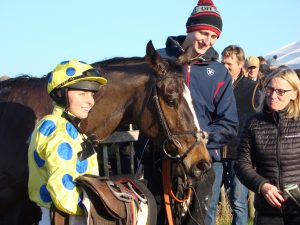 Hannah Lewis’s mount felt the pressure soon afterwards while Arthurs Secret began to struggle as the leaders turned back towards home. Claire Hardwick and Golden Tobouggan looked to be getting the better of the argument with Virak but Natalie Parker’s mount showed his class as he forged clear between the final two fences and had a 6-length advantage as they passed the judge.

The winner is trained by Somerset based Rose Loxton but is owned by Upper Welland businessman Clive Hitchings. He explained afterwards “The horse had good form under Rules but is only small and struggled to concede weight to his rivals, so we decided to send him Pointing”.

Reigning Champion Rider and trainer Alex Edwards and Phil Rowley rarely leave this meeting without a winner but had to wait until late in the afternoon before Hazel Hill prevailed in the Mens Open.

The 10-year-old has only been beaten once between the flags but Enville based owner Diana Williams and Morville trainer Phil Rowley took their time before deciding to let Hazel Hill take his chance.

Always on the Run set the early pace and was still in front on the final climb but his effort petered out as the favourite took the lead on the home bend.

Petrou then made his bid for glory but the winner forged clear between the final two fences and quickly opened up an unassailable lead. 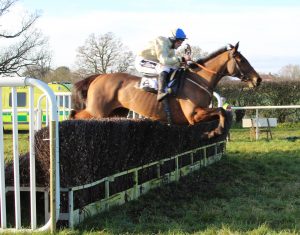 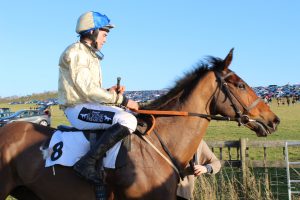 Hazel Hill outclasses his rivals in the Mens Open

Mrs Williams, along with Judith Healey and Jen Hancox are all stalwarts of the Harkaway meeting and Point-to-Pointing in general so this proved a popular success.

Before Hazel Hill’s victory Edwards and Rowley had suffered several setbacks most notably when Levasseur could not peg back Tiger Sun in Division II of the short Maiden and later in the afternoon Sego Success had to settle for second spot behind Risk a Fine in the Conditions.

Tigers Son was always in the vanguard but had to face a strong challenge from the favourite over the final two fences but had sufficient reserves to hold Levasseur’s renewed effort on the flat. 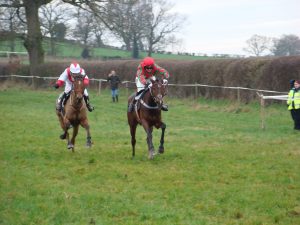 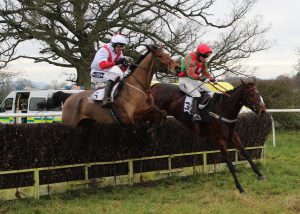 This success was the first leg of a double for Warwickshire rider Gina Andrews who has won the National Ladies Riders Title for the last four seasons and is already staking her claim for a fifth.

Her second success came in the final race of a long day when Classico Dais clung onto his lead to claim the 3-mile Maiden.

Tom Tom Turnaround led for most of the contest but weakened dramatically on the final turn and as they straightened up for the judge it became a straight fight between Classico Dais and the Worcestershire qualified Round Robin. 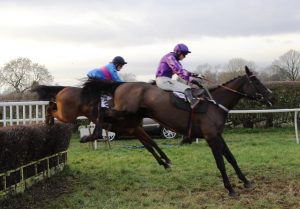 The former got first run but Round Robin who has been placed on numerous occasions in the past refused to accept defeat and inched closer all the way up the run in before going down by a neck.

Nineteen horses lined up for the Conditions but most of them may as well have stayed at home because James King took Risk a Fine to the front from the start and they saw off all challengers to land the spoils for owner Steve Whistance and trainer Gareth Moore.

The winner was given an enterprising ride by King. They looked vulnerable when Sego Success challenged early in the home straight but he struggled to get on terms over the final two fences. 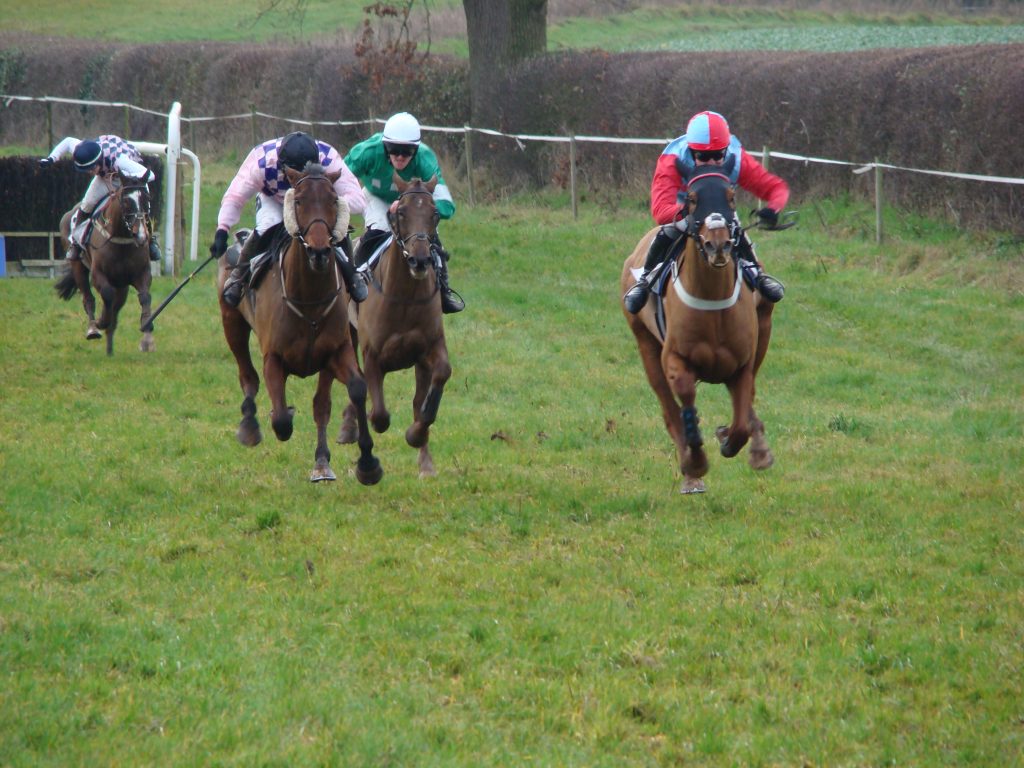 Luca Morgan landed the Novice Riders on the Johnny Farrelly trained Portrait King to win the Hanley Mills Award for the best performance by a Novice Rider. The 25-1 outsider had a protracted battle with the well supported Summer Sounds throughout the final mile, with the latter holding a fractional lead at the penultimate but Portrait Kings stamina proved crucial in the closing stages. 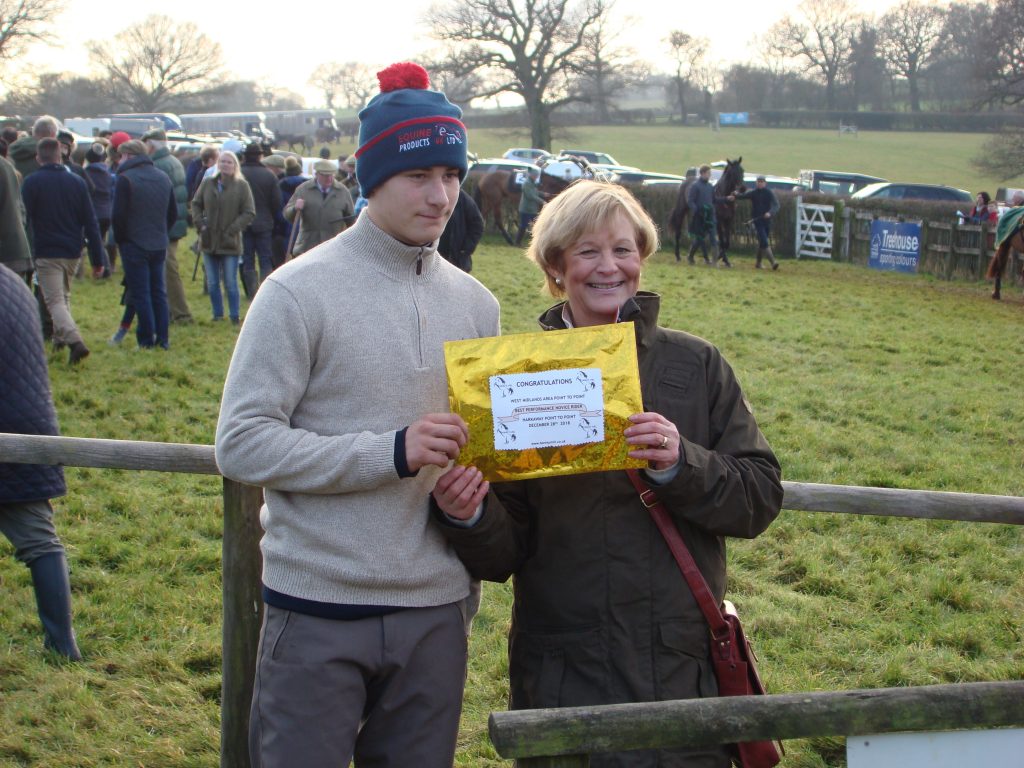 Prior to the Christmas break the Carmarthenshire held their re-arranged meeting at Fos Llas.

After assessing the entries at that meeting and Chaddesley Corbett, trainer Jake Slatter persuaded his parents that a trip to Wales might prove beneficial. That proved a wise decision with Bally River Boy making all and extending his advantage from the 15th to come home for an easy win.

The sport as a whole and the West Midlands Area in particular will be [..]
More info

LATEST PLANNED FIXTURE ARRANGEMENTS TILL THE END OF THE YEAR

After yesterdays release of planned fixture arrangements up to the end of the [..]
More info