Even the most hardened racegoer must have been tempted to use the heated picnic tent as incessant rain tested the stamina of all participants during Sunday’s Heythrop Point-to-Point at Cocklebarrow.

Having fallen throughout the meeting the wet weather finally relented as the large crowd were making their way home. The course did well to cope in the circumstances but the tented village and car parks quickly turned into a muddy morass.

The Smith Maxwell family have always been staunch supporters of the sport and the West Midlands Area in particular and most of their extended family and friends were on hand to greet Sausalito Sunrise after that horse’s success in The Lord Ashton of Hyde Trophy.

The Well Road and Warden Hill set the pace but both began to beat a retreat with three quarters of a mile to run and this was where both Sausalito Sunrise and the Mary Vesty trained Marten made their bid for glory.

John Smith Maxwell kicked again approaching four out and that move proved decisive as they quickly began to draw clear of their weakening rival. The partnership had the race in their pocket approaching two out and had little difficulty staying clear of their remaining rivals as they raced towards the judge. 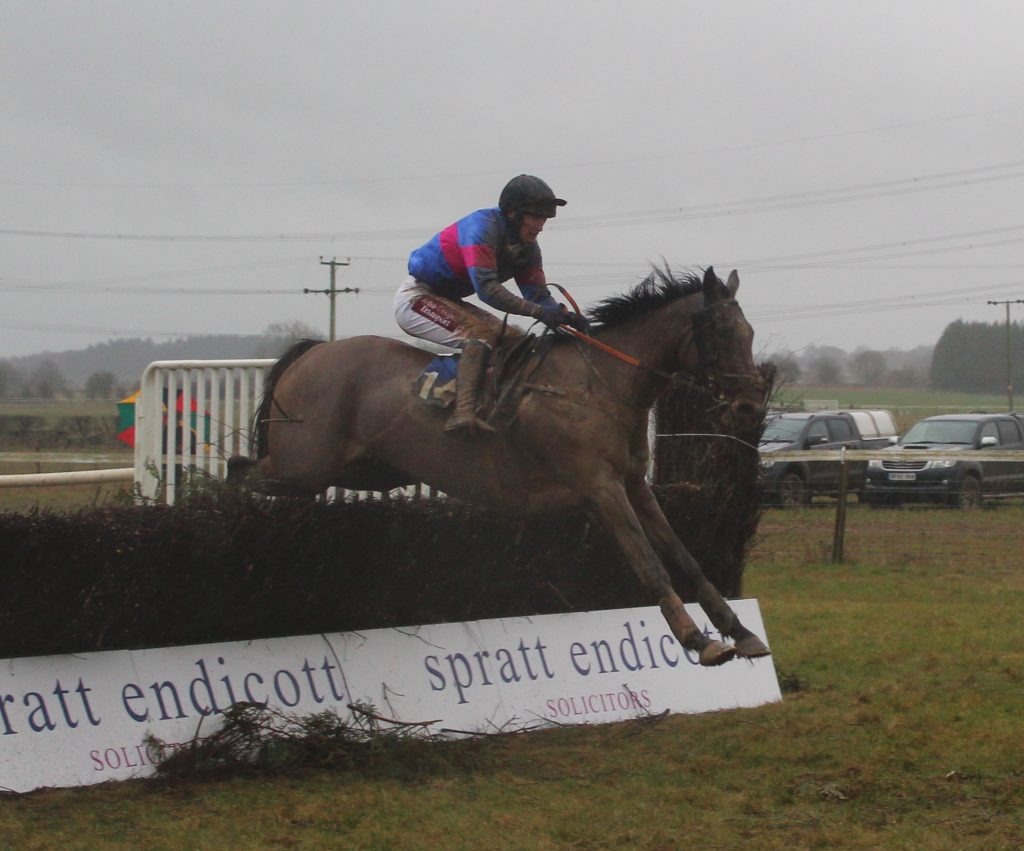 The 12-year-old carries the colours of Worcestershire based Katherine Smith Maxwell but is trained in Somerset by her daughter Alex Dunn, who said afterwards “We came her 2 years ago and liked the course and the way the meeting was run so promised if we had a nice horse we would come back. It is lovely to win one of the Point-to-Point Classic Races, as I would not be where I am today without the sport. I have no major plans for him”. 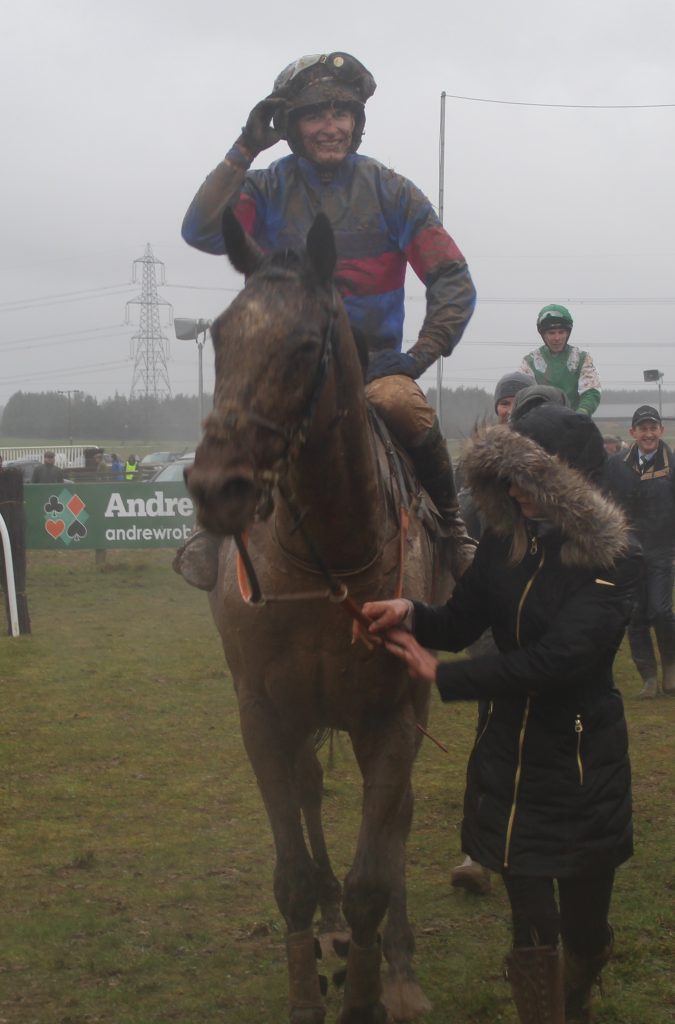 The trainer’s brother and owner’s son John who guided the horse to victory described conditions “as bottomless – but it is wet enough for horses to go through it. This is definitely my best win in Point-to-Points”. 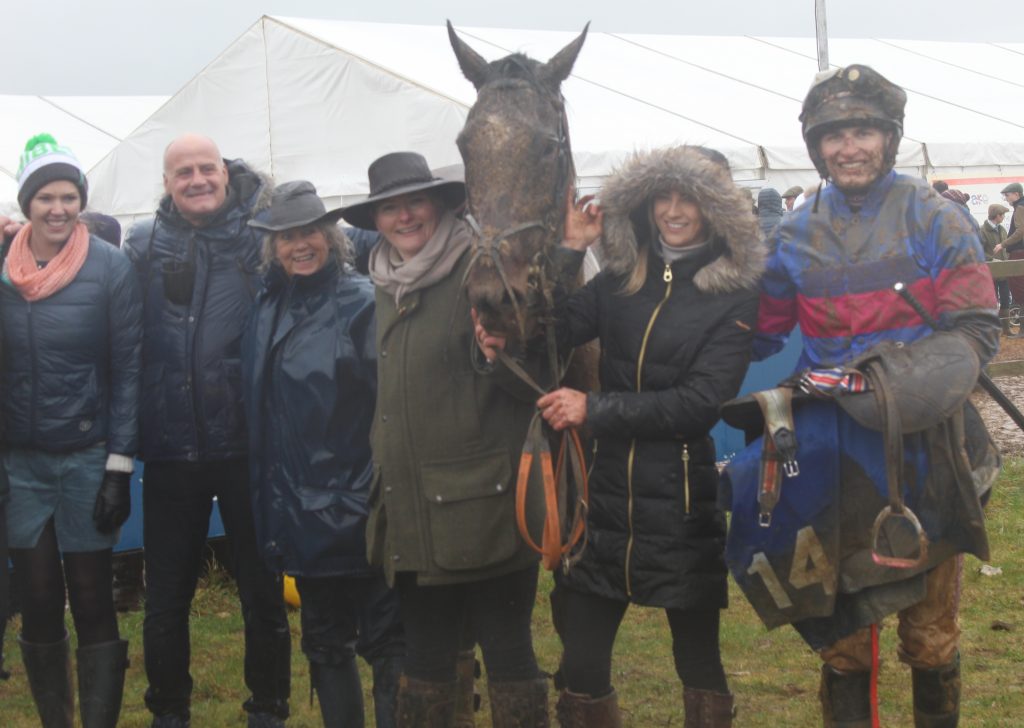 Part of the winning connections

Mrs Smith Maxwell’s sister Christine Banks and her daughter Josephine had hopes of taking the Skinners sponsored Ladies Open with Diamond King with the 12-year-old odds extended as the Sally Randall trained Barney Dwan came in for significant support just before the off.

At the halfway point the leader Sonneofpresenting was challenged by the favourite and these two had a significant advantage over Diamond King who was 20-lengths adrift and showing no signs of reducing the deficit.

Hannah Lewis and Barney Dwan maintained their advantage down the back straight but could not shake off Sarah Rippons mount, however with half a mile to run the favourite began to ease clear and turned back towards home with the race at his mercy. A slight mistake at the last was the only blemish on an otherwise faultless round. 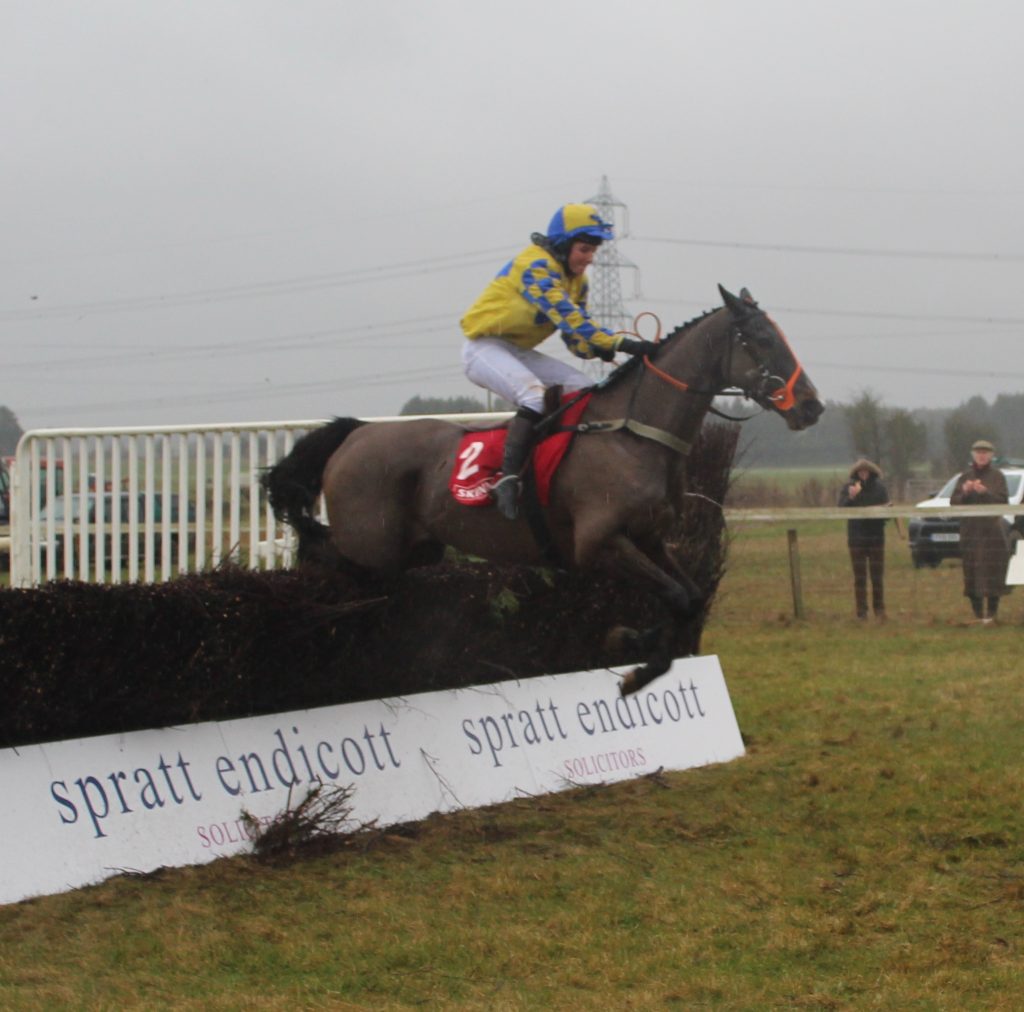 Not foot perfect as they clear the last, but Barney Dwan gallops on to victory in the Lyon Trophy

Questioned as to why the horse had taken the Pointing route winning trainer Sally Randall explained “He lacks a little bit of size to make a chaser but has massive ability, and we wanted to see if we could get his “mojo” back. He has been flying at home. He came from the Rooney’s but his new owners Matt and Sally Burford love their Pointing so we should have lots of fun with him. He has improved massively for the change in scenery since we moved and our new gallop is sensational”. 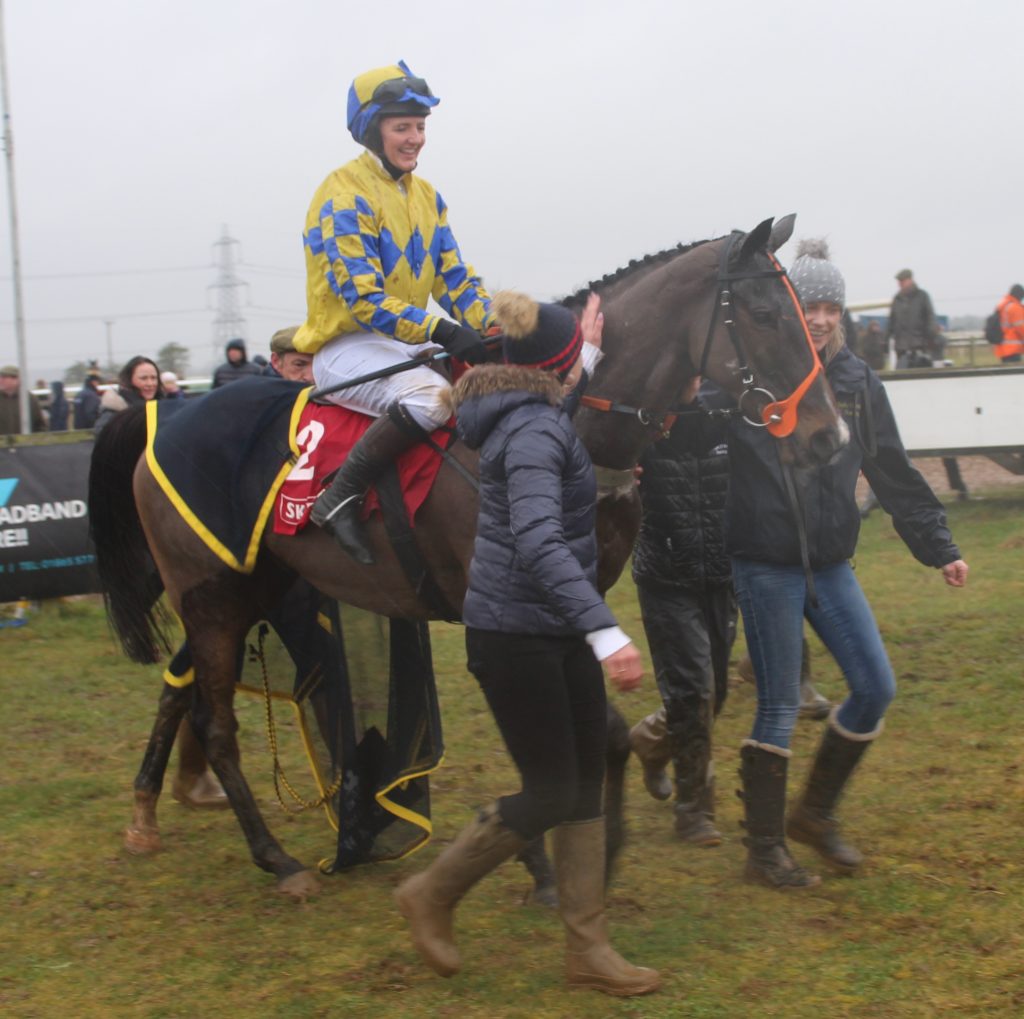 Hannah Lewis is smiling after Barney Dwan had outclassed his rivals

Randall’s partner Fergal O’Brien used to occupy the top yard at Grange Hill stables in Naunton prior to his move to Ravenswell, but its new occupant Willy Twiston Davies sent out his first winner in his own name after Panic and Run ploughed through the mud to land the closing 3-mile Maiden.

With the mist hindering visibility on the far side of the course Spivey Cove and Doncesar de Pretot could be seen making the best of their way home but the leader fell at the 16th which hampered the favourite who then parted company with his rider.

Cranbrook Causeway was left in the lead at this point but were passed by Finn Lambert and Panic and Run who came home unchallenged to provide Lambert with his very first winner. 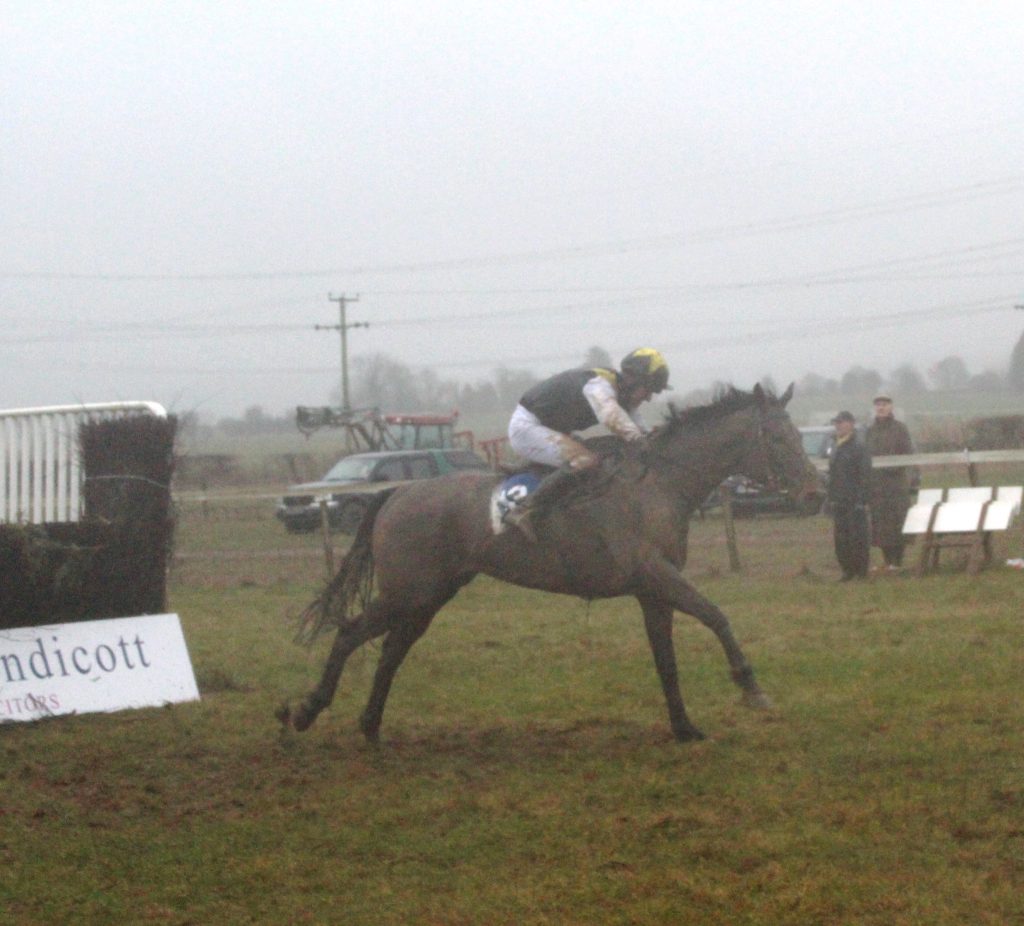 Panic and Run has been plying his trade under Rules with Oliver Sherwood, Henry Daly and most recently with the current owner’s father Nigel. Not many runners got into the race and the two departures helped the winners cause so it will be interesting to see what he can achieve when upped in grade.

After spending last season with Sally Alner, 17-year-old Liam Harrison made the move to Fergal O’Brien’s who has provided the young rider with winning opportunities under Rules and continues to gain experience between the flags.

Risky Gold was brought down when making progress at Larkhill recently but gained compensation with a hard-fought victory in the Restricted. The 7-year-old was produced with impeccable timing by Harrison to take the lead off the home turn but was chased all the way up the home straight by the long-time leader Tinnehinch, Gold Time, Schiap Hill and the improving Family Man. 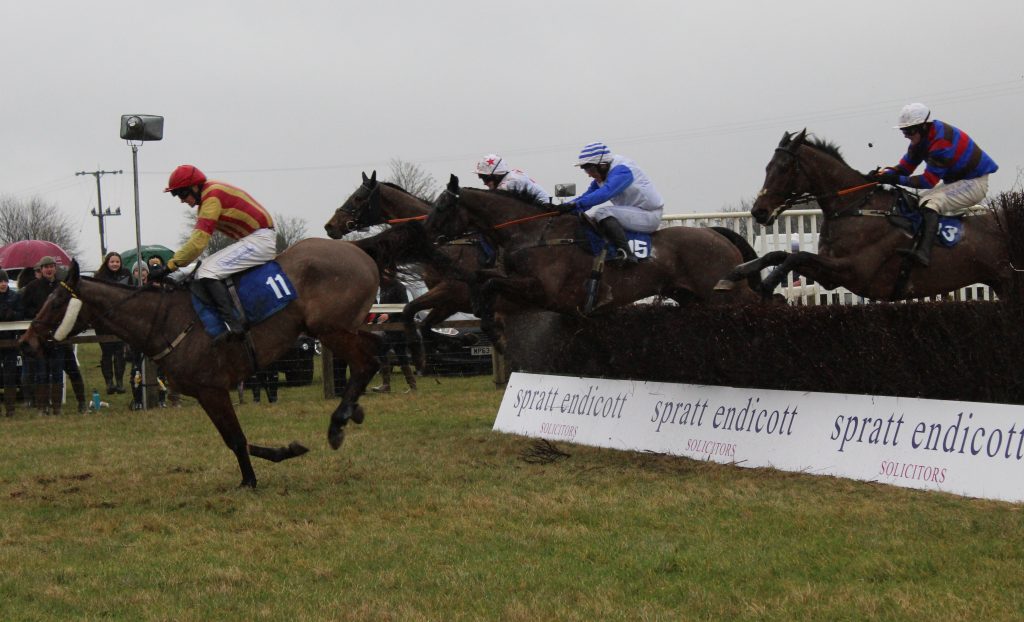 All five horses were in with a chance at the last but in a blanket finish Risky Gold gained the verdict by a neck from Tinnehinch with the fast finishing Family Man a head away in third.

This was another winner to come from a stable based in Naunton. Owner/trainer Linda Delahook explained how the horse came into her care “I am very lucky to have him, as he is on loan from Chris Coley, who thought he would benefit from the Pointing experience. He is the only horse I have, but I have some who are out of training and resting. I think we will continue Pointing for the time being and he will probably go to Chaddesley or Larkhill next”.

Earlier in the afternoon Harrison had taken the Members on Chris and Fran Marriott’s Pomme de Nuit, but it could so easily have been a winner for the Naunton stable of Max Comley. James King and Pauls Hill had taken the lead at the 10th and they opened up a clear lead down the back straight and were still well clear when the rider was blundered out of the saddle at the 3rd from home. 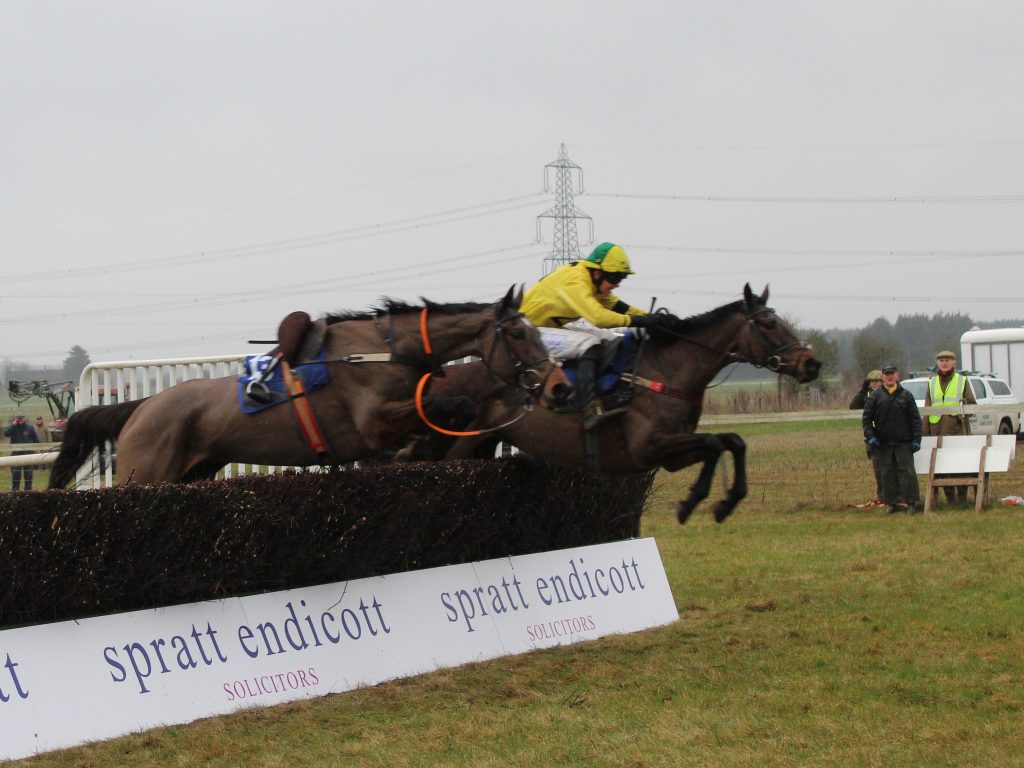 Pomme De Nuit got the better of Cadeau George in the closing stages and that provided an appropriate winner for Chris Marriott who is retiring after 35 years as the meetings secretary and also added another chapter to the Marriott’s successful “Apple” dynasty. The favourite Cheltenham de Vaige ran too freely on the way to the start and may have lost his chance in the preliminaries.

The first fence in the home straight became something of a bogey fence for King as it robbed him of another potential victory in the 2-1/2 mile Maiden later in the afternoon.

Two newcomers Complete Unknown (Gearoid Costelloe) and On the Platform (Fran Nimmo) were back to the exclusion of most of the other runners. The former departed earlier in the race while On the Platform was coming through to win his race when he parted company with his jockey at the same obstacle and that allowed long-time leader The Golden Rebel to claim the race at the expense of Smoking Pigeon.

Nick Phillips is Clerk of the Course at Cocklebarrow, whilst the booking of Paige Topley who had ridden Darius des Bois in the past should have been a pointer to Azure Fly’s chances in the Novice Riders.

Anybody making that judgement was rewarded as these two horses had the race to themselves in the home straight with Azure Fly’s relentless gallop landing the spoils for The Kilkenny Racing Partnership which has Phillips at its head. 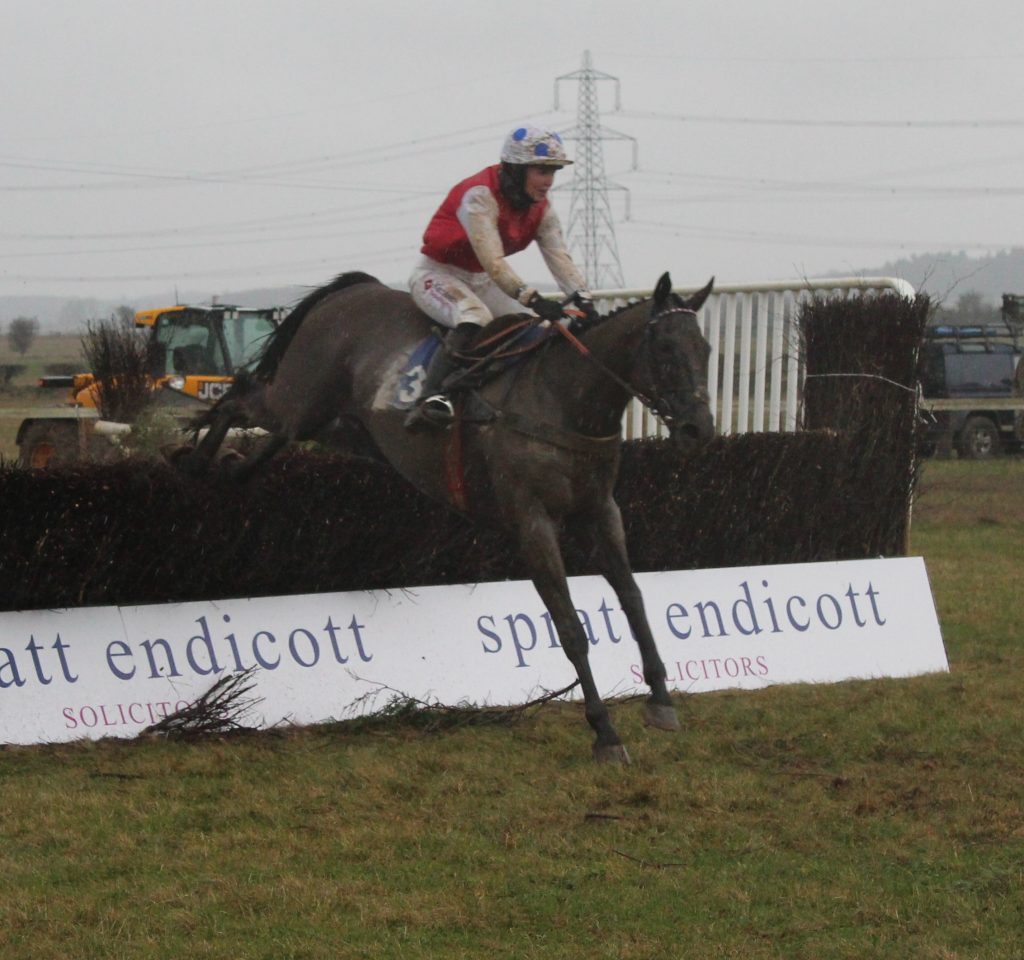 While Family Man finished a fast finishing second in the Restricted, that horses connections did get some compensation when stablemate Don Bersy regained the winning thread under Sam Brown in Novice Riders at Thorpe Lodge. The partnership easily justified their odds-on favouritism with a comprehensive defeat of Distime.

Two horses qualified with the Croome & West Warwickshire made the long journey over the Higham in Suffolk.

The Nick Pearce trained Workbench provided Murray Dodd with his first winner after the jockey sent his mount into a race winning lead at the 12th.

Alexandra Knight and Knockoutloaded had finished second to Ravished at Cottenham a few weeks ago and showed that effort was no fluke by taking the Skinners sponsored Ladies Open. Top Smart was challenging when he departed at the second from home and the leader then had to show a battling spirit to hold off the fast finishing Brackloon High.

The Mares Maiden at Chipley Park went the way of the Beaufort qualified Minella Beag with Will Biddick steering her to victory for Ed Walker.

Judith Healey and Nickie Sheppard have been able to secure donations from the following [..]
More info