With the loss of meetings in adjoining areas and with other venues further afield suffering the same fate, there was a mini invasion of West Midland horses during the Countryside Alliance meeting at Badbury Rings on Sunday afternoon.

This part of Dorset has fared much better than a majority of the country where very soft ground has been prevalent since the start of the season, so visiting trainers and jockeys were full of admiration for course conditions.

Despite journeys of up to 4 hours from their West Midland bases there was a high turnout of runners from our area and their endeavours were rewarded as they took a lion’s share of the spoils.

The Herbert family made a wise decision to team up with Eastnor trainer Nicky Sheppard when their son Milo started race riding, and Ballycahane provided them with never to be forgotten memories.

His subsequent sale meant that replacements needed to be sourced and both have fulfilled expectations. Like Ballycahane, Organised Solution started off with Arthur Moore, but has improved with every race since joining Sheppard, finishing fourth at Larkhill, second at Bangor before finally opening his account at Chaddesley Corbett. Their other acquisition Risk and Roll won a Leicester Hunter Chase recently.

Despite these strong credentials Chris Barber’s Thechaseison headed the market for Division I of the Restricted, but after figuring prominently for most of the contest, the favourite could not match his rivals exploits in the closing stages.

Thechaseison led running racing downhill for the first time and set a strong pace until harried by The Dartmoor Rose, Queens Legacy and Organised Solution on the home turn.

Organised Solution emerged from the pack and these two had a tremendous battle before Milo Herbert’s mount forged into the lead approaching the last and out stayed his rival on the run to the judge. 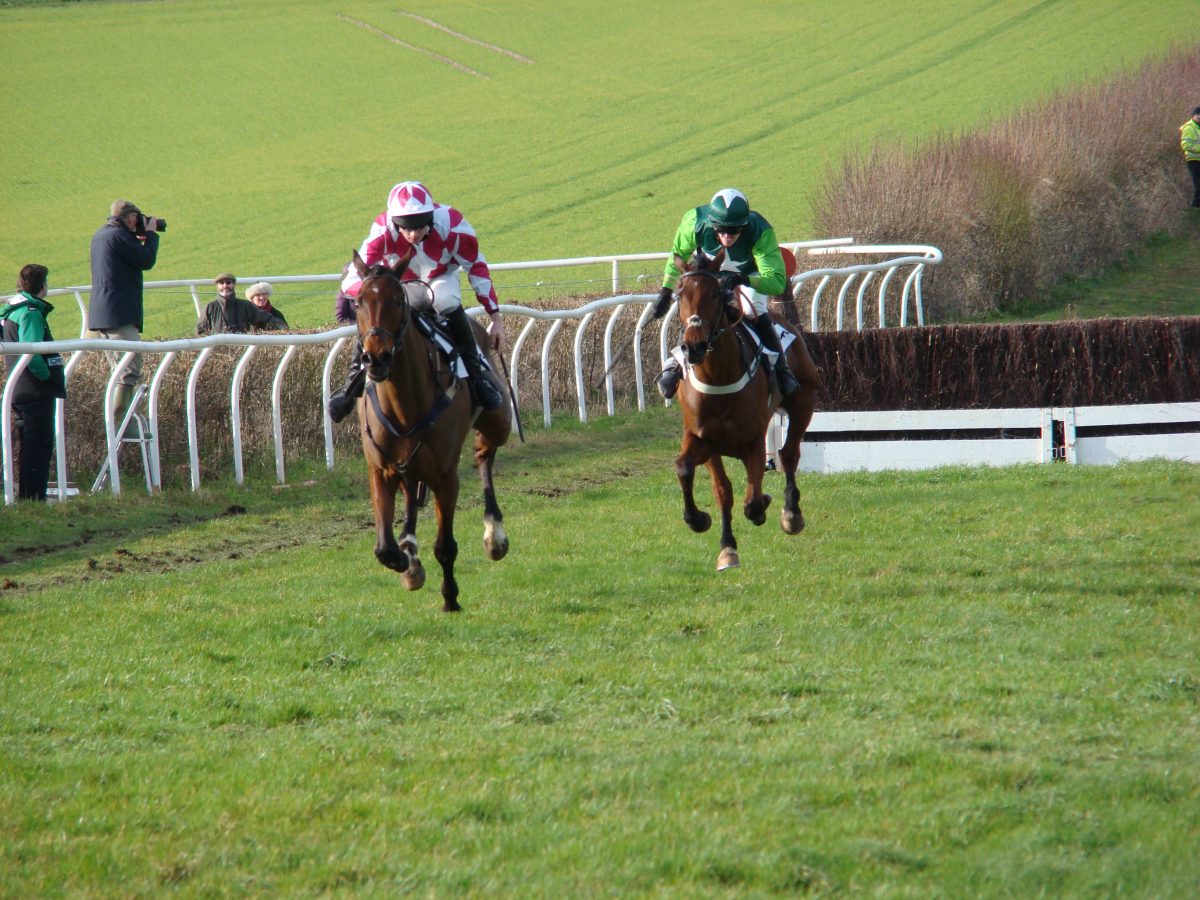 “He ran over hurdles for Arthur Moore so is race wise and battle hardened. We came down here for the ground and I must say it is in amazing condition. Milo gave the horse a good ride and is spending a year with Tom George during his gap year”, stated the winning trainer who was having her first runner at the course. 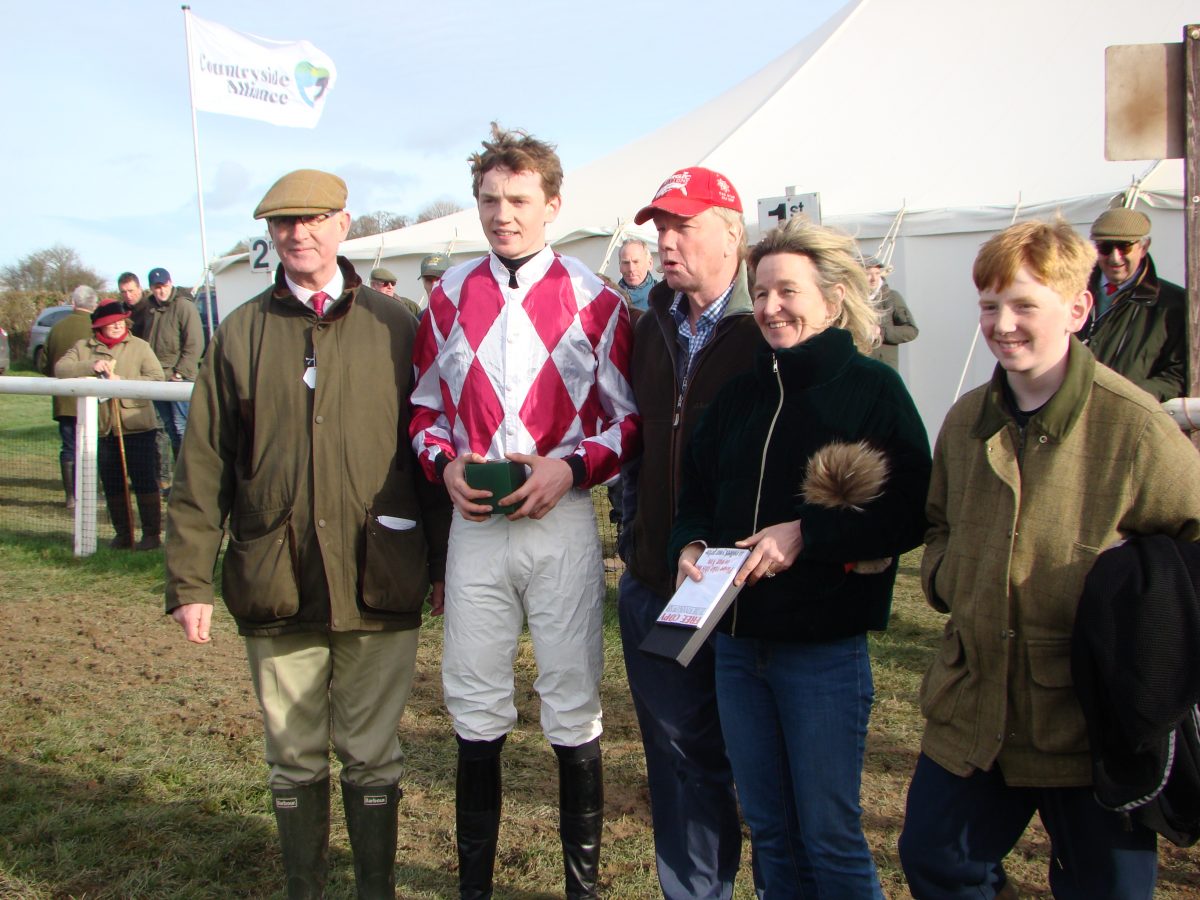 The Herbert family in the winners enclosure

Organised Solution is qualified with the Ledbury as was the winner of Division II of the Restricted No Limitations.

Lorna Vaughan’s 9-year-old finished third at Thorpe earlier in the season, but Bradley Gibbs was content to keep a watching brief as Charlie Papa Lima and Dancing Dave battled for the lead.

The pace quickened with a mile to run and half the field were still in contention as they lined up for the four fences in the home straight.

Taken by Force had his head in front at this point but was being challenged by No Limitations and Dancing Dave. Bradley Gibbs had been hard at work for some time but his efforts were rewarded as his mount came through to dispute the lead at the penultimate. 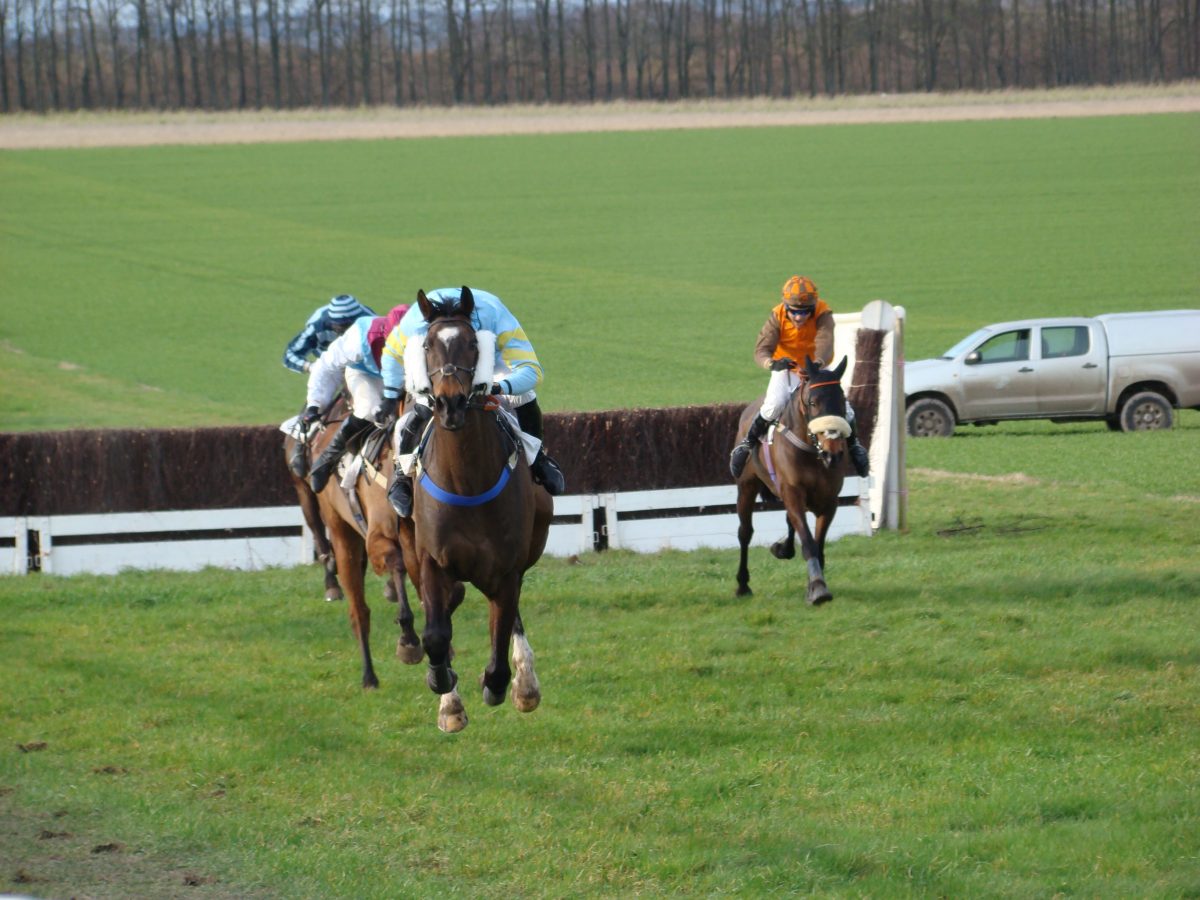 The partnership held a clear advantage at the last, but Gibb’s needed to be at his strongest to ensure his mount held the renewed challenges of his rivals on the flat.

Alex Edwards enjoyed a successful afternoon but the same could not be said of Will Biddick who aggravated a recent injury in the first race and gave up the rest of his rides.

Edwards and trainer Phil Rowley were paying their first visits to the Dorset venue and landed a double which started with Undisputed’s success in Division I of the Conditions. The mare had scored convincingly at Cottenham on the opening day of the season but still had a bit to do as Dr Rhythm led the field back towards the judge.

These two battled it out in the home straight but the mare’s cause was hampered by her tendency to jump right, so the result was in doubt until she went into a clear lead on the run in. 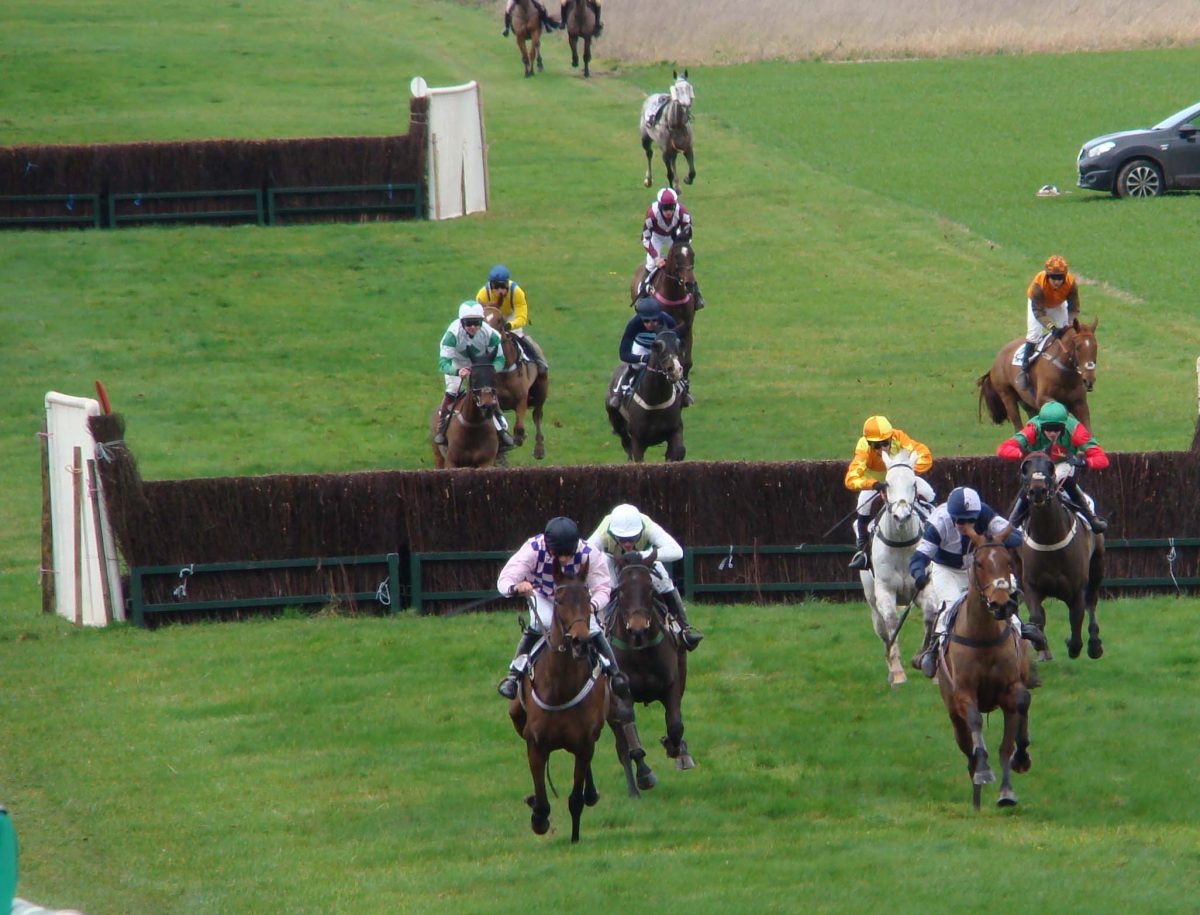 The winning trainer was another to complement the organisers on the state of the ground. “It is a 4-hour journey from Bridgnorth but we have been searching for better ground and trying to find the right race for her”.

Just over an hour later and Rowley was back in the winner’s enclosure following Champagne Lillys emphatic victory in the Mens Open.

The mare had lost her unbeaten record when falling at Cottenham and this was her first race in this elevated company.

Prominent throughout she came through to dispute the lead with four to jump. Three Faces West renewed his efforts approaching the penultimate but was fighting a losing battle over the final two fences and was 10-lengths adrift as they passed the post. 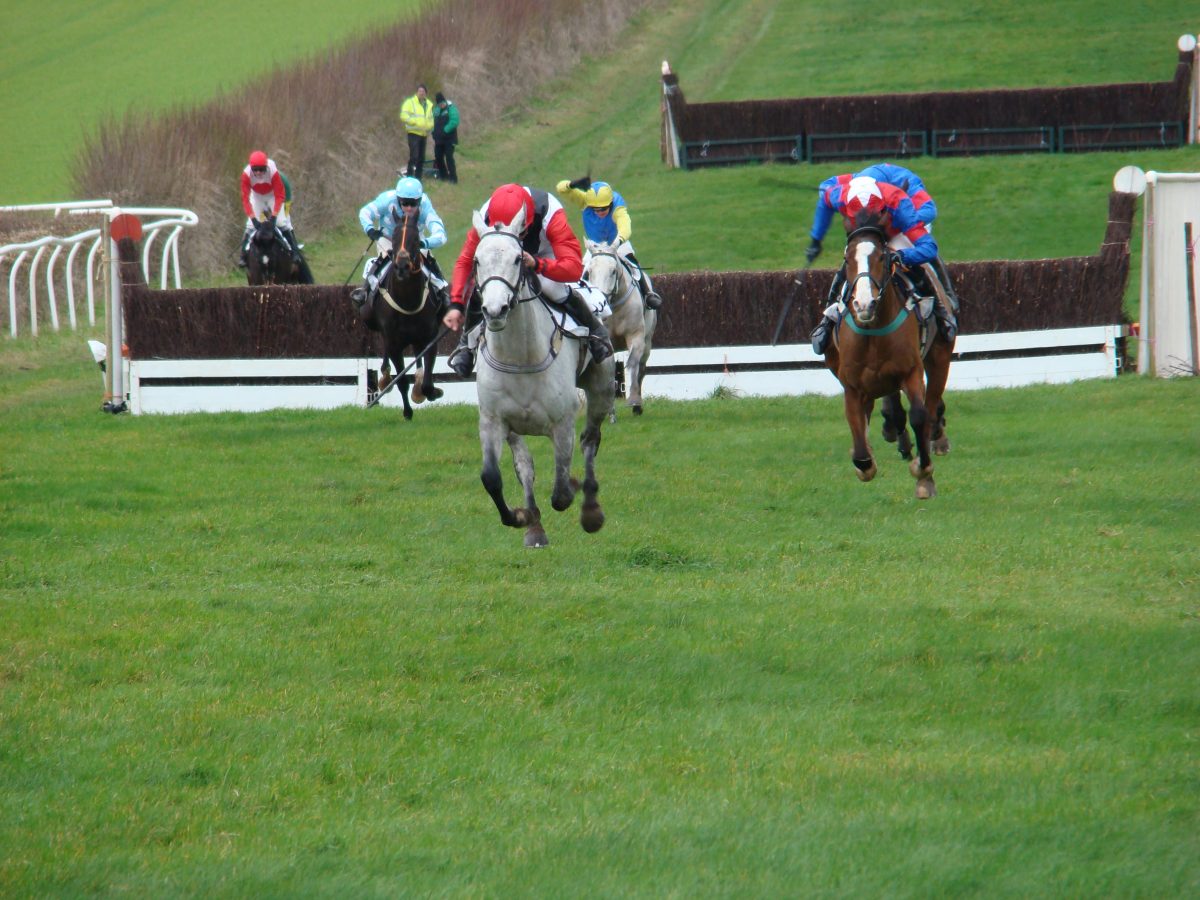 Sandwiched between those two winners Edwards hopes of a treble were thwarted by Byron Moorcroft on the Mikey Bowen trained Curious Carlos in Division II of the Conditions.

The 11-year-old had travelled from Bowens stable in West Wales and took the race by the scruff of the neck in the home straight. Edwards mount Sixteen Letters gradually whittled away at leaders advantage and it looked as though their persistence had paid off when they got to the favourites girths at the last, but Curious Carlos battled back to win by a head. 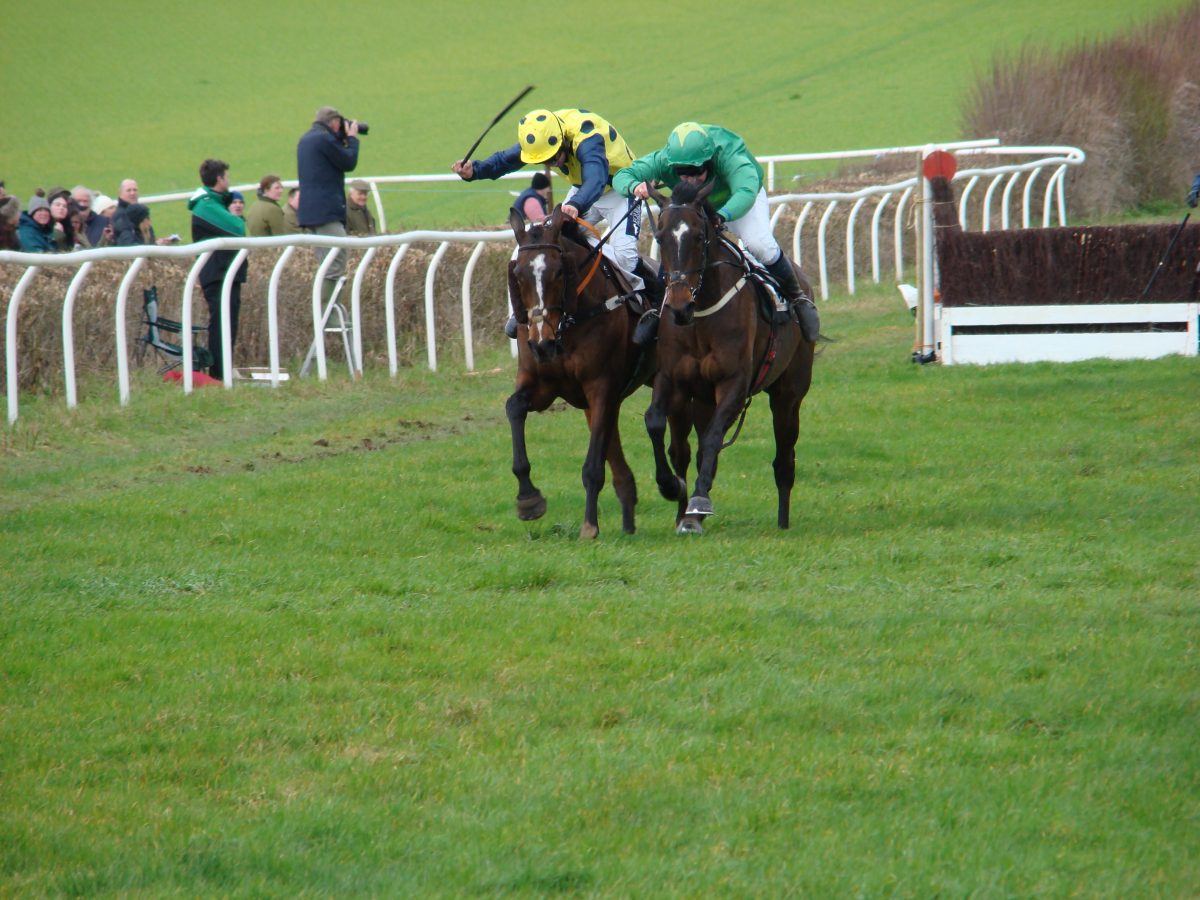 West Midland based combinations looked to have good chances in the Novice Riders, with Little Windmill (Sam Brown), Minerfortyniner (Ben Sutton) and Workbench (Murray Dodds) all figuring prominently in the betting. All three were in contention on the final turn but were found wanting in the home straight.

Master Dancer and Fergus Gillard hit the front with three to jump. Will Woodman and Fly West had been making steady progress throughout the final mile but were unable to sustain their efforts and had to give up the unequal struggle on the flat.

Master Baker started favourite for the Skinners sponsored Ladies Open and judging by the early pace it was evident the opposition wanted to make it a true test of stamina, with Sonneofpresenting and Tom Barton setting a searching pace.

They were still vying for the lead passing the trees at the far end of the course, but Master Baker slowly crept into contention before Sonneofpresenting got rid of his rider with three to jump. Zamparelli looked to have a chance with half a mile to run but his effort petered out although he did best of the West Midland runners. 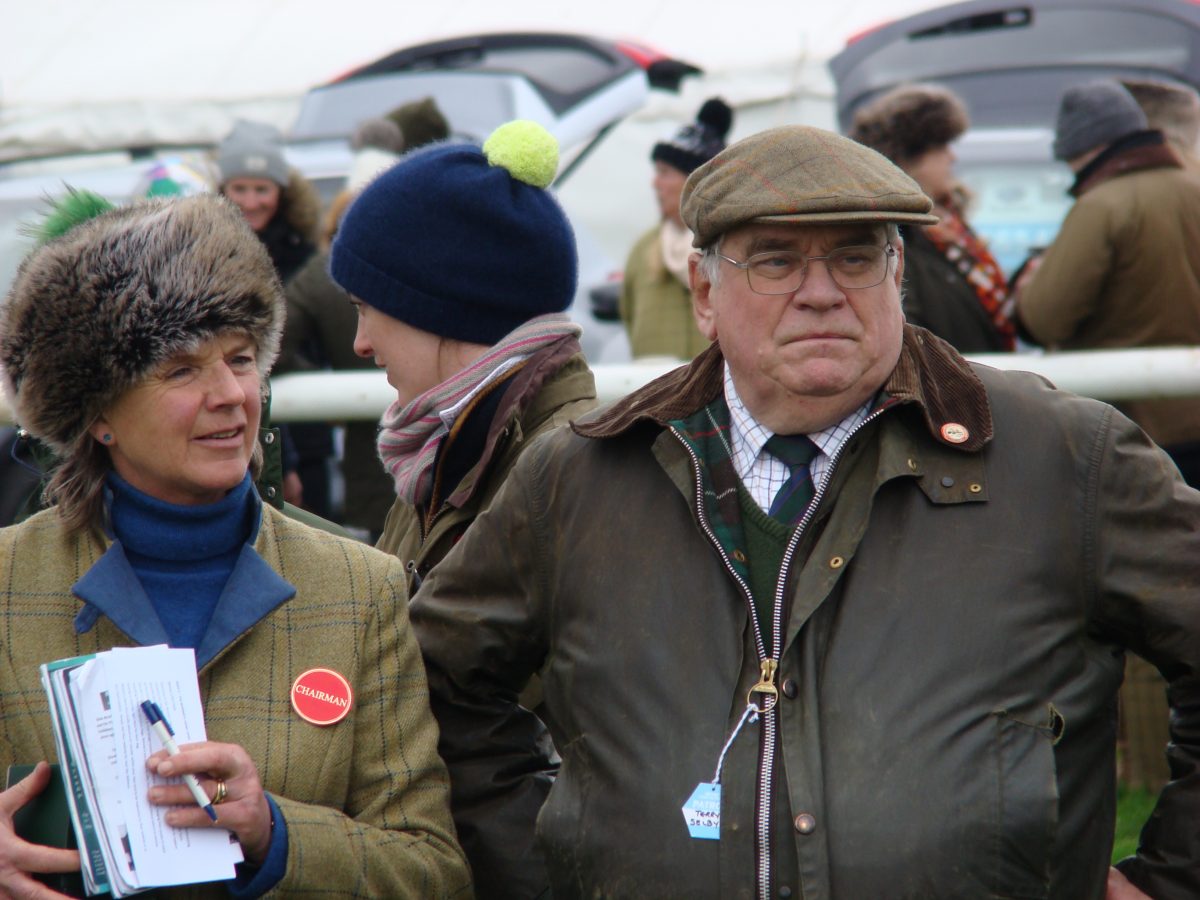 As mentioned in previous reports, our jockeys are in demand all over the country with both James King and Tommie O’Bryan making the long journey to Charing for the South East Club meeting.

King was the only one to score teaming up with the Fran Nimmo trained Kenyan Cowboy to land a 3-length success in the 2-1/2 mile Maiden with O’Brien placed third on Cydercourt.

That jockey fortunes did not improve in the Retraining of Horses Conditions where Kelvingrove went down by a head in a very close finish, while the ex-Mary Vesty trained Darius Des Bois scored a one and a half length victory in the Ladies Open for his new connections.

Alice Stevens travelled over to the Waveney Harriers meeting at Higham where she steered Laser Beam to victory in the Members.

The previous week the Brocklesby defied the weather to hold their Point-to-Point where the Mares Maiden saw the Sophie Lacey trained Gold Clermont score a 3-length victory.

That horse and his stablemate Velasco made their way to Tattersalls Cheltenham Sales last Friday both unfortunately for their connections neither horse sold, with Gold Clermont led out when the bidding closed at £28,000, while Velasco failed to sell at £95,000. Recent Chaddesley Corbett winner Glory and Honour was another who returned home as bidding for him finished at £58,000.