With Sunday’s meetings lost due to the threat from Storm Ciara, it was definitely a case of the “lull before the storm”, because 24 hours earlier conditions had been much more amenable when the Albrighton & Woodland staged their fixture at Chaddesley Corbett.

West Midland based Alex Edwards, Tommie O’Brien, James King and Zac Baker are some of the best jockeys on the Point-to-Point circuit. Edwards has won the Areas Riders Title for the last three seasons but with such strength in depth it will be interesting to see who prevails at the end of the season.

Edwards, O’Brien and King all got their names on the scoresheet in the 2-1/2 mile Maiden which heralded the start of the West Midland season, with O’Brien coming out on top with an all the way success on Glory and Honour.

Despite his inexperience the 4-year-old son of Elusive Pimpernel led from the start and was jumping exuberantly before being joined by Maitree Express down the back straight. That horse began to weaken as they met the rising ground, but Glory and Honour continued his relentless gallop and turned back towards home with the race in his pocket. 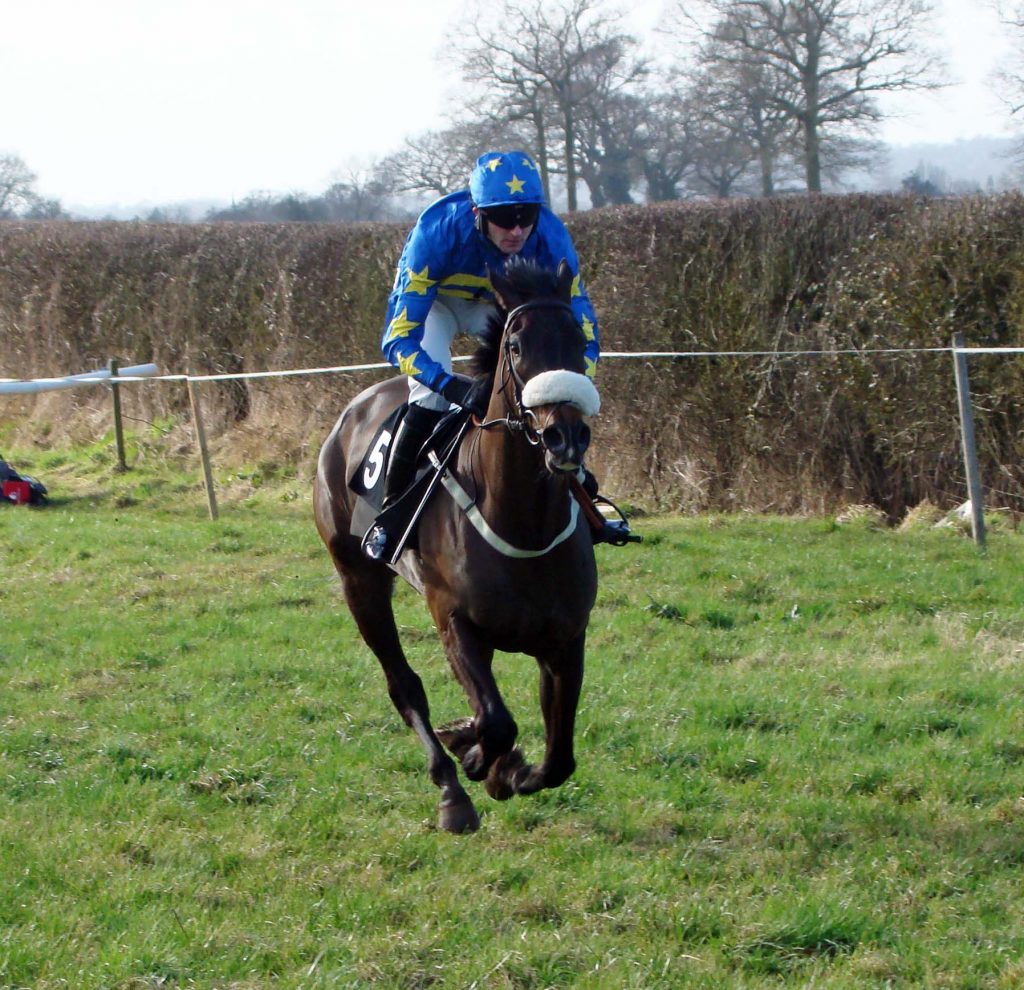 The winner was purchased at Tattersalls last May by Tweenhills Stud Hand Anya Ingman “I liked the look of him and he was nice and quiet. I’ve been thinking about a Pointer for a few years so the aim is to sell him on to provide funds for another purchase. I rent a box about 10 minutes from Tom Lacey’s and have been able to use his gallops”. After this performance connections should be able to make a good profit. 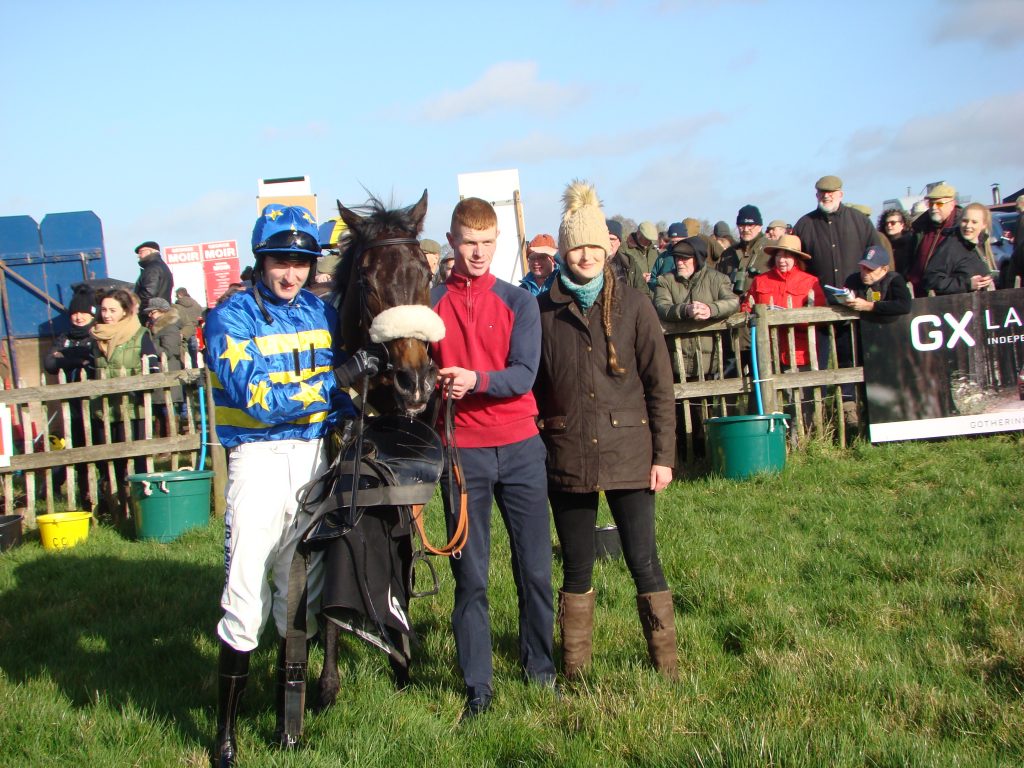 O’Brien did not have time to celebrate or answer questions as he sprinted to his car immediately after weighing in to make the short journey to team up with Sir Egbert in a Warwick Hurdle.

Alex Edwards and Salvatore had to work hard for their victory in the Mens Open. Pearls Legend was an early casualty but Red Devil Star had taken the lead before his departure and continued to dictate the pace before being passed by Ballyboker Breeze on the final circuit.

Salvatore was sent in pursuit at the 14th and crept into contention and these two horses had pulled well clear of their rivals on the final turn. 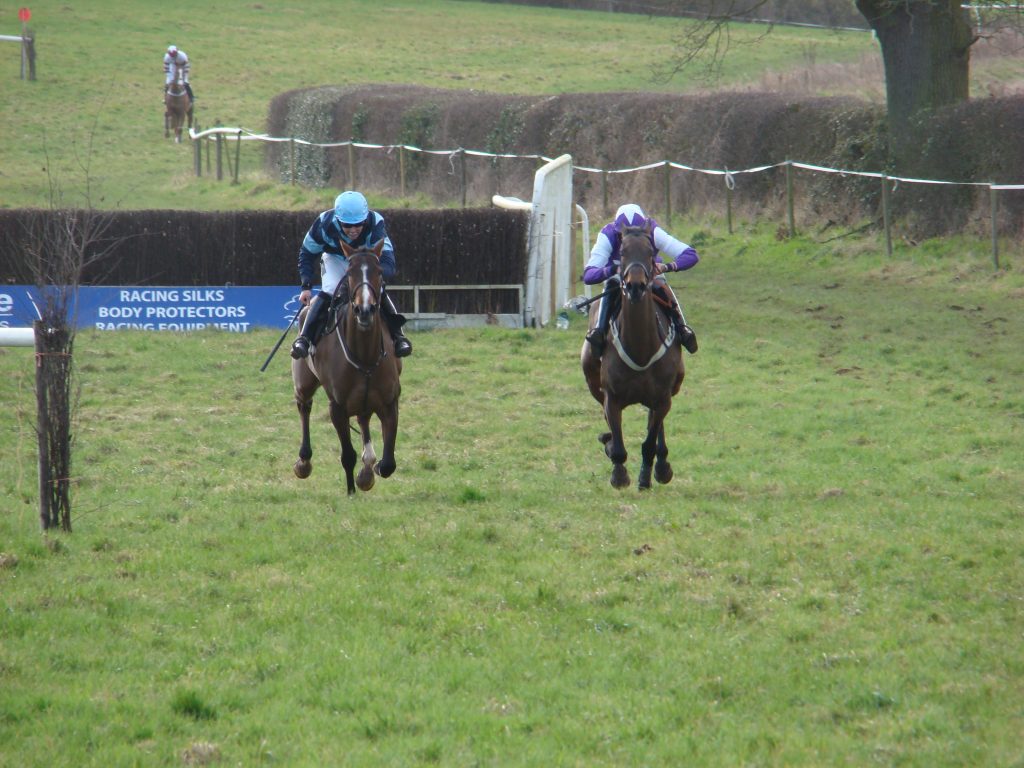 Ballyboker Breeze (right) and Salvatore between the final two fences

They were inseparable at the second last but Salvatore asserted on the run to the final obstacle and maintained his advantage on the flat. 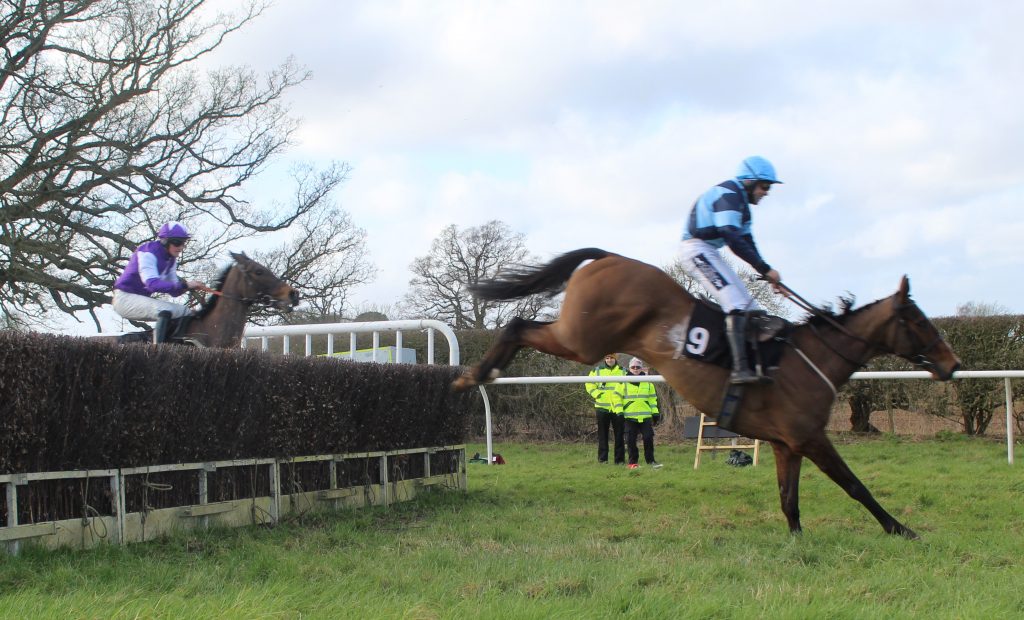 Salvatore and Alex Edwards are clear at the last

Hidden Charmer caused an upset in the Ladies Open. Itstimeforapint led for the first circuit before Hannah Lewis sent the favourite Tb Broke Her into the lead with a mile to run.

They led up the final hill but could not shake off the attentions of Hidden Charmer who came through to dispute the lead at the penultimate. Tb Broke Her’s error at this obstacle tipped the scales in favour of Josephine Banks mount but the favourite showed tenacity to battle back approaching the last but could not claw back the deficit on the run in. 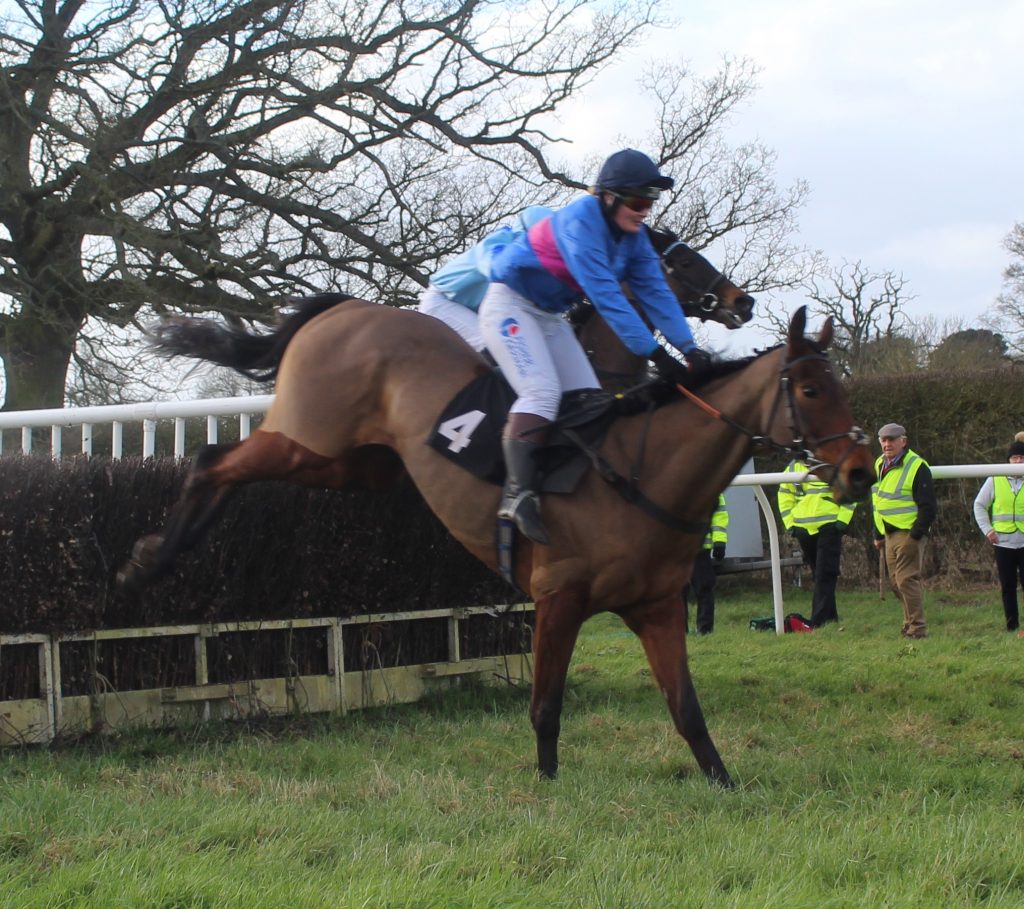 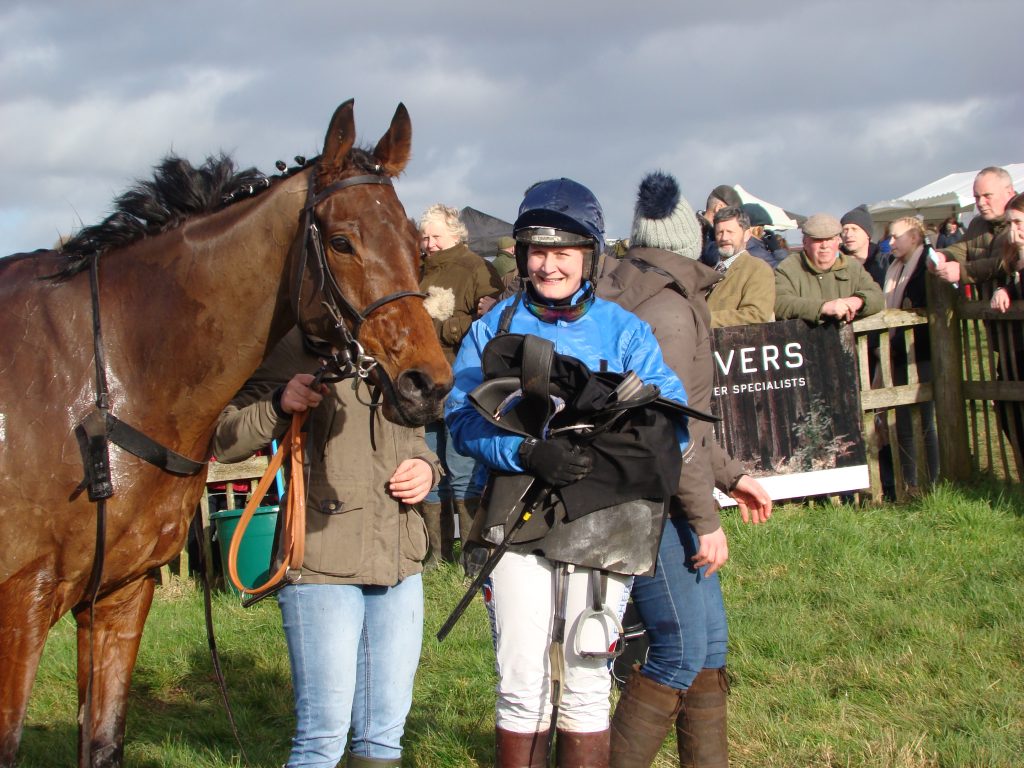 Hidden Charmer holds a narrow lead at the last. A delighted Josephine Banks in the winners enclosure

The winner was purchased at Ascot Sales last May by the legendary Pat Tollit and her colours have a long and successful association with the course at Chaddesley Corbett.

Clive Bennett’s Miss Seagreen started a warm favourite for the Intermediate but had to settle for second place behind the Don Constable owned and Joe O’Shea trained Mr Snuffles.

Huw Edwards sent his mount into the lead at the 13th as the leader Easythingsarebest began to beat a retreat, but Sam Jukes and Miss Seagreen covered this move and they had a healthy advantage over the opposition in the final half mile.

Having got first run Mr Snuffles always was a stride or so clear but Miss Seagreen was fighting back before a last fence blunder put paid to her chances. 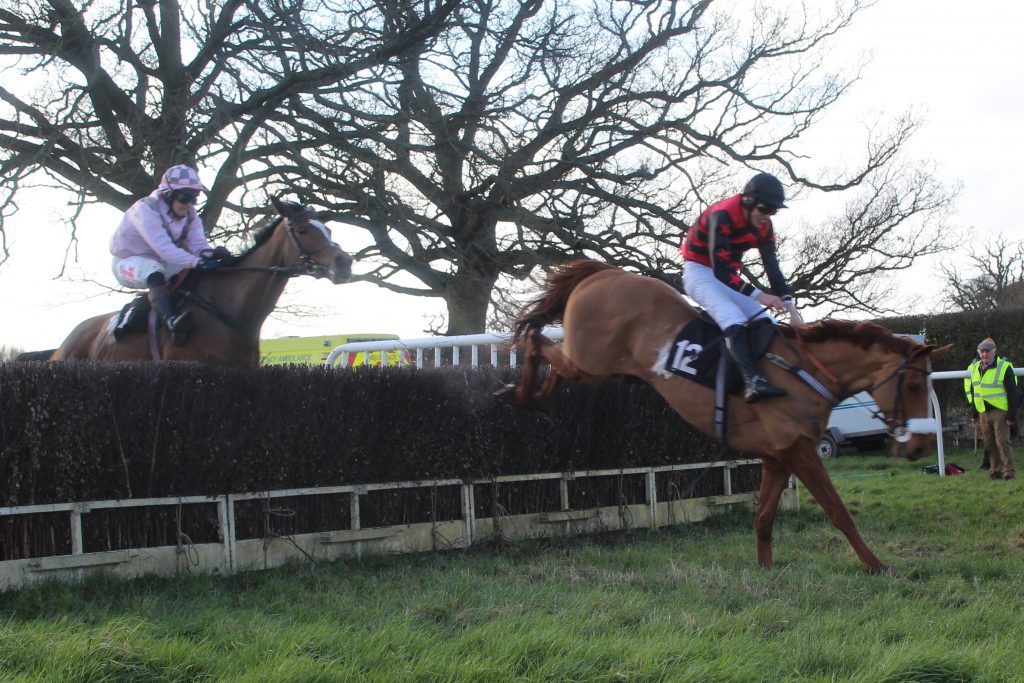 Both the winning owner and trainer enjoy a battle with the bookmakers and this time they came out on top with Constable commenting. “Huw carried out the trainer’s instructions to the letter. We fancied him today and had a good bet”. 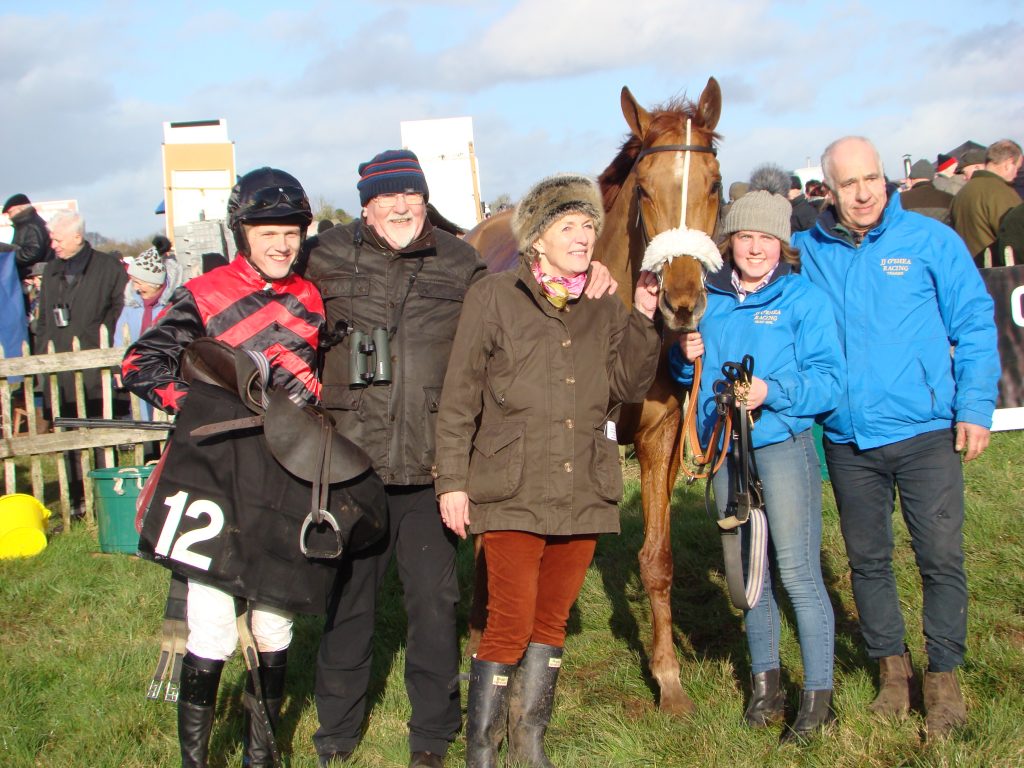 The Bookmakers recovered their losses in the Novice Riders, as some punters were prepared to put significant sums on the odds-on favourite Don Bersy. Normally there would be nothing risky with this policy but on this occasion, they got their fingers burnt.

Ryan Potters geldings form was far superior to his rivals but that counted for nothing as Don Bersy who had shown some quirks at the start in the past, dug in his toes as the flag dropped.

Minerfortyniner had also been reluctant to line up but did set off on level terms and disputed the lead with Brave Encounter until that horse weakened in the final mile.

Ben Sutton and Minerfortyniner led Sea Beat on the home turn but Doc Carver’s progress caught the eye and these two had a tremendous battle over the final two fences with Doc Carver and Rebecca Pugh hanging on grimly for a half-length success. 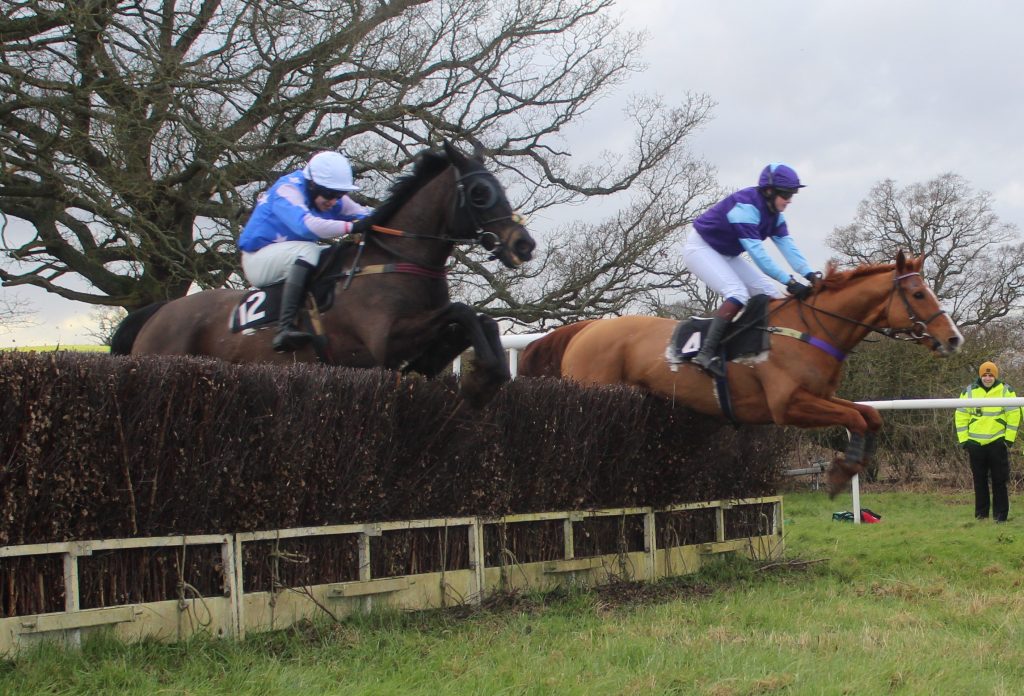 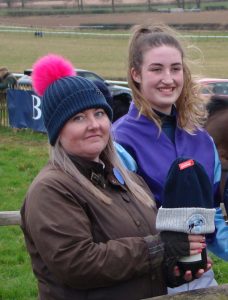 The Herbert family enjoyed great success with Arthur Moore cast off Ballycahane before he was sent to the Sales to be replaced by Organised Solution who came from the same source.

The 6-year-old has run two good races this season, finishing fourth at Larkhill and second at Bangor and looked to have a solid chance in the 3-mile Maiden.

Along with the well fancied Lilith these two set the pace from the start and it was one which many of the other runners could not match.

It was clear Milo Herbert and Organised Solution were gaining the upper hand as they bypassed the third from home and that assumption proved correct as the leader turned for home with a healthy advantage. 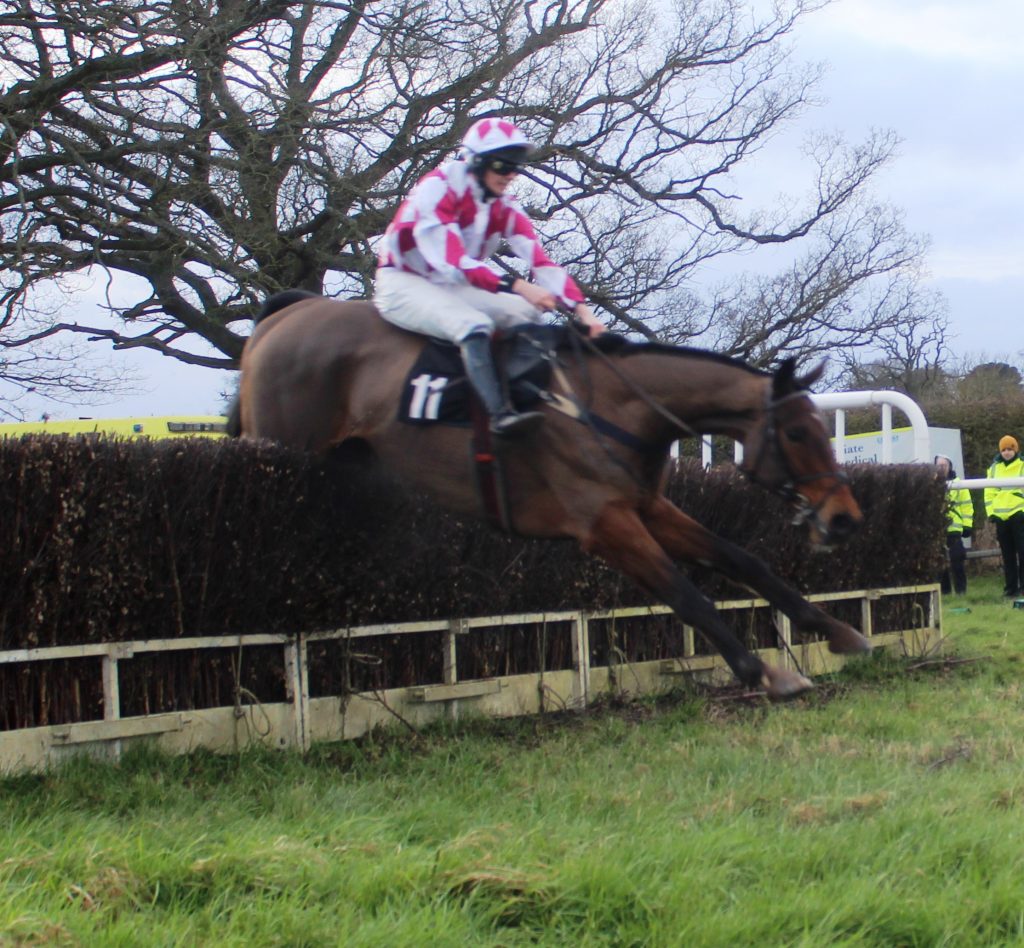 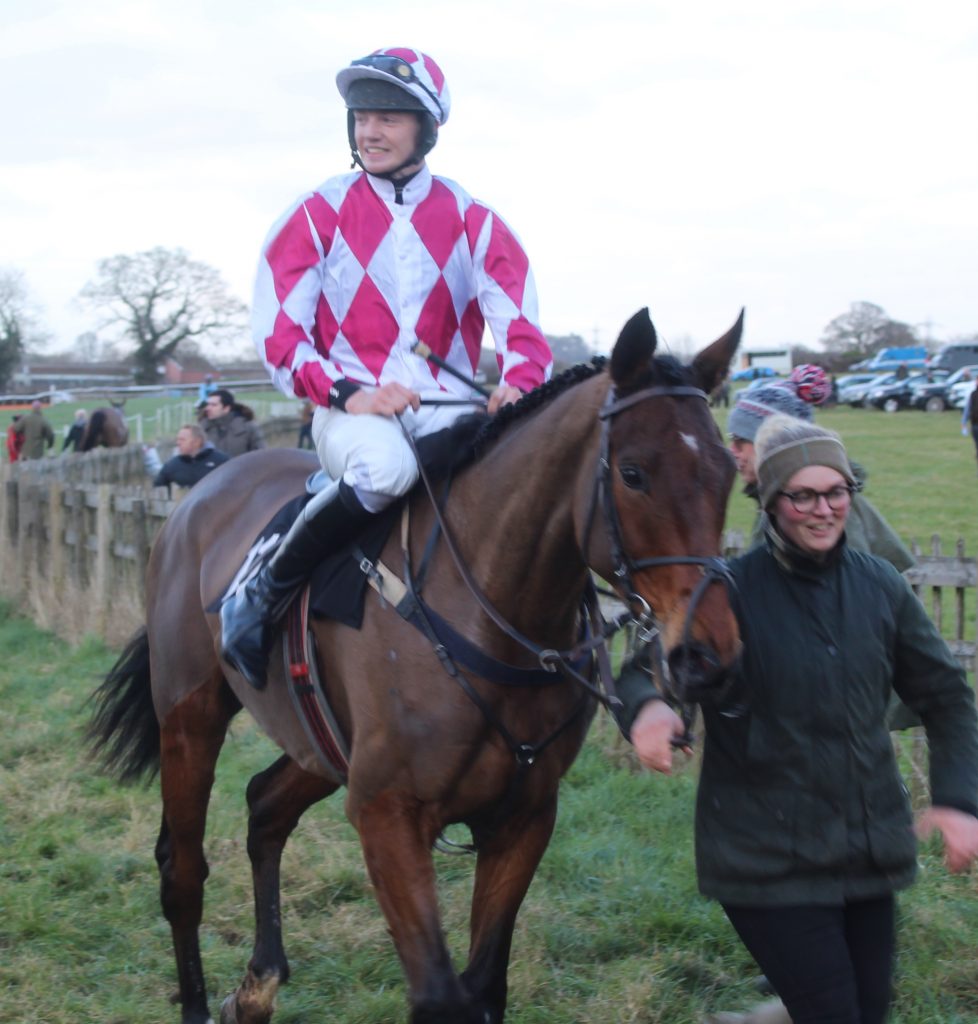 Lilith tried her best but was always fighting a losing battle although she was still in second spot when she was claimed by the final obstacle. That left Rose Iland to inherit second place and herald a welcome return to the winner’s enclosure for owner Jim Collett.

Don Bersy’s stablemate Family Man was strong fancied for the Restricted, but after being in contention on the home turn he faded out of contention with the Welsh raider Getaway Flyer and Jodie Hughes proving too strong for Frank and Honest over the final two fences.

Graeme McPherson bypassed Chaddesley and took the Cotswold qualified Lord Scoundrel over to contest a Cottenham Ladies Open and that proved an inspired choice with the ex-Gigginstown runner scoring under Lilly Pinchin.

The 11-year-old had been a prolific winner for his previous yard but had not run since being purchased by his current connections at Goffs in September 2018. Despite that long absence they justified market support at the expense of recent Higham winner Knockoutloaded, with Alexandra Knights mount unable to respond when passed by the favourite at the third from home.

Last weekend turned out to be a good one for the Tom Lacey stable winning under Rules with Sebastapol at Musselburgh on Saturday and The Dorking Cock at Carlisle two days later, while his wife Sophie scored two wins during Sundays South Dorset Point-to-Point at Milbourne St Andrew under Tommie O’Brien.

Maiden runner from this stable are bound to start at short odds but past experience has proved they will invariably end up on the winning side.

The second half of the short Maiden went to the Tom Lacey owned Velasco, who was receiving a lot of weight from most of the field. Although helpful that concession just confirmed what was obvious to everybody who saw this performance and that was, they were head and shoulders above his rivals in terms of ability.

This success was also a major milestone in the career of O’Brien who was recording his 100th  career success with 63 of those coming in Point-to-Points in England and Ireland plus 37 victories under Rules.

O’Brien’s double was completed on Lagonda in Division I of the 3-mile Maiden. Trea Newell’s home bred mare had finished third in a Barbury Maiden in December, and like her stablemate just needed to be pushed out to win in impressive fashion.

Supporters of the favourite Lip Service were left cursing their luck after the Fergal O’Brien owned and Sally Randall trained runner pitched on landing over the last in the Novice Riders and ejected Katie Sinclair from the saddle.

This combination had dominated the race from the start and were in an unassailable lead at the time, but the drama was not over because markers were placed in the last fence requiring the two remaining runners to take avoiding action.

Dan’s Wee Man and Georgina Davies were out on their feet at the finish and were passed on the run in by the Scott Malson ridden and Jason Warner owned Mister Dick. This resulted in the Brookthorpe based trainer providing the 29-year-old jockey with his first winner after three years on the Point-to-Point circuit. 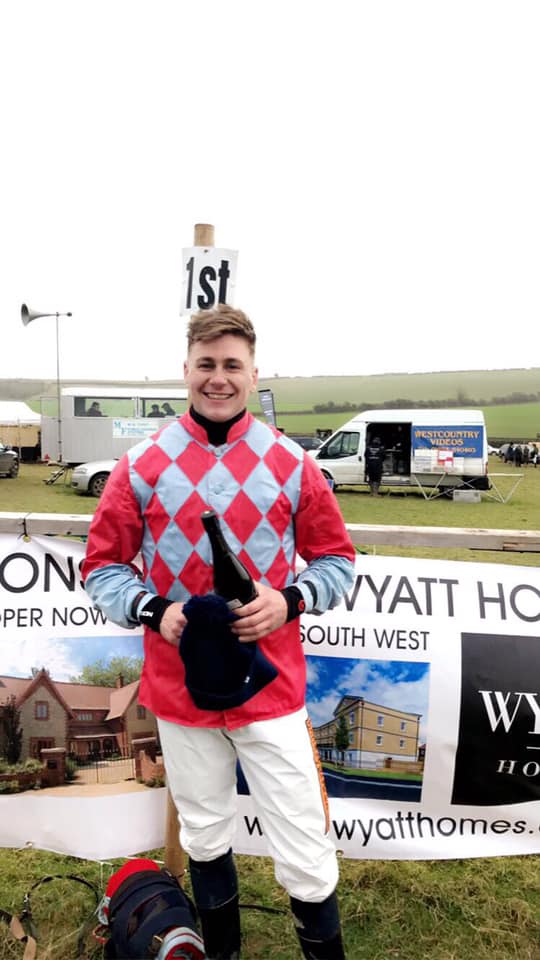 Things have not gone Summer Sounds way during the early weeks of the season and it seemed this was going to continue in the Novice Riders race at Horseheath on Saturday afternoon.

Summer Sounds was some way adrift as they turned into the home straight but Luke Scott was confident his mount would stay the trip so the pairing renewed their effort on the climb to the post. 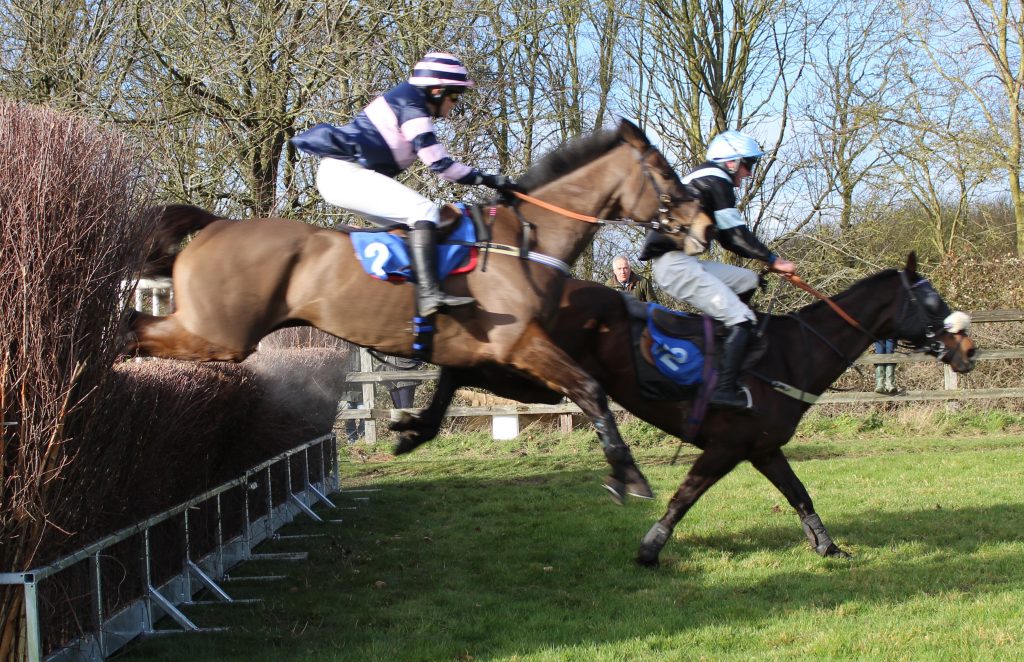 They were on level terms with Back Bar at the last, but Luke Scott somehow managed to maintain the partnership despite a slipping saddle until bailing out just after they passed the judge.

With the rider less horse galloping off into the distance it took some time for the rider to be reunited with all his tack but under the watchful eye of the stewards he was able to weigh in successfully. 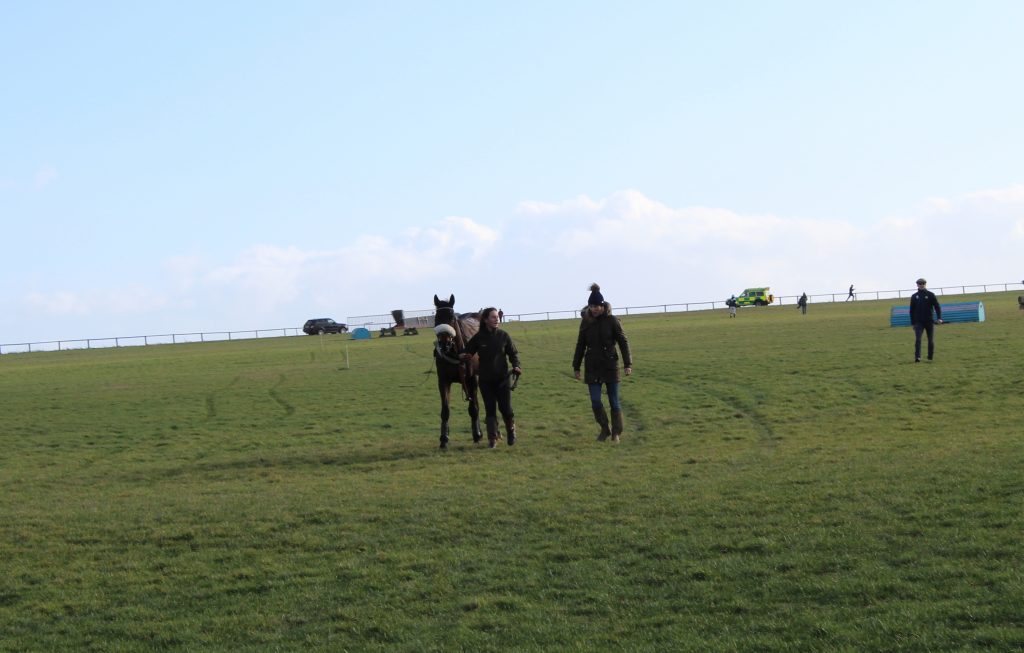