Some owners struggle for just one winner in their lifetime so one hundred successes is a major milestone and one that few achieve.

Clive Bennett ended last season on 99 winners but struck with his first runner of the new campaign when Miss Seagreen outstayed her rivals to land the Hursley Hambledon Restricted at Larkhill on Sunday afternoon.

Trainer/Jockey Sam Jukes has played a major part in helping the Dymock based owner achieve this formidable total with half of their successes being recorded over the last five years so it was fitting that he should steer the mare to victory.

Public Relations provided Bennett with his first winner at Maisemore Park back in 1987, and 32 years later his stable is still firing in the winners, and he has broadened his support for the sport by becoming one of the Area’s major sponsors.

Bennetts home bred mare had the best credentials in the Restricted although there was plenty of support for Phil Rowley’s runner Share A Bear. Both horses settled behind Magna Sam who pulled his way to the front passing the crowd for the first time.

He extended his advantage racing out into the country and was well clear at the far end of the course. Sam Jukes sent the favourite in pursuit as they came back into view but Tommie O’Brien and Magna Sam were proving difficult to peg back.

With their remaining rivals dropping away the race developed into a straight fight between the two leaders and momentarily it looked as though O’Brien’s enterprising tactics were paying off, but Miss Seagreen scooted around the final bend and soon had Magna Sam in her sights. 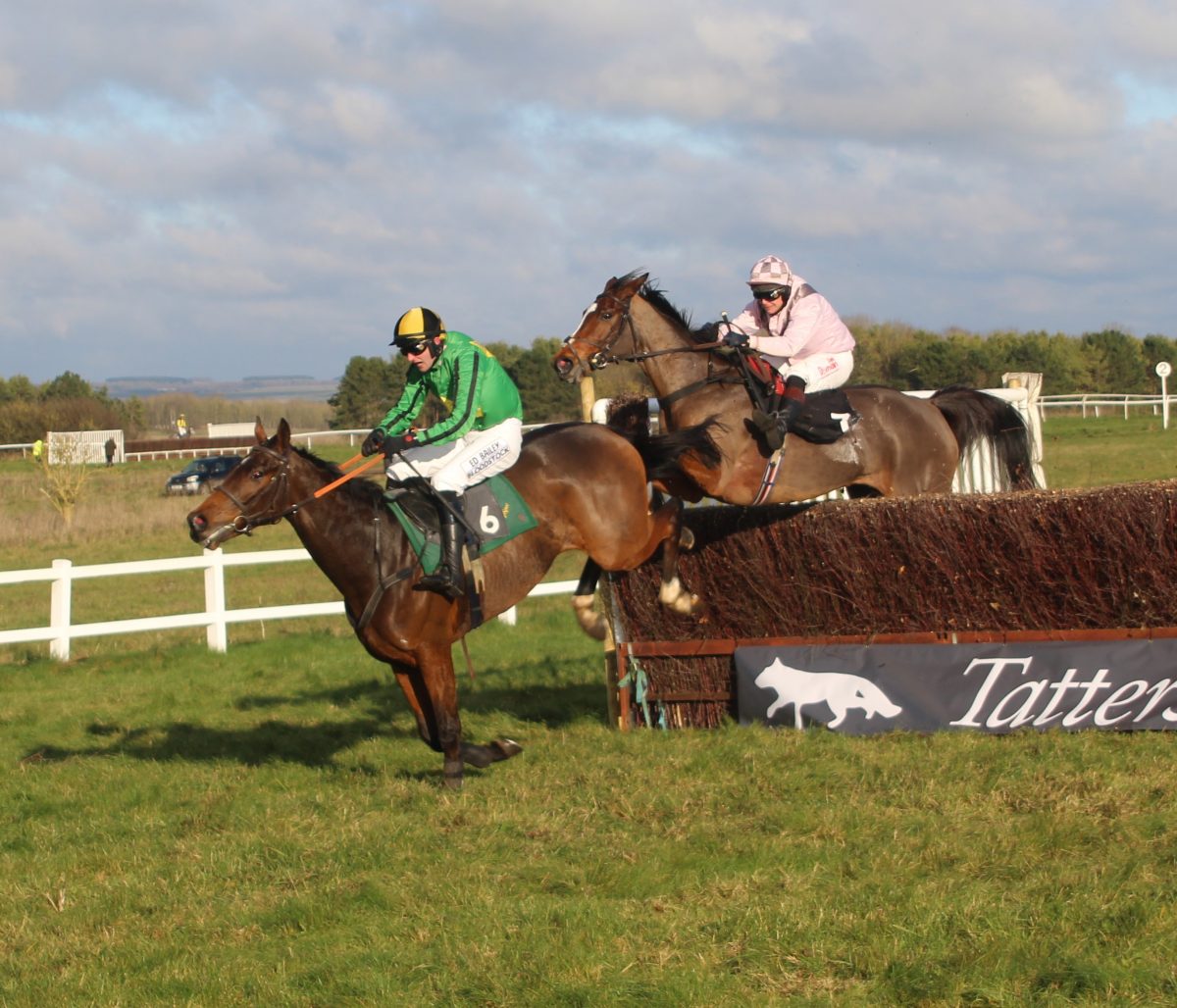 He started off up the run in with a narrow advantage but as she had done last year the mare stormed clear on the flat to provide connections with cause for celebration. 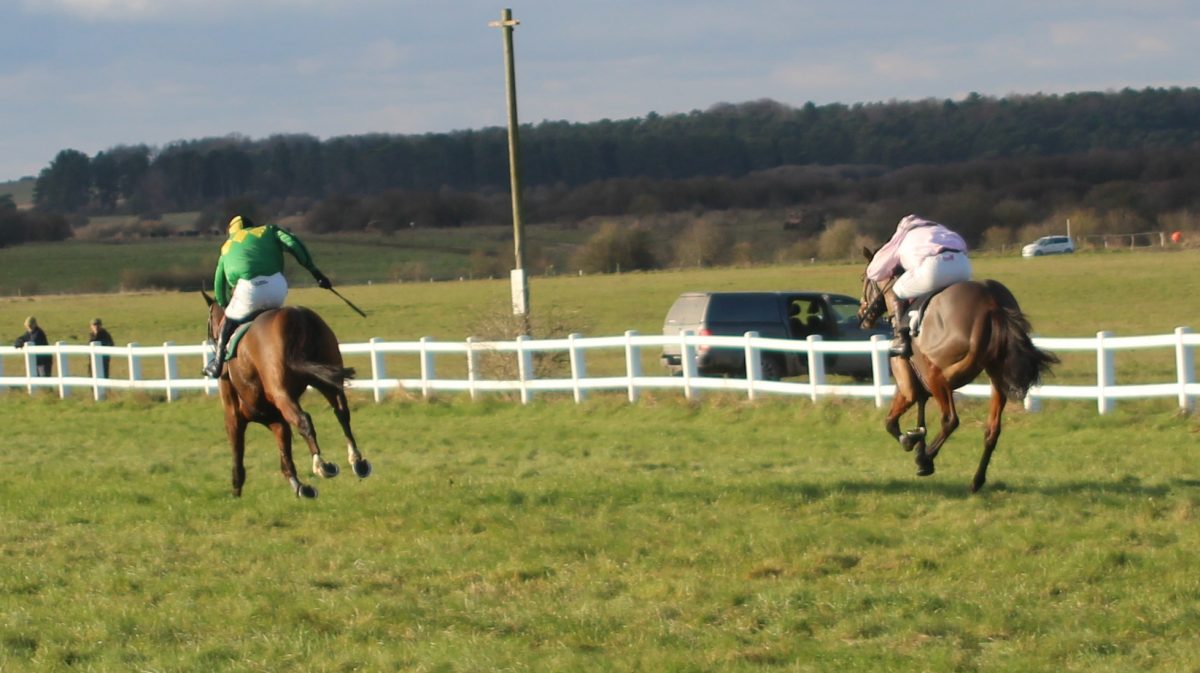 “She is a fifth-generation home bred” stated the owner afterwards who always enjoys his successes but this one must have been particularly sweet “she is much stronger this year and I am thrilled”. Asked how many horses he has Bennett replied “too many”.

20 runners faced the starter in the Conditions and with course specialist Coco Live and Three Faces West setting a strong pace the field started to fragment after seven fences.

This pair maintained their advantage until half a mile from home where the strong pace began to take its toll on Three Faces West, but Coco Live then faced an even stiffer challenge as Salvatore loomed up around the final bend. 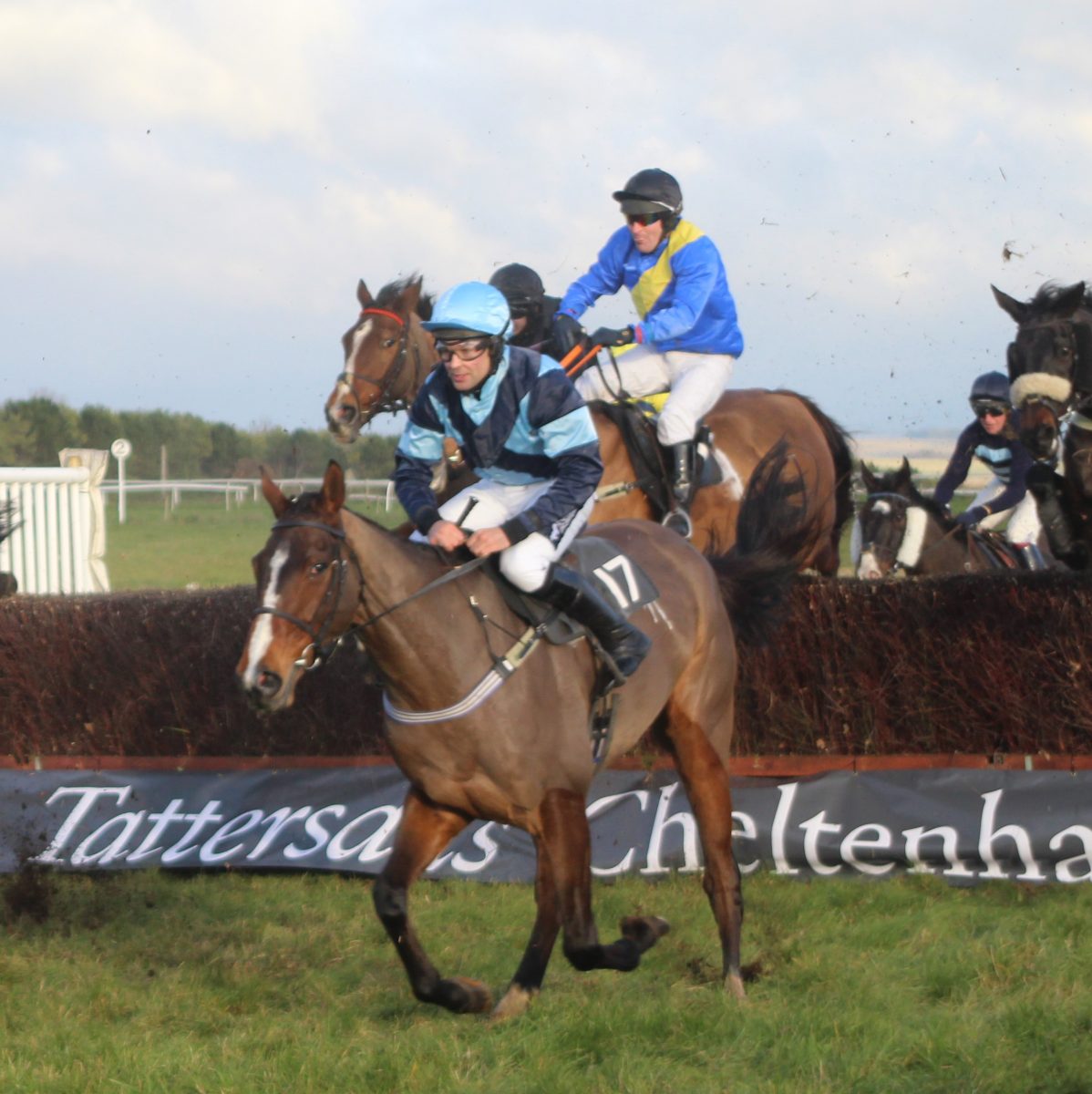 Salvatore during the early stages of the Conditions

Coco Live was a sitting duck as they approached the last and had nothing left to offer when passed by the winner on the flat.

Salvatore’s trainer Phil Rowley commented later “He is a lovely young horse, but I was not sure if he was fit enough. We have not had much luck here but it is wonderful ground and he is a progressive sort that travels and jumps well. He could have run in a Conditions Race at Ffos Llas next week but would have had to carry a 6lb penalty so we came her instead and it was well worth the 6-hour round trip”.

The first of the Tattersalls Cheltenham four and five year old Maidens went to West Midland jockey James King and his association with Fran Nimmo’s stable could prove beneficial to both parties this season.

Given the stables reputation in these type of events Pass Rusher was virtually ignored in the market but put his rivals to the sword by storming clear after the last to record a 5-length success over Butter Hill Boris. 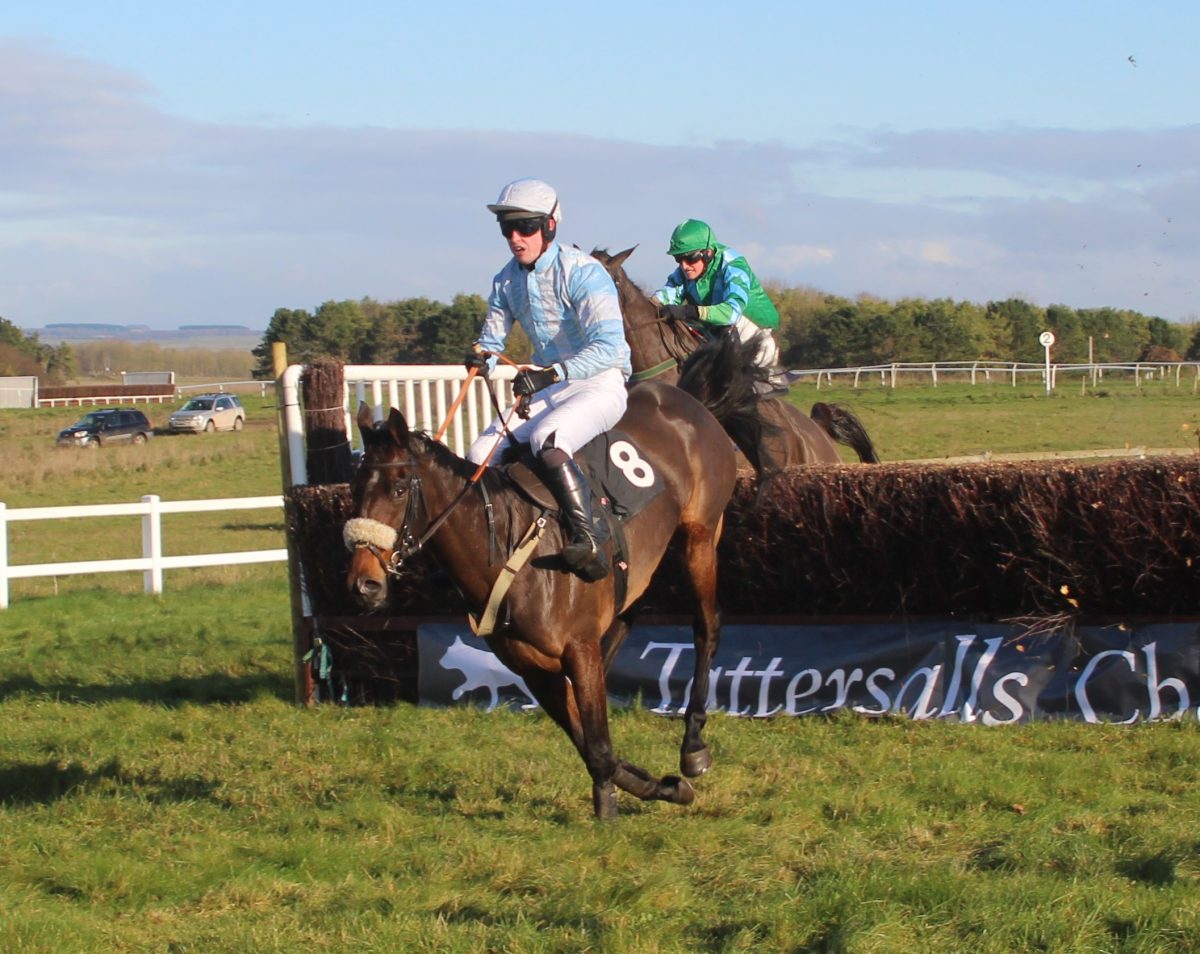 The Immy Robinson ridden and Joe O’Shea trained Ravished were hot favourites for the Ladies Open on the strength of their performance at Cottenham, but the Cambridgeshire course and Larkhill are as different as chalk and cheese.

Southfield Theatre, Facile Ben and Beggars Velvet set the pace with Robinson content to bide her time before moving into a challenging position with four to jump. 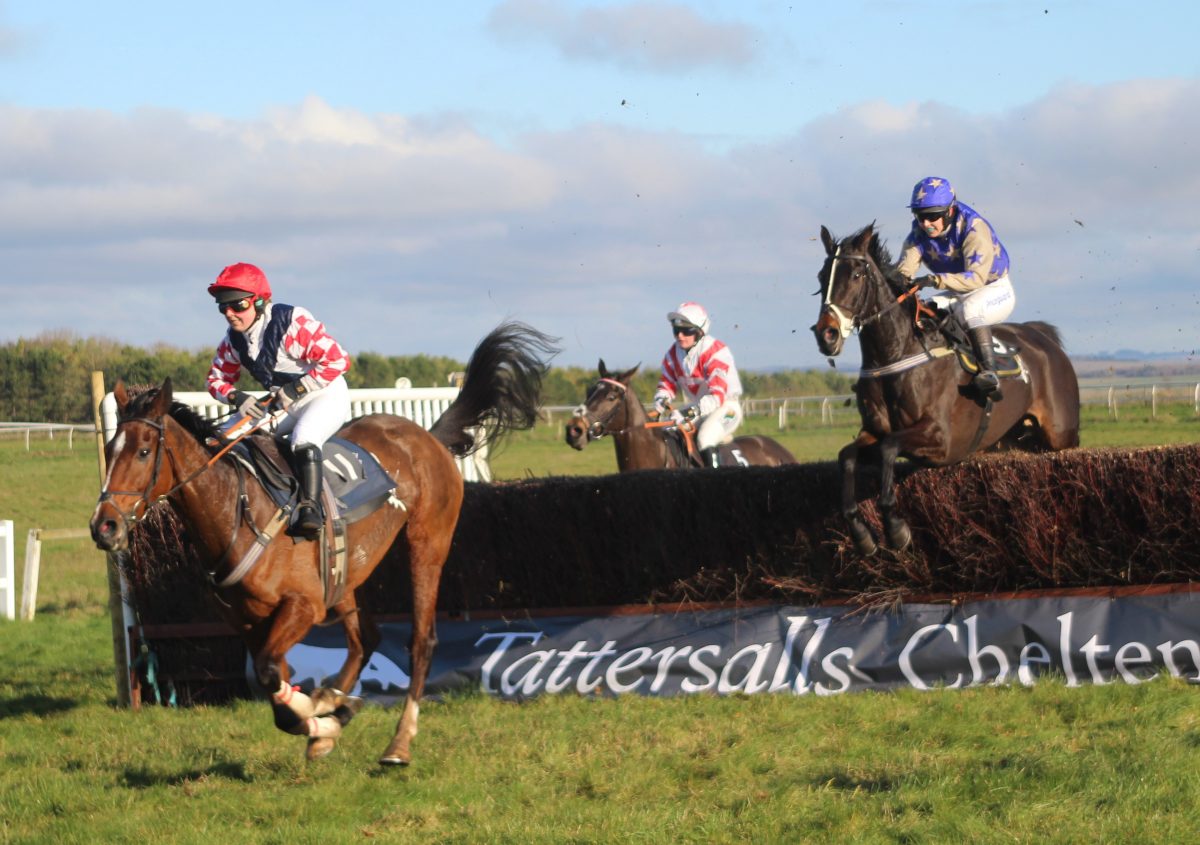 Southfield Theatre led round the final bend and put in another magnificent jump at the last and had sufficient reserves to hold the favourites challenge on the flat.

There was another close finish in the Men’s Open. Emma Alvis’s runner Big Casino was prominent during the early stages of this contest but was passed by Will Biddicks mount Lets Get at It at the 6th who led until passed by Ballynagour who shot into a clear lead with a mile to run. 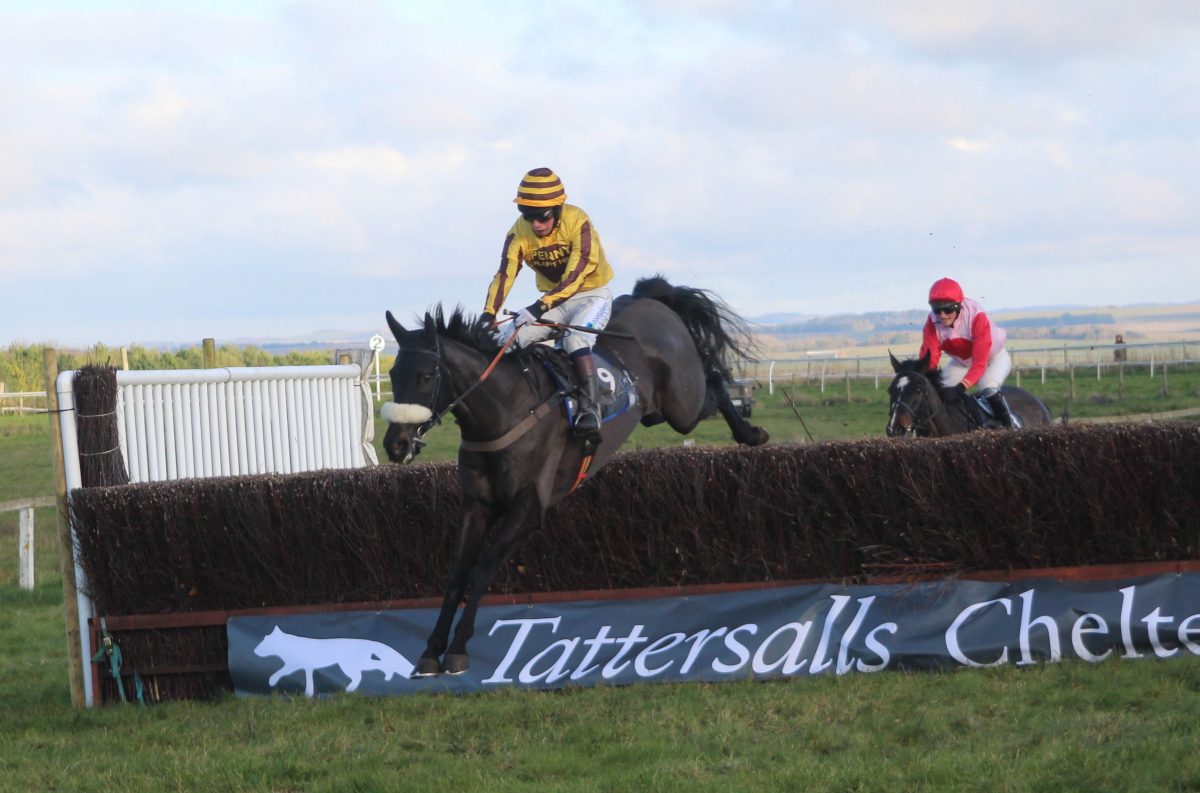 Earth Leader is well clear of Big Casino at the last, but the runner up was much closer as they passed the judge

That effort was short-lived because he soon weakened, which allowed Earth Leader to lead at the last. Big Casino who had lost a prominent position at the top of the hill suddenly began to pass tiring rivals but still had a significant amount of ground to make up approaching the last, but continued to do so all the way to the post.