After a relatively quiet period, West Midland stables hit top form over the weekend with James Ridley and Sam Jukes both recording doubles; the former sending out Chase Me to land the Royal Artillery Conditions at Larkhill on Saturday afternoon, before Big Georgie took the South Wold Men’s Open 24 hours later with the Kinnersley trainer in the saddle.

Monsieur Gibraltar and Caid du Berlais set the standards in our sport but you also need suitable opponents to provide competitive racing so Sam Jukes and Clive Bennett’s willingness to take on these two Rose Loxton trained hot pots is to be applauded.

However, the Dymock stable was able to put those disappointments behind them as Gotttagottagetaway opened his account in the Modbury Harriers Maiden while stablemate Shometheway followed up her recent Ffos Las victory in the Intermediate later in the afternoon.

Bookmakers do not make many mistakes, so it was surprising to see Chase Me drift out to 9-2 in the face of sustained support for Coco Live in the R.A. Conditions.

Chase Me and Merrion Square set a searching gallop throughout and dictated the pace until tackled by Coco Live and Minim Mouse at the 4th from home.

The favourite held a two-length advantage over Merrion Square at the second from home with Chase Me a similar margin back in third, but Zac Baker now proved his worth as he began a sustained challenge on Ridley’s runner. 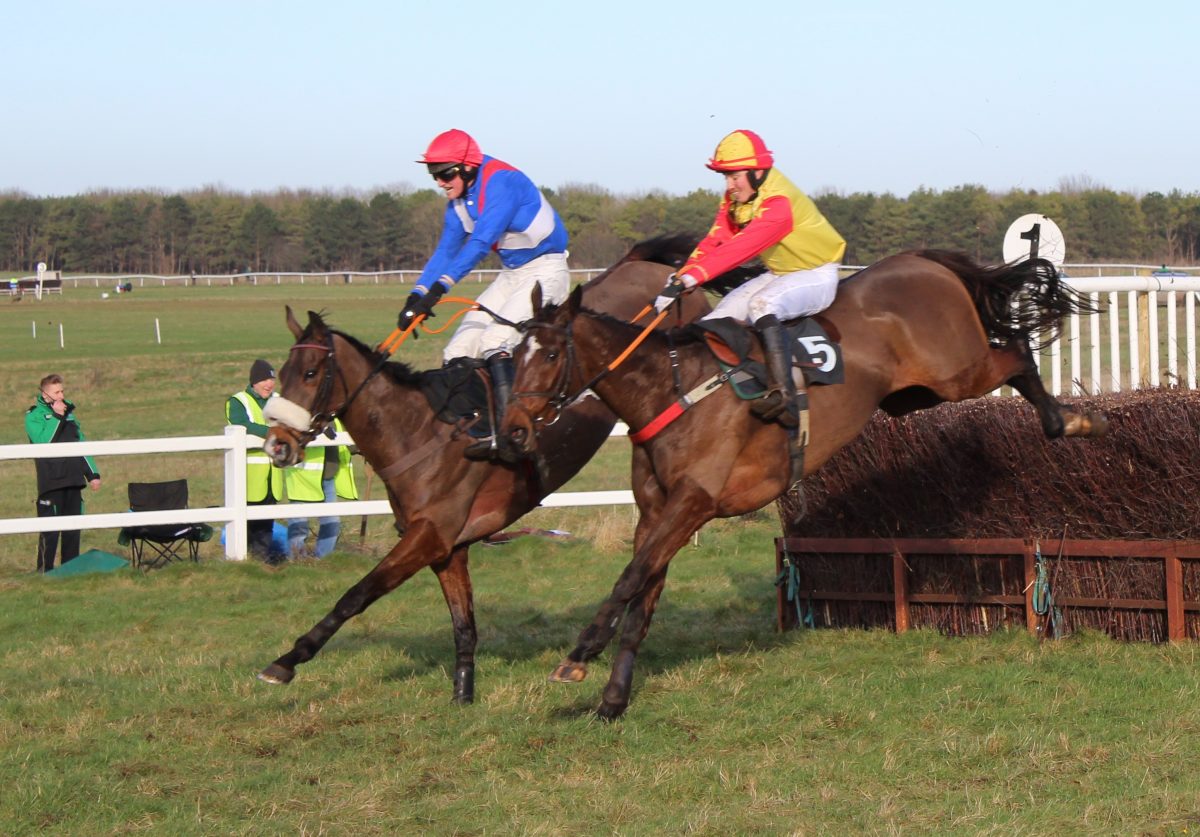 The jockey secured the vital inside berth on the final bend before producing his mount at the last and outstaying his rival on the flat. 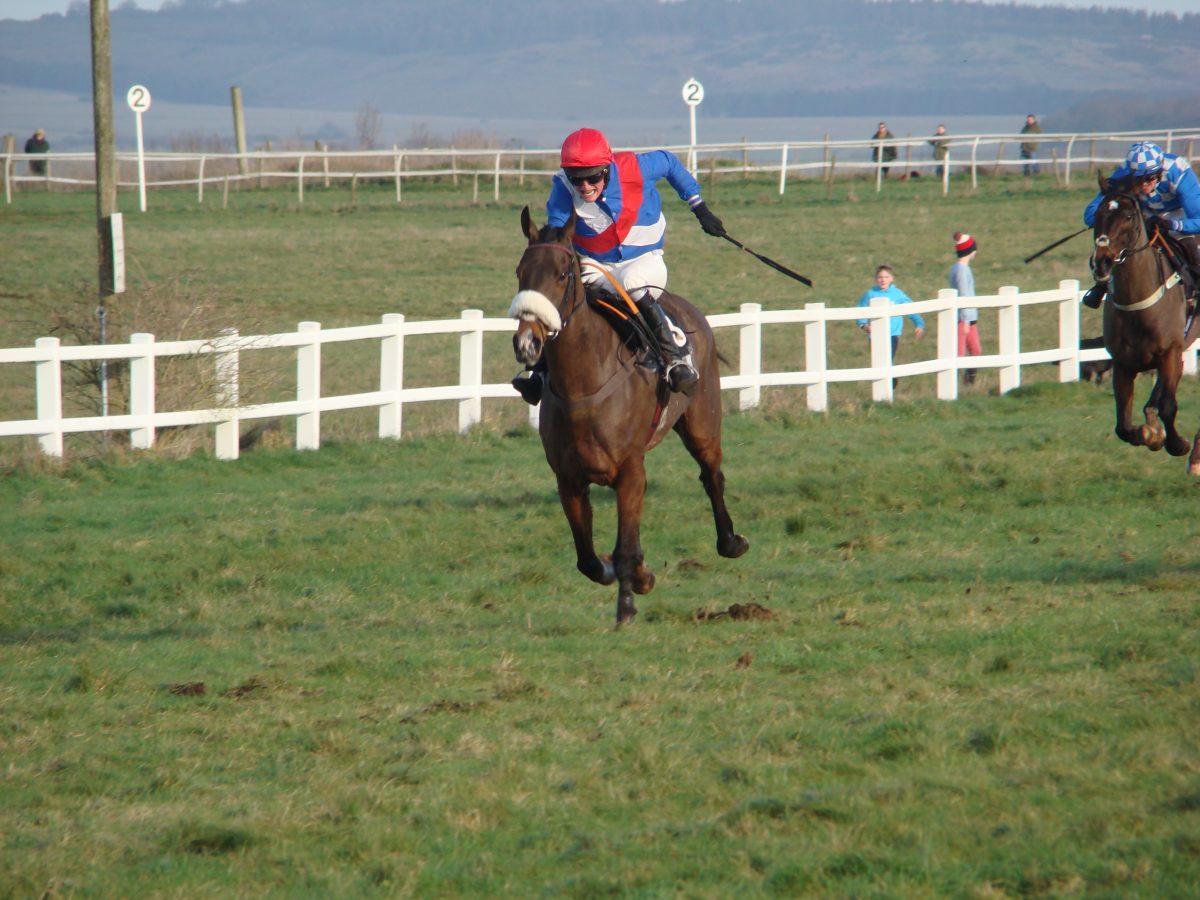 Chase Me is well clear as they race towards the judge

“That exceeded expectations” stated the trainer later “it’s the type of course he has not won on before so we did not know what to expect but Zac has given him a brilliant ride. We have been a bit slow getting off the mark and I thought he had blown up when he was passed by a couple of rivals with half a mile to run”.

Questioned on future objectives Ridley suggested Hunter Chases later in the season as he believes he would be better on good ground. 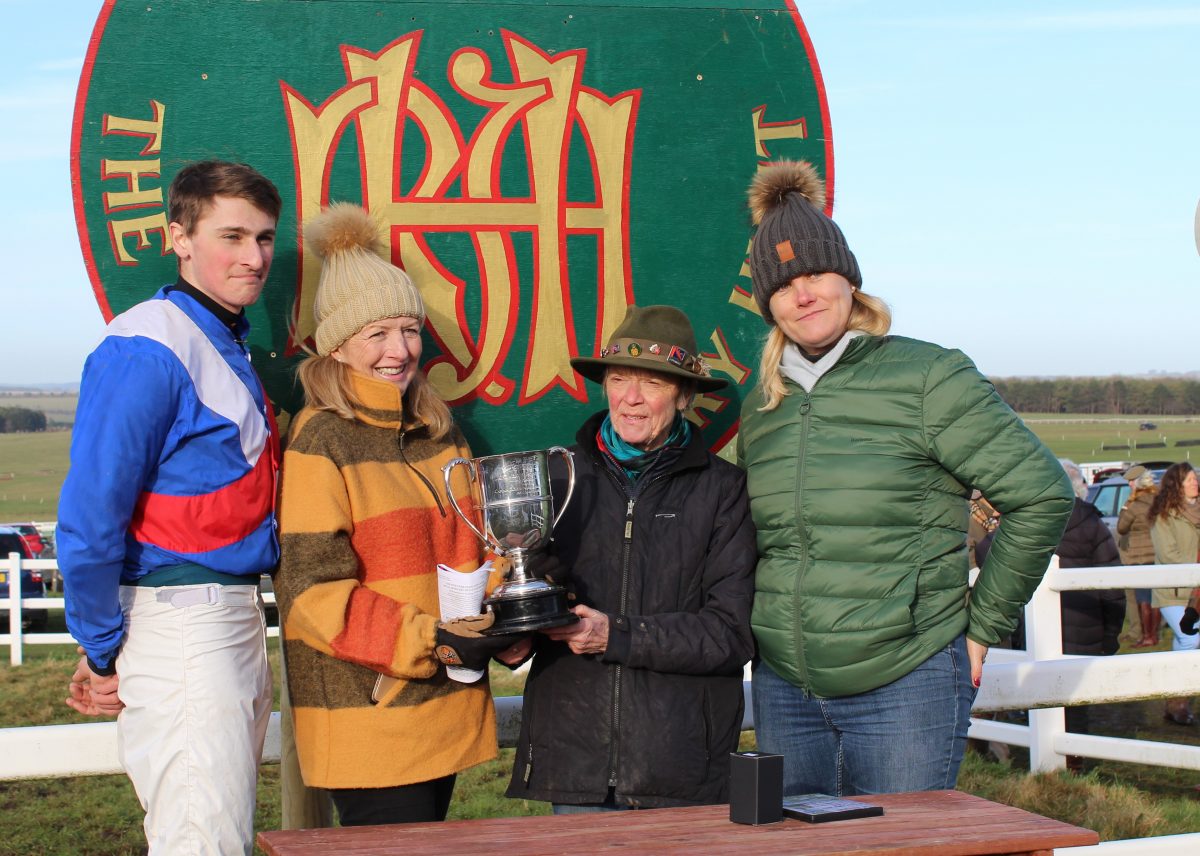 The winning jockey stated “He felt a million dollars and we went a good gallop and the others probably felt we had gone off to fast. He was getting into full stride 3 out and would have found more if needed. If you keep kicking, he keeps responding”.

This was the second leg of a double for Baker who had taken the Maiden earlier in the afternoon on the Fred Hutsby trainer Byzantium Lad who was left well clear by the last fence departure of Famous Clermont. 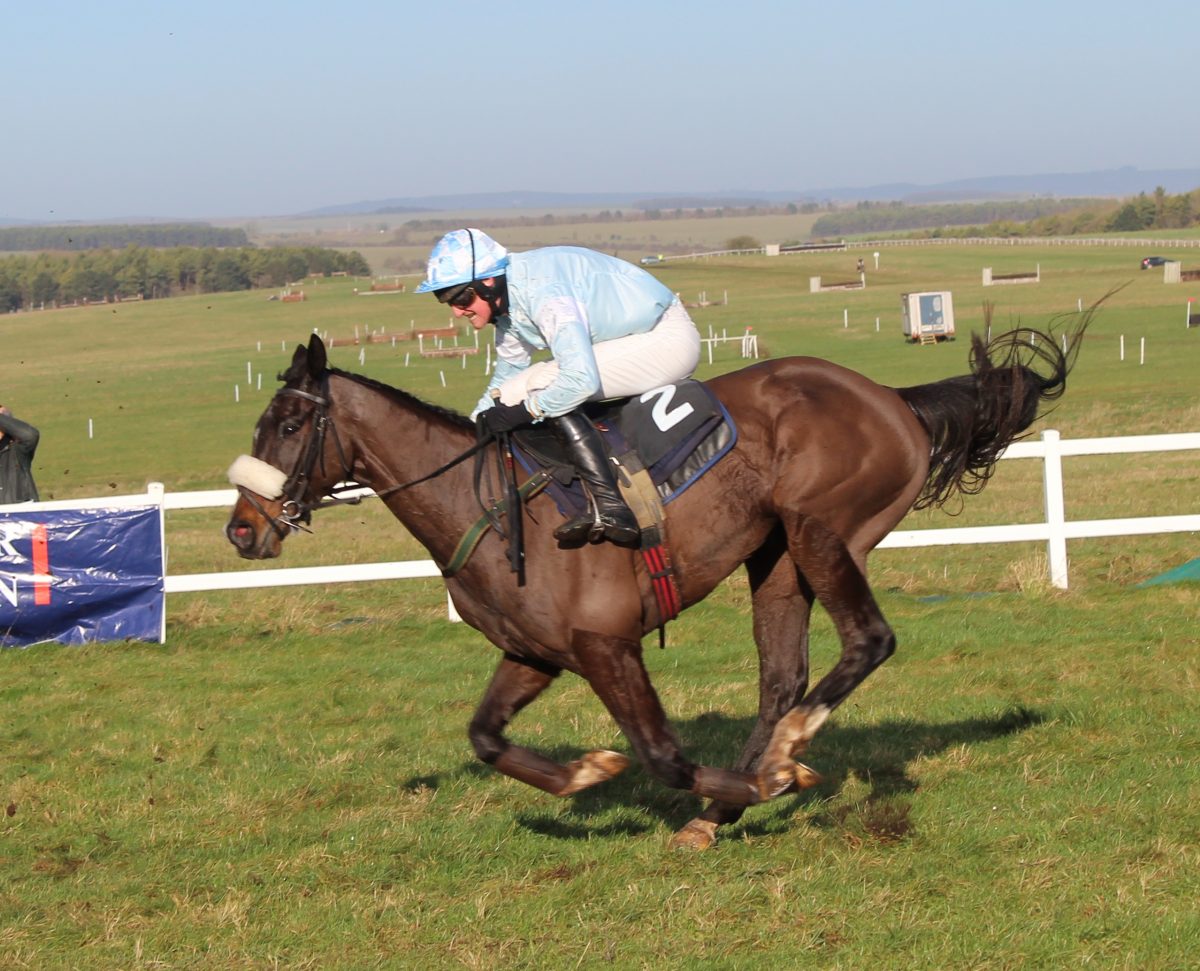 Just four rivals were prepared to take on the hot favourite Monsieur Gibraltar in the Mixed Open, with Bonds Quest and Chasforgold alternating in the lead before both horses were put firmly in their place when Angus Cheleda brought the favourite through to challenge with half a mile to run. Clive Bennetts gelding eventually won the battle for the runners up spot. 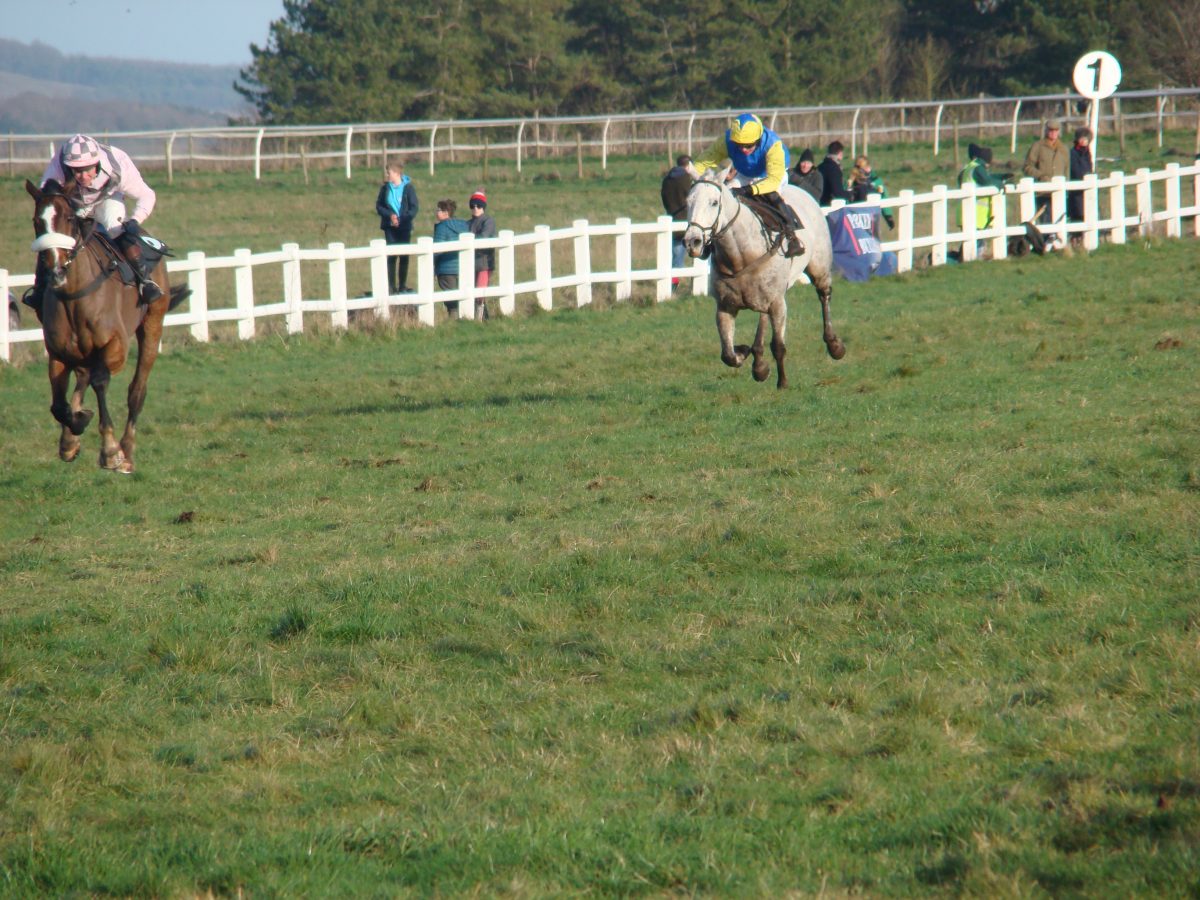 Chasforgold claims second place in the Mixed Open at Larkhill

R Bren was fancied for the Restricted but after leading to the 12th she dropped back quickly approaching three out and was allowed to come home in her own time, while the Max Comley trained Madame Hannah put in a respectable performance behind the favourite Grand Knight in the Flat Race.

Big Georgie has been a wonderful servant to the Ridley stable and the 13-year-old showed he had lost none of his courage and tenacity in the Mixed Open at Revesby Park. Ridley made much of the running until they were passed by their solitary rival Thyne for Gold but the jockey conjured up a renewed effort from his mount approaching the last that carried them to a narrow victory. 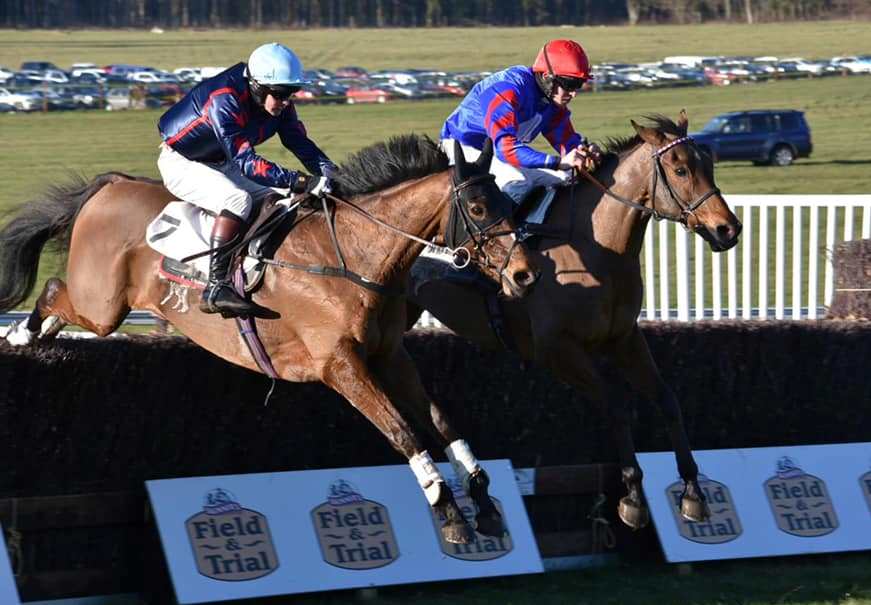 The Lincolnshire venue saw the successful return to the winner’s enclosure of Angela Slatter’s Waterloo Warrior who landed the Conditions under Tommie O’Brien. The jockey was seen at his best getting Waterloo Warrior home by a short head at the expense of Some King Lama. O’Brien went on to complete a double on the Oliver Plimott trained Raggamuffin in the Flat Race.

Although it is early in the season and the West Midlands season has yet to begin, two of our jockeys are setting the pace in the Riders Championship with Alex Edwards on 9 winners, James King has 5, while Tommie O’Brien is just beginning to get into full stride.

Edwards rode a double during the Sir W.W. Wynn’s meeting at Bangor-on-Dee after guiding Fleur de Pommier to victory at Larkhill the previous day.

Edwards successes were provided by Goldenbrave’s victory in the Open Maiden for his boss Phil Rowley, the partnership having a length and a quarter to spare over the Nicky Sheppard trained Organised Solution. Edwards had a successful outside ride on Crest for Ray Owen in the Confined, but his hopes of a treble on Optimised were dashed when they were beaten by the Jo Priest trained Alfstar in the Mixed Open.

Chief Sittingbull and Sarah Bowen were a length behind Alright Chief in the Intermediate, while the evergreen Round Robin finished a well beaten second in the Restricted.

Frost caused a 35-minute delay at Buckfastleigh and that combined with a divided Maiden meant it was past four o’clock before the runners for the Intermediate were sent on their way.

James King continued his successful association with the Fran Nimmo/Charlie Post yard by steering Freezing Point to victory in Division II of the short Maiden. The partnership were always in the leading group before powering home in the closing stages. 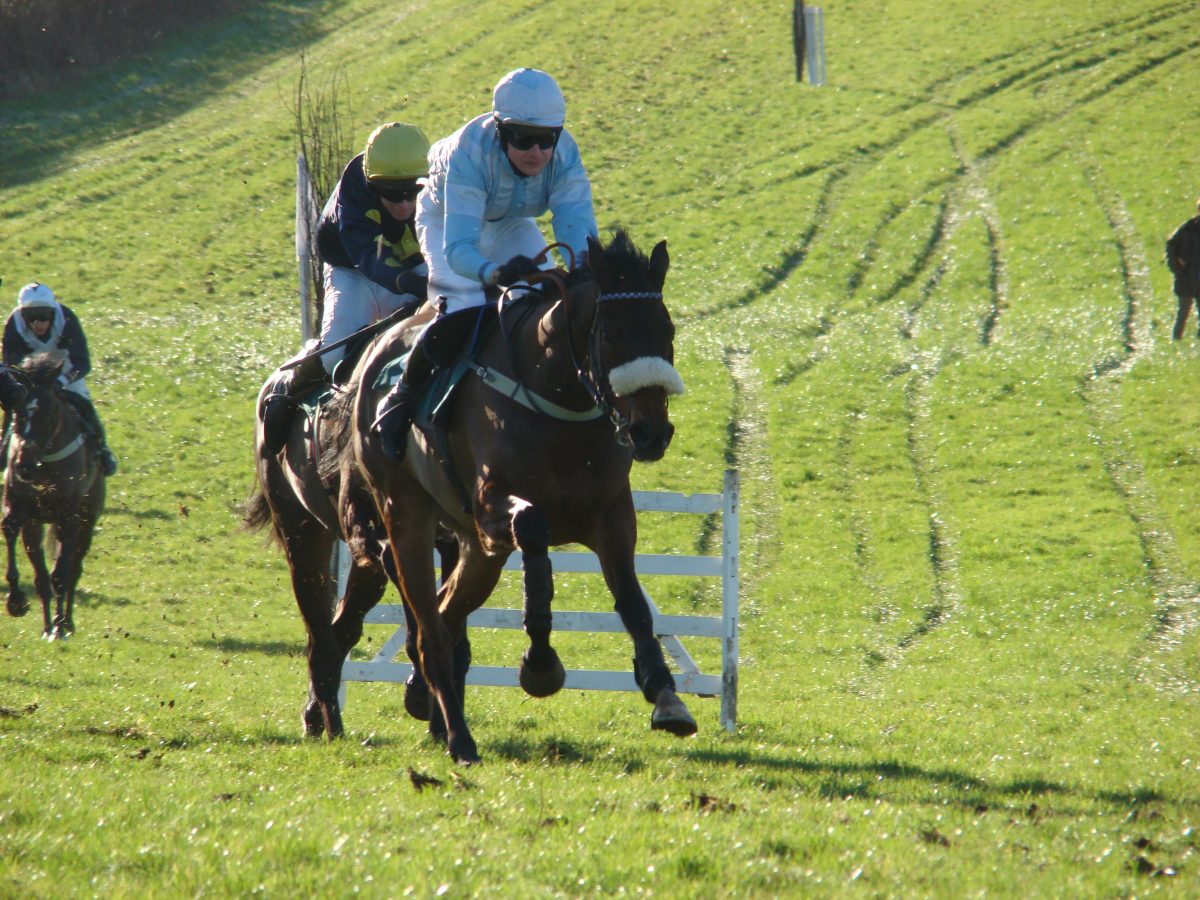 Will Biddick teamed up with Ed Walkers Berkeley qualified mare Gio’s Girl in the Restricted but an early mistake proved costly. The champion literally had to pick the mare up off the floor at the second but he gradually nursed her back into contention. They were putting in their best work at the finish but the damage had been done earlier in the race. 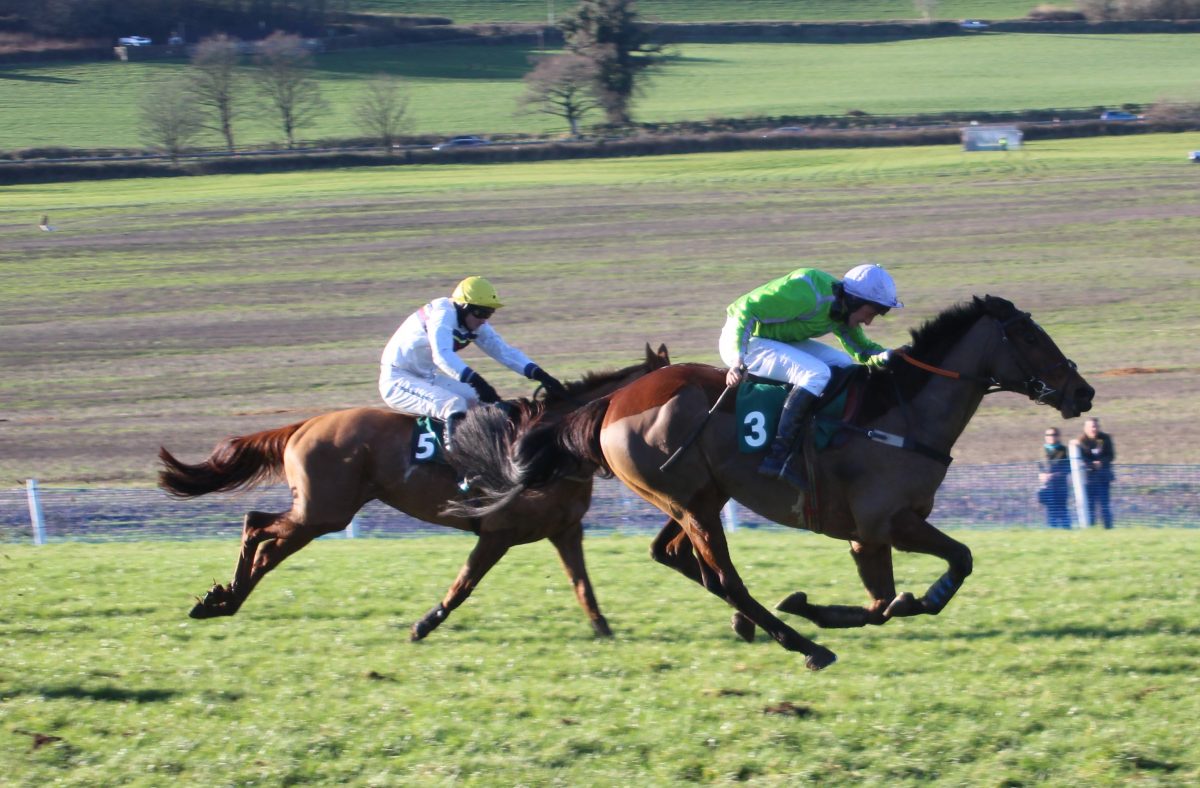 Having finished runner up to an odds-on favourite from Rose Loxton’s yard the previous day, Sam Jukes had to settle for a similar position on Marcle Ridge in the Mixed Open.

The partnership was quickly into their stride but were unable to put any appreciable distance between themselves and their rivals and the odds-on favourite began to loom up ominously at the end of the back straight. 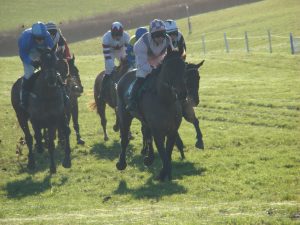 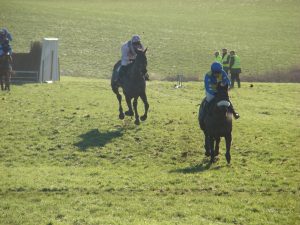 Marcle Ridge managed to stay in contention until they meet the rising ground and was not given a hard race once his chance was gone against multiple Hunter Chase and Point-to-Point winner Caid Du Berlais.

Rye Cross lost touch with the leaders and was wisely pulled after a circuit in the Veteran Conditions but after those disappointments things improved dramatically with the Dymock stable taking the final two races with Gottagottagetaway (Maiden) and Shometheway (Intermediate).

The former carries the colours of Jukes’s farrier Daniel “Sprog” Garlick, who was unseated from the gelding when they made their debut at Larkhill recently. With the owner in Ireland, Jukes took the ride on the 8-year-old who had failed to complete on three previous outings.

The jockeys experience bore fruit as the partnership tracked the leaders before making a forward move halfway down the back straight. It was difficult to see the colours in the evening haze but as they turned back towards home Paschals Dream and Gottagottagetaway had opened up a clear advantage. 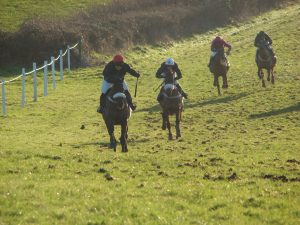 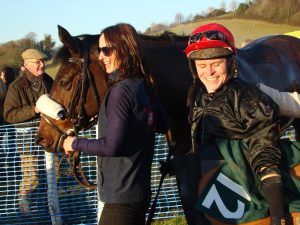 The Cotswold Vale Farmers qualified gelding began to assert as they met the rising ground approaching the last, which they negotiated with an unassailable lead. The 8-year-old began to tire in the heavy ground and Jukes was able to nurse the winner home.

Shometheway had scored in similar conditions at Ffos Las and was sent off favourite for the Intermediate. In contention for most of the way the 7-year-old drew clear up the hill to provide a perfect end to the day for connections with their home bred mare who is a full sister to Marcle Ridge and a half-sister to Nicky Henderson’s exciting hurdler Shiskin. 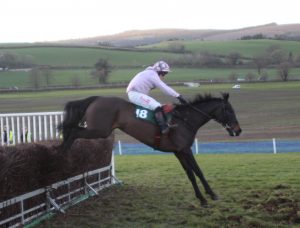 Shometheway scores her second win of the season in the Intermediate

The West Midlands could have several representatives in the Cheltenham Foxhunters on the 13th March with Don Poli and Hazel Hill both showing their well-being following successes the previous weekend.

Don Poli who races under a Croome & West Warwickshire certificate booked his place with a victory at Alnwick Point-to-Point on Saturday afternoon.

The 11-year-old already has two Cheltenham wins to his credit and was purchased by current owner Darren Yates just two days before his run in last season’s Grand National. He said later “It’s all systems go for the Foxhunter and I’m delighted to see him back enjoying himself.
We thought we were in a bit of trouble when Killer Crow came to challenge at the last but Don took one look at him and off, he went.”

Winning rider Tristan Durrell said: ”He was off the bridle two out but stuck his neck out and battled. The course rode softer and more testing than last time.” 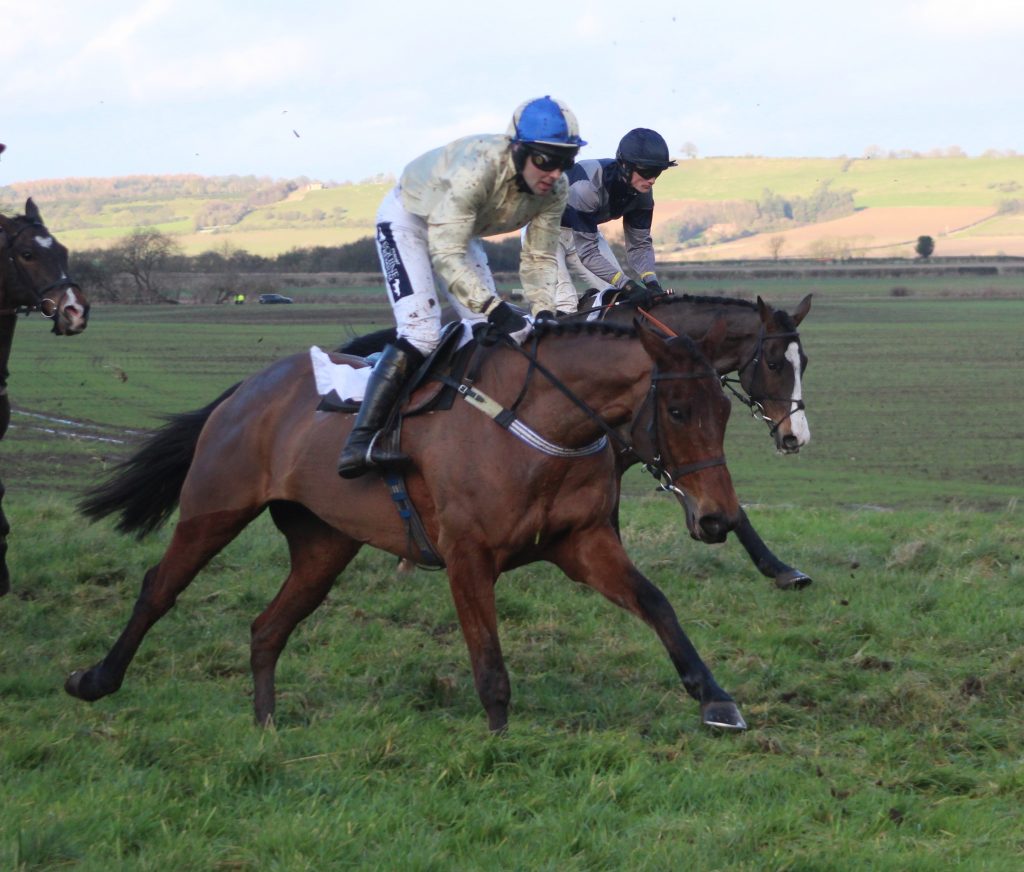 Caroline Robinson ambition to have a runner in the race she won as a jockey back in 1983 were enhanced after TheDellercheckout victory in the Ladies’ Open under her daughter Immy. Successful at Barbury Castle in December the winner easily saw off the challenges of last year’s winner Haymount and the well fancied Irish Anthem. 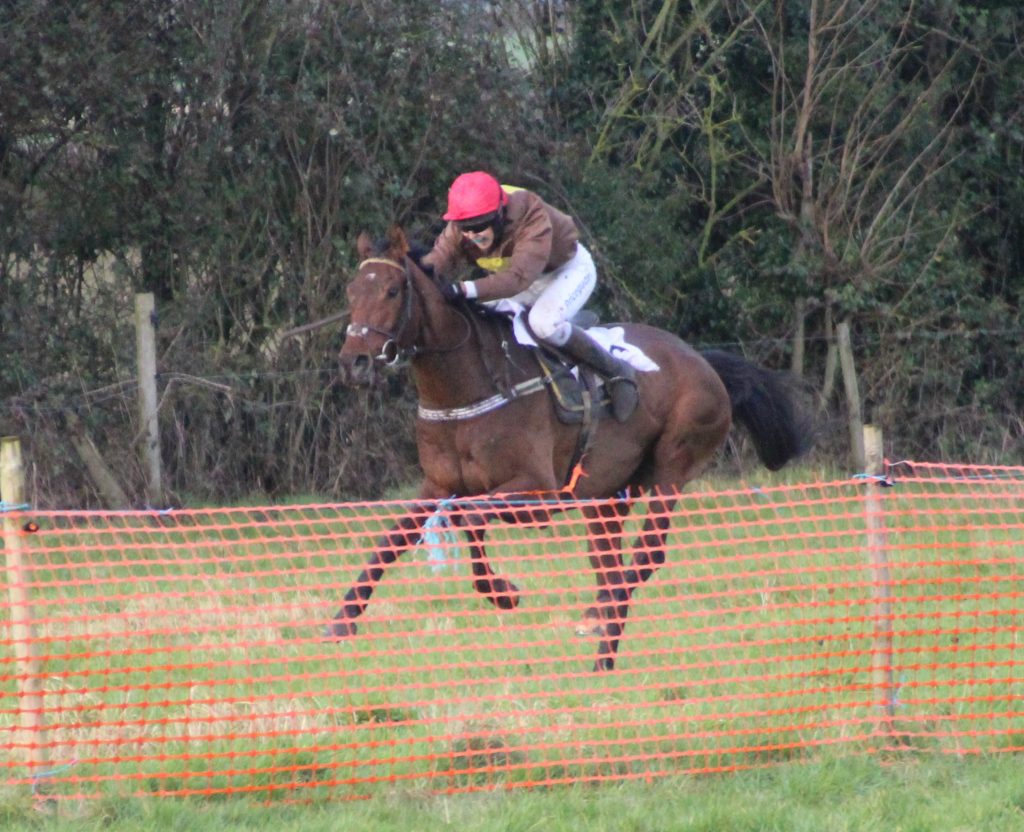 TheDellercheckout hits the bulls eye in the Ladies Open

Two West Midland based jockeys also made the long journey up to Northumberland and both saw their efforts rewarded.

Tommie O’Brien teamed up with the Ollie Pimlott trained Classic Lady in the Open Maiden where she showed improved form compared with her previous effort over the course. “She struck into herself on that occasion,” said Ollie so “We changed tactics here and didn’t make as much use of her”. 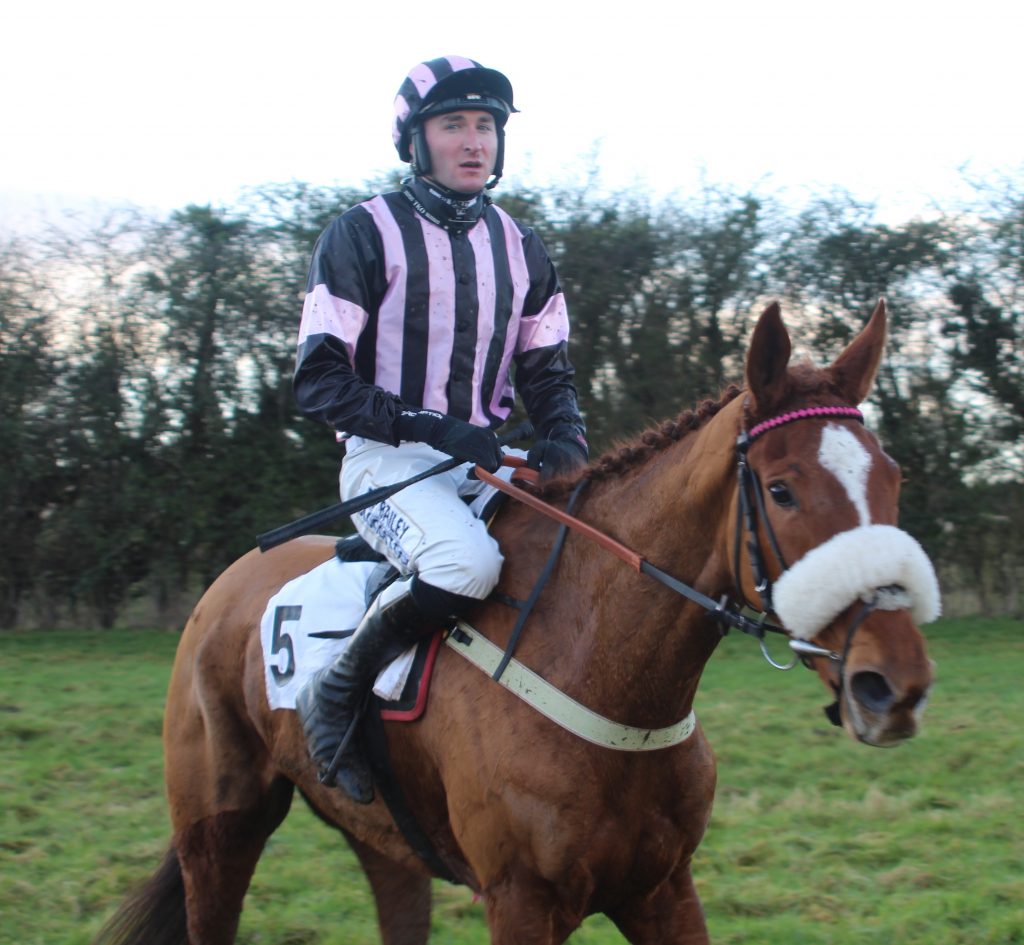 James King partnered the Fran Nimmo trained Ripper Roo in the 2-1/2 mile Maiden and the pair came with a well-timed run to draw clear of the well fancied Commandingpresence at the finish. The winning rider was confident that “better ground and going right-handed will bring about further improvement” 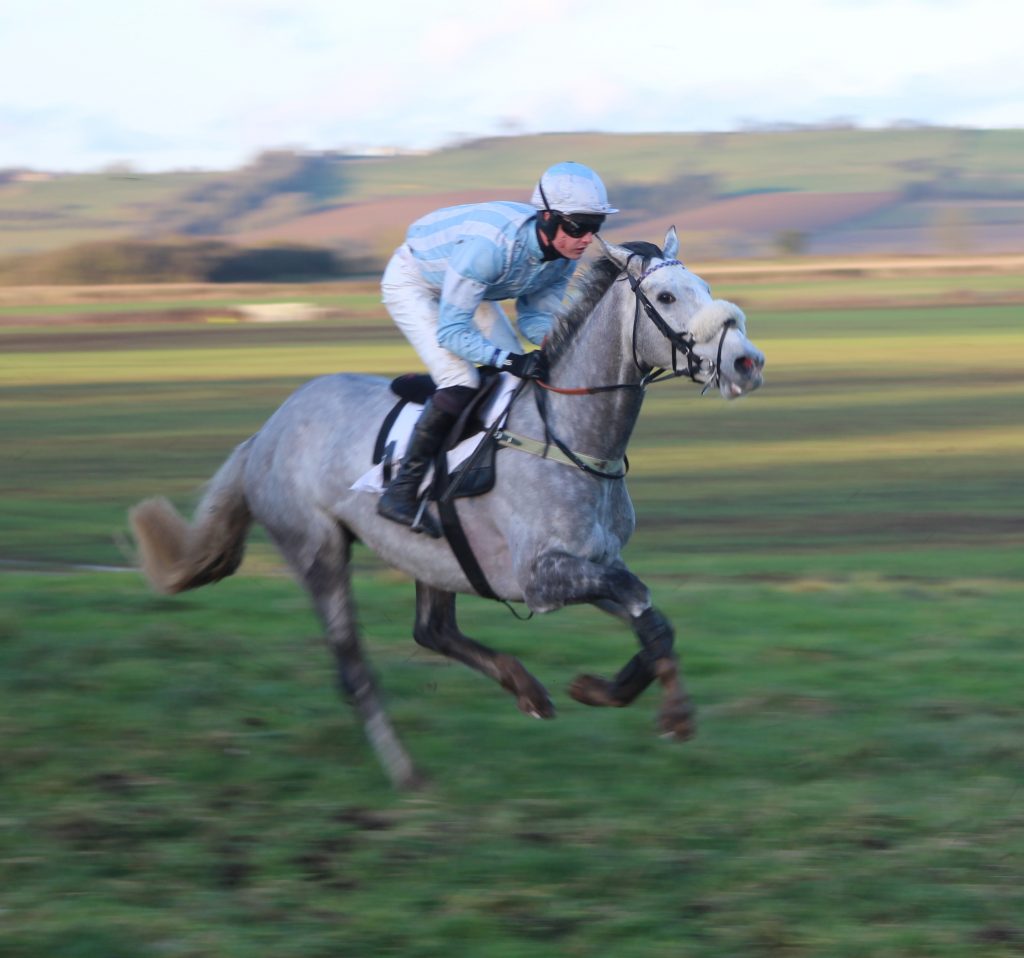 LATEST UPDATE ON FIXTURES ACROSS THE COUNTRY

Fence building – Out with the old [..]
More info