With so many race meetings enduring quagmire like conditions over the last month, the use of the prefix GOOD in going reports has become redundant and the wet weather has led to multiple cancellations.

Didmarton has not been alone in coping with these problems but the organisers deserve great credit for producing good ground in very difficult circumstances, a view shared by connections of the 93 horses who participated over 8 races.

It is safe to say the going during Saturday’s Duke of Beaufort meeting would have been the envy of many N.H. courses, but less than 24 hours later the weather resumed its battle with the sport and that led to the last-minute abandonment of the Blackmore and Sparkford Vale fixture at Charlton Hawthorne.

The Oriental Club (which was founded as a London meeting point for officers and officials who had fought, travelled or traded in India and the East) is backing an innovative new series of Owner/Trainer races which has been designed to give opportunities to those at the grassroots of Point-to-Pointing, and this new initiative got off to a good start with 15 runners lining up to try and win the first race in the series.

As soon as details of The Oriental Club race were published Worcestershire owner Christine Banks decided this provided a window of opportunity for her old favourite Vasco du Mee and that assertion proved correct with the 11-year-old storming to victory.

Order in Court and Mister Robbo were battling for the lead as they disappeared into the dip with half a mile to run, whereas Vasco du Mee was still some way behind in 5th place.

The leading pair continued to pile on the pressure but Josephine Banks’s moved her mount up into a challenging position at the third from home and they continued to make relentless progress approaching the penultimate.

Vasco du Mee swept around the outside of the field on the final bend, took the last with a 3-length advantage which he maintained all the way to the post. 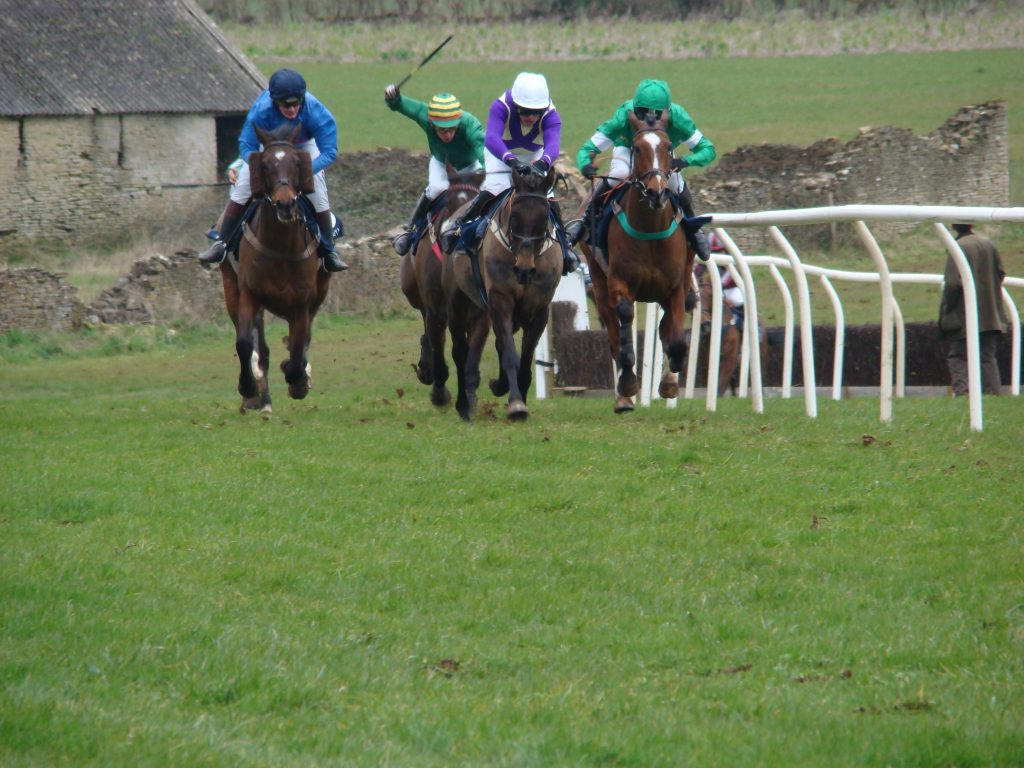 The winner was carrying first time cheek pieces but Mrs Banks did not think this made any difference to his performance “He is what he is, He has ability, it’s getting him to show it that’s the problem. As soon as I saw this series of races in the planner, I thought they were tailor made for him”. 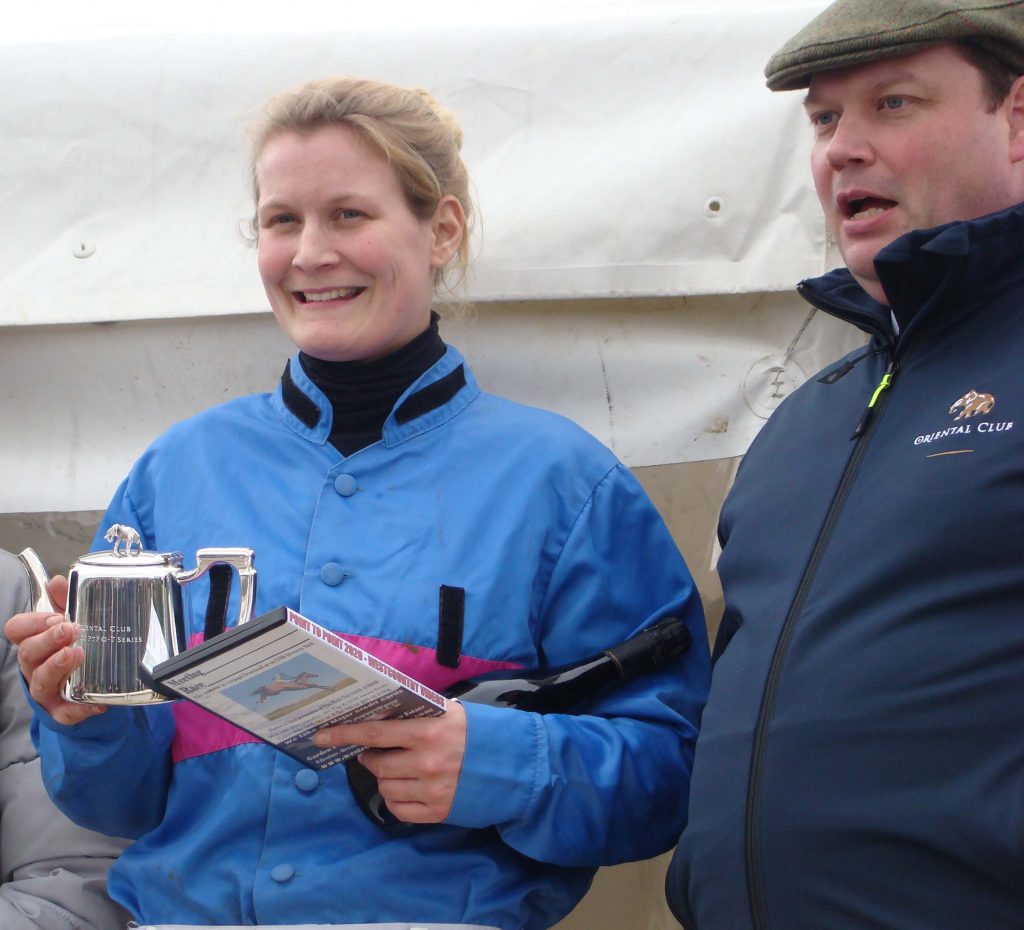 The Dando family have been trying to win the Members at this meeting for half a century and Saturday saw them finally achieve their objective of seeing their family colours carried to victory.

Charlie Dando adopted aggressive tactics on According to Harry who vied for the lead with Come on You and Dancing Dave during the first half of the race before the Little Sodbury based farrier sent his mount to the front with 6 fences to jump.

There was little between Dancing Dave, Handsome Sam and According to Harry at the penultimate but the latter began to gain the upper hand approaching the last. Fly West who had been anchored at the back of the field until local jockey Will Woodman decided to let off the handbrake with 4 fences to jump. They made up a significant amount of ground in the closing stages but According to Harry was always holding their challenge on the flat. 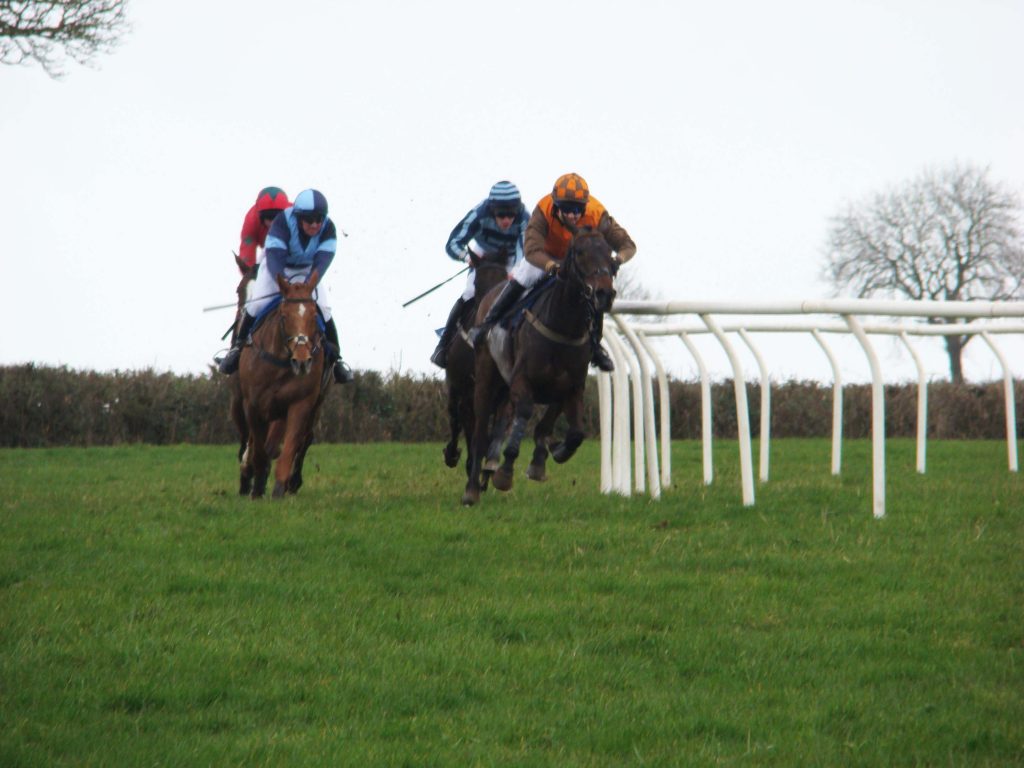 Dando recalled “I saw him at Ascot and liked him but when he failed to find a buyer, I purchased him privately off Nicky Martin. My partner Brooke (Gardener-Wollen) deserves all the credit for this success. She does all the work with him and this is the first time I have sat on him”. 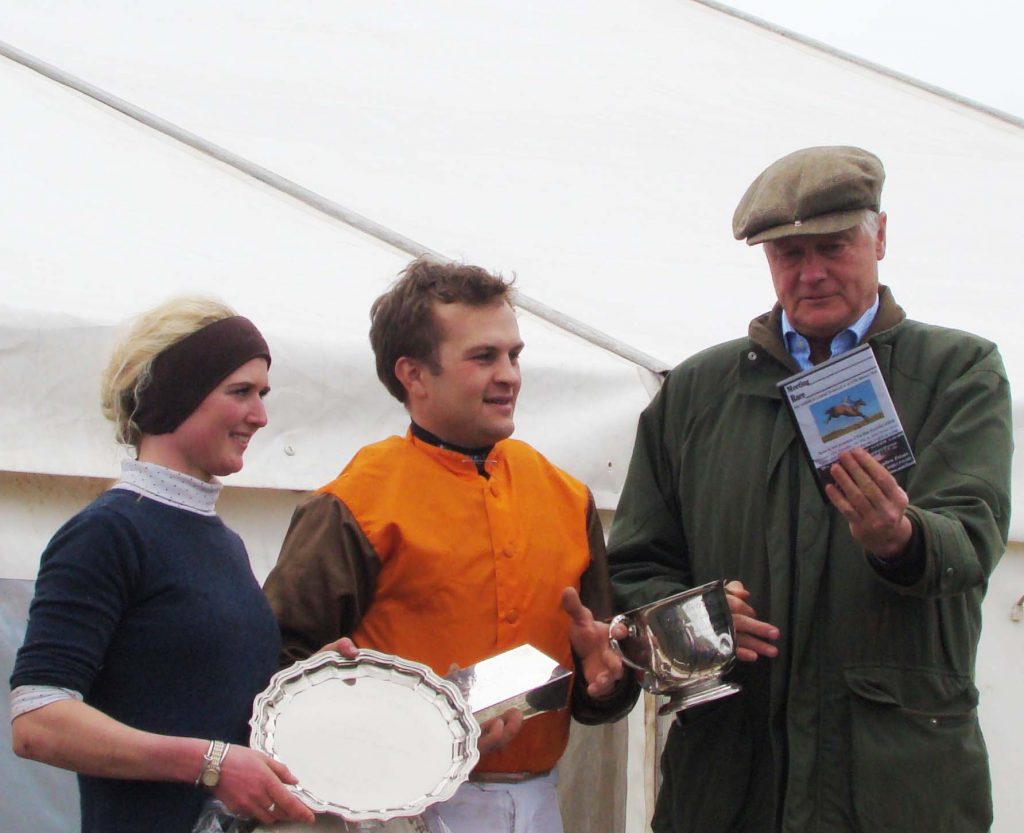 Brooke Gardener-Wollen and Charlie Dando are presented with their prizes

The Intermediate attracted 17 runners which included Getaway Flyer, Miss Massey, Organised Solution, No Limitations, Risky Gold and Teeton Surprise who all had winning form during the current season.

Dando made a bold attempt to land a pillar to post victory on Everbody’s Talkin but despite their best efforts the partnership failed to last home. Organised Solution was backed into favouritism and was still in a prominent position when making an uncharacteristic blunder at the 9th.

Everybody’s Talkin led turning back towards home but was being hotly pursued by Getaway Flyer, No Limitations and Miss Massey, while Miss Seagreen’s stamina was just beginning to kick in.

No Limitations took the lead between the final two fences but Sam Jukes knows his mare well and Miss Seagreen came through to grab a share of the lead as the straightened up for the judge and then held No Limitations renewed challenge on the downhill run to the finish. 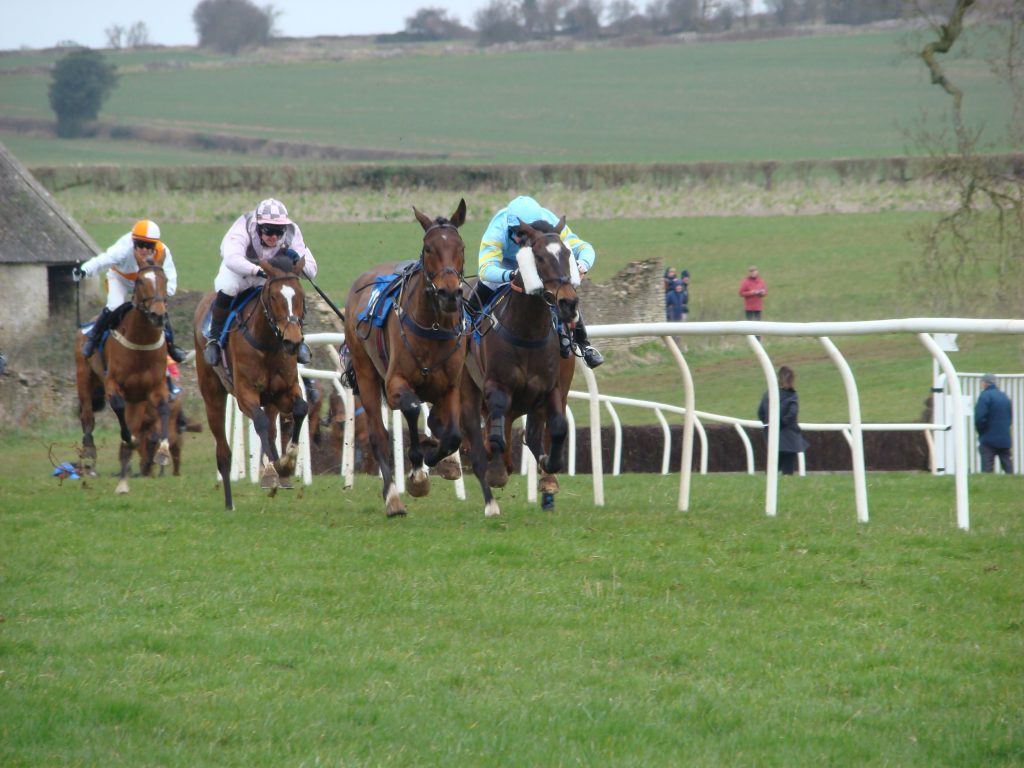 Asked if he was confident he was going to win Jukes replied “No. She hit the last fence at Chaddesley and that cost her the race, and approaching the last I thought the same thing could happen here so I gave her a kick and she jumped the fence perfectly.” Although future plans are still to be decided Opens or the Mares or Intermediate Finals at Cheltenham are potential objectives. 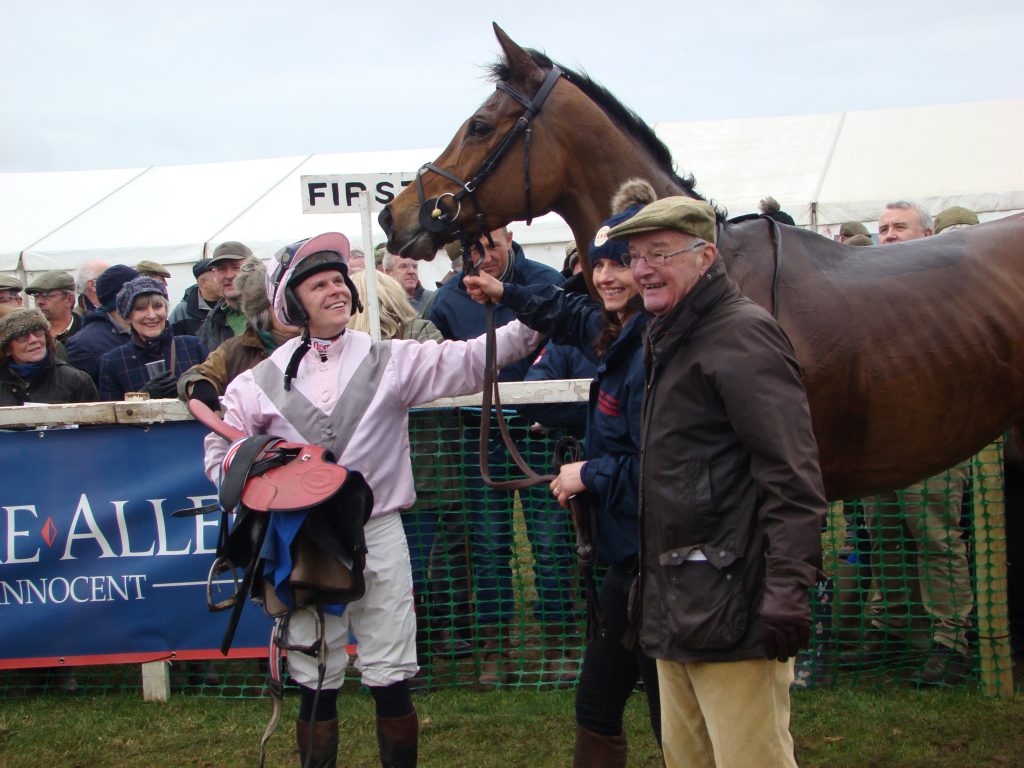 The mare and connections seem pleased with themselves

There was an air of disappointment when just 8 of the 34 entries meet their engagements in the PPORA Club Members Race but it produced an exciting finish. The Sally Randell trained Barney Dwan started favourite on the strength of his impressive win at Cocklebarrow but there was plenty of support for the Phil Rowley trained and Alex Edwards ridden Salvatore.

Templebraden was pulled up at the 9th when still in contention but by this time Barney Dwan and Sam Burton continued to set a searching pace and as they raced downhill with five to jump, they still held a narrow lead over Salvatore. 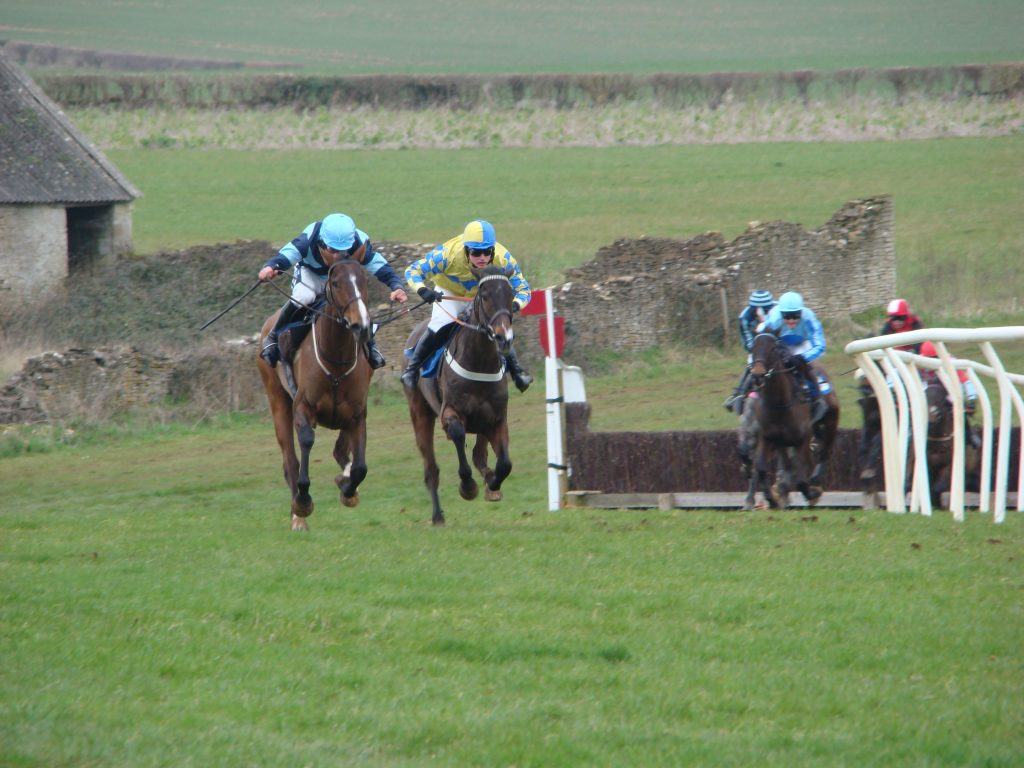 Tb Broke Her was struggling in third place at this point and the two market leaders then went stride for stride over the next two fences. Salvatore started to get the upper hand after two out but was harried all the way down the home straight before the favourite eventually conceded defeat.

The two riders involved in the close finish for the Novice Riders were a credit to their connections and neither deserved to be beaten.

Doc Carver and Rebecca Pugh came through to dispute the lead at the penultimate but no sooner had they done so Ben Bromley brought the favourite The Last but One with a well time run so the pair jumped the last in unison. That looked a race winning manoeuvre, but Miss Pugh refused to accept defeat and forced her mount back up in the shadows of the post to claim a narrow victory. 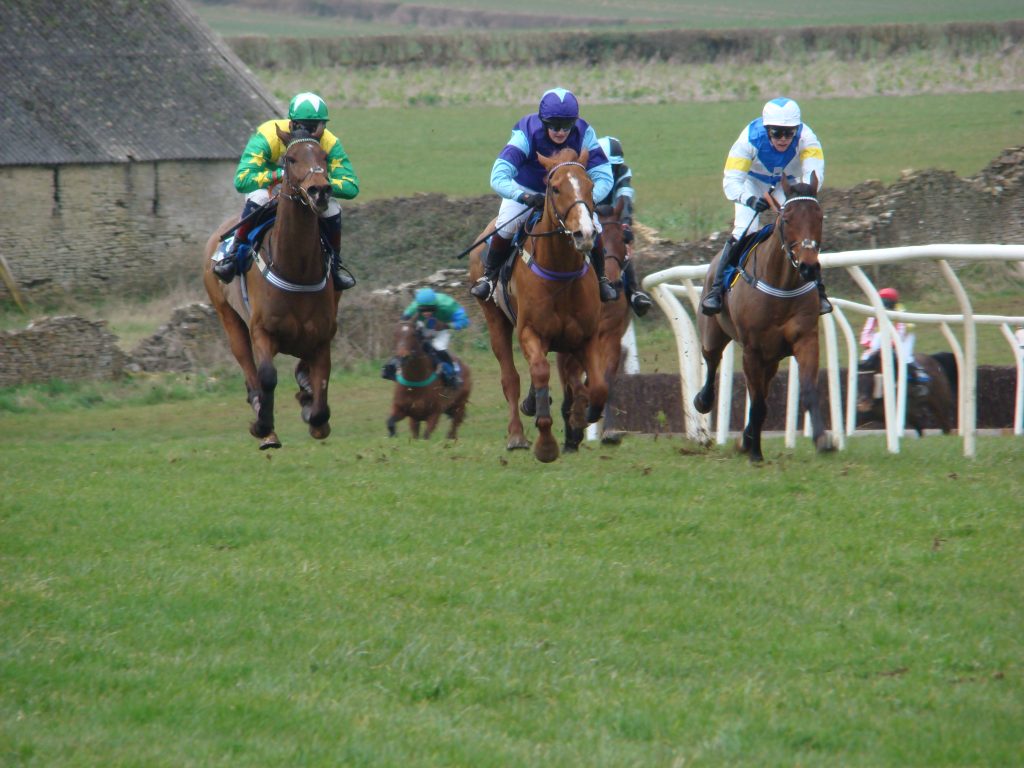 Doc Carver (purple and blue) just head Our Three Sons (inner), while Ben Bromley and The Last But One (outer) are beginning their effort 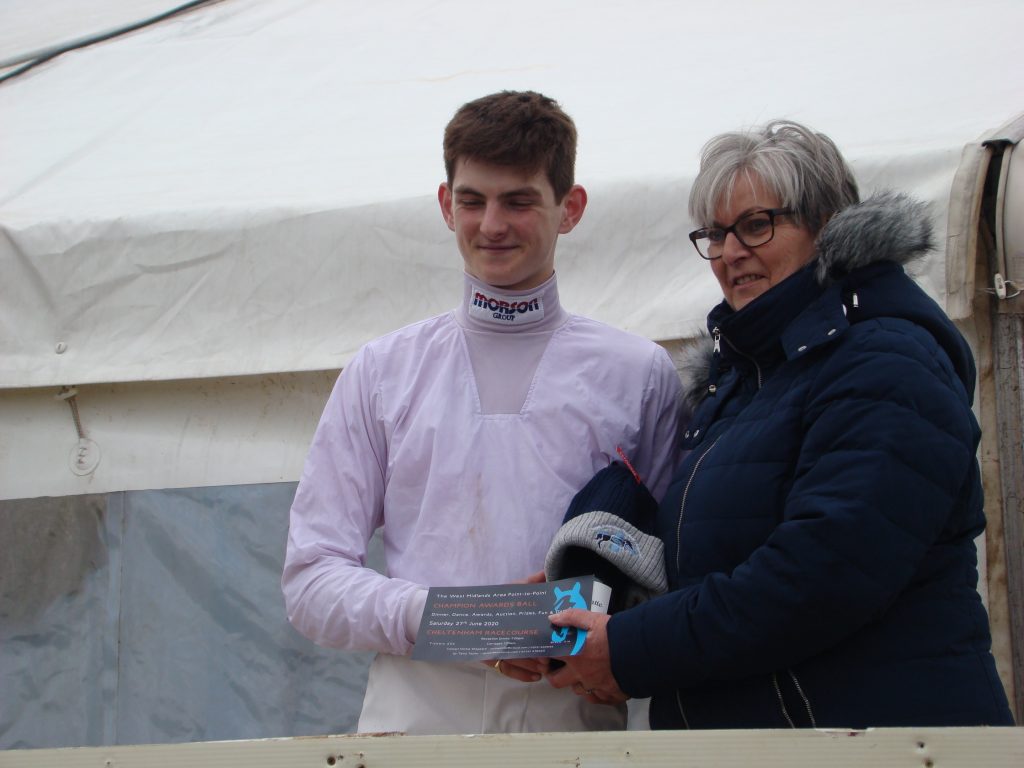 The Last But One’s owner Bloodstock Agent Tom Malone gained compensation later in the afternoon when Milanford benefitted from an enterprising rider from multiple champion Will Biddick.

The partnership led from flag fall but Biddick’s mount kept pulling out extra when challenged and Milanford was able to extend the advantage over his rivals in the home straight.

Various West Midland qualified horses set the pace in the Restricted with Round Robin, Natter Jack Croak and R Bren prominent for the first circuit, but all paid the price in the second half of the race.

Bradley Gibbs and the favourite Premier Magic were in 6th place at the top of the hill, but two fences later they had taken the lead and only Where’s Wilma was able to offer any sort of resistance in the closing stages. There was not much in it on the final bend but Premier Magic finally asserted on the flat. 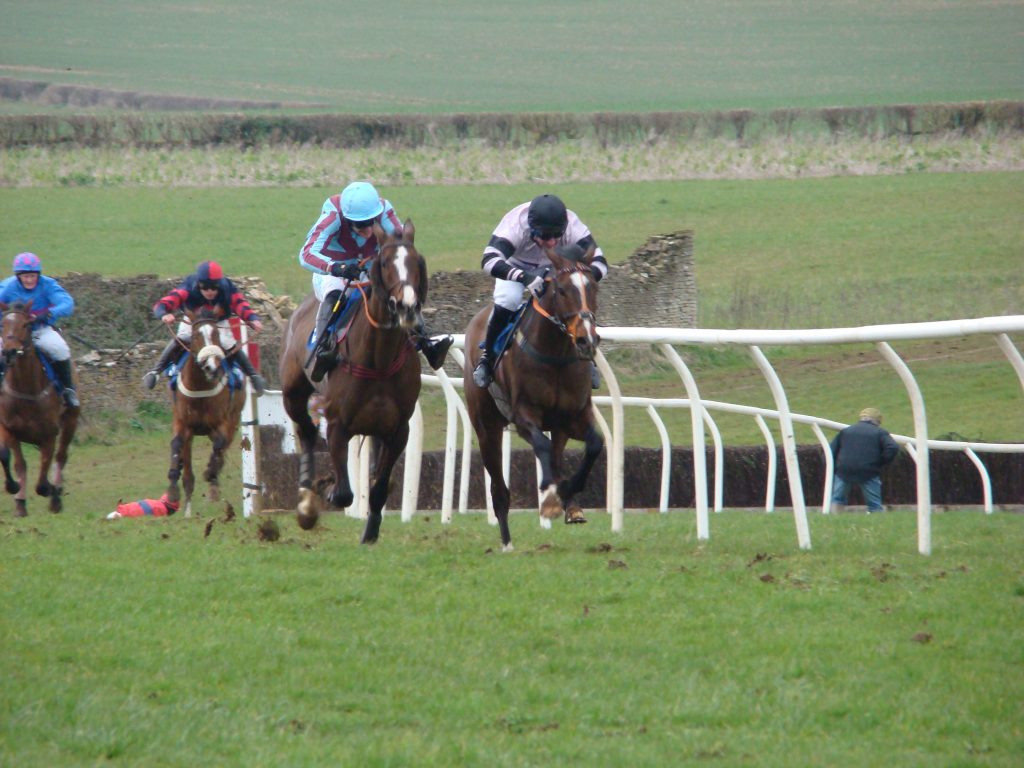 The well supported Ahoy Senor was an early casualty in Division II of the Maiden, but the manner of Smoking Pigeons success suggest he would have had difficulty clinging onto the leader’s coat tails in the final half of the race.

Nick Phillips sent his mount to the front at the start of the second circuit and as they piled on the pressure their rivals dropped away at regular intervals. Smoking Pigeons had the race in his pocket a long way from home and scored an impressive victory despite being eased down on the run in. 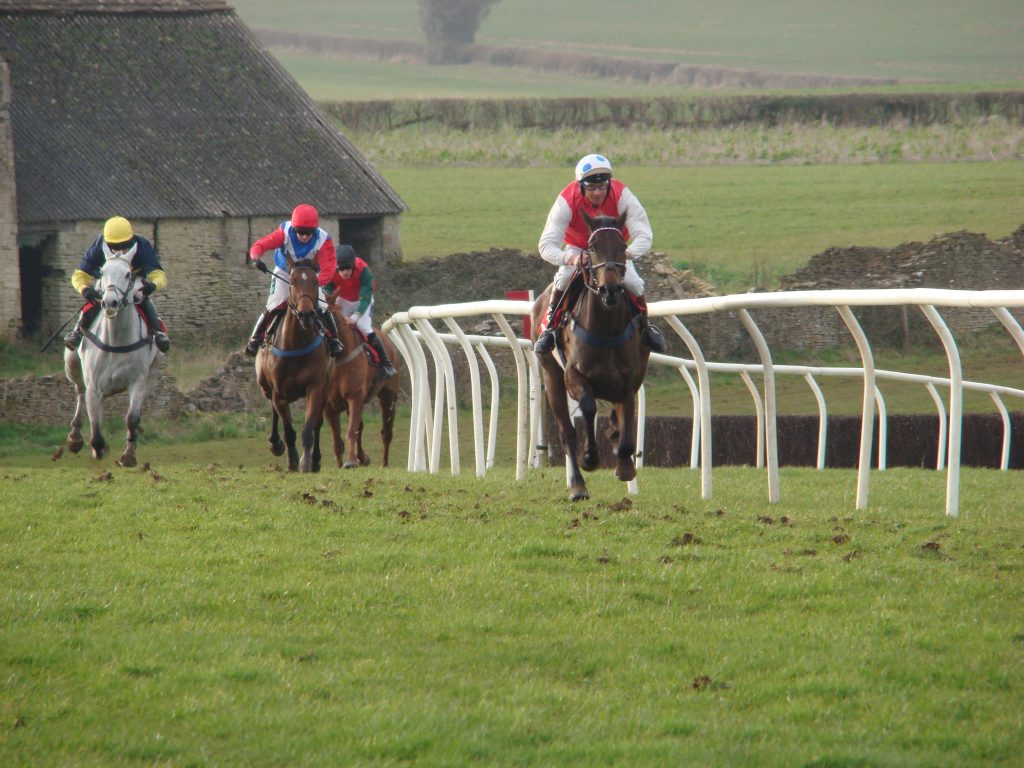 Judith Healey and Nickie Sheppard have been able to secure donations from the following [..]
More info