The Dunsmore Club meeting proved a happy hunting ground for West Midland stables and their supporters who enjoyed an opening day hattrick at the new venue.

Don Bersy’s success in the Mixed Open was another feather in the cap of jockey Bradley Gibbs’s. The 6-year-old has proved quirky at the start in the past and once again showed a reluctance to jump off on level terms with his rivals.

The partnership lost about a dozen lengths and were last as they set off down the back straight but by the end of it, they had stormed into the lead, and we setting such a strong pace that with the exception of the favourite Bishops Road nobody else got a look in.

Don Bersy extended his lead on the final circuit but his earlier antics looked to have taken their toll as Zac Baker and Bishops Road began to reduce their advantage turning back towards home.

Having jumped immaculately up to that point Don Bersy’s mistake at the third from home left the door open for his rival, but Gibbs took a long look round on the final bend and asked his mount for one final effort.

It was the right tactic at the right time because the partnership extended their lead between the final two fences and scored a hard-fought victory in the fastest time of the day. 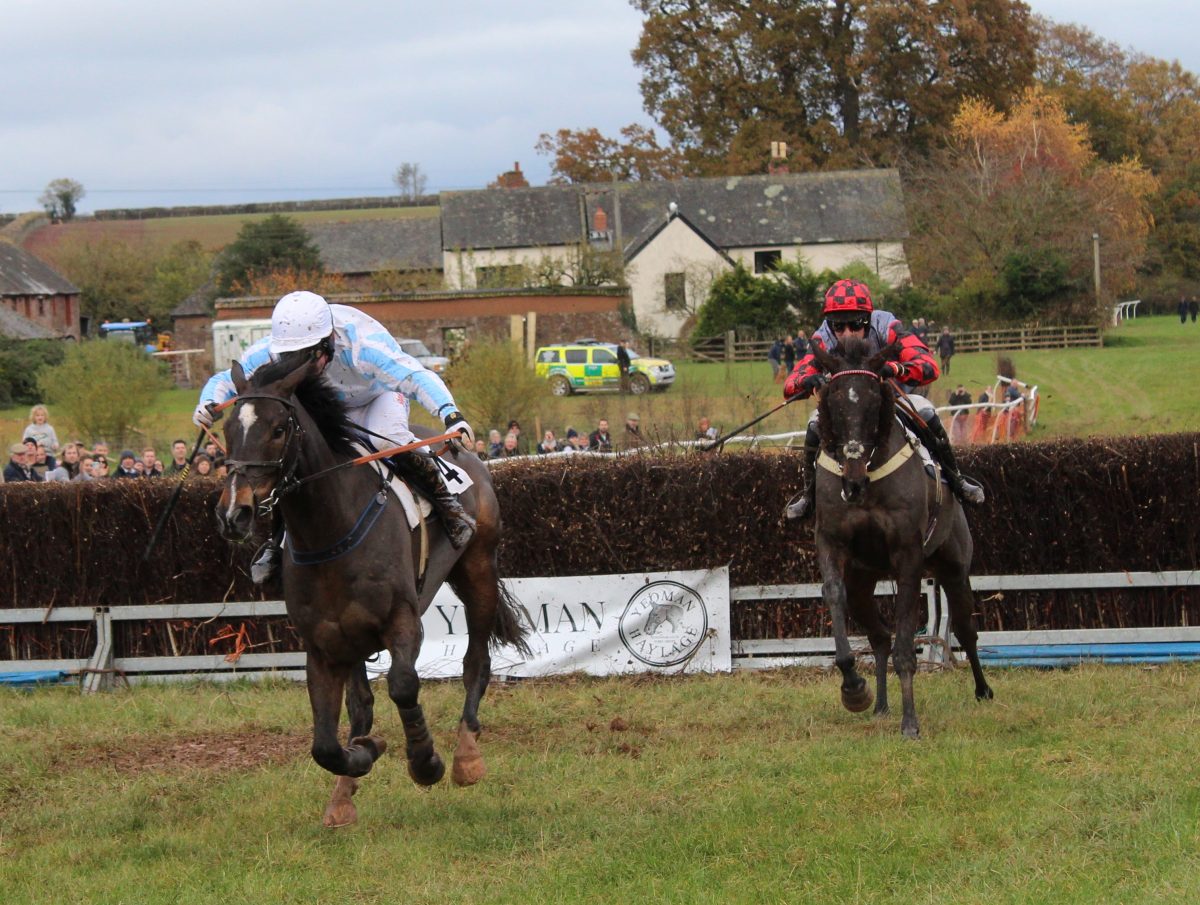 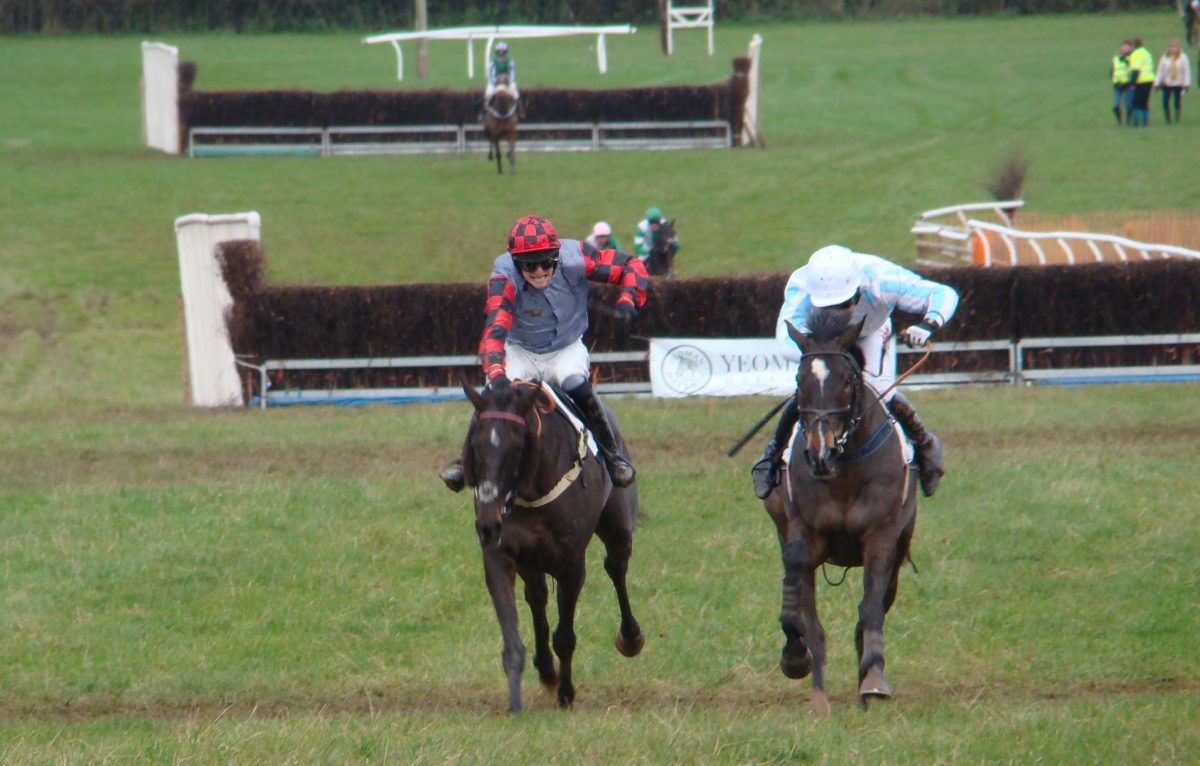 Winning trainer Ryan Potter said after the Ledbury qualified geldings success “Bradley is crucial to this horse. He knows all his quirks and reacts to them. That was some performance as Bradley was putting up 5 lb overweight, but it was worth it. He was better at the start than normal but still lost about a dozen lengths. The horse gets himself fit at home. We are in for a busy season, I am a farrier by trade and along with my partner Emma we have 16 Pointers in this year”.

All bar one of the ten entries lined up for the Conditions and this race provided the most exciting finish of the day, with a short head separating the first two home.

The favourite Summer Sounds was an early casualty, when the horse became unbalanced around the first turn and Alice Stevens excited the side door.

With a circuit to go Evan David moved the West Midland raider Marten up to dispute the lead with Hello George and these two had the race to themselves for the remainder of the contest.

They were in-separable over the final half mile and had a titanic battle all the way up the home straight with neither jockey or horses prepared to concede defeat. 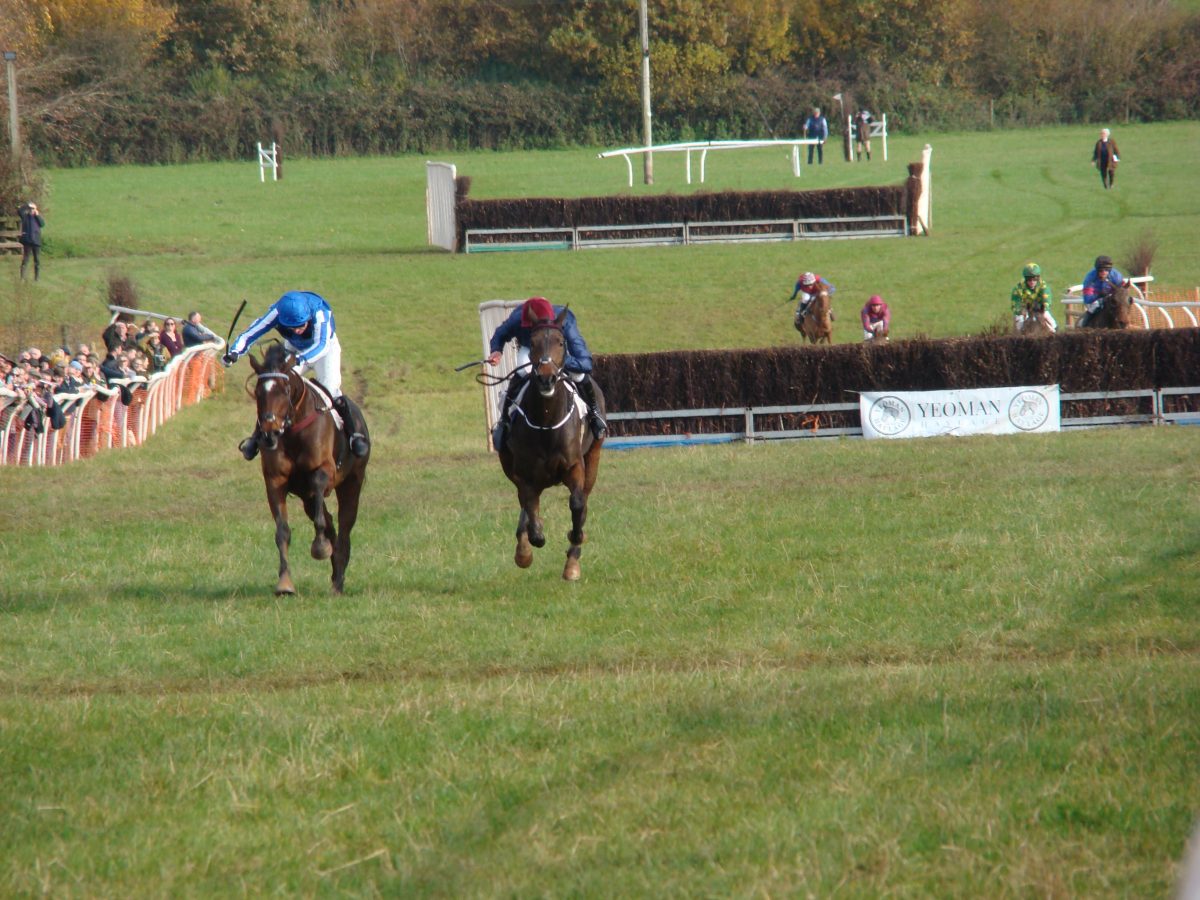 The general consensus was that Marten had prevailed but it took some time before the judge announced his verdict with Evan David’s mount gaining the verdict.

David is an accomplished rider on the Welsh circuit but now works for Cotswold trainer Ben Pauling, which is where the 7-year-old has spent much of his career. He is owned by Lord Vestey and trained by his daughter Mary at her father’s Stowell Park home. She stated she was “both delighted and surprised. He has not won for three years and we have been trying to sweeten him up.” 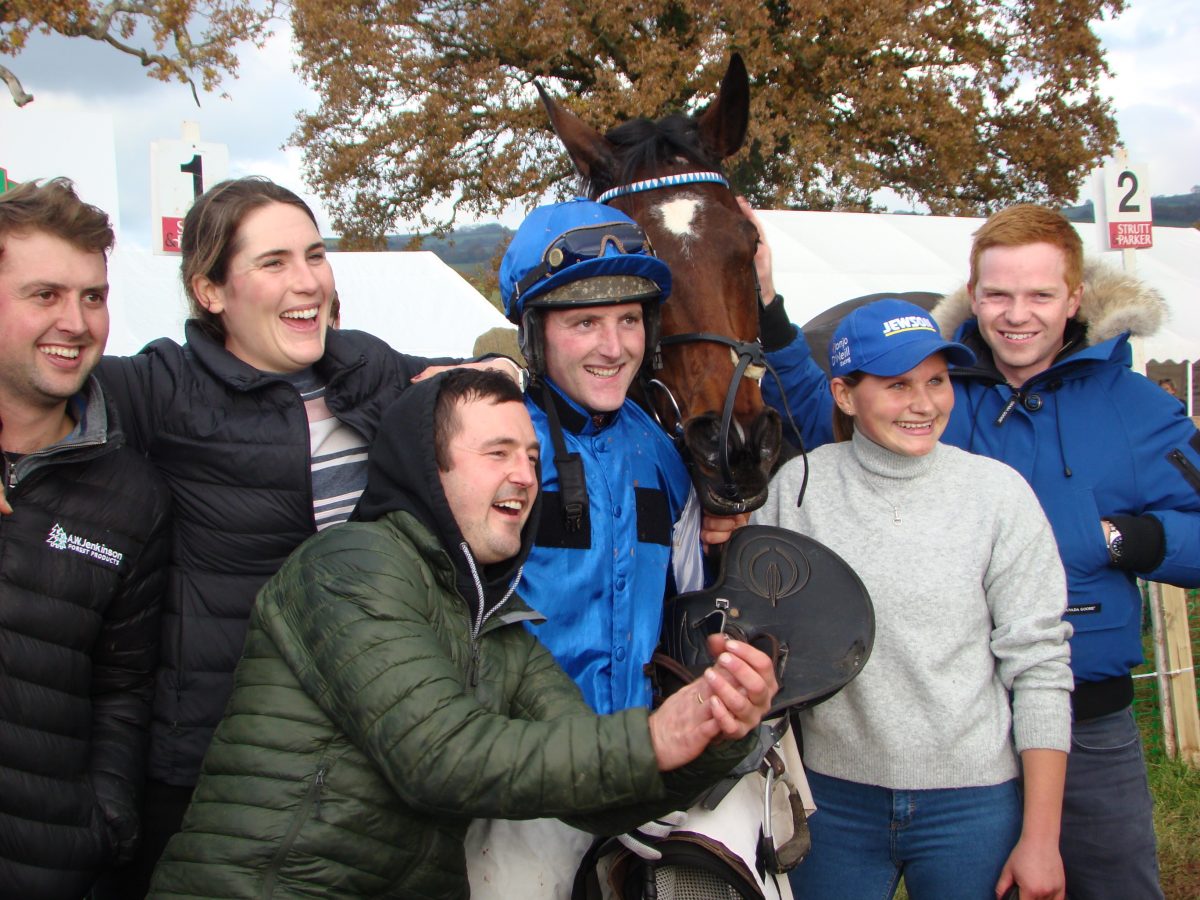 Following two local successes earlier in the afternoon, the bookies were taking no chances with Waterloo Warrior in the Intermediate. The 7-year-old won twice for connections last year and now had the assistance of reigning National Champion Will Biddick.

Biddick had the Jake Slatter trained gelding at the rear of the field for the first couple of circuits but started to take closer order on the final one and soon started to put pressure on chief market rival Robin Why Not.

Both horses were flat to the boards at the fourth from home, but Biddick was oozing confidence as the odds-on favourite drew clear in the home straight. 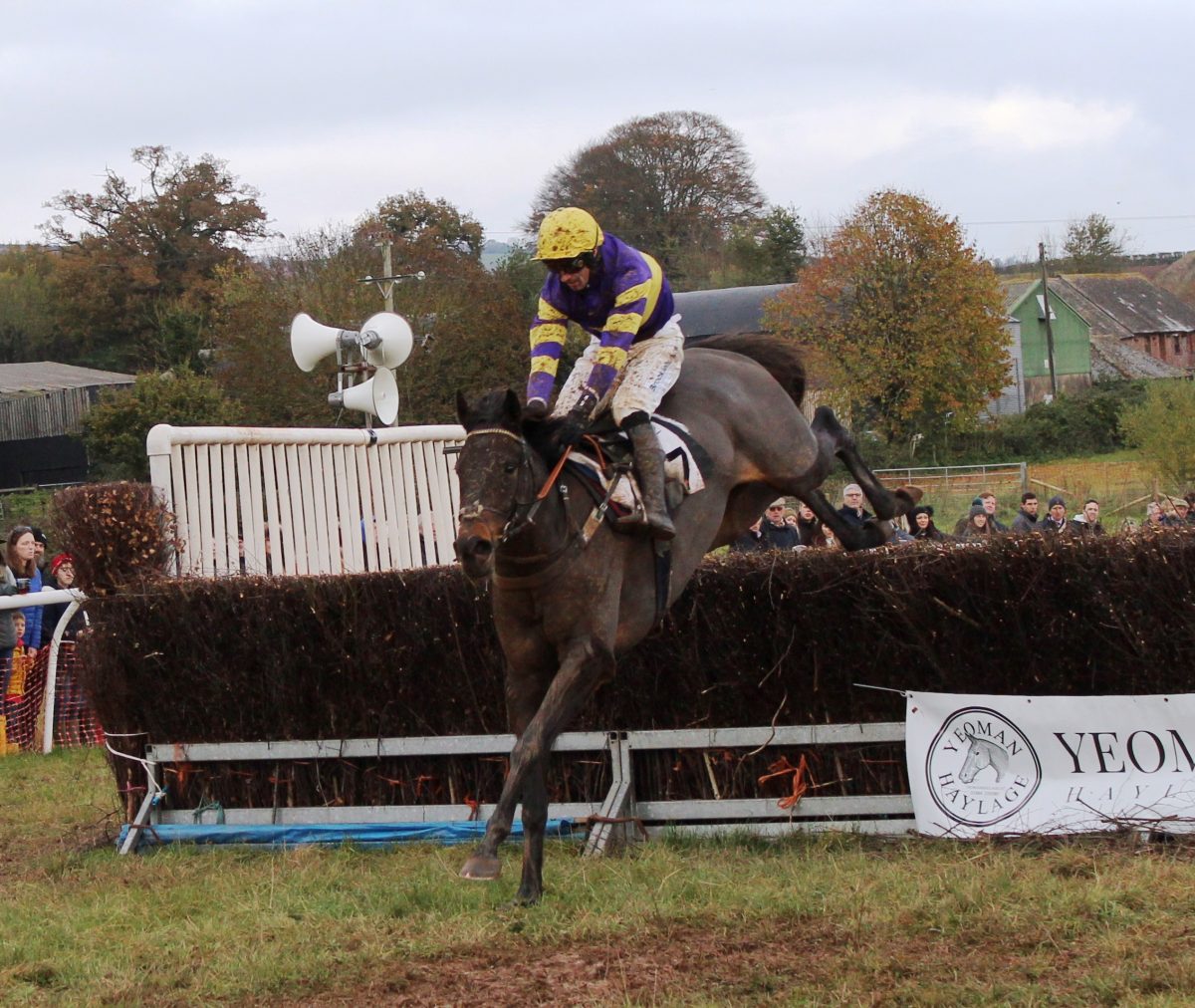 Waterloo Warrior and Will Biddick at the last

Toddington based Slatter was pleased with this performance “He was highly regarded under Rules but failed to get his head in front, but has done that easily today and seems to have benefitted from being in a small yard”. 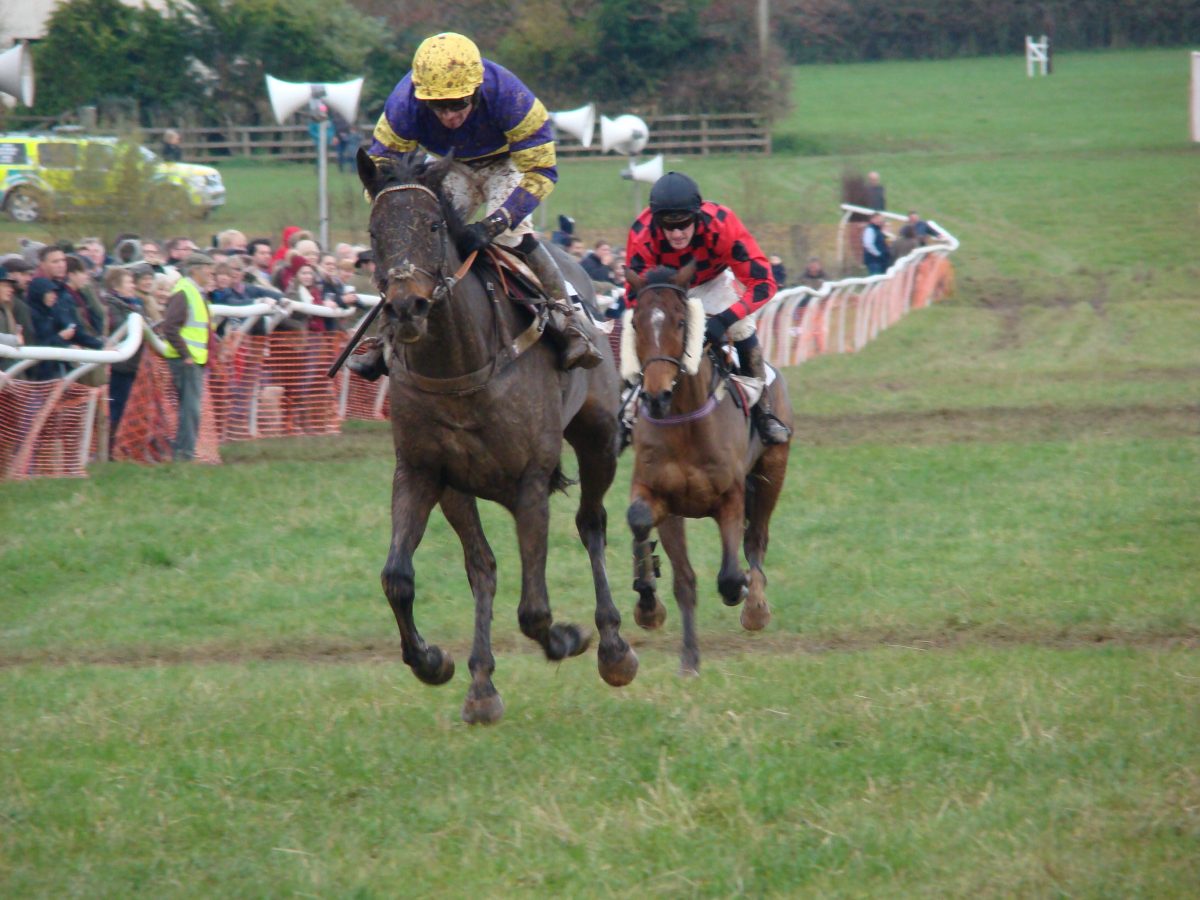 Waterloo Warrior easing down at the finish

“He is the only horse the family (Mum Angela and Dad Ian) have at the moment, although we have a 3-year-old for the new year. We have no gallops and he gets trained in a field around the farm. I might try and win a Men’s Open before Christmas and then go Hunter Chasing”. 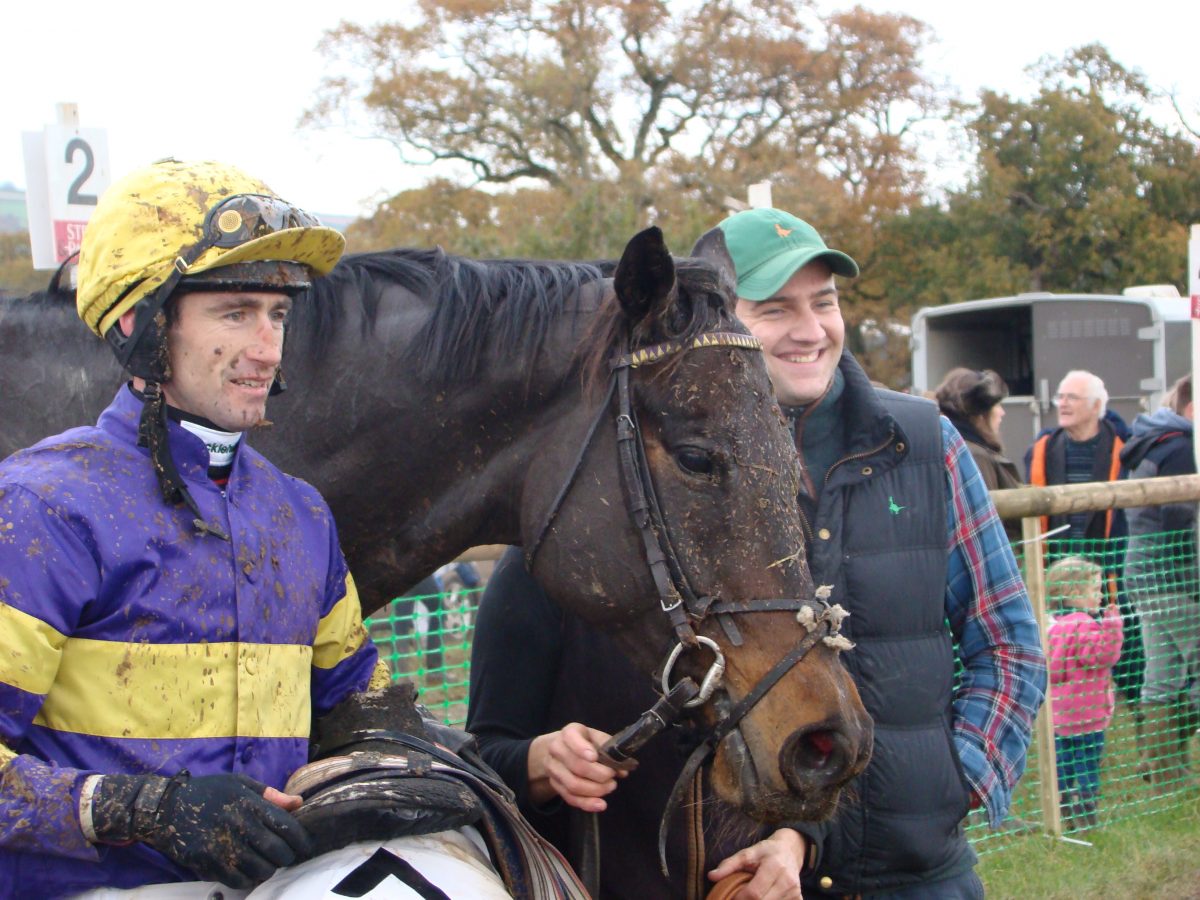 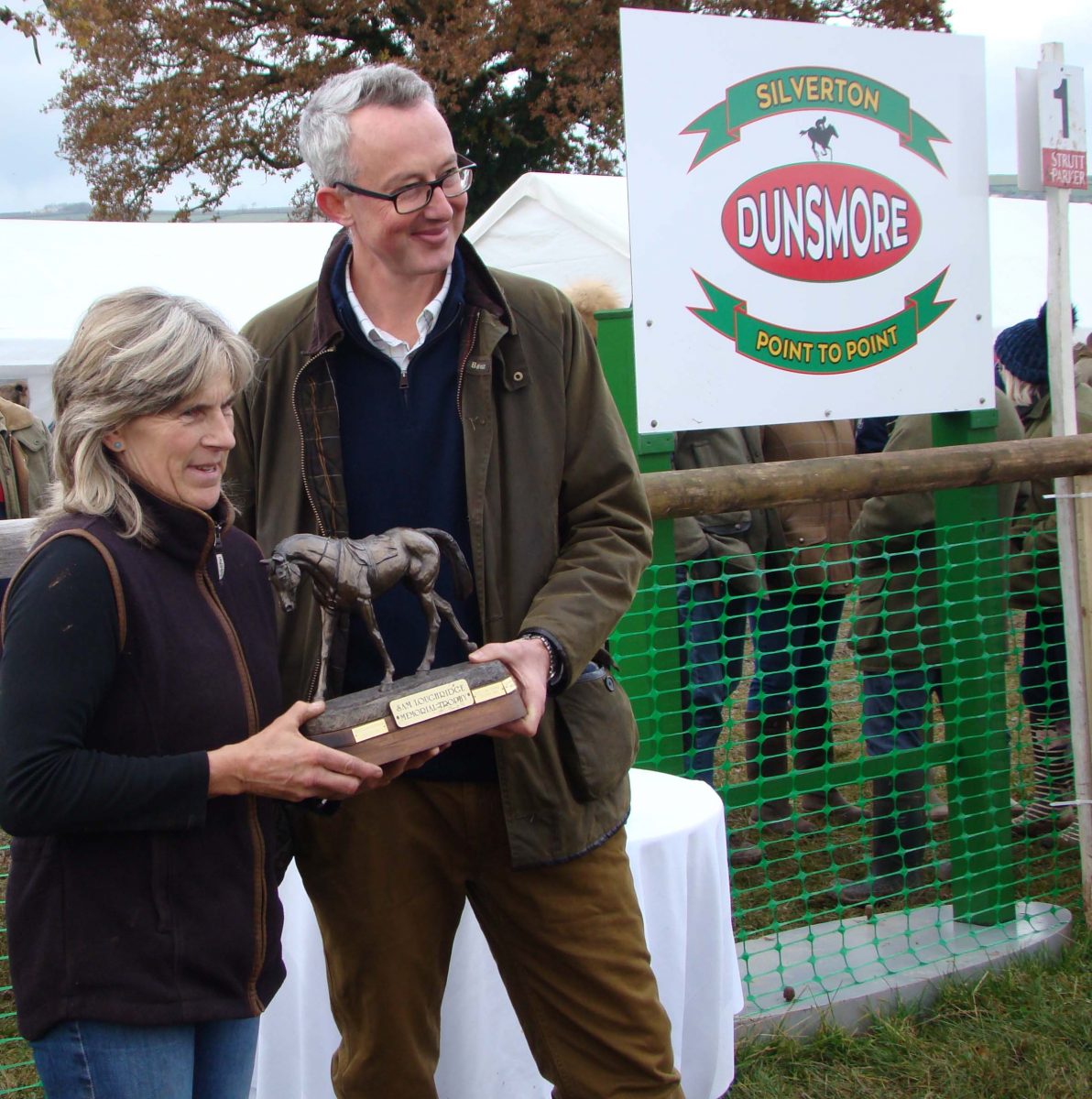 Champion Trainer in 2017/2018 Phil Rowley made a good start to the season with a double at Cottenham where Alex Edwards had the distinction of riding the first winner of the new season on Undisputed because the first race at Dunsmore was delayed for 10 minutes due to the local road accident.

The winner was not winning out of turn having finished in the runners up spot on three occasions last year but benefitted from the departure of the favourite Hawkhurst at the 5th. Edwards’s mount had half a length to spare over Nick Pearce’s Croome & West Warwickshire qualified Workbench, while other local runners Allbarone and Pearls Legend both finished down the field.

Rowley took the Mens Open but not with the horse excepted to prevail as Now Ben and Alex Edwards were pipped at the post by Ben Bromley on Vivaldi Collonges.

The Martin Weston trained and Christine Banks owned Arthurs Secret was taken on and challenged by Ravished and Immy Robinson and that tactic proved successful with the winner scooting around the Cambridgeshire circuit in a very quick time.

Max Comley was out of luck with Cloudy Joker earlier in the afternoon and had to settle for third place with Maximus Maridius in the Restricted, while Phoenix Park and Taboo did better than expected in the Open Maiden.