The 12-year-old was withdrawn from that contest on the morning of the race after veterinary staff noted an irregular heartbeat. Hazel Hill, who is owned by Diana Williams, won the Foxhunter Chase 12 months’ earlier under rider Alex Edwards and was likely to start favourite for this year’s race.

His trainer, Shropshire’s Philip Rowley, said: “He’s fine. He’s out in a field at his owner’s home and Mrs Williams would like to run him again so we’re looking forward to seeing him later in the year.

“Every hunters’ chase runner is physically checked by vets at the races, and they picked up on a slightly irregular heartbeat. At first they weren’t sure, so fetched another ECG machine and then said the horse should not run. 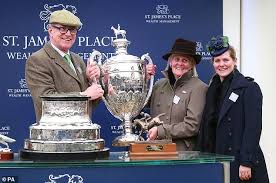 “On the Monday afterwards we had him checked over at home and they couldn’t find anything wrong. It’s a mystery.”

Diana Williams said of the procedure at Cheltenham: “He was fine at rest, but they noticed something when he went into a trot. The consensus was to leave him for two months and give him another proper check over with an ECG machine – there is every chance he will be fine.

“We have owned him since he was a five-year-old and he’s never shown any signs of a problem. When they have a flu jab their hearts are tested, but only at rest, and nothing has shown up.

“If the powers that be think he is okay to go back into training why not? He has been a point-to-pointer all his life, but he has a future after racing because he has such a lovely temperament – I’m sure Jane [her daughter, the former national women’s champion] would find something to do with him.

“At the moment he’s out in a field with a young horse and he looks fantastic. He looked fantastic when he came back from Phil’s, but he was very fit. Now he’s put a bit of flesh on and he has really appreciated the past couple of weeks of warm weather.”

Hazel Hill made his racing debut as a six-year-old, but has never been over-raced, and in his busiest seasons has come under starter’s orders just four times, including when kicking off his career in Irish point-to-points. In the season which recently ended prematurely he ran twice, winning an open race at Sheriff Hutton before finishing second to Minella Rocco at Wetherby.