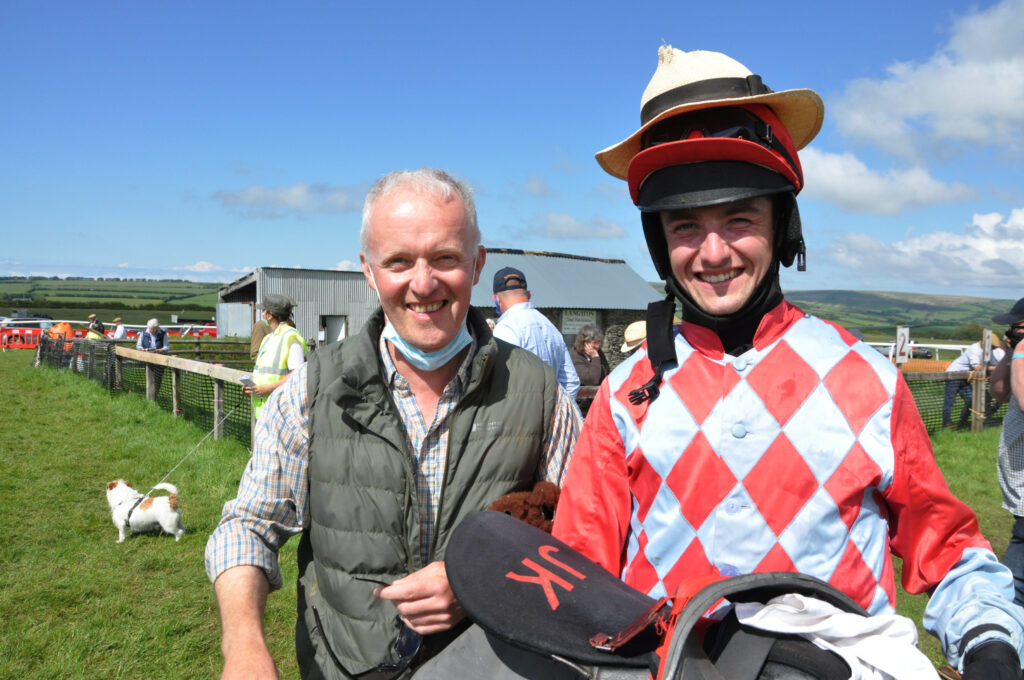 James King – 25 – enjoyed an annus mirabilis last season when winning his first jockeys championship, his 33 victories (all gained since racing resumed after lockdown) being more than double the total of his nearest pursuer. Not only that, he won his second Aintree Foxhunters on Cousin Pascal and produced five winners from just eight starts from his two-horse string as he embarked upon his training career. Son of former racing post journalist Andrew and nephew of leading owner-trainer Jason Warner, James rode his first winner aged 17 and hit the headlines four years later when champion amateur under rules. Jake Exelby paid him a visit at his Ettington base, to find out why it’s all been going right for him since April and how he hopes to emulate that success in the 2021/2022 campaign.

Brought up in Rodborough, near Stroud in Gloucestershire, James admits to “Always being horsey. I played a lot of sport – I’m still a keen cricketer and play, as a fast bowler, for Tusmore CC every few weeks – but I’d cycle home from school as fast as I could to help out at the riding school at nearby Barton End, where I went for ten years until I was 17. I did pony club, and hunted with the Beaufort – I used to take Monday morning off school and hack my ponies to the meet.”

“I rode out for local trainers Tim Cox and Tim Sage,” continues James, “And it was for the latter that I had my first ride – and win – on Presentandcorrect at Lockinge on Easter Monday 2013. It didn’t really sink in, because I didn’t have another ride until the next season. I ended up winning the same race for my second success!”

At the time, James was working for multiple champion trainer Paul Nicholls, where he spent three years. “It was when the likes of Darryl Jacob, Sam Twiston-Davies and Will Biddick were there. I became good friends with Will and ended up working for him,” he tells me. Between Messrs Nicholls and Biddick, he spent two years with Neil Mulholland, where he was based in 2016-2017, when Neil trained over 100 winners and James rode 19 – five for his boss – as he won the amateurs title. “I was also leading Hunter Chase rider the previous year,” James reminds me, “With five wins, including three on Grandioso for Steve Flook. I’ve also ridden for a lot of Welsh trainers, who I’ve got to know through the Bowens (Mickey Bowen trained Dineur, his first Aintree Foxhunters winner in 2017) as well as the Slatter family, who have been good to me.”

James – who rides out at least four times a week for rules trainer Olly Murphy – is now in his third season as stable jockey for Station Yard racing, run by Fran (nee Nimmo) and Charlie Poste. He tells me how their association developed. “My first mount for them was a winner – One Touch at Badbury Rings in 2018. Due to other commitments, I didn’t ride another for the yard for a year and Whateva Next won at Guilsborough. Charlie approached me for the full-time role after that.”

James counts the aforementioned One Touch – “I gave it one of my worst rides ever and we still won going away! He’s rated 130 under rules and still hasn’t shown his full potential,” – and Chaddesley Corbett winner Dondiam as the best youngsters he’s ridden for Fran and Charlie and gave me three to follow from the stable for next season in the shape of, “A Presenting out of Jay Lo, a Soldier Of Fortune gelding out of Saltbarrow and Boy De La Vis, who’s by Diamond Boy.”

An obvious question – given his enviable record both between the flags and under rules – is whether James has considered turning professional. “I’d rather be a big fish in a small pond,” he replies candidly, “Than have to start from scratch and struggle for rides. It’s going well at the moment and I’ve ridden two Aintree Foxhunters winners. I’d love to have a winner at Cheltenham though,” he admits. “Especially the Foxhunters. It’s my local track and I’ve been placed there, but never better than that.”

He has a firm view on young amateur jockeys turning professional. ““It’s alright for the likes of the Bowen brothers and Conor Brace, who have the backing, but some of them need their heads banging together,” he opines – without naming names. “They turn conditional at 16 or 17, struggle and wonder why. They’d be better off spending more time in points, learning their trade – and learning from their mistakes. Take the likes of Sean Houlihan, Ben Jones, David Noonan and Lorcan Williams. They rode in points for a few seasons before going pro – and it’s helped them.”

“I just want to stay injury free and ride as many winners as possible and to keep riding while I’m still enjoying it – although I don’t think I’ll go on as long as Phil York!” adds James of his ambitions. “I’d like to be champion again next year but it will be a hard task against the likes of Jack Andrews, Will Biddick and Bradley Gibbs. I think Bradley will win it next year,” James confesses. “He’s growing as a trainer, his horses run consistently, and Welsh pointing is back – that’s the key thing.”

Looking back rather than forward, James is at a loss to explain why 2020/2021 went so well for him, particularly after lockdown. “I suppose I was lucky to ride fit, healthy horses,” he suggests. “Fran and Charlie’s were in great form – they kept the horses going during the break so they came back fit and healthy – and (uncle) Jason Warner supported me, as did his other trainers Kieran and Luke Price.” “It’s like being a striker in football,” James muses. “When you have success, you grow in confidence. I was riding the horses as I found them, rather than being tied down to instructions, which I used to take too literally. I’d also watch my mount’s previous runs – the live streaming was great for that – and see what suited the horse best.”

During lockdown, James got together with girlfriend Sophie Ardern, who’s worked for Fran and Charlie for five years and who laughs ironically when I described her as the secret of his success last season. “I’ve never known anyone sleep as much as him,” she smiles when I ask what he’s like. “I can understand it during the height of the season, but he’s normally asleep by half past eight.” James sheepishly agrees. “I get so wrapped up in the horses that all I like to do afterwards is relax and see friends – I hate late nights!”

“Cothelstone in May was the turning point,” James says – changing the subject – of his championship ambitions last season. “I had four rides. The first two fell – at the same fence on the second circuit – and I knew my ankle was playing up, but the next two won, and Thumb Stone Blue beating Jack Andrews on Chameron gave me the upper hand.”

Talk of ‘Thumb’ leads me to ask about James’ own string. “I knew they’d need a run before lockdown,” he admits. “So I left some room for improvement, gave them January off and let them down, then had five winners from six when racing resumed – and Always Lion was going well when he broke down at Garthorpe.” An obvious question, given James’ impressive start to his training career, is whether he plans to expand. “I’m just playing around with two horses at the moment,” he says modestly. “I’m too busy to take it more seriously. Fran and Charlie are good to me, letting me keep my horses here, but it’s still early days and I’m enjoying the riding too much.”

James has his horses at Fran and Charlie’s overflow yard and this year, Thumb Stone Blues has been joined by the former Dan Skelton inmate Durl Rock, who had three runs for Dan Skelton. “He was turned out last year and has done well for a break,” confirms James. “He’ll be out early and I’ll look for an older horse Maiden on nice ground and preferably left-handed. ‘Thumb’ will turn 12 in January and won’t run more than once a month. He’ll go for Opens and Veterans races, although I think he gets a penalty in those. While he’s better left-handed, he’s versatile and goes on any track and going. We may target the Lady Dudley Cup with him.”

His routine is that of a true workaholic! “I finish at Fran and Charlie’s,” James tells me, “Then drive up to the other yard and get the horses out of the field. Then I saddle one up, ride it down to the yard leading the other, who I put on the horse-walker. I canter or gallop the first, then do the same routine in reverse.” And that’s when he’s not riding out for Olly Murphy, or hunting his pair with the Croome & West Warwickshire! “I’ve taken bits and bobs from everyone I’ve worked for,” James replies when I ask about the influences on his training regime. “I don’t style myself on anyone in particular, although I learnt a lot from Paul Nicholls and I do a few things similarly to Richard Newland, who I used to ride for.”

James’ success was notable for him being based in the South Midlands – arguably the most competitive area in the country, with the top three trainers, male and female champion jockeys and both leading novice riders being based in the region. “Along with the West Midlands, I think we have the best racing,” agreed James. “But things move on – a few years ago it was the West Country, with the likes of Jack Barber and Ed Walker. Times are changing, and the sport is getting more commercial and professional with the four-year-olds, although smaller trainers like Julie Wadland and the Slatters are holding their own and the Oriental Club series is a good innovation.”

So how does he see next season going after two years of curtailed racing due to COVID-19? “While lots of horses went under rules, pointing was still well-supported, with competitive racing and double-figure fields. However, that may not be sustainable again with more races and a longer season – I think owners and trainers will run their horses every four or five weeks, rather than every two to three.”

While James has only been involved in pointing since 2013, he has strong opinions on the sport, including the state of pointing this side of the water compared to the Irish scene. “The results at the Cheltenham Festival showed how far ahead they are. British pointing needs to keep up with them and get similar results at the sales. For us, the sport can be more like fun. Although…” he goes on, “Our pointers won both Foxhunters – and an English horse won the Irish Champion Hunter Chase.”

Asked for a final word, James is quick to thank Fran, Charlie and the whole team at Station Yard before singing the praises of his uncle Jason Warner. “I’d never ridden a winner for Jason before last season,” he admits. “Infact, I’ve hardly ever ridden for him in the past. But I rode 12 of his winners in 2021 and our link-up has gone swimmingly. Jason’s a traditionalist, a great supporter of the game, who lives and breathes pointing – he’s probably on the phone as we speak trying to buy another horse!”