The three meetings held so far have wetted the appetite of the sports supporters, but with Covid refusing to release its stranglehold, what was regarded as normal in the past has been replaced by something which would have been unrecognizable a year ago.

Each meeting faces its own challenges and one is left to wonder how many hours have been spent getting us to where we are now, and how many more will be required in the future.

The main feature of these early meetings has been the strike rate enjoyed by Will Biddick and Alex Edwards. Biddick struck first with a treble on the opening day of the season at Bishops Court, but 24 hours later and the Shropshire rider took the honors with four victories at Maisemore Park to add to his solitary success in Devon.

Their rivalry continued at Kimble where Biddick was successful on Hawkhurst and Porlock Bay, while Edwards added to his tally on Ahoy Senor in the 4 and 5-year-old Tattersalls Cheltenham sponsored Maiden.

The 5-year-old son of Dylan Thomas had been well fancied on his debut at Didmarton last year before unseating at the third. “I only leant them my money that day” stated winning owner Don Constable after the horse’s success on Sunday afternoon.

Opening up at 5-1 the Wheatland qualified runner was backed into favoritism and that confidence was justified as he was in front from the start and never put a foot wrong.

Fran Nimmo’s runner Hooky Street was moving into contention when he fell at the 11th, while the well fancied Salt of the Earth went two fences later and it was plain sailing for Mel Rowley’s runner after that.

He had a 7-length cushion at the penultimate and spring heeled jumps over the final two obstacles gave his trainer a nap hand in the Tattersalls Maiden series with the Morville handler making in four wins out of four in these types of events. 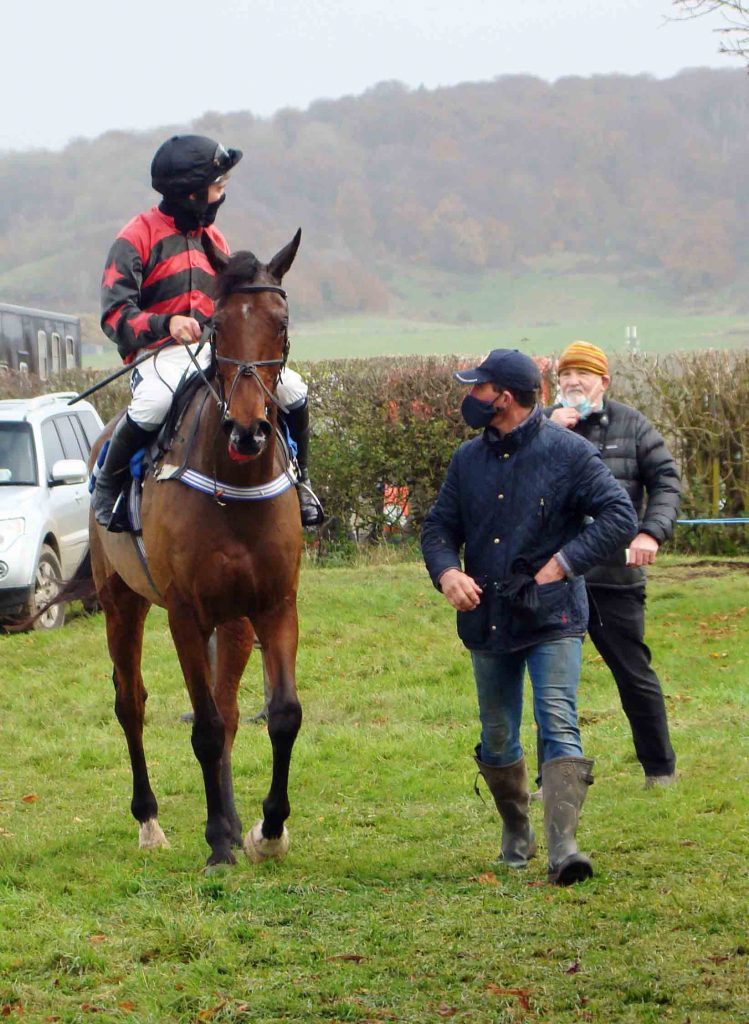 Ahoy Senor, with Phil Rowley and Don Constable in the background

Constable said in the winner’s enclosure later “He is a home bred out of a mare of mine called Dara Supreme who won a Maiden in Ireland but then got a knee injury. He is a half brother to Snuff Box who is with Venetia Williams”

“I am about three winners short of fifty (on the track and Pointing) although it took me twenty years before I had a winner”. 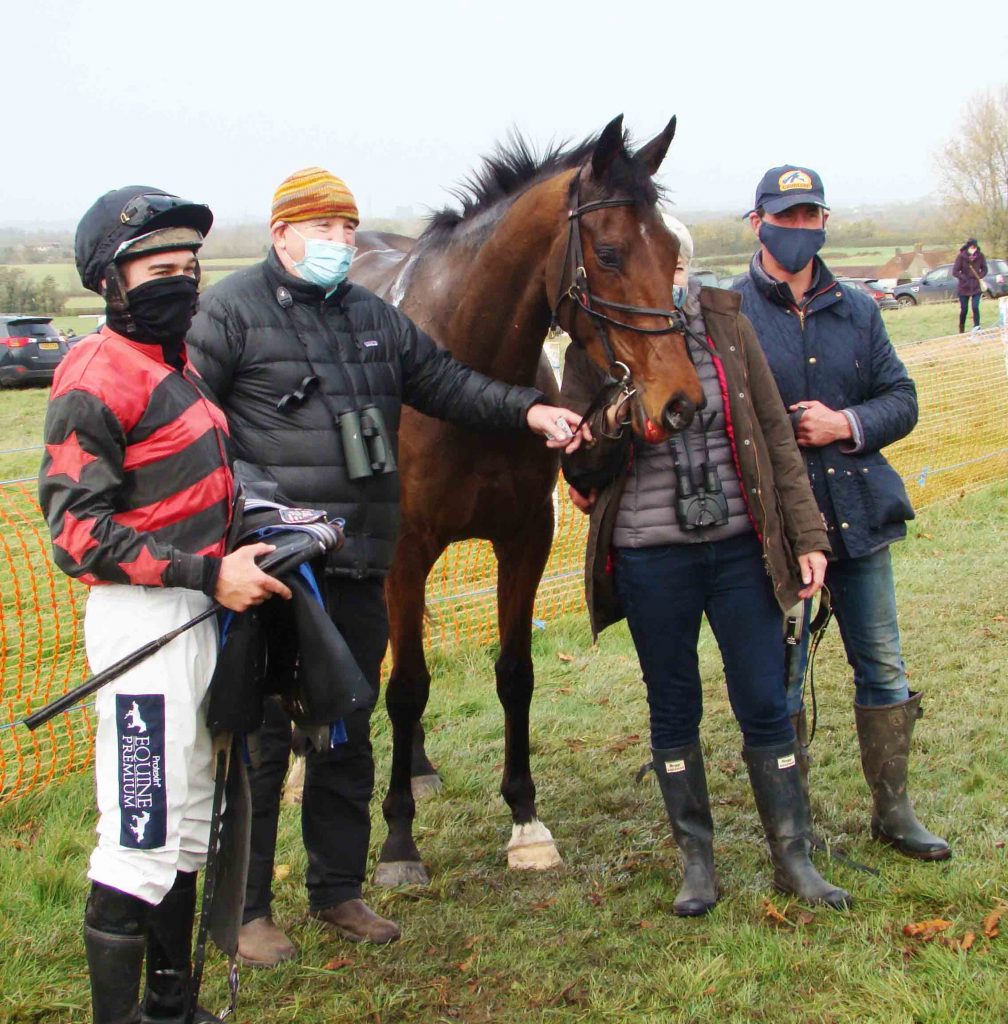 The winning jockey speaking afterwards said “I like him. He was green last year and we were hoping he would go well. He just gallops and does not stop.” That fact was borne out with the winner’s time 3 seconds faster than the Men’s Open with both horses carrying the same weight. 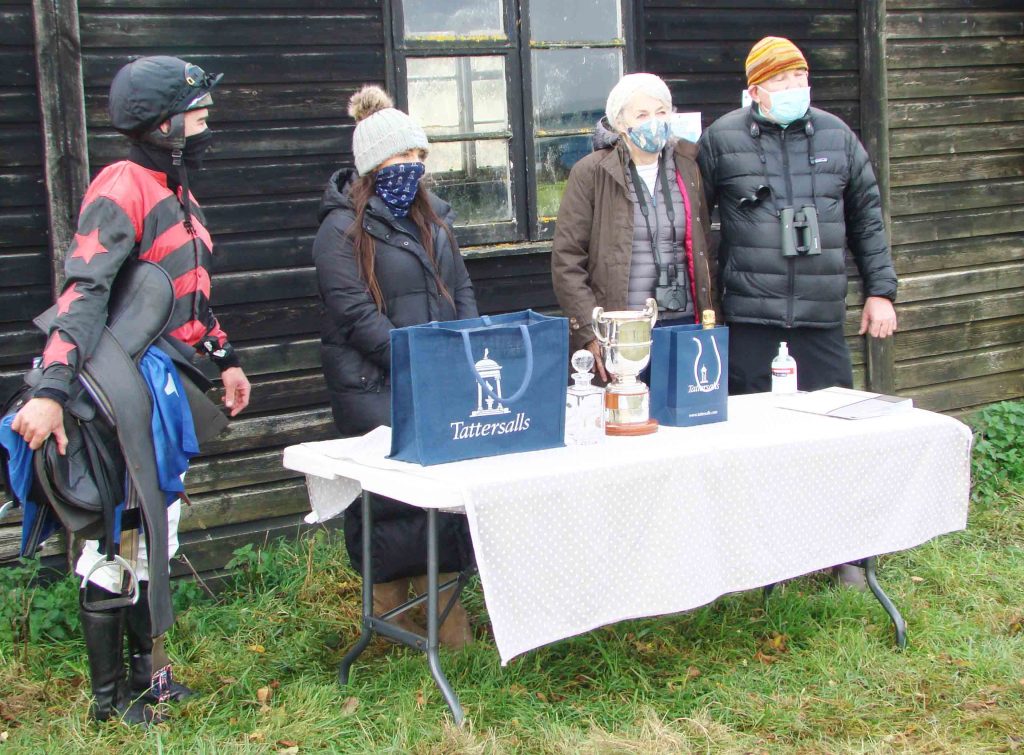 Earlier in the afternoon Rowley and Edwards had to settle for second place with Banana Joe in Division II of the 6-year-old and upwards Maiden.

Joe O’Shea’s Ballymac Boy set a strong pace from the start but was joined by Banana Joe with four to jump and these two had a protracted battle over the next three fences. Ballymac Boy had the inside around the final bend and with Banana Joe fading approaching the last ran out a 2-length winner.

This was the first leg of a double for Cheshire trainer Joe O’Shea who saddled Ravished to get the better of old rival Southfield Theatre in the Skinners sponsored Ladies Open. These two had a rare old tussle before Ravished took command going out on the final circuit.

The Mary Vesty trained Marten was fancied to take the South Midland Conditions and was prominent throughout until a mistake half way down the back straight put paid to his chances which saw a rejuvenated Hawkhurst cruise to victory in the hands of Will Biddick.

Clondaw Westie and Undisputed headed the market for the Mens Open, but the former faded in the last half mile. Biddick then cruised to the front on Porlock Bay, then matched strides with Undisputed down the side of the course before getting the measure of that rival in the home straight.