Anyone who paid for Live Streaming or attended this meeting could not complain about receiving value for money as Tuesday’s Harkaway Club meeting was full of excitement, close finishes and a record equaling feat by Warwickshire based Gina Andrews.

Like some of her predecessors, Andrews has won the Ladies Championship on multiple occasions but with two winners at Chaddesley Corbett she matched Polly Gundry’s record of 303 Point-to-Point winners, the most ever achieved by a lady rider.

The Men’s Title race is beginning to take shape with Bradley Gibbs, Will Biddick and Tommie O’Brien vying for the lead in this year’s Title race and each of them added to their total, while at the other end of the scale Olive Nicholls (the daughter of multiple Leading N.H. Trainer Paul Nicholls) gained her first success just a couple of weeks after her 16th birthday.

Andrews’s achievements must take pride of place however. She had gone close in the first two races on the card, finishing second in the Restricted and occupying the same position in the 4 and 5 year old Maiden, before scoring an all the way victory on Al Shahir in the Veteran Horse Conditions and driving Dubai Quest to a pulsating victory in the Lorna Brooke Memorial Qualifier Ladies Open.

Tango De Juilley, Dubai Quest and Red Indian dominated the market, with the latter most people’s idea of the winner. Tango de Juilley and Flora Guy had galloped a Ffos Las Mixed Open field into submission and set out to achieve the same objective in this race.

They were soon in the box seat, while Dubai Quest sat in the leader’s slipstream, whereas Red Indian was a lot further back, until making a forward move at half way.

Tango de Juilley started to stretch his lead entering the back straight, but tried to walk through the 13th and having lost several lengths as a result of that mistake this left the door open for Dubai Quest and Red Indian who reduced the leaders advantage a few fences later.

These three horses then galloped clear of the field with Andrews’s mount drawing level at the third from home, but just when it seemed Tango de Juilley would pay for his earlier endevours, Miss Guy’s mount showed remarkable battling qualities and soon got back on level terms, while Alice Stevens and Red Indian were struggling to pick up the leaders.

Andrews got down into the drive position at the second from home and settled matters with another prodigious leap at the last and Miss Guy accepted defeat halfway up the run in. 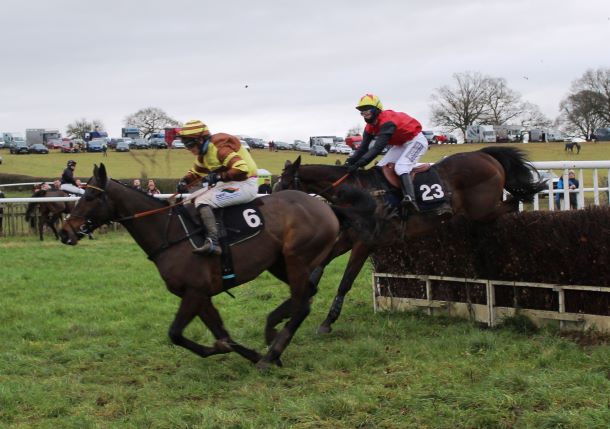 While the winner received the plaudits and was earmarked for a potential engagement at Cheltenham in March, the runner up deserves some credit as he finished two and a half lengths in front of Red Indian.

Questioned afterwards about equalling the record Andrews replied modestly “I am pleased to reach this total and match what Polly did. I watched the seconds previous run and was a bit nervous but was confident when I got on level terms”.

This was the first in the series of races run in memory of Lorna Brooke and she would have been pleased to see a race of this quality dedicated to her memory, with most impartial observers predicting “this was the race of the season”.

Having been treated to an exceptional Ladies Race, it was too much to expect similar fare to be served in the Men’s equivalent, but luckily for racegoers it did, with last year’s Cheltenham Foxhunters winner Porlock Bay putting his reputation on the line against the 2021 Dudley Cup winner Premier Magic.

Bradley Gibbs was content to let Complete Sizing cut out the donkey work and the latter was still in front with half a mile to run but both Porlock Bay and Premier Magic were primed to launch their attack which Biddick and Gibbs did up the final hill.

There was little between the three horses at the 16th, but approaching the final bend Premier Magic and Porlock Bay quickened clear and made their bid for glory with both jockeys firing their horses into the penultimate.

Premier Magic held a narrow advantage approaching the final obstacle but Porlock Bay quickened into the fence and started off up the run in with a slender lead but Gibbs forced his mounts head in front again approaching the line to claim a length victory. 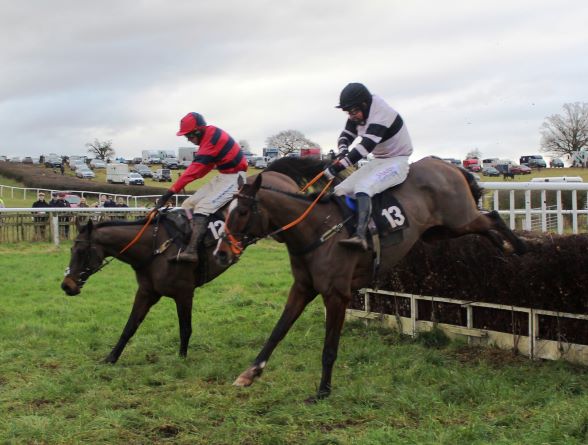 Gibbs indicated later “We knew we were up against it coming here, but Magic has improved so much in recent weeks, so I was not afraid of anything and was feeling confident”.

Earlier in the afternoon Gibbs had instigated the first leg of his double aboard Fier Jaguen in the Restricted, who also carries the colours of Julian Sheriff.

The winner led from flag fall before both Bon Calvados and Latenightfumble made short lived efforts on the climb into the home straight. Gibbs was able to take a dismissive glance round because his rivals could never get the winner out of his comfort zone and the 6-year-old kept up his relentless gallop to prevail by 10-lengths. 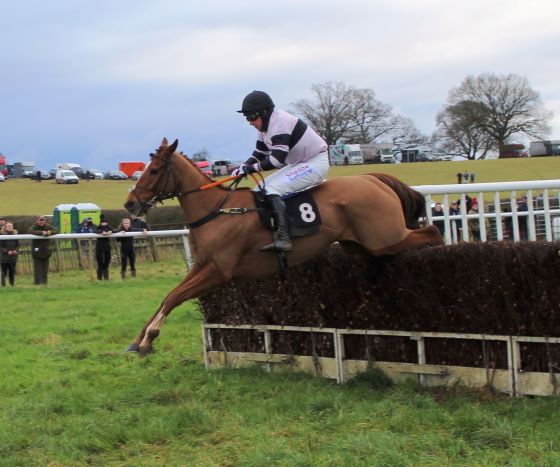 Gibbs explained afterwards “He was sold over the summer but 2 weeks after the sale, the purchasers backed out. He is not the biggest but jumps well so we will keep him going in Points and see where we are at the end of the season”.

Half an hour later and it was the turn of 9-times ex-champion Will Biddick to get his name on the score sheet when Royal Sam saw off his rivals in the 4 and 5 year old Maiden.

After a sedate early gallop Biddick took Royal Sam to the front and after seeing off a succession of challenges settled things with another brilliant jump at the last. Winning trainer Chris Barber said later “he was brought as a 3-year-old and is a big frame of a horse but I expect he will go off to the sales”. 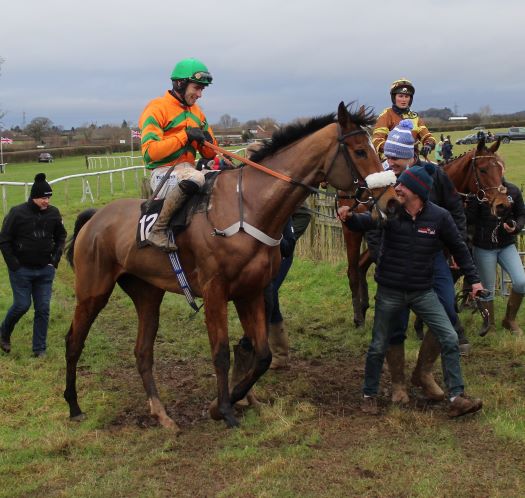 She teamed up with Virak which Nicholls owns in partnership with Worcestershire based Clive Hitchings. After early skirmishes the race became a battle between Dounikos, Virak and Looksnowtlikebrian with Doc Carver a further 12-lengths back in fourth, with that gap widening even further with half a mile to run.

Virak started to edge clear climbing the final hill and had seen off the challenges of Looksnowtlikebrian and Dounikos, but Rebecca Pugh and Doc Carver swept past those two rivals and looked a big danger on the home turn.

Doc Carver momentarily got his head in front between the final two fences, but Virak then showed his class and settled the issue with another quick and efficient jump at the last that allowed his young rider to push her mount clear as they raced towards the judge.

Nicholls explained the Virak was “the ideal schoolmaster” and how the sport has helped his own career progression and “is vital as it provides jockeys and stable staff for the future”, while his daughter described the occasion as “amazing and thrilling” and stated how the horse had “helped her out all the way”. 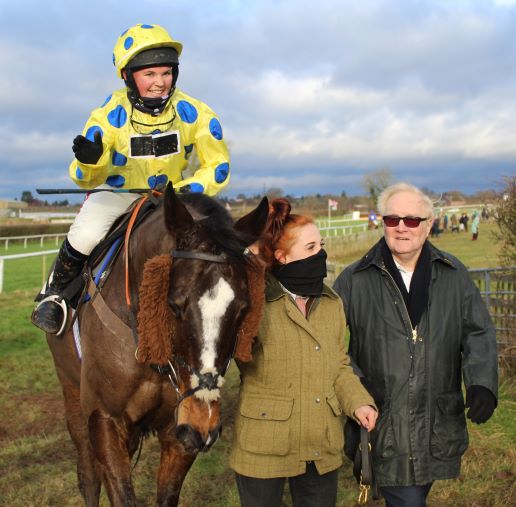 The day’s biggest field lined up for the concluding Maiden, which saw The New Kid start favourite, while local hopes rested with Felicie Du Maquis.

Welsh Rabbit and Westhill were prominent from the start, with The New Kind also holding a prominent position, while Tommie O’Brien had Felicie Du Maquis settled on the leaders’ heels, and that order remained unchanged for most of the race.

Jumping the 15th in the far corner of the course, The New Kid, Westhill and Felicie Du Maquis had pulled clear and O’Brien then asked his mount for a final effort and with The New Kid weakening passing the 3-mile start and Westhill who had jumped impeccably until that point taking a tired fall at the second from home, this enabled Clive Boultbee Brooks runner to extend his advantage up the run in. 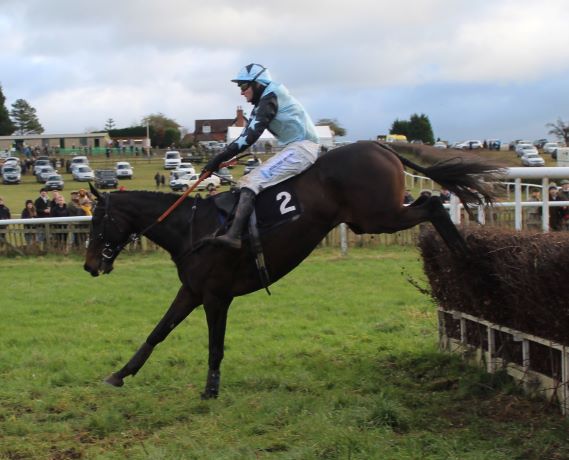 The Herefordshire based owner complemented the jockey “on a lovely ride. She was brought in France but had a couple of years out. Tommie said she is still showing signs of greenness but she has had three races in a short period so we will give her a month off and then decide on future plans”. 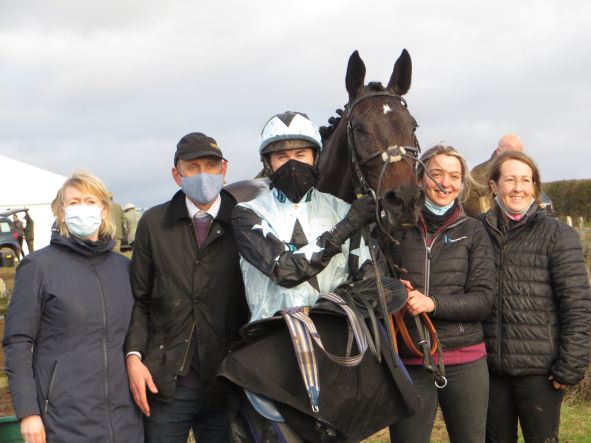 Winning connections pose for the photo’s 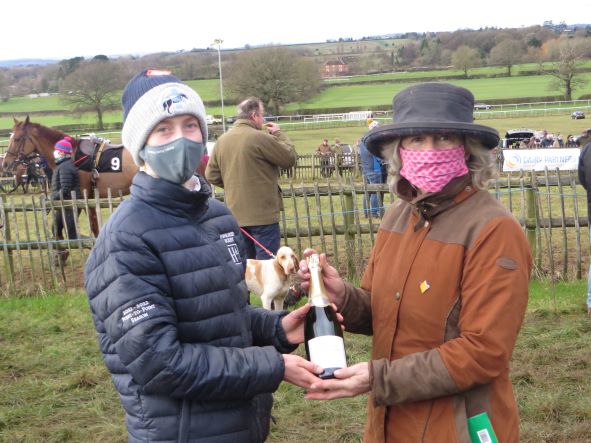 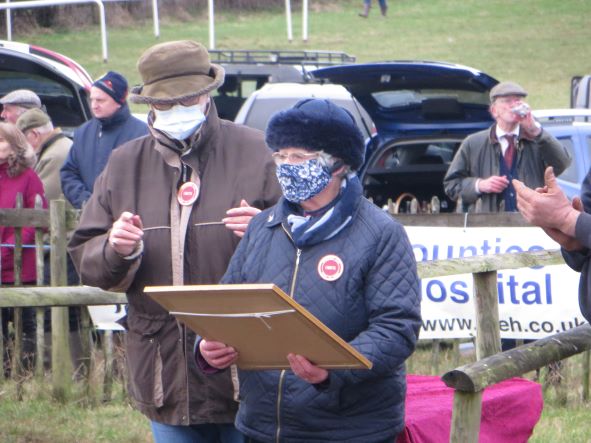 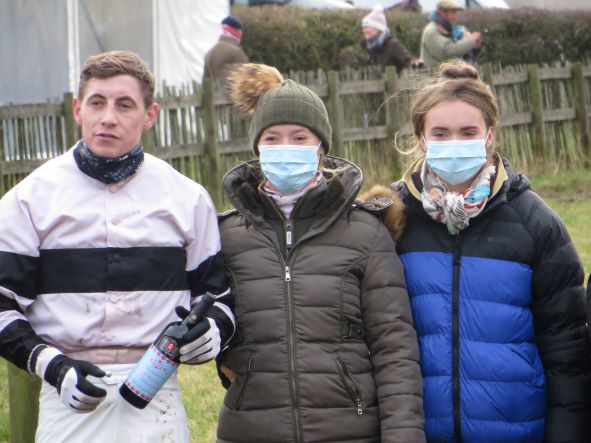