Racing has the capacity to test the patience of all its participants due to its unpredictability as one minute the cards fall in your favour and the next, they don’t.

No matter how hard you try the winners prove elusive, but then for no apparent reason the tide turns and you can’t do anything wrong.

Emma Alvis has been the subject of this phenomenon recently as her Laverton yard struggled for success earlier in the season but since Jeans Lady scored at Paxford on Easter Monday she has sent out four winners from her last five runners.

Big Casino had been one of those successes and he made a quick reappearance in the 4-mile Open for the Crudwell Cup during the Radnor and West Herefordshire Point-to-Point at Cold Harbour on Sunday afternoon.

After harrying Mighty Leader for much of the contest, he began to beat a retreat over the final four fences which led the trainer to reflect “that the race came too soon after last week’s victory”. 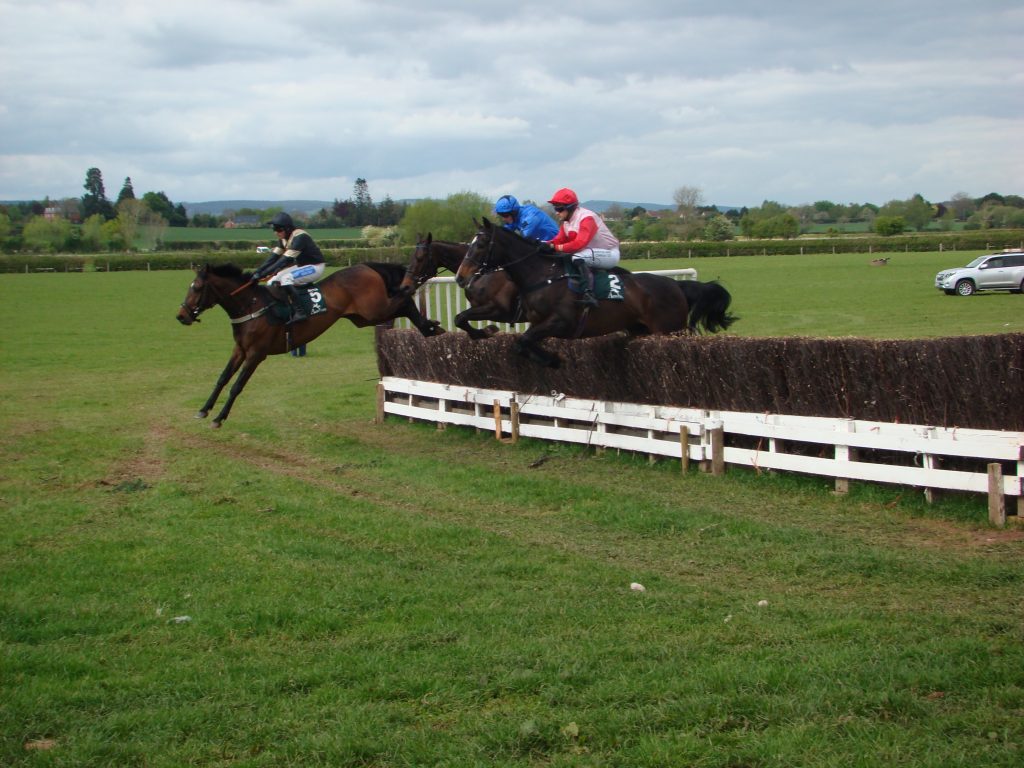 Having won the race on three previous occasions Zac Baker was exuding confidence on Green Winter but the favourite had to be niggled along to stay in touch going out onto the second circuit.

They began to make smooth progress down the back straight but still had work to do as Ballyrath and Huw Edwards applied pressure from the front. The partnership was poised to challenge when a mistake at the second from home halted their progress. 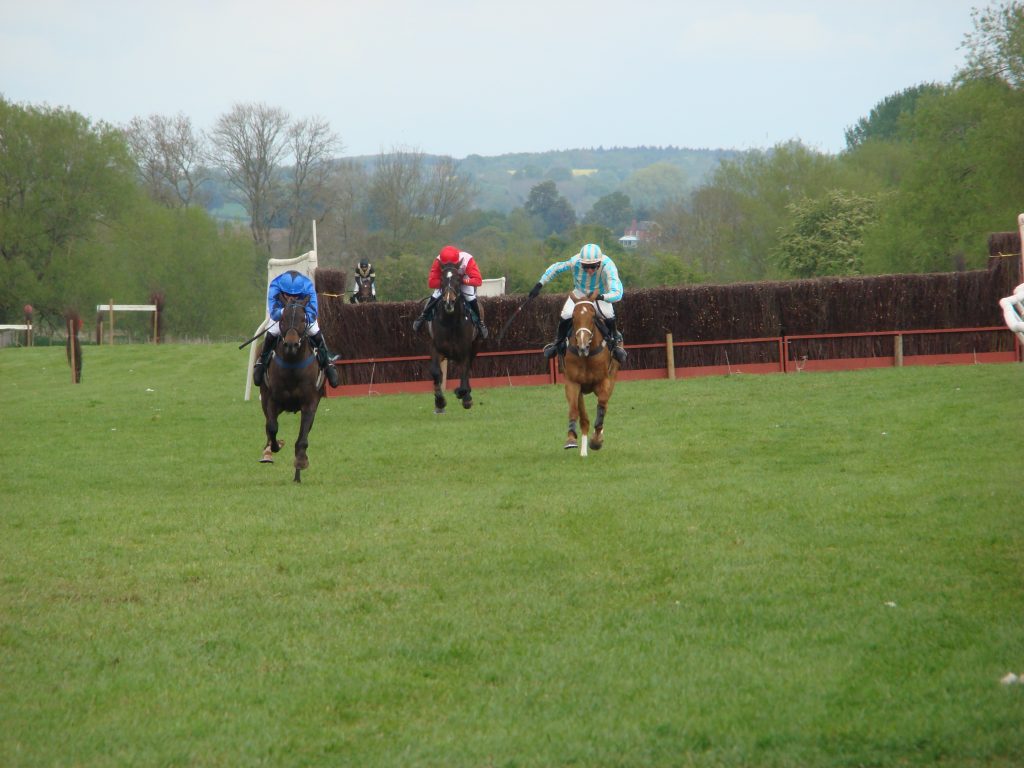 Ballyrath (blue) holds Green Winters challenge on the run in

This cost Green Winter ground at a crucial stage of the contest and he was always struggling to get back into contention from that point which allowed Ballyrath and Hugh Edwards to win by a length and three quarters with Big Casino 15-lengths back in third.

Having been out of luck in the big race Green Winters trainer James Ridley and jockey Zac Baker had the chance of redemption with Draft Pick in the 2-1/2 mile Restricted.

Master Hide and James Jeavons made the running for the first half of the contest, but Draft Pick was always in his shadow and took over pace making duties halfway down the back straight.

Alice Stevens and Castle Cheetah defied their odds as outsiders in the 6 strong field when they moved into a challenging position around the final bend. The favourite was still in command at the penultimate but had no response when Castle Cheetah swept past and surged into a clear lead on the flat. 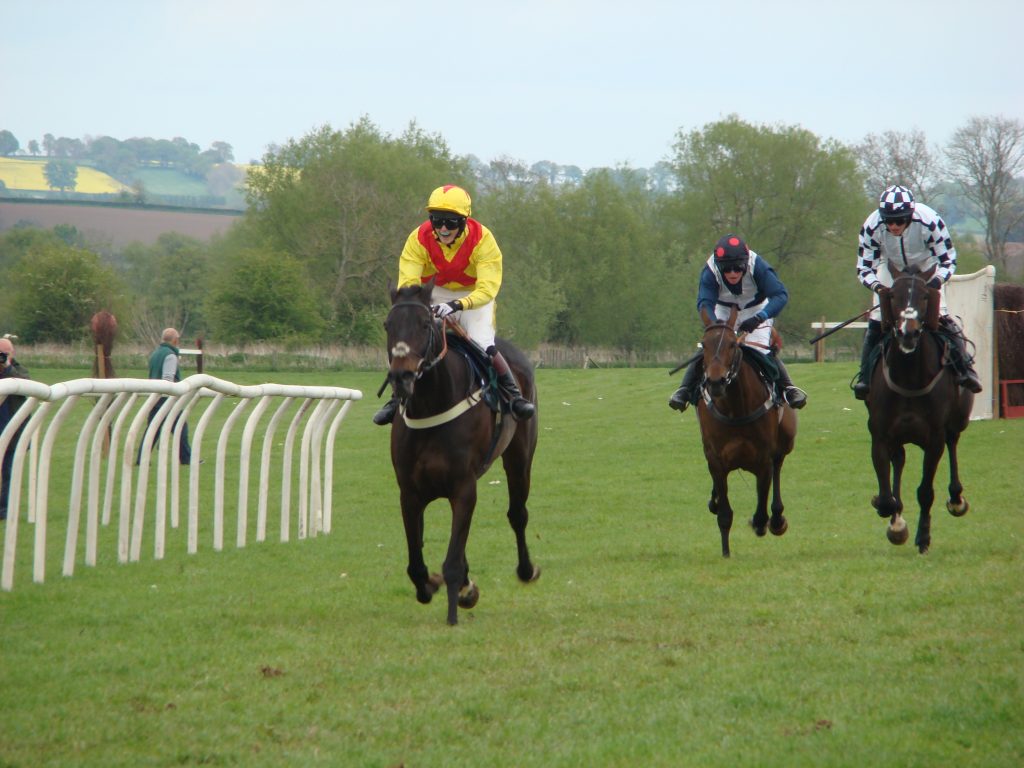 The 11-year-old runs in the colours of the Two Meadows Partnership which includes Alvis and North Cotswold stalwart Mike Rollett, who recalled afterwards that the last time these colours had been carried to victory was back in 1999. 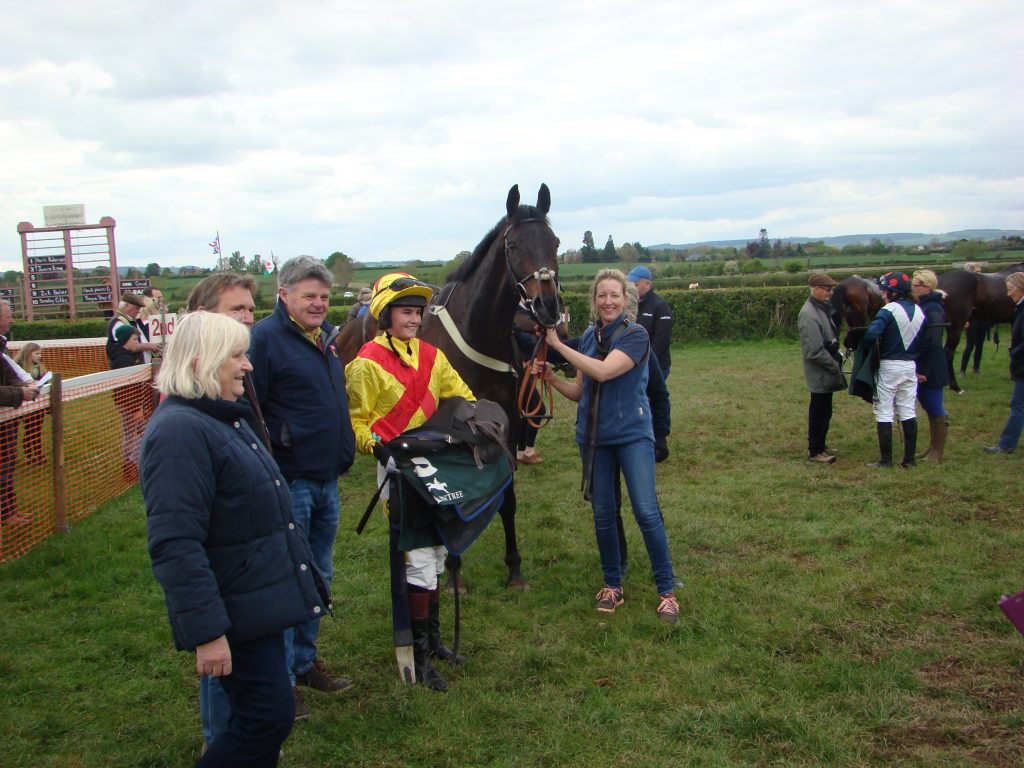 Winning connections in the paddock

Emma’s initial response was “I was not expecting that. He was well at home and I know he jumps and stays and Alice really got him jumping. He broke a blood vessel at Siddington but I thought he might run into a place here”.

All concerned commended Alvis for her hard work with all the horses she has in her care, most of which she rides out at some time during the day. She later explained “The horses had niggling little problems earlier in the season but now everything seems to have fallen into place and they are finding their form”. 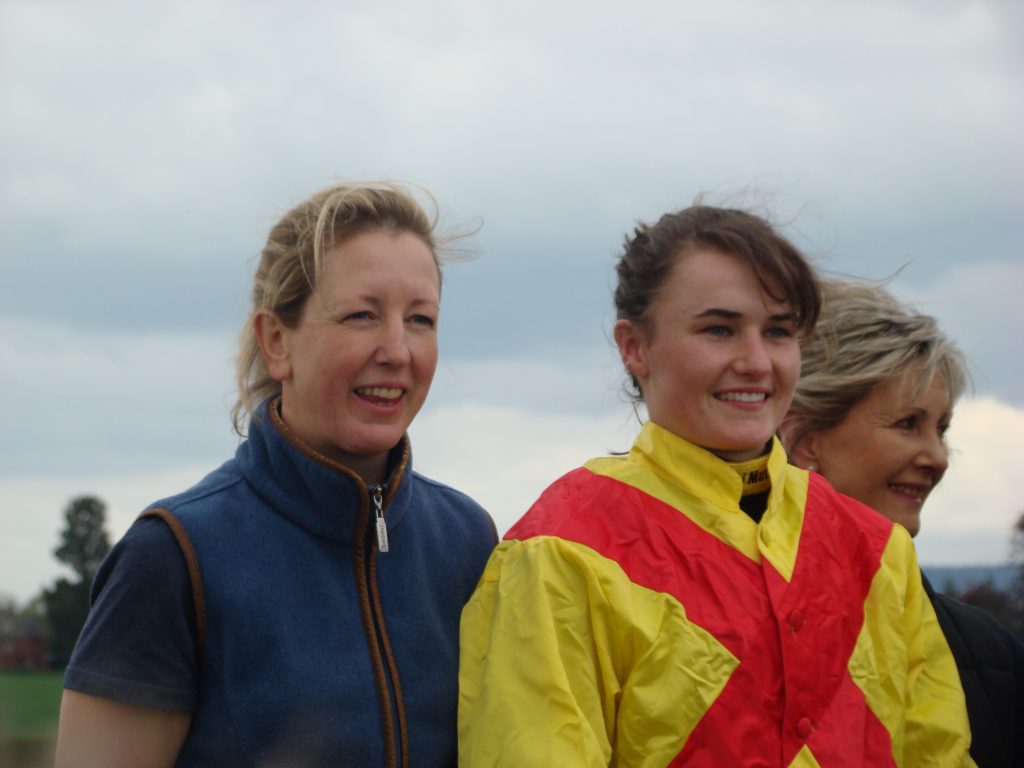 Max Young enjoyed a good start to the season but things have not progressed as expected since then but the show got back on the road following King Willie’s success in the Confined.

Julia Oakey’s 11-year-old was sent to the front from the start and although he was joined on a couple of occasions by at least one of his rivals, he was never passed and his jumping proved far better than the opposition.

Zac Baker and Buffalo Sabre moved into a challenging position racing through the poplars but that effort proved short lived and it was left to Phine Banks mount Thoonavola to throw down a big challenge over the final two fences. 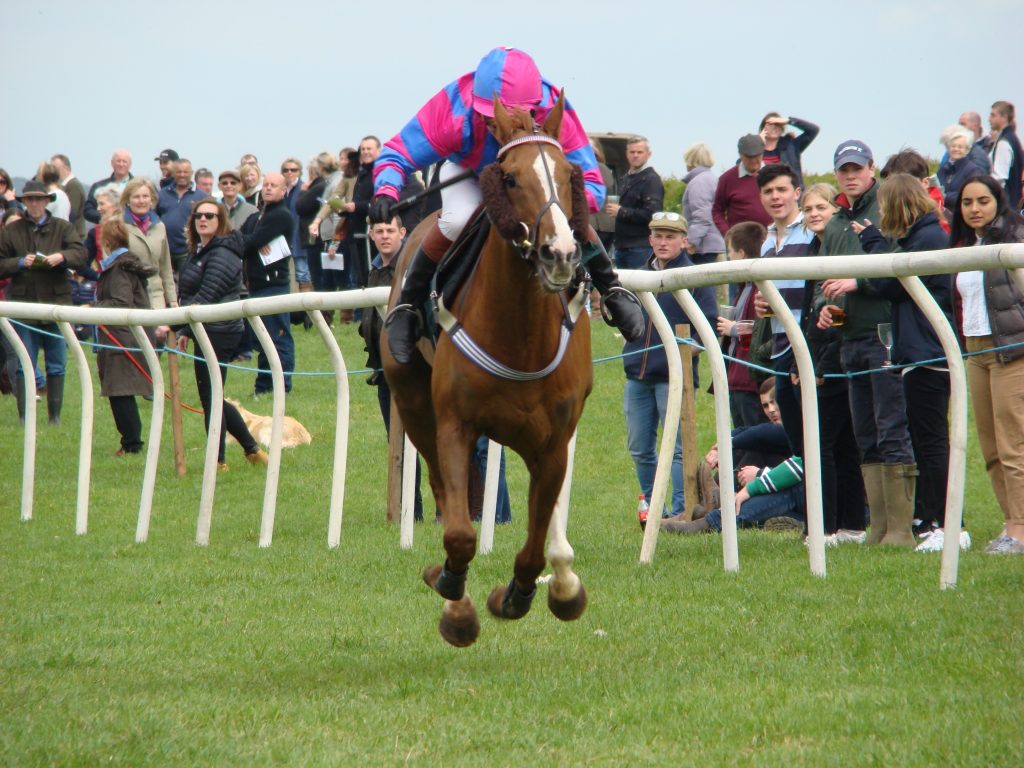 King Willie and Lorna Brooke storm home in the Confined

The latter ran his best race for a long time and finished so strongly that he got to within three quarters of a length of the winner at the post, but unfortunately collapsed 50 yards after the line – a sad loss to his sporting connections.

The winning trainer later commented “He seem to enjoy being out in front and was very sharp at his fences”.

That victory provided the second leg of a double for Lorna Brooke which had been initiated earlier in the afternoon when her mother’s River Purple had made all the running in the two runner Members.

Rendcomb trainer Max Comley has made a big impression in a short time and one of his horses came close to causing a major surprise in the Ladies Open.

Cloudy Joker had been off the course for almost three years and started the outsider of the party, while 3 times winner Cheltenam de Vaige came in for heavy support.

Hannah Lewis’s mount looked the probable winner as they moved up smoothly along the back straight, while Midnight King was still in contention when falling at the third from home. 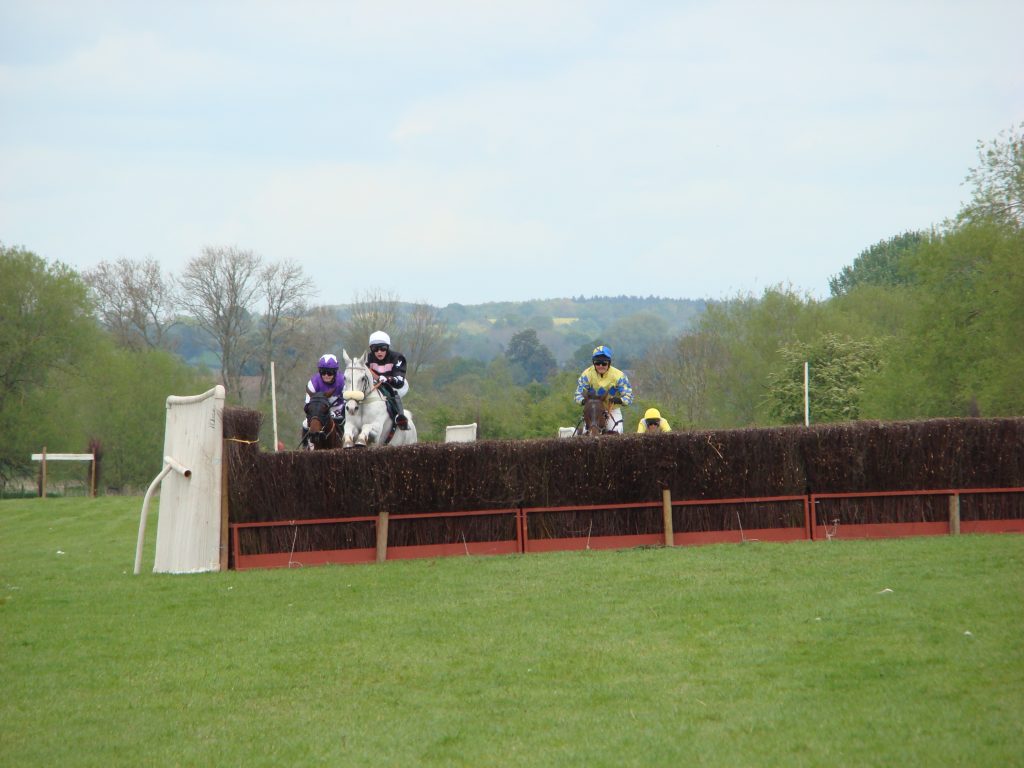 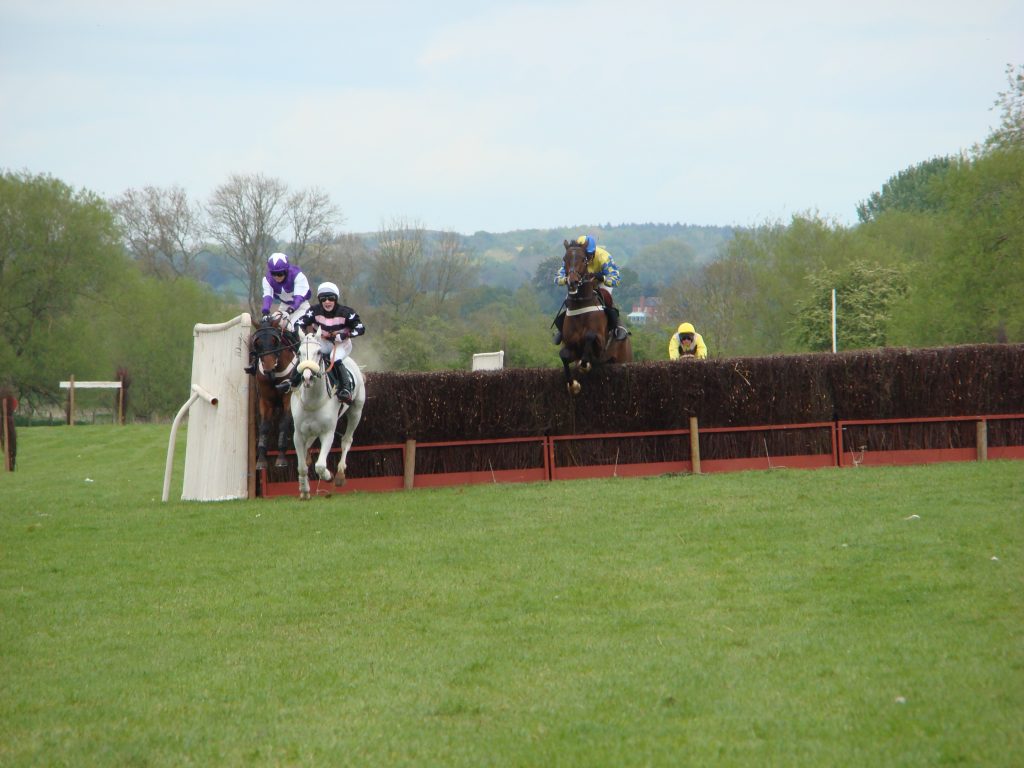 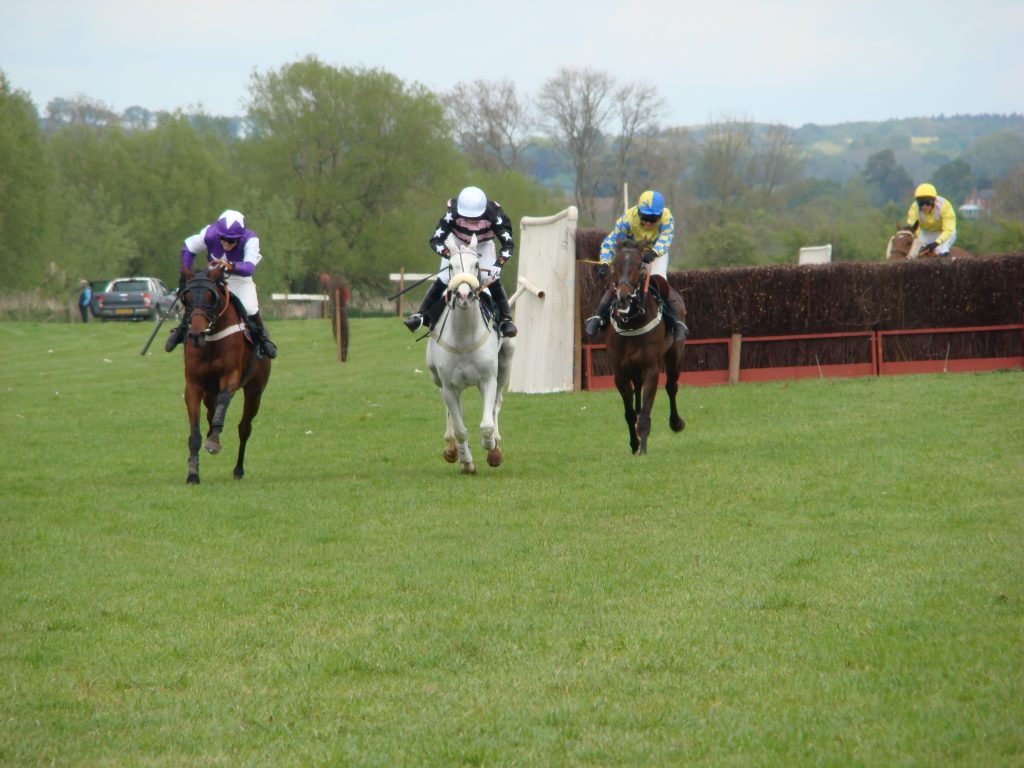 Cloudy Joker (grey) just fails to last home in the Ladies. The winner Chu Chu Percy is on the left

Cloudy Joker straightened up for the judge with a useful advantage but his long absence began to tell as he jumped right over the final two fences and was unable to withstand the strong late thrust by Alice Stevens on Chu Chu Percy.

Phil Rowley introduced racecourse debutant My Bobby Dazzler in the 3-mile Maiden, but he proved no match for the Welsh Raider Beni Light who had finished behind Fran Nimmo’s Switch Hitter at Maisemore.

That horse was subsequently sold for a huge sum at Tattersalls Cheltenham Sales and Beni Light advertised that horses’ credentials with a pillar to post victory. 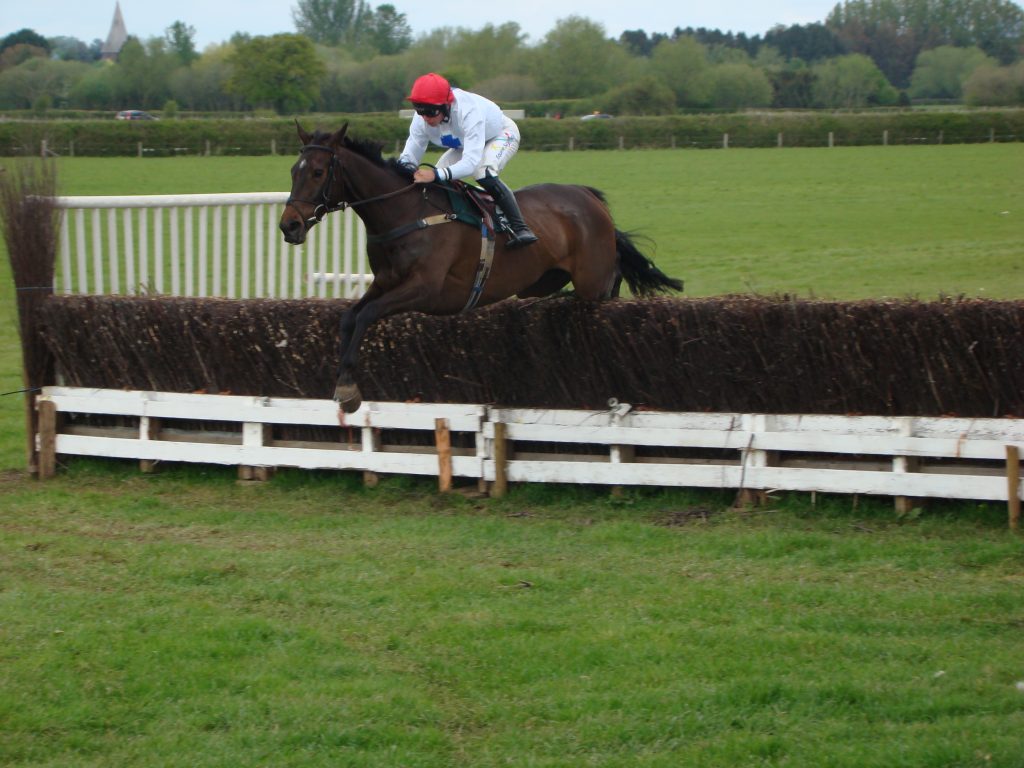 Ben Jones’s mount was 10-lengths clear of their rivals after the first and then went further and further clear. They passed the line before the two remaining runners had negotiated the third from home, but My Bobby Dazzler had a good educational run and there will be better to come in the future.

Bradley Gibbs teamed up with Thomas Crown to take the 2-1/2 Mile Maiden. Tom Faulkner’s 5-year-old assumed command as the runners emerged from the poplar trees, and although they were pushed all the way up the home straight by Calvins Gal, they were able to keep that rival at bay over the final two fences.

Pantxoa who had been distracted and refused in the North Cotswold Members regained the winning thread in the Novice Riders race at the Leicestershire course.

Jacob Pritchard Webb’s mount likes to race up with the pace and was given an enterprising ride by his young jockey who had sufficient reserves to see off the challenge of the favourite Minella Friend to prevail by a neck.

Martin and Jane Wanless train a majority of their horses but You Know the Story is the exception and is currently based with Tom and Gina Ellis. False Getaway began to weaken on the home turn and the Wanless’s youngster came through to pick up the pieces in the closing stages.

The Jack Wallace trained and Worcestershire qualified Charles Brown had fallen two out when looking as though they would open his account at Thorpe Lodge in April.

The 6-year-old had failed to compete in four previous outings so was nursed round for a majority of this contest but began to make up ground after the third from home, then came through to lead off the home turn and went on to score easily.

Local representation was thin on the ground for Mondays meeting but Jason Warner and Byron Moorcroft combined to take the Banwen Restricted at Llwyn Ddu with French Piece who was sent off the even money favourite.

Max Young had a busy but winning weekend, with Aero Majestic who had led for such a long way in the Restricted at Knightwick 7 days previously captured a similar event during the Cattistock meeting at Littlewindsor.