To use a boxing analogy the main contenders in this year’s Jockeys Championship are evenly matched and as one lands a blow, another matches their efforts so it is difficult to predict who will come out on top and deliver the knockout during the final weeks of the season.

Bradley Gibbs took his weekend total to three following a breath-taking performance on the Ryan Potter owned and Emma Yardley trained Don Bearsy in the Mixed Open at Kingston Blount on Sunday afternoon.

Only the starter knows why he did not release the runners at the first time of asking. We all know there they have to strike a balance between the perfect start and doing the best for each runner and he should have been aware of Don Bears’ histrionics in the past.

The problem was compounded when the runners were recalled for a second time, and when the starter eventually let them go, the inevitable happened. The Ledbury qualified gelding had to be cajoled along by his rider which meant the opposition had a 15-length advantage passing the judge for the first time.

Trailing the runners as they climbed Kingston Knoll for the first time, Bradley Gibbs mount strolled up to the opposition down the back straight to move into third passing the start. The partnership continued their forward momentum and had actually taken the lead as they went out onto their final circuit.

The opposition did not appear to be unduly worried and given his previous exertions were probably expecting the leader to come back to the field, but having established a 5-length advantage at the top of the hill, Bradley Gibbs set sail for home and soon had their rivals in trouble.

As they appeared back in view Vivaldi Collonges had moved into second place but his challenge was quickly brushed aside as Don Bearsy kept up a relentless gallop. He turned into the home straight with the race at his mercy to score what 6 minutes earlier had been an unlikely success.

Gibbs public comments about the start were printable, while his private ones were not, but he was full of compliments for the horse’s connections “Ryan said to me, if he starts, he wins and he was right. The horse does a bit of everything at home to keep him sweet and he must be the best open horse in the country based on this performance”. 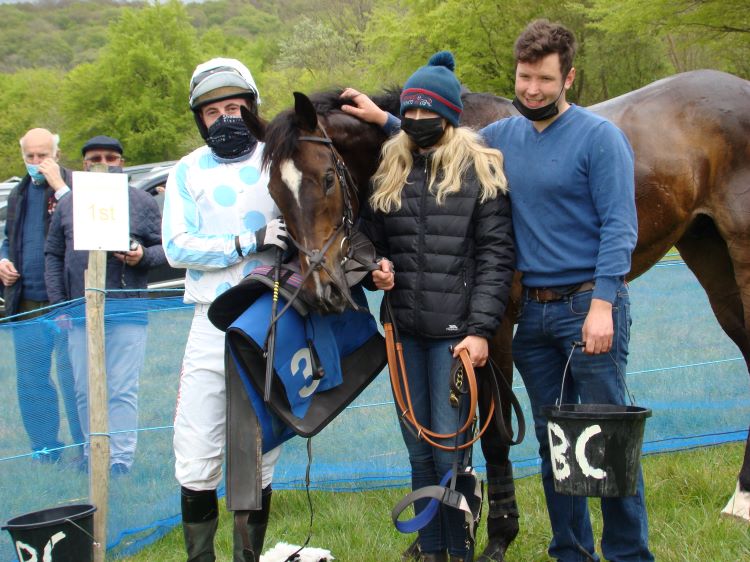 Gibbs, Yardley and Potter with their winner

Asked if he thought about pulling up after losing so much ground at the start, Gibbs remarked “No – once he jumped the second, he grabbed hold of the bridle, pricked his ears and went. Once he gets going it’s a job to hold him. He’s unbelievable”.

An apple a day might kept the doctor away, but a winner definitely keeps the challengers away and James King did just that by taking the opening race on the card, Division I of the Maiden with Night Duty.

The Fran Nimmo trained 5-year-old was vying for favouritism with Alan Hill’s newcomer Quick Sharpener, but the formers connections obviously had no reservations about making the running and the winner gradually extended his advantage over the opposition down the back straight and turned back towards home with an unassailable lead. 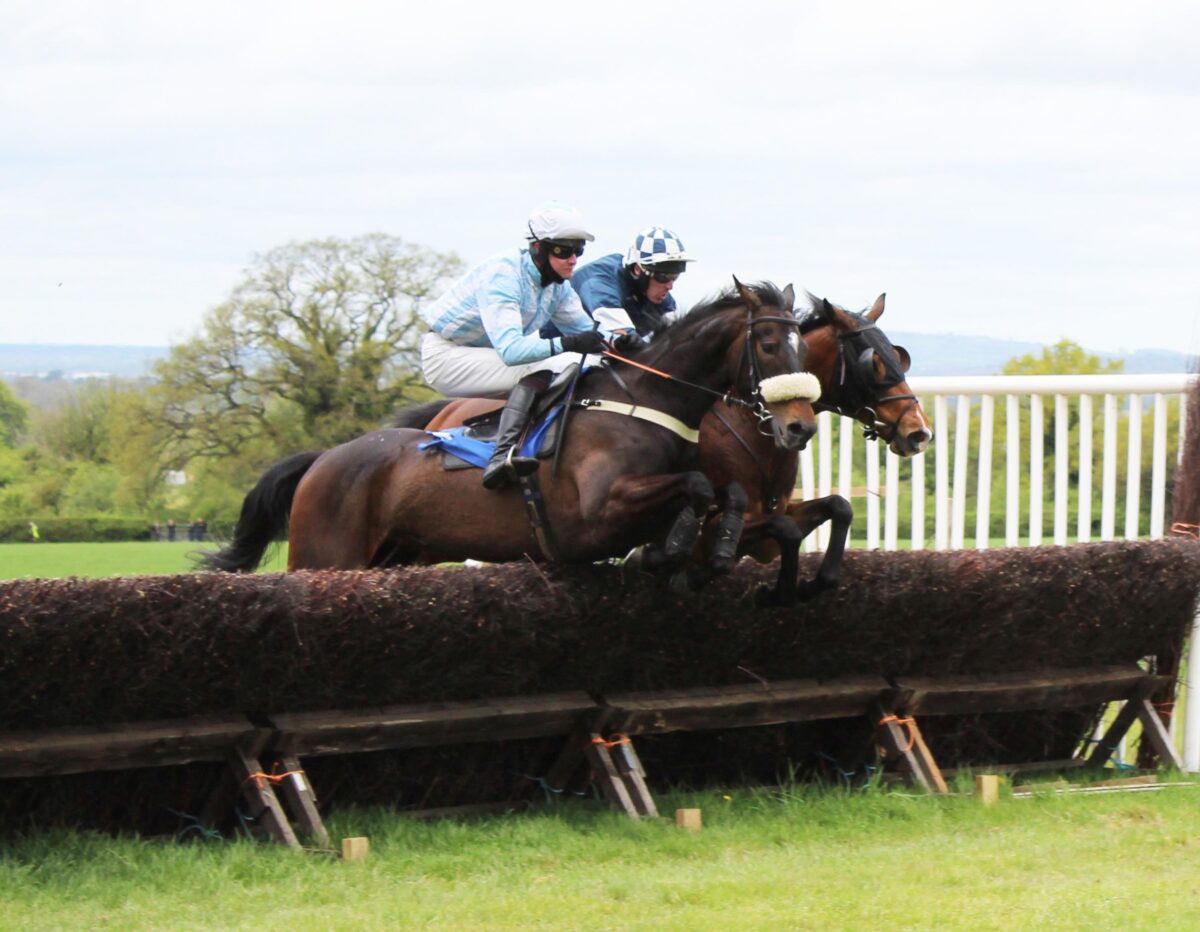 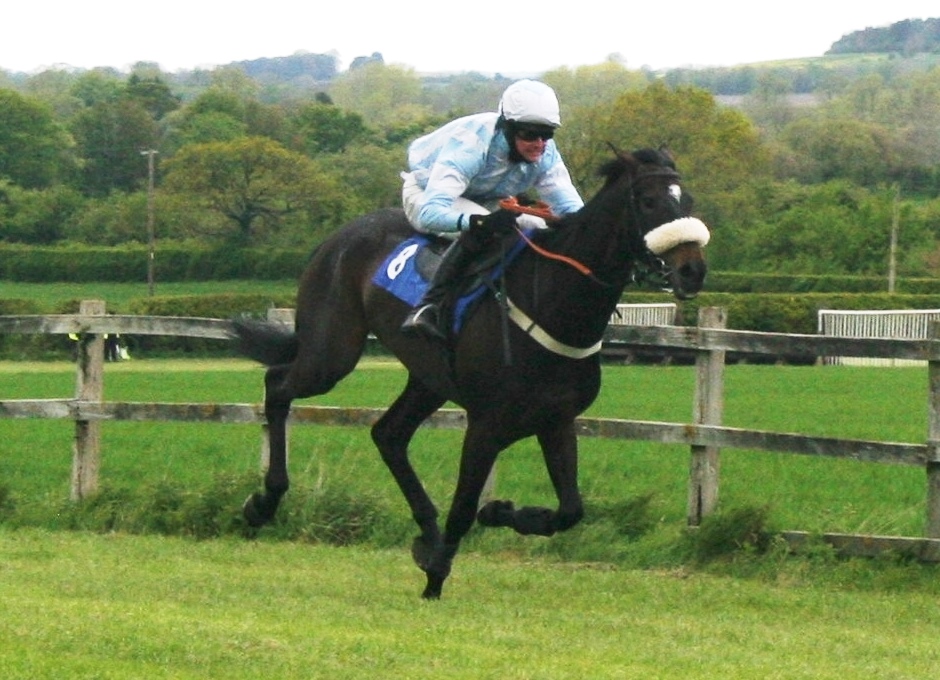 The trainers husband Charlie stated later “He was very professional and came to us from Ireland about 5 weeks ago. That race was lovely to watch and you could not ask any more from a horse having his first outing. It was good display and its off to the sales now”.

Tommie O’Brien suffered a new miss in Division II of the Maiden riding the Alan Hill trained Le Grand Fromage. The partnership performed with credit but could not cope with Dale Peters’s mount Mountain Assault in the closing stages.

35 minutes later and the Hannah Lewis trained Gragreelagh Girl gave a good account of herself in the Conditions. Victoria Sollitt delivered her challenge down the back straight and one was of a host of horses in with a chance down approaching the penultimate. Gragreelagh Girl actually held the lead briefly just after that obstacle but dropped back quickly and eventually finished fourth.

Will Biddick managed to keep in touch with his Championship rivals with a solitary success on Hermes due Gouet in an Upcott Cross Maiden, which means that James King starts the new week three clear of Bradley Gibbs in the race for the Title.

King, Biddick and Gibbs had all been in action at the previous days Minehead Harriers and West Somerset Vale fixture at a rainy Holnicote.

King’s solitary winner was provided by the Mikey Bowen trained More Bucks in the Mixed Open and more importantly they did so at the expense of Biddick and Gibbs.

The West Midland based jockey showed his all-round ability with a masterly display of dictating a race from the front. Leading from flag fall, More Bucks set a steady pace, but King was able to extend his lead entering the home straight with a circuit to run. 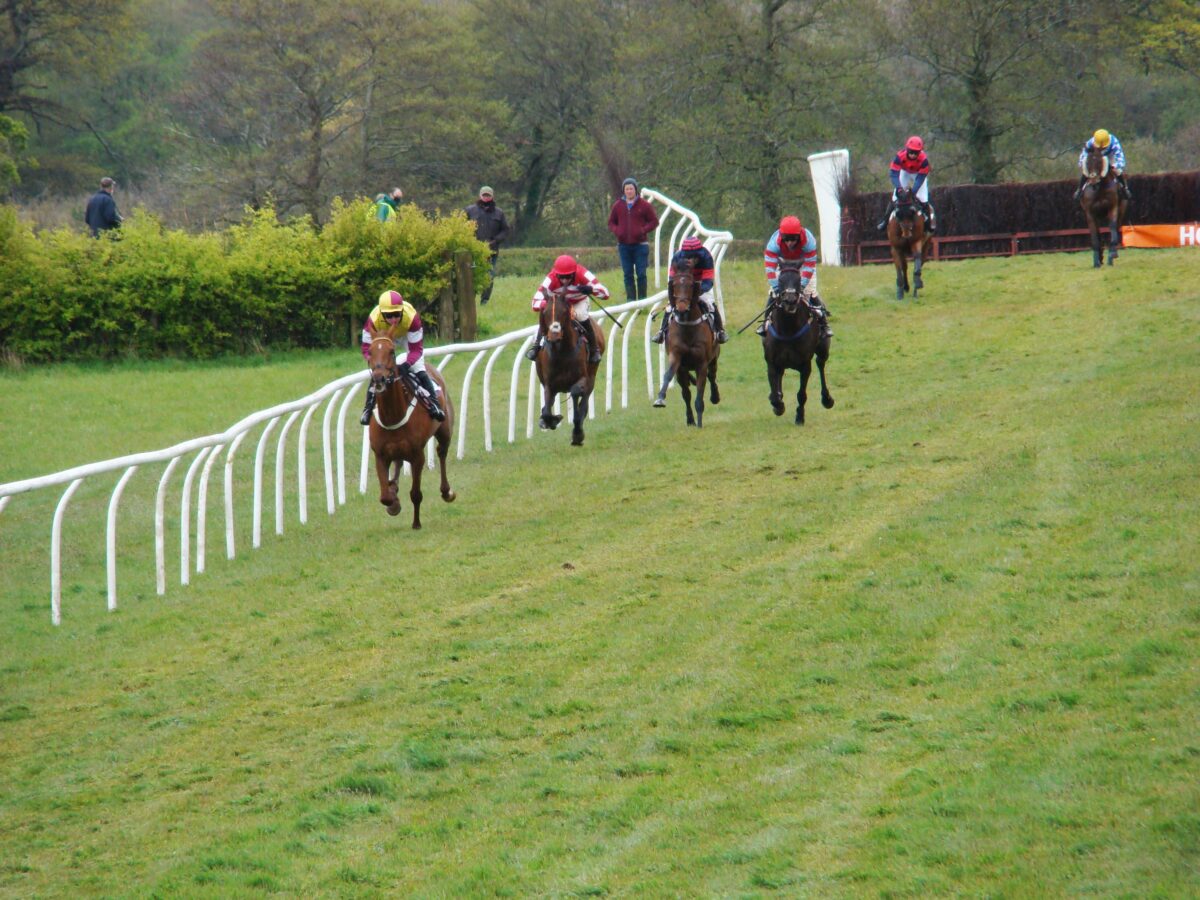 They held a 10-length advantage at this point but both Biddick and Gibbs sent their mounts in pursuit of their rival down the back straight. Their efforts to do so resulted in Los Alamos’s effort petering out with four to jump and he was pulled up two fences later.

Gibbs and Yeats Ace tried their best in the final mile but More Bucks kept finding extra and was revelling in the soft conditions and cantered home for an easy success. 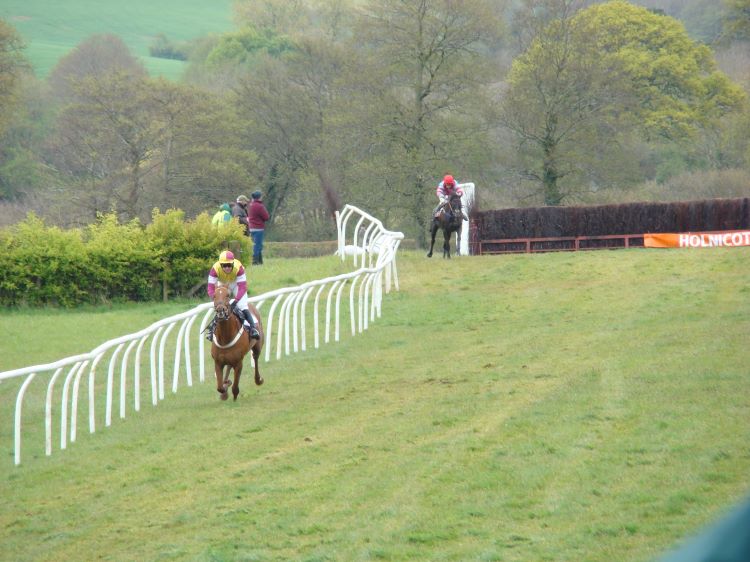 More Bucks saunters up the run in to land the spoils

Earlier in the afternoon, Gibbs attempt at an all the way success on Boss Baby in the Maiden were thwarted by George Hiscock on Forty Acres, who caught them at the final obstacle and clung on grimly to their one length advantage up the long run in.

Gibbs took his score to the season for 14 courtesy of a double for David Brace, taking the 8-runner Conditions with a facile win under Robin des People, while that horse’s stablemate Gatts and Co had a protracted battle with Russian Invasion before asserting in the home straight.

James King and the Mikey Bowen trained Staple Head had featured prominently in this race until carried out by a loose horse at halfway otherwise the result may have been different.

King rode Jason Warner’s odds-on favourite Ahead of the Game in the Intermediate. Settled at the back of the field King moved his mount into a challenging position as they came back towards home. The held every chance at the second from home but the rain softened ground took its toll and Will Bidisk pulled one back on his rival after claiming victory on Rein de Tout.

Cothelstone on Wednesday evening provides the next instalment in this intriguing battle.

Oliver Greenall, who was Britain’s men’s champion in 2007/08, is already well established as [..]
More info

What price a West Mercian Flat champion at the end of the year?

The West Midlands isn’t usually known for its flat racing pedigree. If you’re from [..]
More info