This fixture which is set in the heart of rural Herefordshire, is a favourite with the sports aficionados who enjoy its relaxed atmosphere and beautiful surroundings, however these smaller fixtures face problems when their pool of volunteers diminishes and it was acknowledged that local N.H. Trainer Katy Price had been crucial in keeping this particular “show on the road” and her endeavours were rewarded with plenty of runners and a good crowd for the Golden Valley meeting at The Weston, Bredwardine on Saturday afternoon.

Meetings and courses in the old Welsh Border Area have been decimated over the past decade, with the loss of South Hereford and Ross Harriers (Garnons), Radnor and West Herefordshire (Cold Harbour), North Hereford (Whitwick Manor) and the Teme Valley (Brampton Bryan). 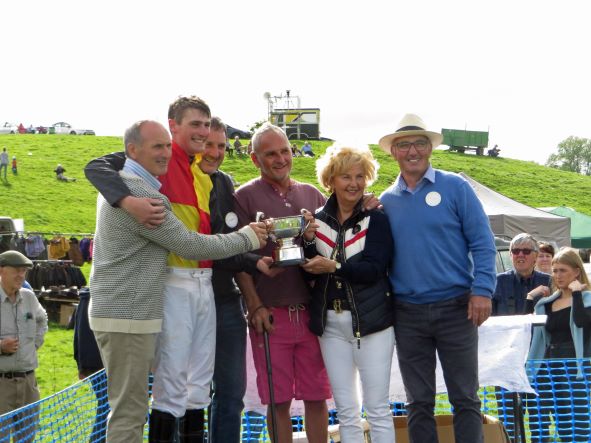 They had been happy hunting grounds for so many star performers back in the 1970’s and 80’s and we had a reminder of that when the Bryan Family, sponsored the Bill Bryan Memorial Maiden
(Please see the attached article regarding the families exploits which was published in 1978).

This race went to Charlie Willes Gamalou D’Alene. The 6-year-old was trained by his boss Nigel Twiston-Davies earlier in his career but joined Willes in the Pointing ranks following a 353-day absence from the racecourse.

After a promising run behind Flying Colum at Maisemore he was pulled up at Woodford, but with Boss Baby for company they took this race by the scruff of the neck and set a pace which the opposition struggled to contend with. 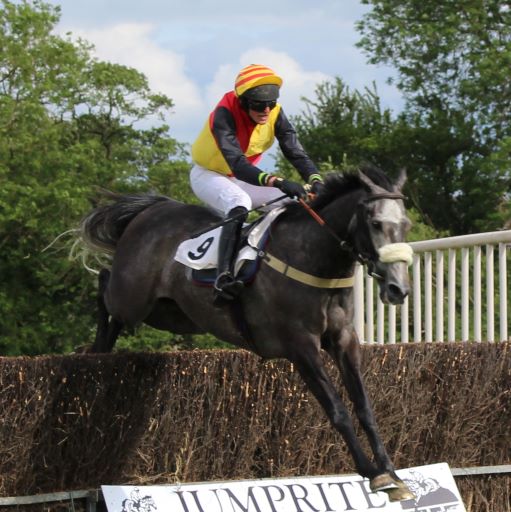 The two leaders extended their advantage around the final bend, and neither Barley Hill or the favourite Blackfyre (James King) were able to get on terms in the home straight, which allowed Gamalou D’Alene to claim a length victory. 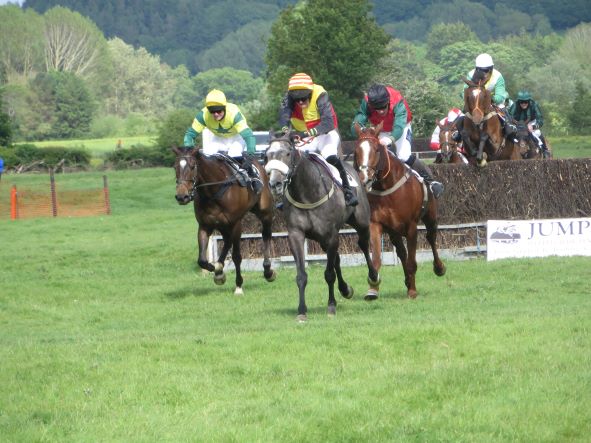 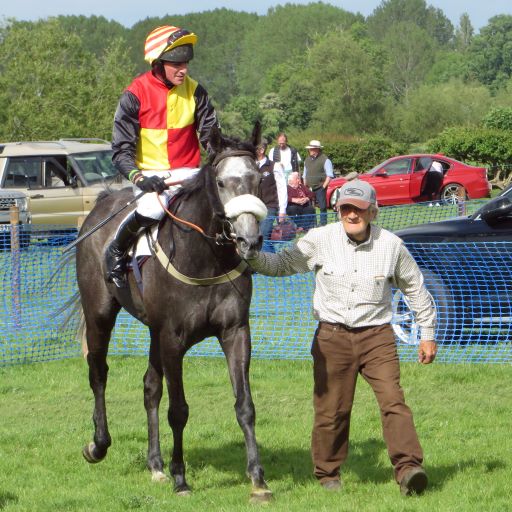 The grey starts off up the run in being chased by Blackfyre (yellow and green), Barley Hill (red and green)
Successful trainer Charlie Willes leads in his winner

West Mercian based owners, trainers and jockeys took the bulk of the prizes with James King riding a double which enhanced his prospects of taking the National Title for a second successive year as he drew level with Will Biddick at the top of the Riders Championship.

Zac Baker matched Kings efforts and the West Mercian Area is lucky to have two such talented riders in its Jockey pool. Zac Baker’s performance on Cashmoll in the Conditions deserved an award for “the ride of the day” with the jockey refusing to accept defeat and having such a willing partner who mugged the long-time leader Coquin Mans in the shadows of the post. Baker completed his double when Gamalou D’Alene landed the Maiden later in the afternoon.

A double-digit field lined up for the Conditions but Bobby Thomas and Coquin Mans were keen to take the prize back to the principality and nearly succeeded in doing so.

Dominating from the start, this partnership quickened the pace at the 12th and Cashmoll was the only one capable of matching his efforts as more fancied rivals dropped by the wayside. 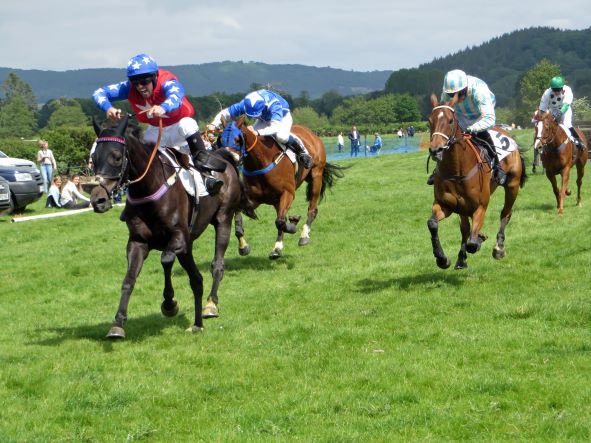 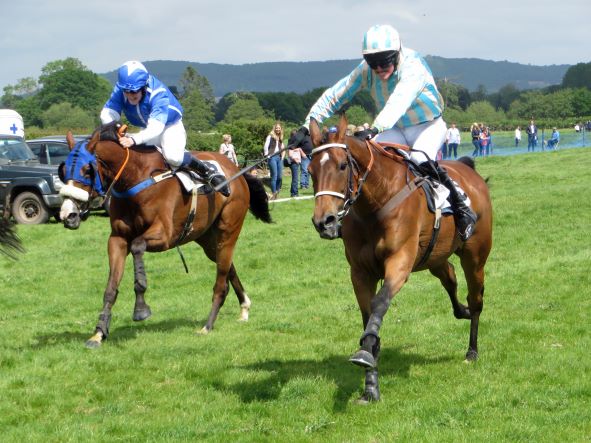 Turning back towards the finish nothing came out of the chasing pack and Bobby Thomas’s mount started off up the run in with Cashmoll still snapping at his heels but the leaders stride began to falter and Baker seized the opportunity with both hands steering his mount between his rival and the running rail to claim the prize for owner Sarah Oliver and trainer James Ridley.

The winning team saddled Green Winter in the Men’s Open, but Phil Rowley’s Valtor started favourite but still had plenty to do when he was pulled up with a leg injury at the 15th.

Charlie Dando had sent Calett Mad into the lead heading out onto the final circuit but they were joined by Gottagottagetaway halfway down the back straight. With Green Winter losing his place and Valtor pulling up these two horses had the race to themselves over the final two fences. 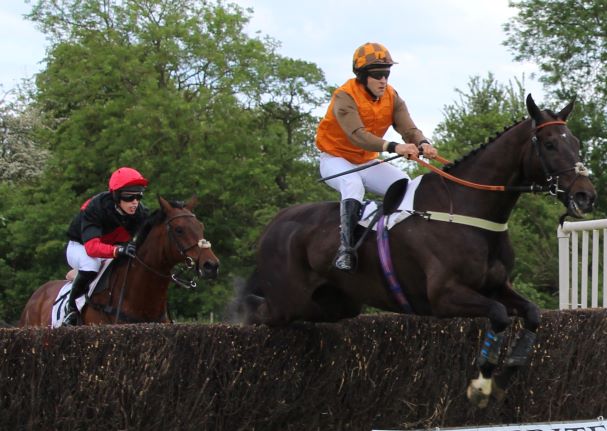 Charlie Dando and Calett Mad lead Gottagottagetaway at the last

Calett Mad started off up the run in with Gottagottagetaway only able to stay on at one pace, while Green Winter’s stamina kicked in and that saw him claim third place but Dando’s mount hung on grimly to provide the jockey with his first victory of the season. 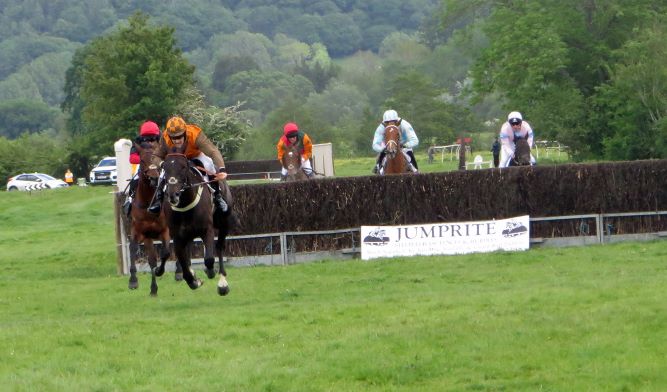 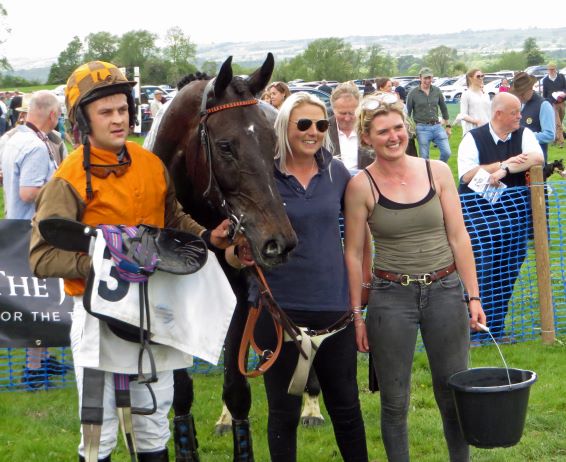 Badminton based Dando is a farrier by trade, but next year he fulfils a long-held ambition by becoming Master and Huntsman of the Monmouthshire.

He explained later “I got him from Nigel Twiston-Davies but our horses have not been right this year although he did show signs of a return to form at Eyton recently. I was considering retiring but I may have a rethink after this. This is all down to Brooke (Gardener-Wallen) she does all the hard work and deserves all the credit”.

James King settled Villanesque behind the other runners while Tommie O’Brien “set the pace” on Bellamy Express who jumped to his right throughout, losing lengths at every fence as a consequence of doing so.

After the steady early pace King sent his mount into the lead on the last bend and they already had the race in safekeeping when Gotadance fell at the 17th when disputing the runners up berth with Bellamy Express. The winner had finished third in an Irish Maiden at the beginning of April before being purchased by his new connections. 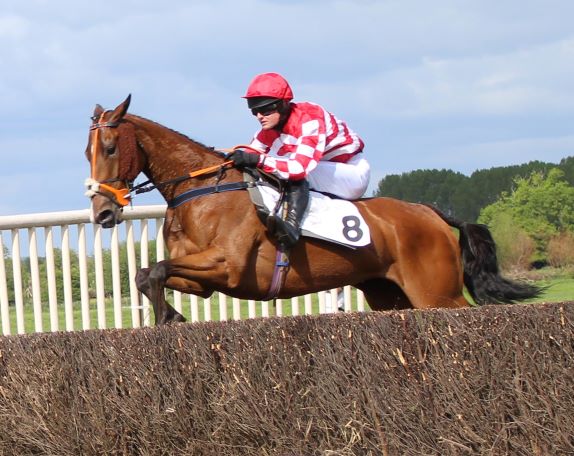 King had his mount anchored at the back of the field before making smooth progress when the pace quickened down the back straight. Bury Wells and Fusee de Poche battled it out between the final two obstacles but Kings joined the leader bypassing the last and quickened into a race winning lead half way up the run in and looks a useful prospect. 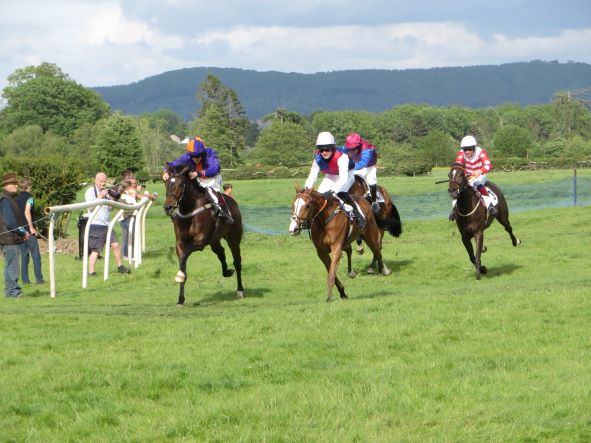 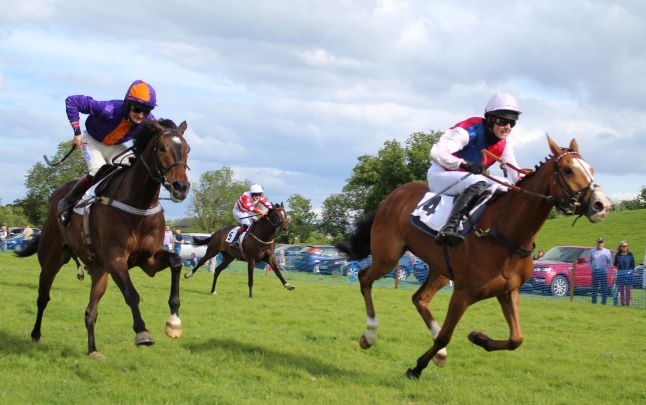 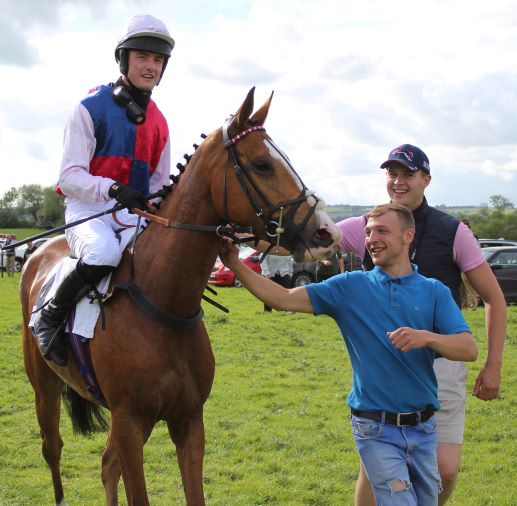 The day started well for the Phil Rowley and Ben Bromley when Outlaw Dream took the Restricted, but their task was made much easier by the departure of chief market rival Port Jack at the 5th. Guy Sankey and My Friend Freddie made a short-lived effort at the 15th, but the leader had sufficient reserves to see off his rival’s challenge approaching the last. 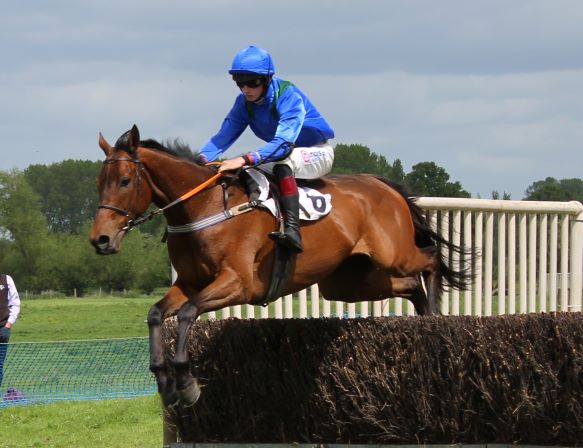 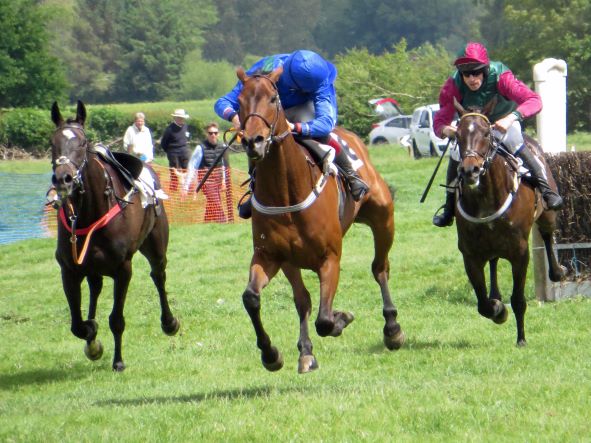 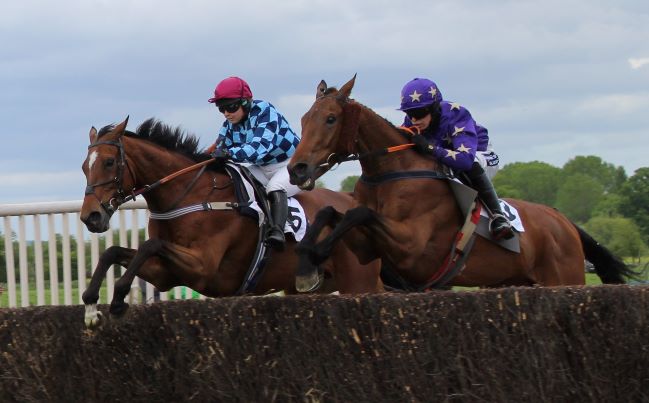 Less than 24 hours later and the momentum remains with James King as the reigning Champion took on Will Biddick in his own back yard and came away with two winners. He has now retaken the lead in the Championship and with more meetings “up country” this seems to favour the local jockey rather than his West Country based rival.

Luke Price has been instrumental in King’s Title challenge providing him with 11 winners since the 24th April, including two during the Exmoor meetings at Bratton Down on Sunday afternoon. With the Pembrokeshire meeting at Trecoed on the penultimate weekend of the season, this may provide the final piece in the jigsaw.

Luckello had opened his account at Bratton Down 7 days ago and returned to the scene of that triumph to take the Restricted by a comfortable 8-lnegths at the expense of Biddicks mount Bennys Miracle. Rose Iland won her fourth race of the campaign in the colours of Marita Warner-King by beating Ninth Wave and Will Biddick in the Conditions.

There were more local successes during the Melton Club meeting at Garthorpe with Vivaldi Collonges drawing clear in the home straight for a comprehensive win in the Conditions for Phil Rowley and Ben Bromley and provide them with some compensation for the loss of Valtor the previous afternoon.

Fergal O’Brien sent out another winner when Grageelagh Girl provided Kaitlin Perks with her first success after the partnership skipped clear of Ballydonagh Boy in the home straight in the Novice Riders. 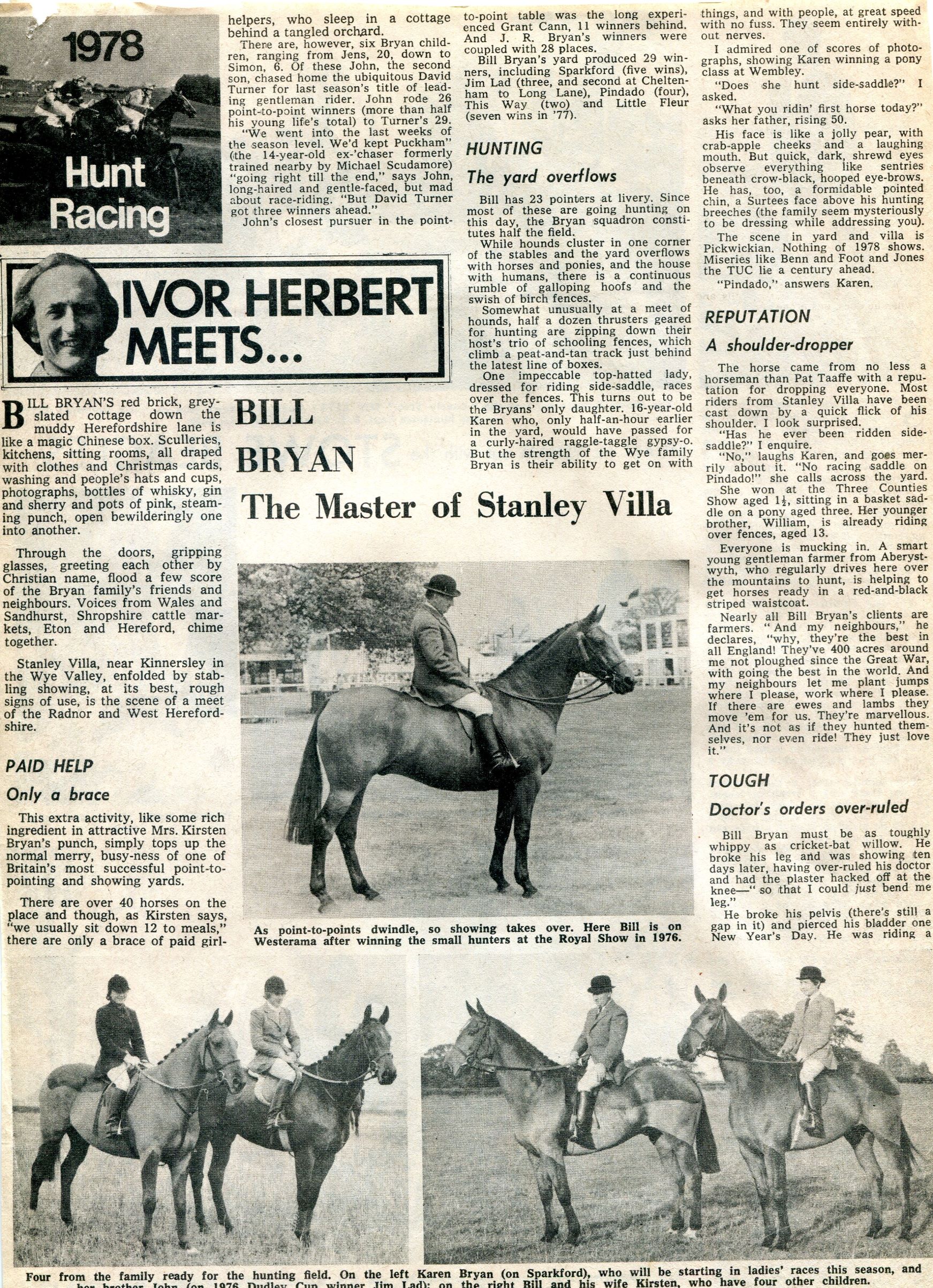 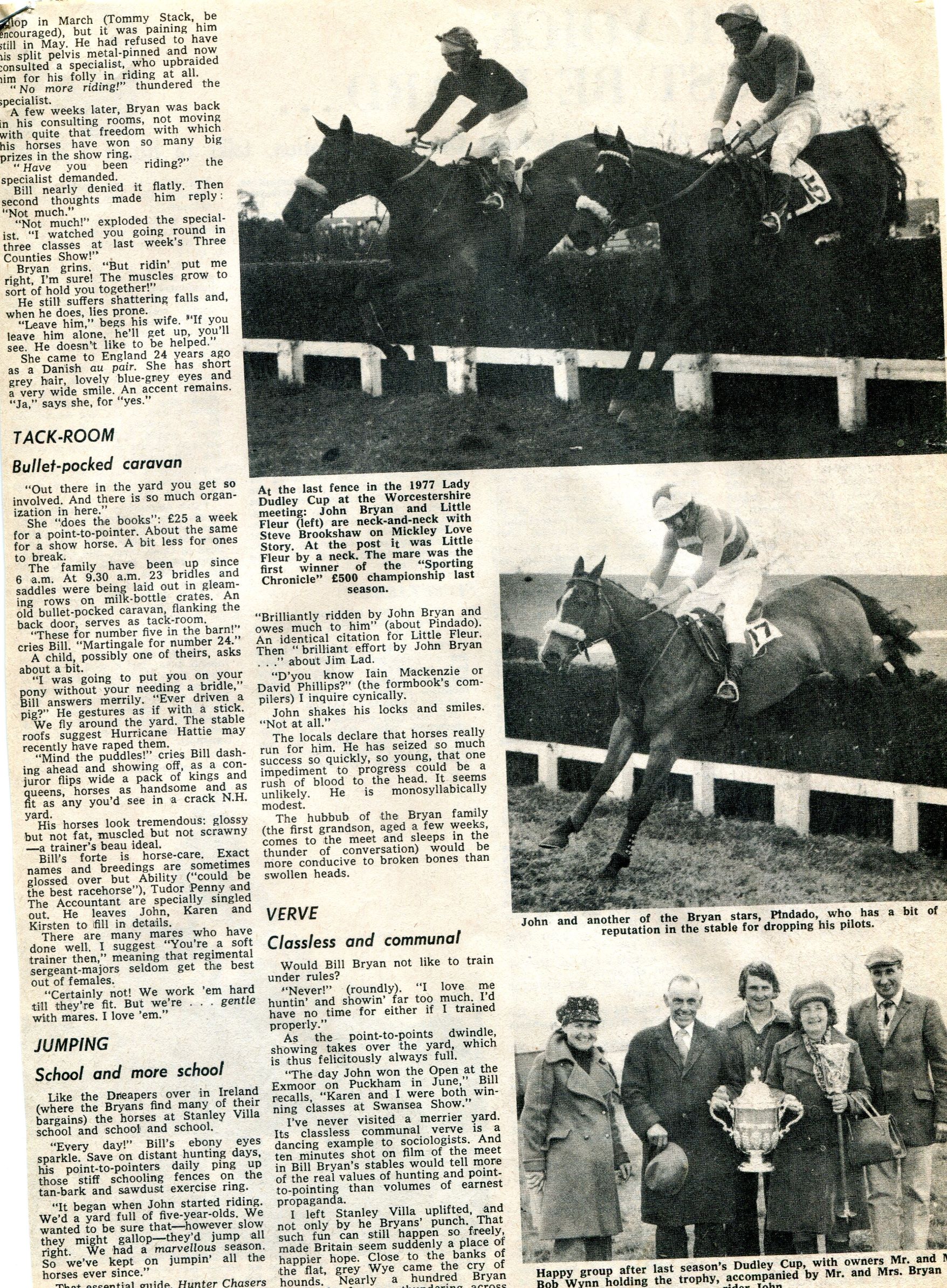