This meeting illustrates the myriad of challenges facing Point-to-Point organising committees. Last weekend high temperatures resulted in capacity crowds, but that meant watering was required to produce good ground for this weeks meeting.

Having made all those efforts, they must be scratching their heads to find a reason why only 31 horses chose to participate, while the remnants of Storm Hannah impacted on attendance figures.

Alex Edwards has a clear lead in this year’s West Midlands Area Riders Championship so unless things change dramatically during the final weeks of the season, Sam Jukes, Tommie O’Brien and Zac Baker are left battling it out for minor honours.

All three added to their tally during Saturdays Berkeley Point-to-Point at Woodford, with Gloucestershire based Jukes and Herefordshire’s O’Brien both riding doubles to narrow the gap on Baker whose solitary win enabled him to retain second place in this year’s title race.

Jukes struck first after R Bren’s success in the Members. The 6-year-old mare got no further than the third fence on her previous outing, but prior to that had won a Maiden at Kingston Blount for Hillesley owner Peter Ponting and his son Joe.

She was subsequently purchased by Will Gaskins, who currently shares the ownership with his wife Diana and Lucy Houldey, who is Roger Guilding’s sister.

She was then placed in the care of their near neighbour Sam Jukes and the trainer/jockey had his mount anchored at the back of the field when they were impeded after Court in Flight unseated his rider at the third. 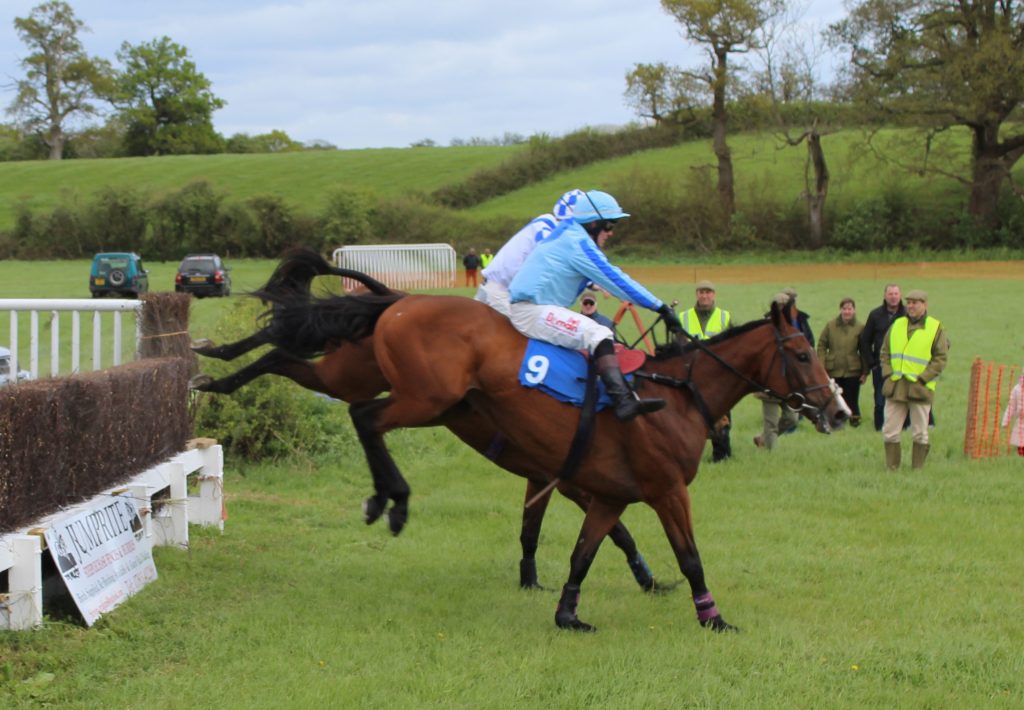 Geoff Barfoot Saunt and Get Rhythm took over at the 7th and were still in front as they turned back towards home. They began beat a retreat soon afterwards, and there was little between R Bren and Model Cloud over the next couple of fences. R Bren put in a better jump at the final obstacle which allowed the mare to assert on the flat. 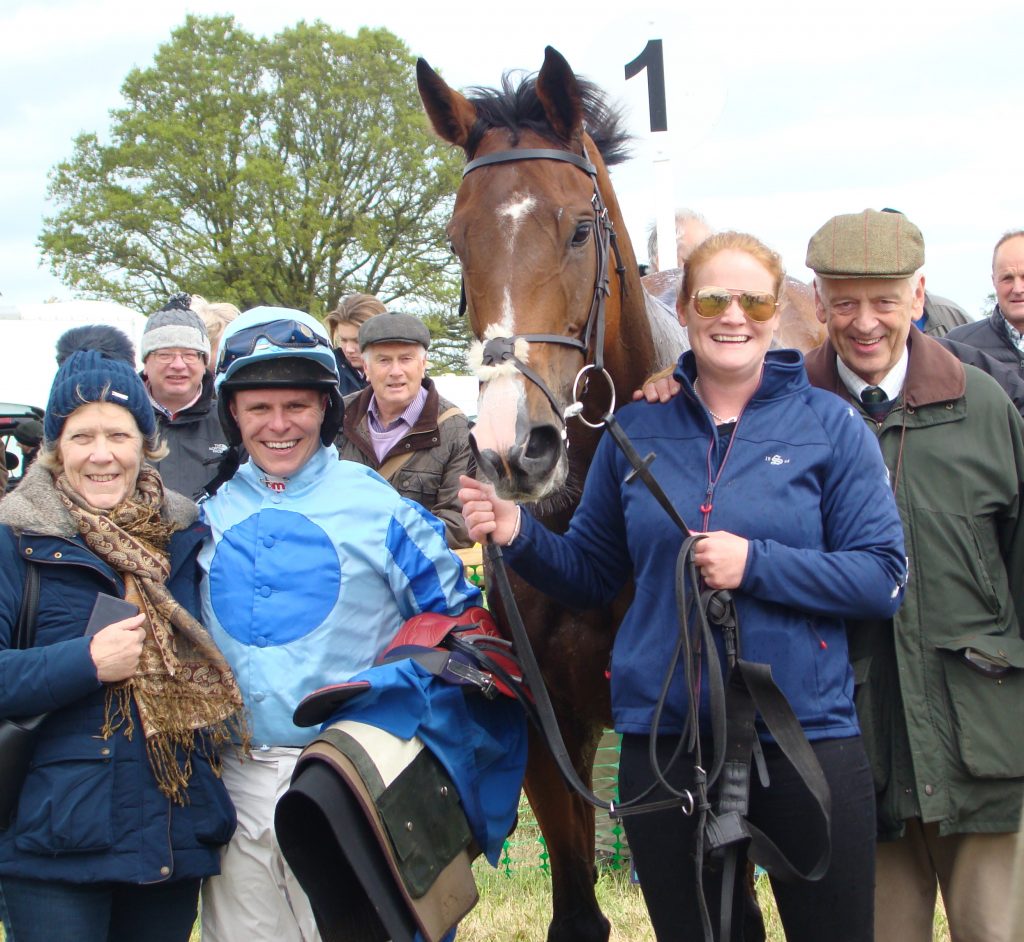 All smiles for winning connections after the mares success

Clive Bennett has been involved in Point-to-Point racing for 32 years but you get the impression that his horses recent run of form has been frustrating, with five second places since his last winner on 24th March.

That cycle was finally broken after Chasforgold and Sam Jukes came with a withering late run to snatch the spoils off the favourite Robin des People in the closing stages of the Mixed Open.

The season has also proved frustrating for Laverton trainer Emma Alvis who sent out her first winner of the season when Jeans Lady scored at Paxford on Monday afternoon. As often happens, once the dam has been broken further successes quickly follow and this proved the case with Chasforgold’s unexpected success. 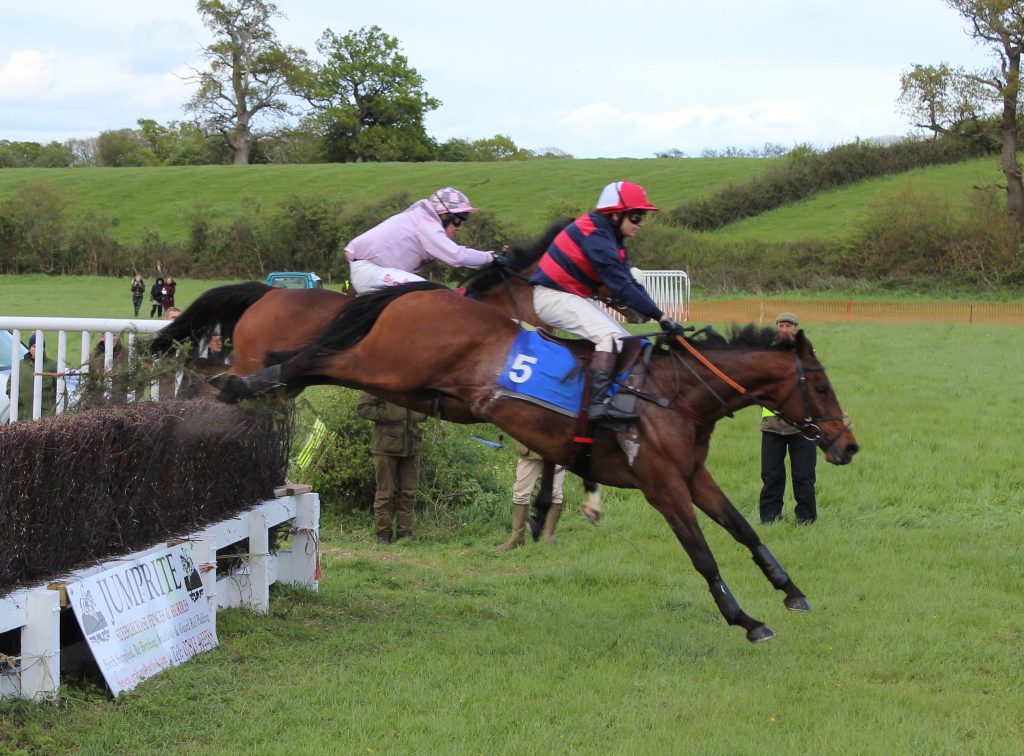 The leader Robin des People is out of the picture as Brackloon High and Chasforgold jump the last, but Clive Bennetts runner finished strongly to win by a neck

The 10-year-olds form has been below par so far this season and despite it being a 5-runner field, the bookmakers seemed to have written off his chances.

With More for Luck unseating Connor Baker at halfway the 4 remaining runners alternated in the lead until Sarazen Bridge and Robin des People started to apply the pressure turning back towards home. 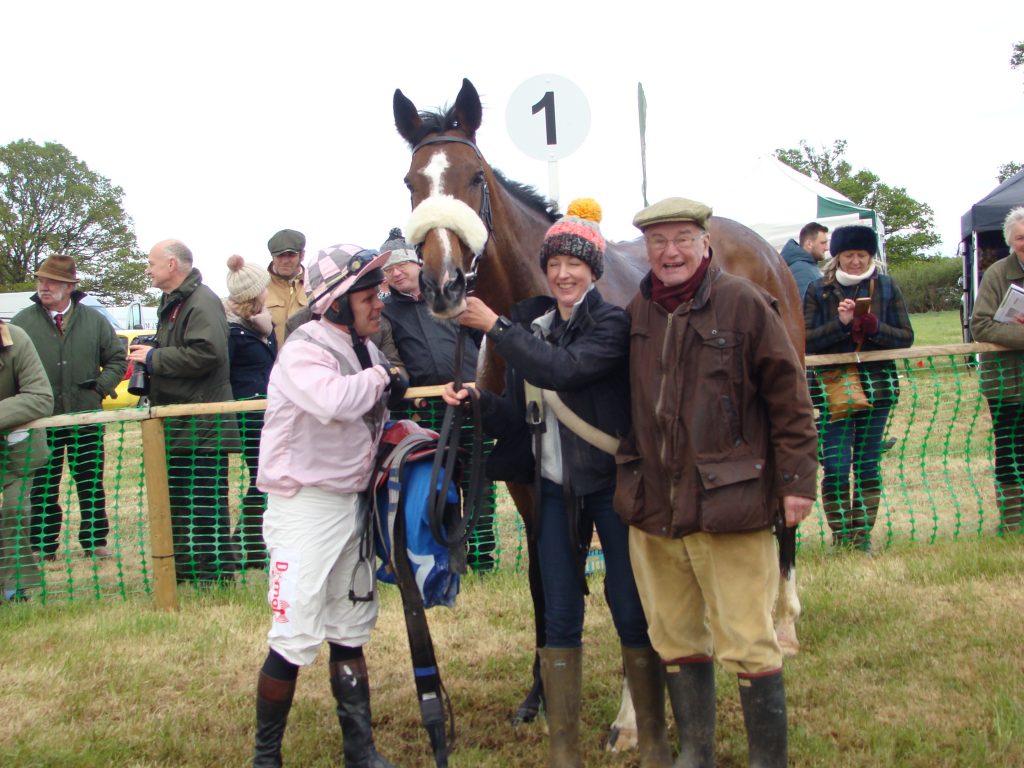 Chasforgold closed rapidly on the run in and the three horses were inseparable as they flashed past the post. The finish at Woodford is head on to the crowds so it is extremely difficult to accurately predict who has won.

Jukes had no doubts and rode into the winner’s enclosure with his confidence rewarded as the partnership were pronounced the winners by a neck with half a length between second and third.

Bennett was understandably delighted with this success. “The horse has not been running well this year, so this is a major surprise” while winning trainer Emma Alvis noted “he always seems to win on good ground”.

The Restricted produced a surprise result which were mainly due to the enterprising tactics employed by Zac Baker.

Bonanza Sam and Peter Mason started favourites on the strength of an impressive win in a 2-1/2 Maiden at the Monmouth whereas Stay Out of Court is more battle hardened although he has been difficult to win with.

Baker kicked his mount into the lead at the first and remained at the head of affairs for the remainder of the race, with these tactics aimed at exploiting any weaknesses in his rival’s stamina. 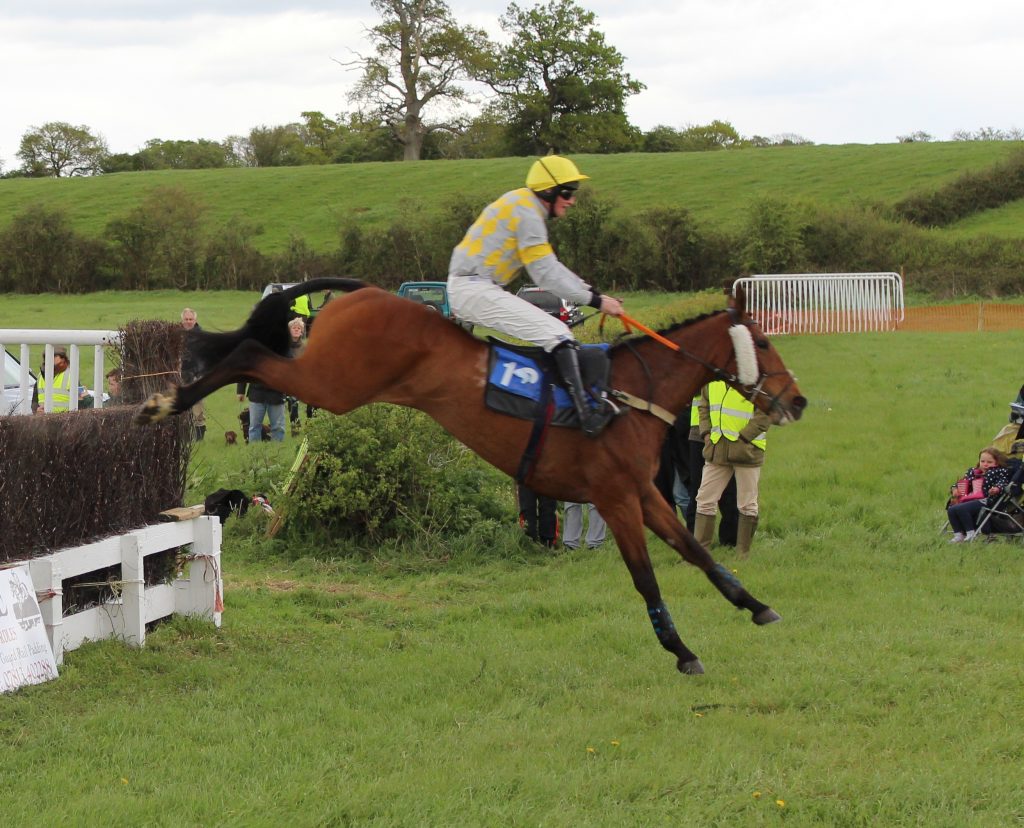 Stay Out of Court continued in front as they turned for home but Bonanza Sam and Master Hide both moved into challenging positions with the favourite poised to strike.

However, when Bonanza Sam was asked for his effort, the cupboard was bare and he began to slip out of contention and that allowed Stay Out of Court to score a clear-cut success for Westbury on Severn owner Alan Wintle and trainer Jane Broad. 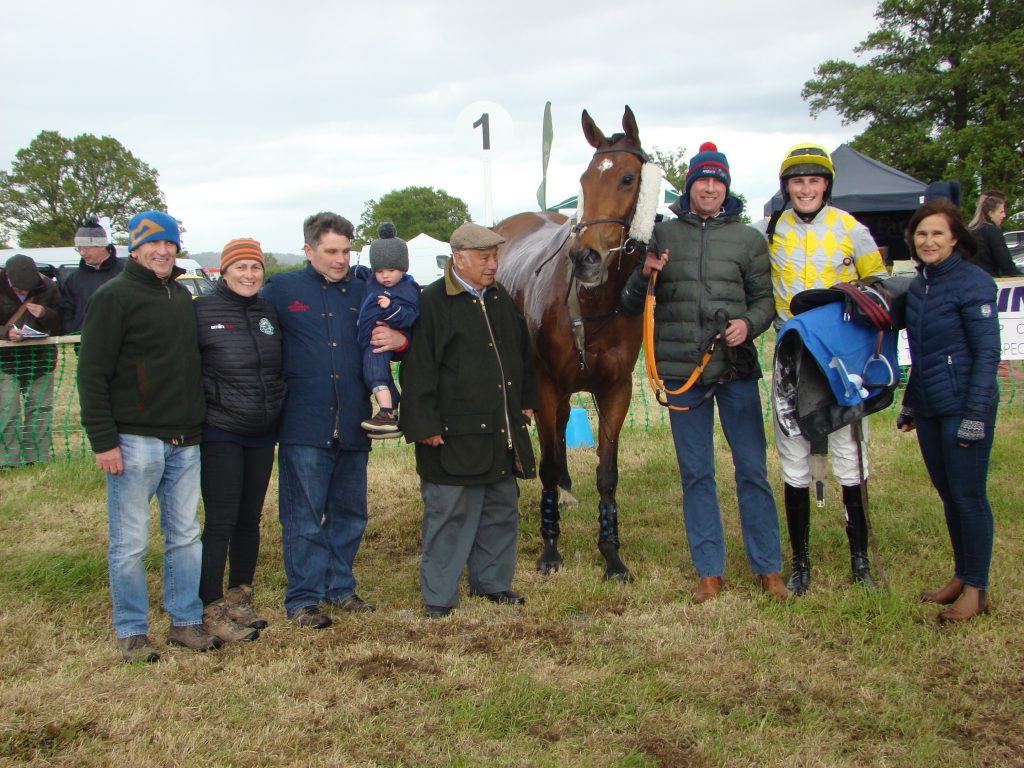 Tommie O’Brien and Sophie Lacey’s Woolhope stable always strike fear into bookmakers’ hearts when they have runners in Maiden races, and did so again with Red Nika in the Open Maiden.

The 6 runner race became a match during the final half mile with O’Brien exuding confidence on Red Nika while Zac Baker had not given up hope on the James Ridley trained Cashmoll.

Red Nika seemed to be going better than his rival all the way up the home straight and began to ease clear between the final two fences, but Cashmoll fought back approaching the final obstacle and was just behind when he crumpled on landing at the last. 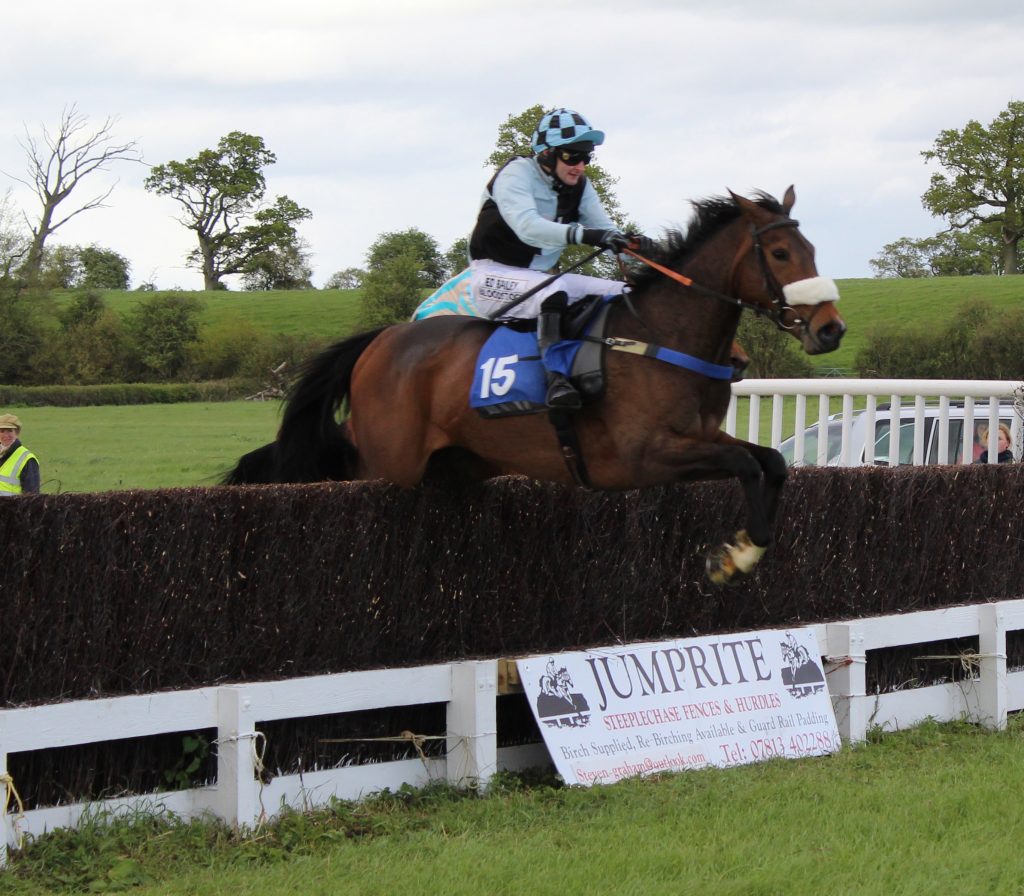 The first leg of the O’Brien double was provided by the Welsh trained runner Dino Boy in the 2-1/2 mile Maiden. The winner looked to be struggling at one point, but once he hit the front, he was able to put clear water between himself and his rivals.

There was another winner for the Principality in the Novice Riders. The unconsidered outsider Orange Nassau harried William Money throughout the contest, until Tom Britten accepted the inevitable when their chance was gone.

Earlier in the afternoon, Britten had finished in the runners up spot on Toowoomba who was no match for his solitary rival and odds on favourite Spanish Fleet in the Conditions.

Pointingwm and all its readers will wish to pass on their congratulations to 6 time Champion Will Biddick who broke Richard Burtons previous record of 414 winners between the flags on Saturday afternoon.