James King rode three winners on Sunday afternoon and with Jack Andrews (16) and Bradley Gibbs (15) both failing to add to their accounts, the West Midlands rider is now 8 wins clear of his nearest rival and well on his way to landing his first National Title.

He must have been questioning the wisdom of bypassing his local meeting at Edgcote in favour of the Knutsford Race Club fixture at Tabley after his first two mounts had been beaten but the tide turned and he then rode three winners to cement his position at the top of the Jockeys Championship.

A James King ridden and Fran Nimmo/Charlie Poste runner (Indigo Sea) suffered a rare defeat in the Tattersalls sponsored 4 & 5 year old Maiden, and the local jockey suffered a further setback when More Buck’s was turned over by Risk and Roll in the Barbara Bostock Mixed Open.

Electing to make the running on the Micky Bowen trained gelding King could never shake off the attentions of Bandsman or the Nickie Sheppard trained Risk and Roll. These three runners drew clear down the back straight, and King’s mount was the first to send out distress signals as they turned back towards home.

Having gone half a length up at this point Milo Herbert was looking round for non-existence dangers between the final two fences and went further clear as they raced towards the judge.

Waterloo Warrior has run consistently all season although that is not reflected in his form figures but after conceding weight to his rivals in early season, connections found a race (Keepers) where it was not necessary to do so.

The 9-year-old took an early lead but was last when the field passed the judge for the first time. With the favourite Bletchley Castle setting a strong pace, King moved his mount into contention with a circuit to run and into the leader’s shadow as these two horses eased clear around the final bend. 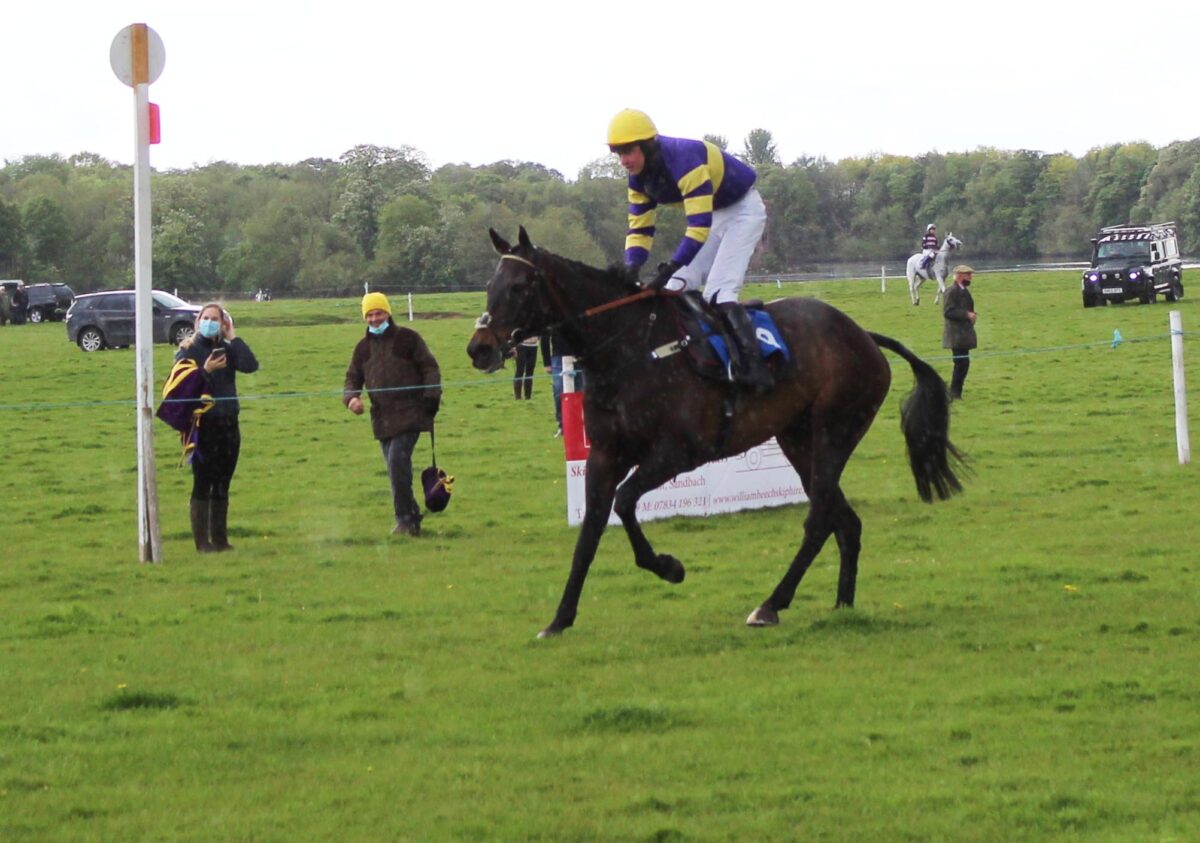 The favourite had no more to give whereas Waterloo Warrior had plenty left in reserve and extended his advantage over the final two fences to record a 15-length success.

The winner is trained by Angela Slatter for her husband Ian at their home at Toddington, near Winchombe. “I ride him all the time. We found he had a little bug at Mollington and he looked terrible in his coat. He had a long look at the last but that is just him”. 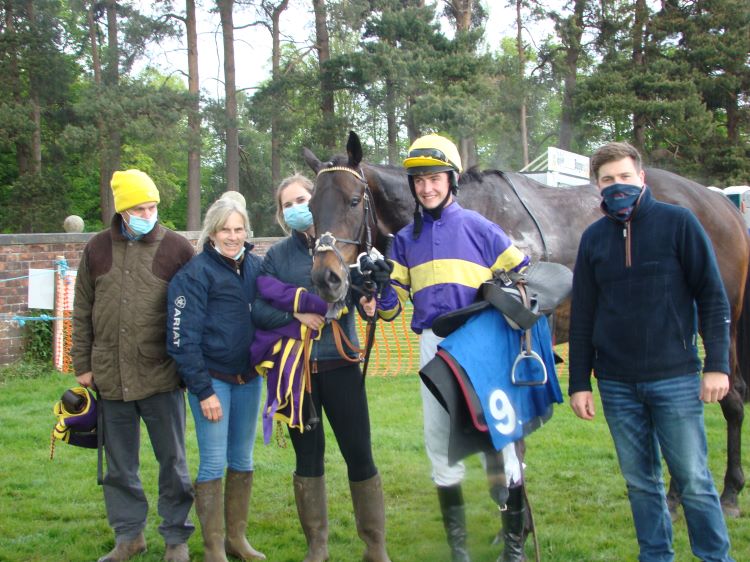 The Fran Nimmo/Charlie Poste/James King bandwagon rolled on with another success for For Rita in the PPORA Club Members Race. Having won her last two races, the 8-year-old mare was sent off an odds-on favourite but King was content to keep a watching brief as the Mollington winner Knockaderry Flyer set the pace.

King’s mount was just behind the leaders with a mile to run but moved up ominously before taking the lead on the bend by the lake. Iftiraaq came out of the pack to provide the only challenge in the home straight, but with the two horses racing on opposite sides of the course it was difficult to tell who was in front. 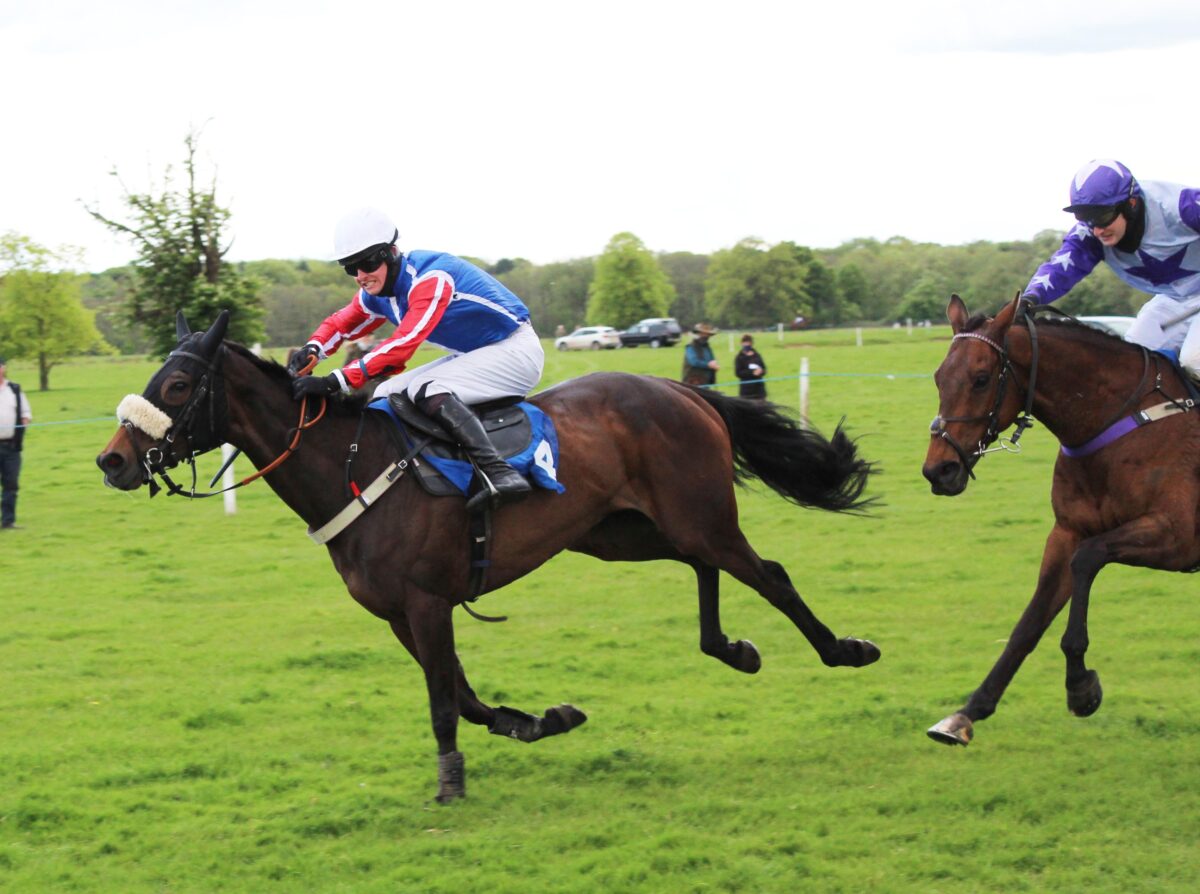 King scored his third success in the concluding 15 strong 6-year-old and upwards Maiden.

Forest Chimes started favourite on the strength of his run behind Williewonga at Sandon, while King teamed up with the Fran Nimmo trained Mahon Point who had finished unplaced in a Tipperary Bumper earlier in the year.

The lead alternated between Mahon Point, Forest Chimes, Madame Hannah and Spectacular Rival but it had not been a strong pace and six horses were still in contention down by the lake. This was quickly whittled down to two turning back towards home, as Forest Chimes and Mahon Point settled down to fight out the finish. 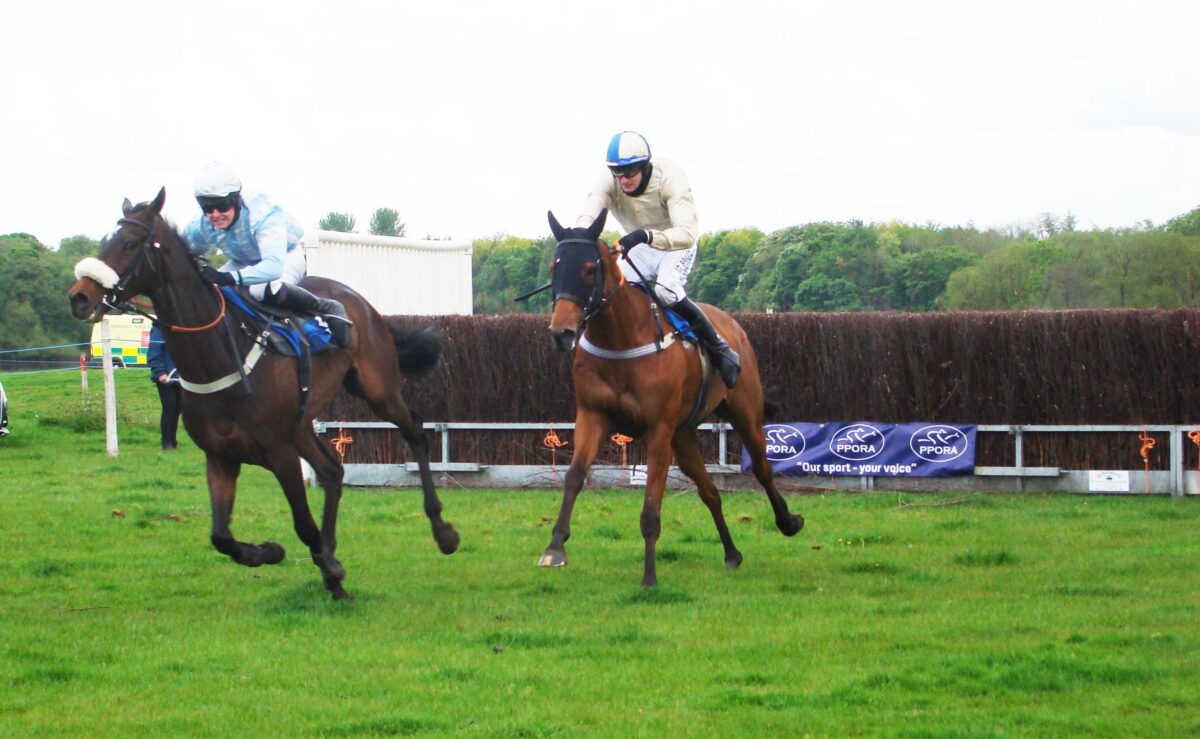 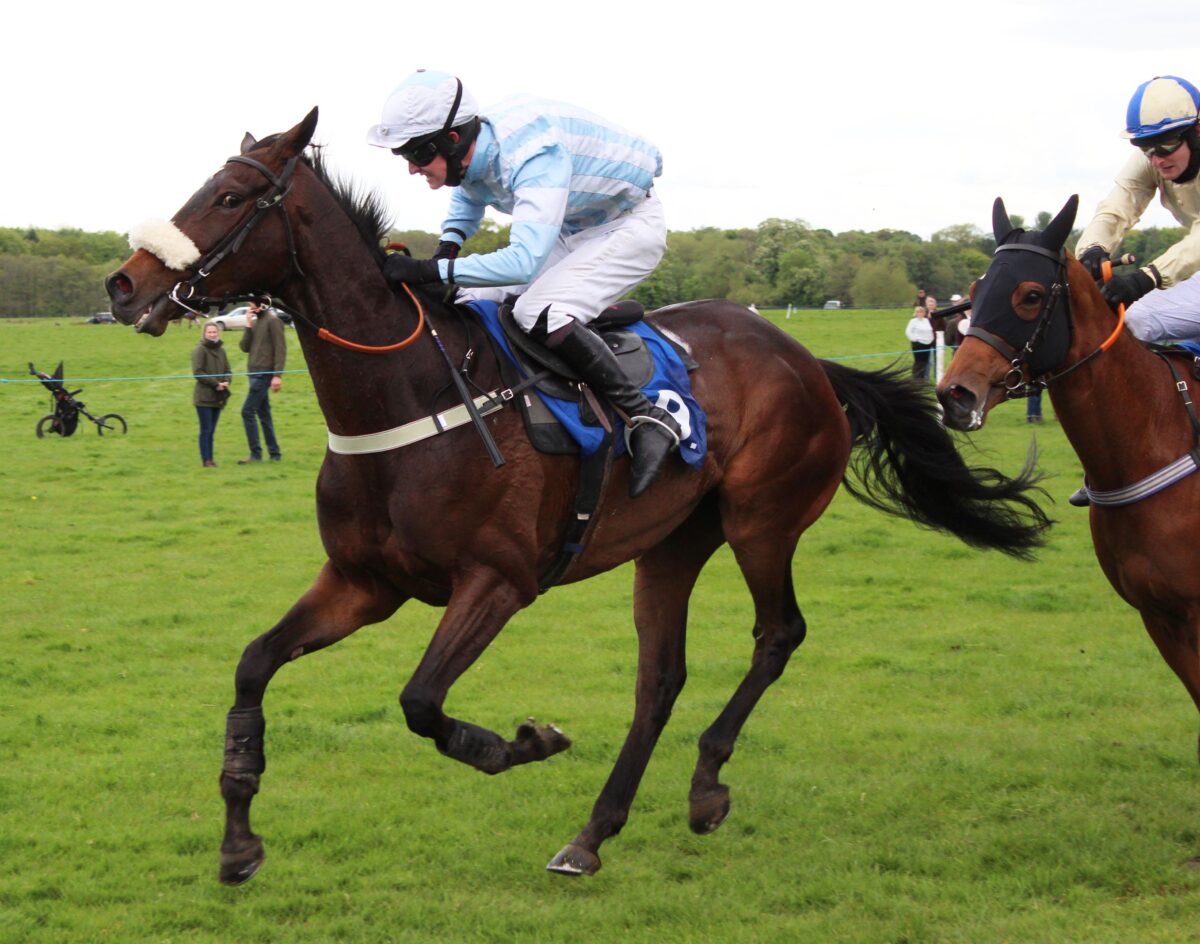 Mahon Point held a narrow lead between the final two fences, but the runner up fought his way back into contention at the last and with Mahon Point hanging towards his rival the race was in the balance but King managed to get his mount back on an even keel and gained the verdict.

King was to prove Tommie O’Brien’s nemesis throughout the afternoon beating his rival in the Keepers, PPORA Club Members and the Maiden and to add insult to injury O’Brien was unseated from the hot favourite Hazel Hill in the Lord Daresbury North West Area Classic Final.

Duke Arcadio adopted his customary front running tactics and the opposition was content to let him have his own way. Mr Snuffles and Hugh Edwards jumped to their left at the 13th which caused traffic problems to the runners behind them and when he did so again at the next Hazel Hill and O’Brien parted company. 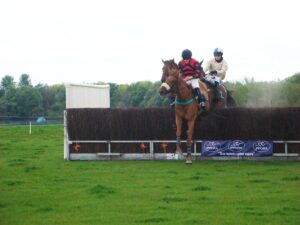 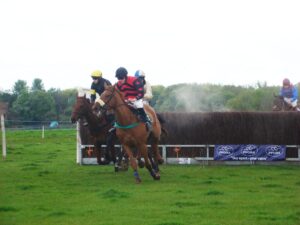 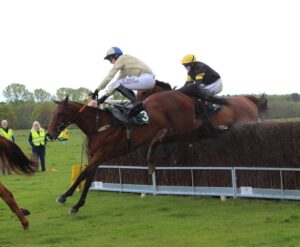 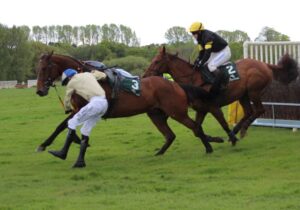 The race developed into a match between Duke Arcadio (Toby Wynne) and Garde Ville (Immy Robinson) during the final mile and for most of the time it looked as though Duke Arcadio was going to prevail.

He held a 4-length advantage at the penultimate but was sending out distress signals approaching the last and starting off up the run in Robinson’s mount suddenly began to claw back the deficit. 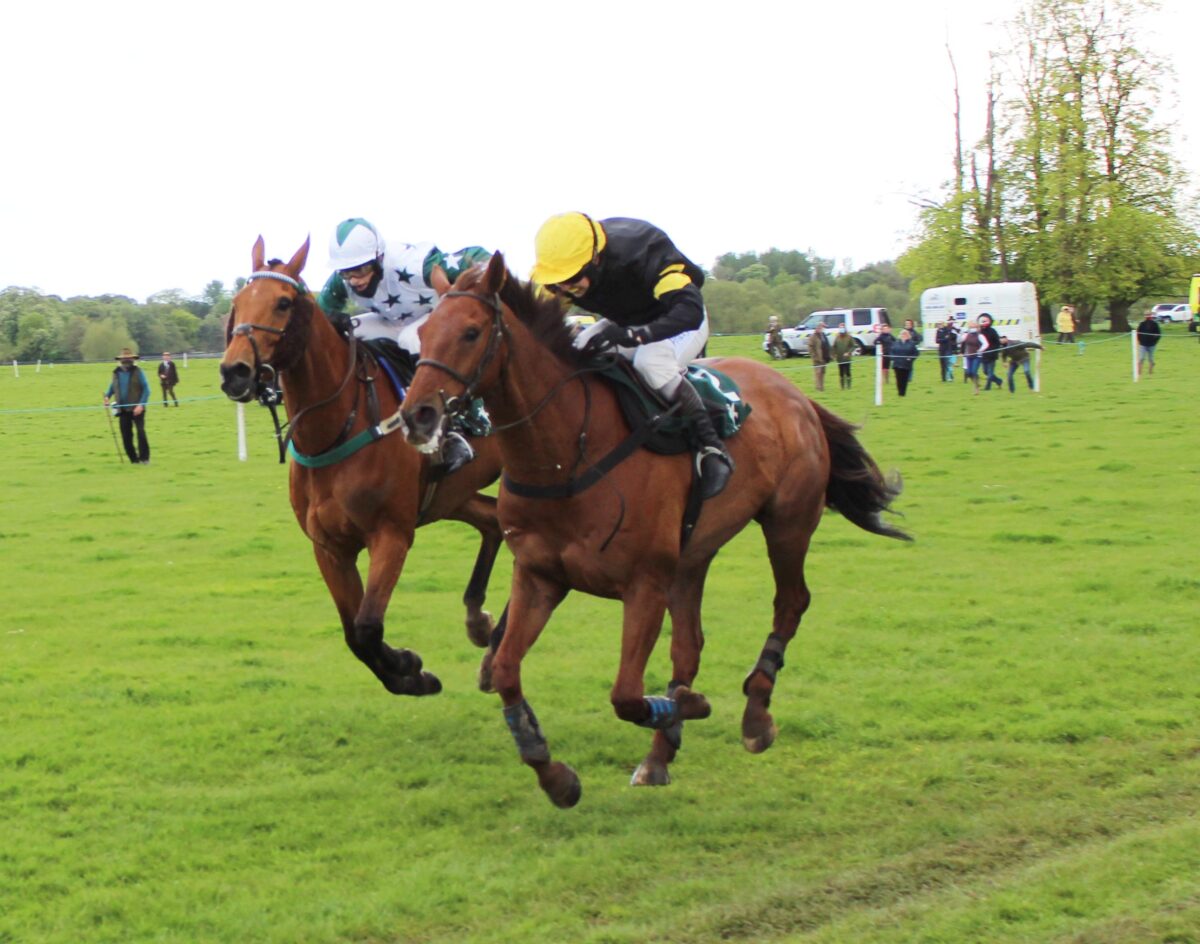 Duke Arcadio having led from flag fall was caught in the final stride, with Robinson confirming “she definitely got there” on the way back to the winner’s enclosure.

O’Brien did not leave the meeting empty handed as he had teamed up with the Jo Priest trained Ballyboker Breeze to land the Veteran Horse Conditions.

With Bernardelli an absentee, the 13-year-old faced just two rivals and then had just one to beat when Miss Glance was pulled up with a circuit to run. Ballyboker Breeze jumped with his normal exuberance and was always doing enough to maintain a 3-length advantage in the home straight, which he extended as Port Melon had no more to give on the run in. The horse is a credit to connections; he was turned out looking a picture and jumped with the enthusiasm of a horse half his age. 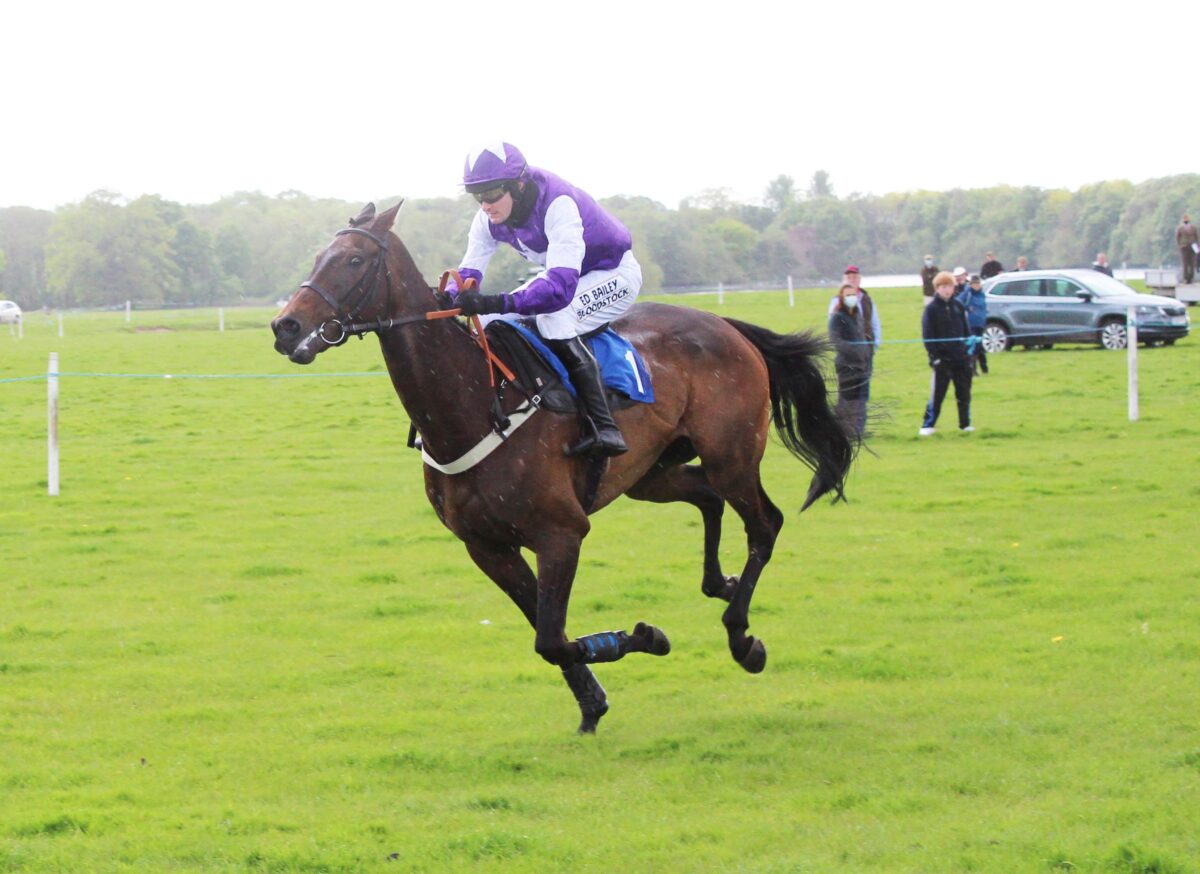 Tommie O’Brien and Ballyboker Breeze sprint up the run in

West Midland supporters had their loyalties tested over the weekend with some chosing Tabley, while others preferred Edgcote. The latter had to endure several heavy showers and longer periods of rain, while conditions at Tabley were more springlike. Both meetings saw local successes.

T.V. presenter Luke Harvey could not have been more delighted with the performance of Drumlynn who returned after a two years absence in the Intermediate.

The Cotswold qualified 10-year-old had a protracted battle all the way up the home straight with the race fit Benefaktor with both horses giving their all and neither willing to accept defeat. 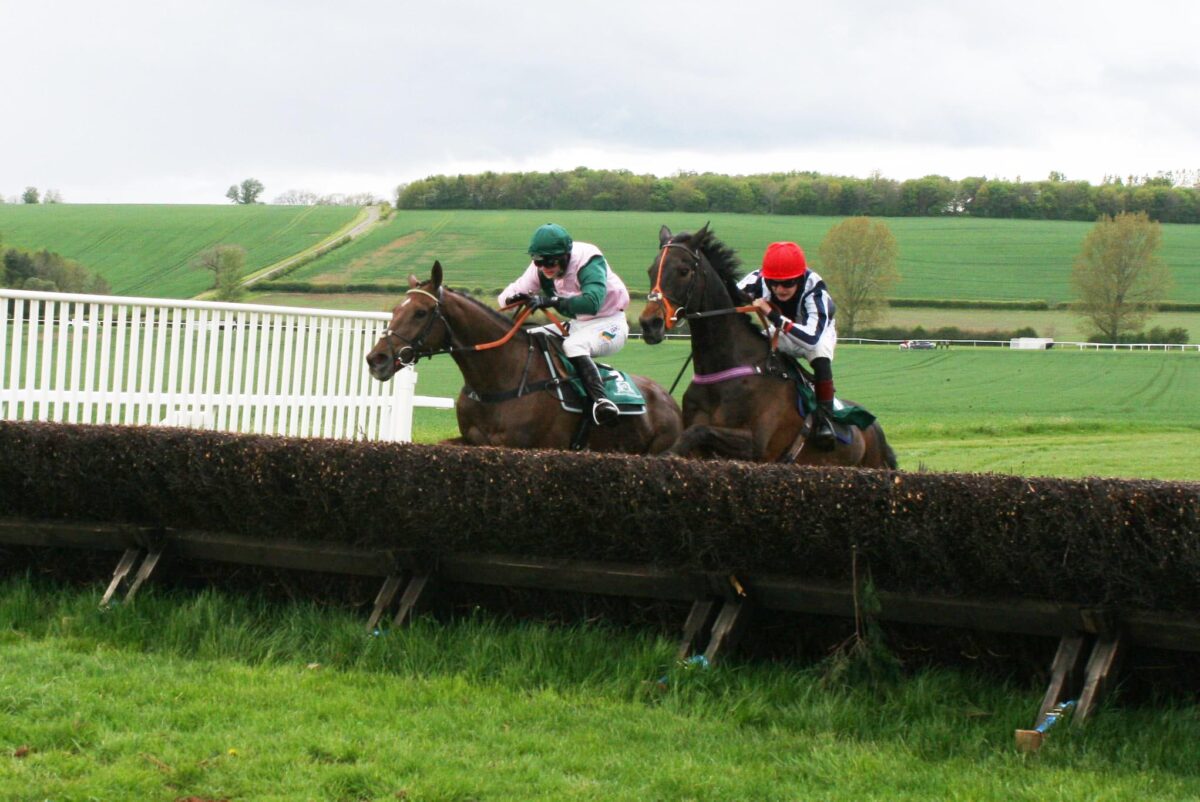 Benefaktor (pink colours) and Drumlynn (nearside) are inseperable at the last

They were locked together passing the judge and some people were surprised by the margin of victory afforded to Gina Andrews’s mount, because the official Form Guide race reader opted for a dead heat – however it is the Judge’s verdict that counts.

It was a day of close finishes at Edgcote and there was another in the Mixed Open which went in the favour of Matt and Sally Burford’s Cotswold qualified and Sally Randell trained Barney Dwan.

Fifty Shades looked dangerous with a mile to run, where Jack Andrews was driving King of the Clothe to remain in contention, while Barney Dwan made a couple of small errors.

Straightening up for the judge, it looked as though Barney Dwan would have to settle for minor honours but he was back on level terms when knocked sideways when King of the Clothe made an error at the second from home. 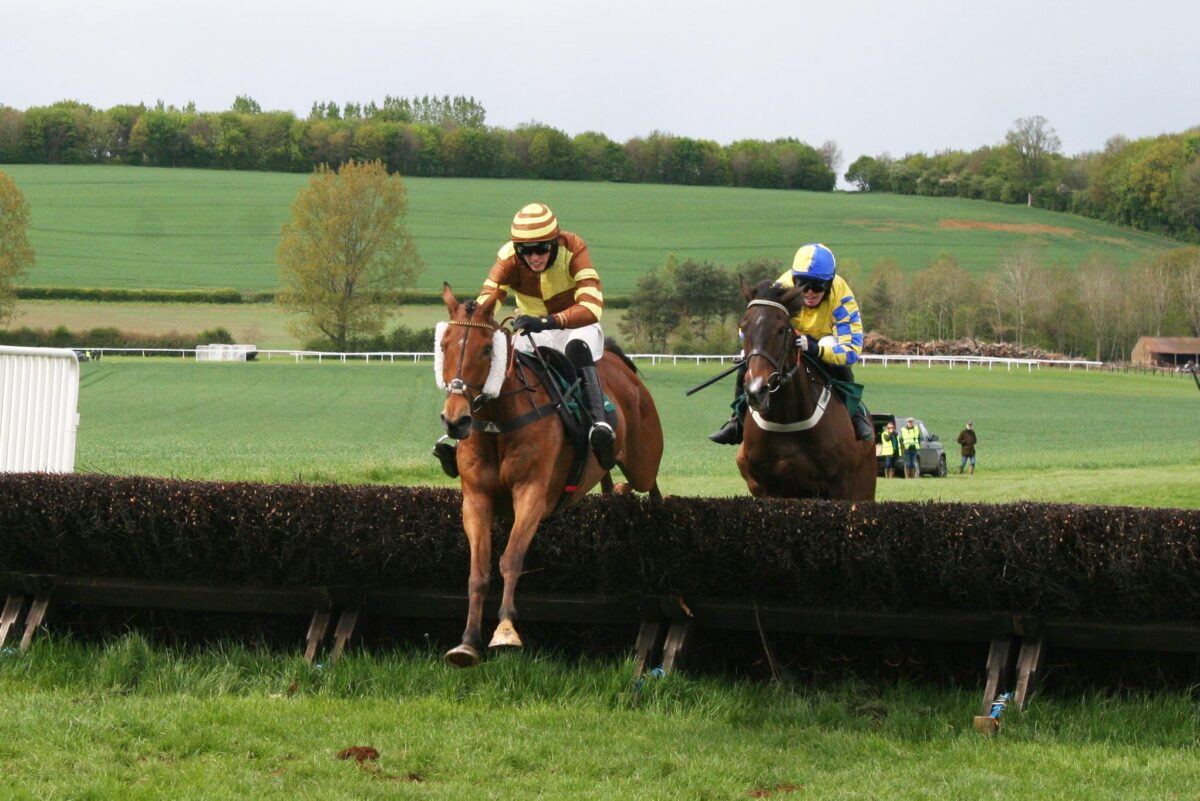 King of the Clothe hold a narrow lead over Barney Dwan

That could have proved decisive but Georgie Benson and Barney Dwan fought their way back into contention and passed their tiring rival to claim the narrowest of victories, but they would have surely gained the verdict in the Stewards Room if the verdict had gone the other way.

The winning jockey was uncertain if they had prevailed “the horse was on and off the bridle but came home best of all so that is all that mattered”, while race analyser Charlie Poste pronounced, she was “a deserved winner after being jumped across two out”.

There was another blanket finish in the Print Concern Supports the NHS Restricted Race where two necks separated the first three home. Bradley Gibbs and Post No Bills made a brave attempt to see off all of their rivals and very nearly succeeded, but unfortunately made an error when it mattered most – at the last. 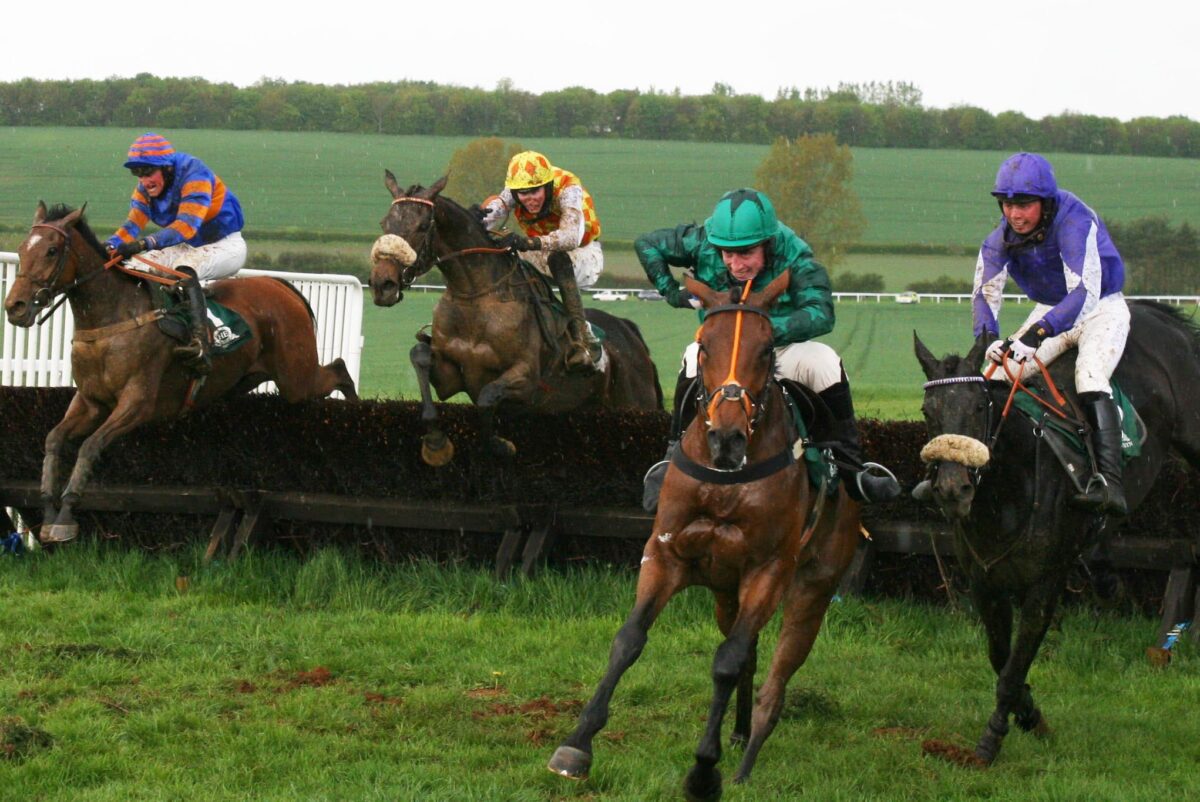 Aaclassofgold (left), Chongalolo, Post No Bills (green) and the eventual winner Luscious Lilly at the last

Zac Baker produced Aclassofgold who had hit a flat spot entering the home straight with a well-timed run to join issue with the leaders at the last but with the three-horse split across the course, Post No Bills and Luscious Lady fought it out on the stands side while Aclassofgold ploughed a lone furrow on the far side and just lost out in a bobbing finish.

Baker gained compensation for that defeat when Master Sunrise rolled back the years to take the PPORA Club Members.

Sent to the front from the start, Mervyn Jones 12-year-old put in an exhibition round of jumping which stood him in good stead throughout the race. Entering the home straight it just looked a matter of time before the leader was swallowed up by his rivals. 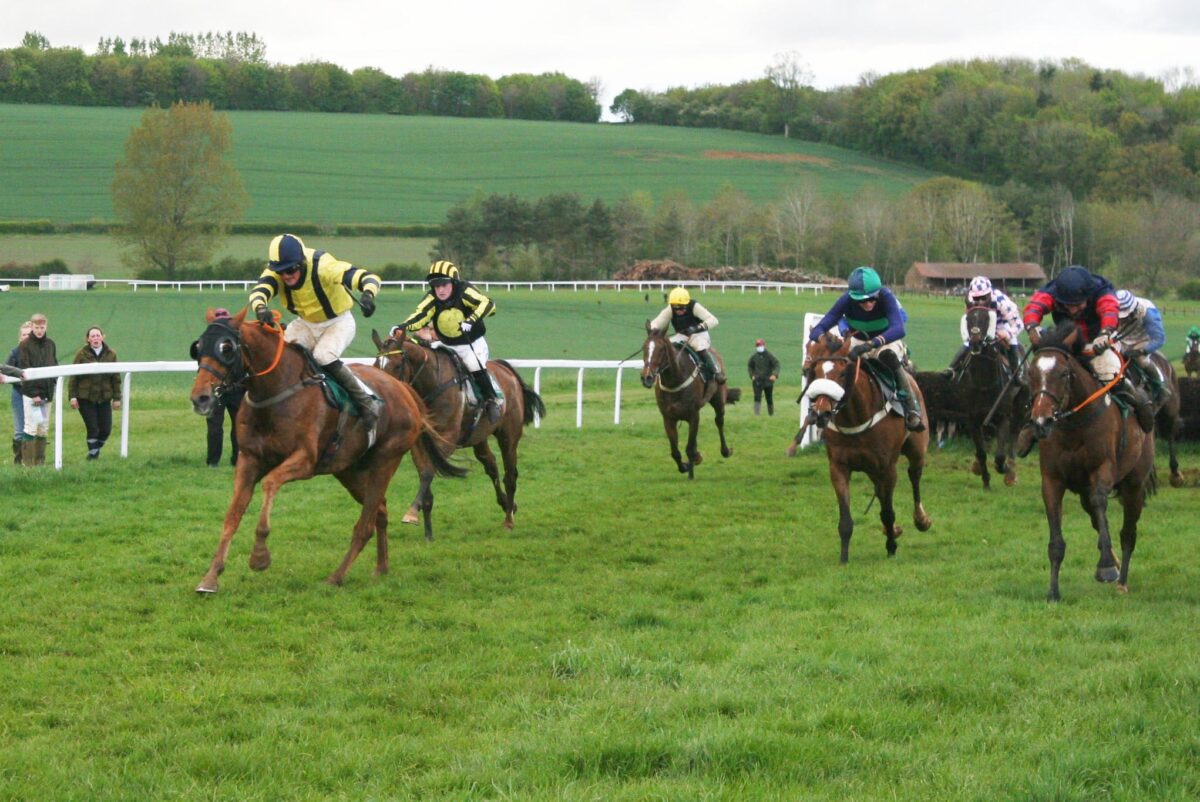 Master Sunrise had not read that script however and every time the opposition got within touching distance, he stuck his neck out, put in another prodigious jump and with the opposition unable to match either his enthusiasm or determination the 12-year-old ran his heart out to claim the spoils for trainer Callum Grittiths.

Photo’s courtesy of Graham and David Fisher and Pete Mansell

Oliver Greenall, who was Britain’s men’s champion in 2007/08, is already well established as [..]
More info

What price a West Mercian Flat champion at the end of the year?

The West Midlands isn’t usually known for its flat racing pedigree. If you’re from [..]
More info