When the Point-to-Point season went into hibernation due to the Covid lockdown James King’s name did not appear on the list of riders in contention for the Jockeys Title.

Since the enforced break King has come back with renewed vigour and is currently enjoying a purple patch which has carried him to the top of the Rider’s Championship where he is just on front of multiple Champion Will Biddick with Bradley Gibbs breathing down both their necks in third.

The two main protagonists both rode three winners over the weekend, which allowed King to maintain a narrow lead and this battle is providing the right ingredients for an exciting climax to the Jockeys Title.

The end of season normally centres on West Country meetings but this year the revised schedule means the scales are more evenly balanced so the battle is likely to go right down to the wire.

With the Torrington Farmers end of season finale at Umberleigh proving another Covid casualty its potential replacement at Kingston Blount could provide the showpiece which allows the sport to end on a high note.

Having ridden a 33-1 winner at Chepstow the previous evening King showed his Championship credentials by forcing More Bucks home in the Quorn Conditions at Garthorpe.

Tom Ellis’s Kimble winner Al Shahir headed the market but King was determined the favourite would not have an easy race and although their jumping was less fluent than their rivals they always came back for more and the two leaders began to press on at halfway.

Andrew’s mount looked to be going best at the top of the hill but King kept cajoling, pushing and driving his mount and that paid dividends as his mount inched clear approaching two out.

More Bucks kept responding and drew further clear of his toiling rival between the final two fences with Andrews accepting defeat halfway up the run in.
“I was made to work hard for that but he should win a couple more before the end of the season” commented the rider later.

King suffered a setback in the Mixed Open when Always Lion was pulled up when travelling easily soon after halfway with a reoccurrence of leg problems, but the West Midland Area Champion elect was back in the winning grove after partnering Largy Mountain to victory in the Restricted.

Successful at Mollington a few weeks earlier, King had his mount at the back of the field until the start of the final circuit. The partnership made steady progress down the back straight and were poised on the heels of the leader Rebel Dawn Rising as they came downhill into the home straight.

King’s mount hit the front at the second from home and stormed to victory to provide Fran Nimmo with yet another winner.

“He likes a strong gallop, so he can be switched off. He jumps well and likes coming through horses and we had ideal conditions today” King said before picking up his prize.

The rest of the afternoon belonged to Worcestershire trainer Tom Weston. The Hindlip handler did not have any runners between the flags until late March but has hit the bar on a number of occasions since then with 4-year-olds such as Post Chaise, Blackwell Bay and Hollow Style all catching the eye.

His horses have been running well and things finally turned in his favour when Pilot Show made up for those near misses by landing Division I of the Maiden under Luke Scott.

Kostantina set the early pace before By Appointmentonly and Dale Peters took over at halfway but he was never able to shake off the attentions of the two four-year-olds, Pilot Show and Sure Listen (Nimmo and King).

Turning back towards home Pilot Show claimed the lead and despite showing signs of greenness began to ease clear of the long-time leader By Appointmentonly, while Sure Listen had run his race and Go On Chez was apparently floundering in fourth. 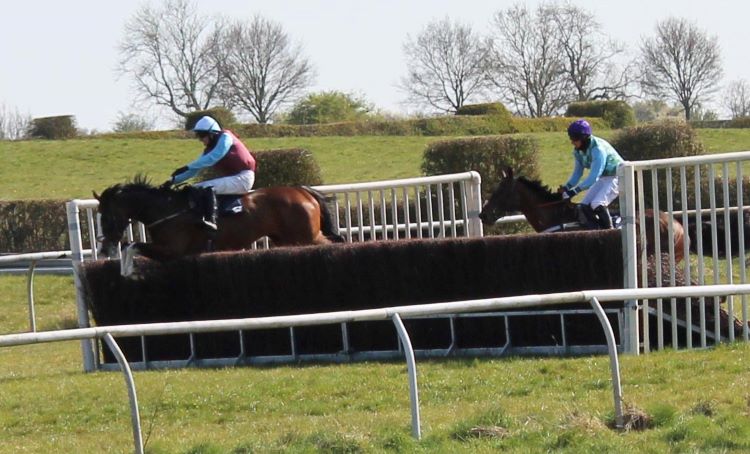 Pilot Show leads By Appointmentonly at the last

Pilot Show was far from foot perfect at the penultimate but was still two lengths clear when he dived to his right at the last. He started off up the run in with a clear advantage but Go On Chez was now getting into full stride and swept past two toiling rivals but was unable to reel in the leader who clung on to win by three quarters of a length.

“It’s nice to get one on the board and be competitive at last” said Weston who recalled he had brough the winner as a foal in 2017. 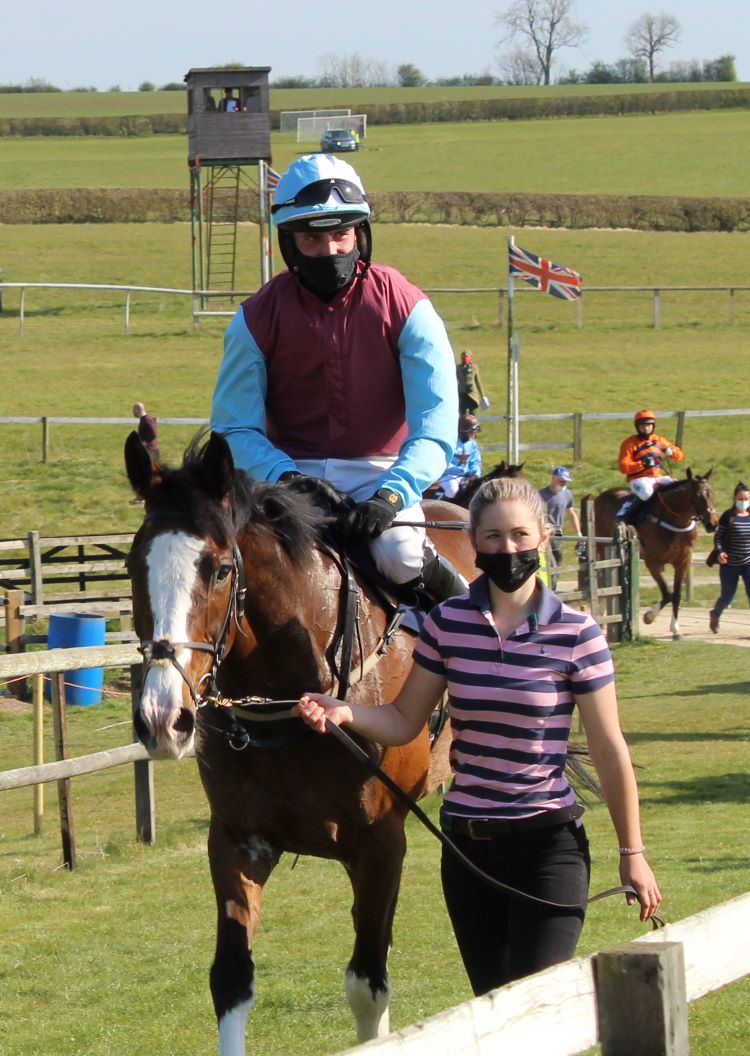 Unfortunately, Stumps or Slips looks as though he still has a lot to learn and the Weston representative was pulled up soon after halfway in Division II of the Maiden, but that same remark cannot be associated with King Arise who scored an impressive win in the Flat Race under Luke Scott’s guidance.

Whitsand Bay and Up Next vied for favouritism but there was some support for Gina Andrew’s mount Universal Run with the latter dictating the pace from the start. The tempo increased as they went out onto their final circuit but the order remained unchanged running downhill and the home turn. 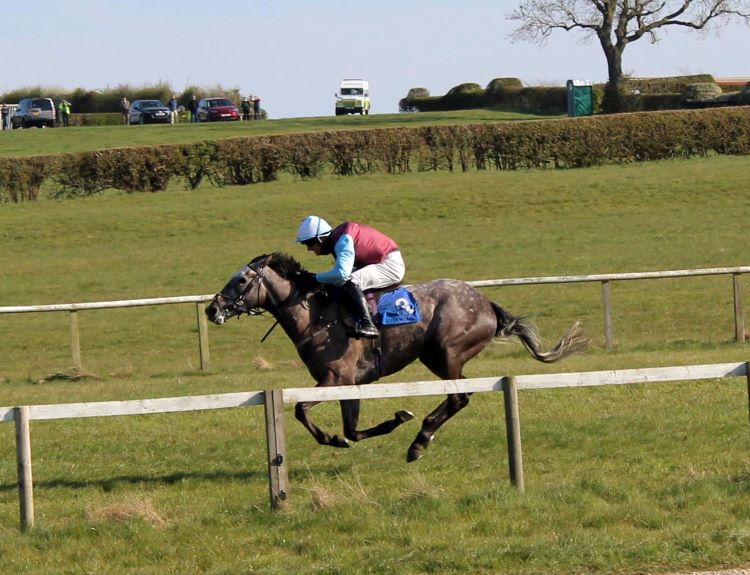 Universal Run still held a narrow advantage bypassing the second from home but Luke Scott switched his mount back inside that runner approaching the last and that was the catalyst for them to quicken clear to score by three lengths and provide a second winner of the day for Weston and Scott. 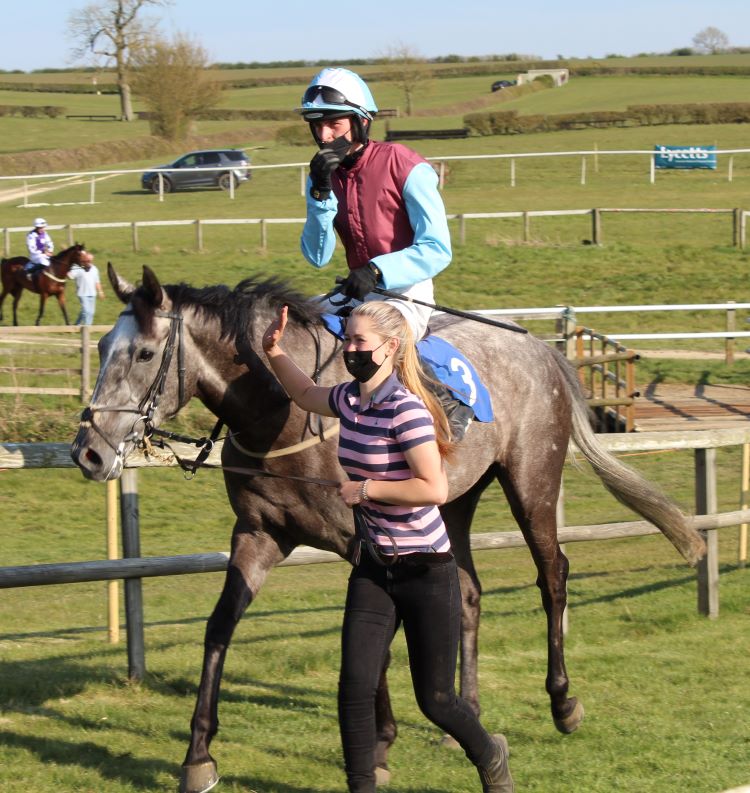 King Arise makes it a double for jockey Luke Scott

The contrast between a well-watered course at Garthorpe and Larkhill on an arid Salisbury Plain 24 hours later (a meeting that had been rearranged to fill the void left by other casualties) was there for all to see with the Wiltshire course attracting just 20 runners, a void race and a walk over.

James King continued his winning run when he teamed up with the Keiron Price trained Best Pal to land the 5 runner Flat Race.

The 4-year-old was sent to the front from the start with King gradually increasing the pace over the final mile, which meant they drew clear of their rivals over the final two furlongs and stayed on well to claim an easy success.

Winning owner Jason Rees said later “We’ve had him for about 9 months after he was brought privately in Ireland. This is our first visit to the course. He is a baby but does everything well. James said once he got round the bend, he let the choke out”.

King reported “He knew the job well so the idea was to make use of him and he was putting in his best work at the finish. He had an over girth on and is not used to it so was playing up in the paddock beforehand”. The horse has Welsh connections but races under a Cotswold Vale Farmers certificate.

King got a good tune out of Jason Warner’s Long Mile Road in the Intermediate. They were prominent throughout but lacked the pace to keep tabs on their rivals in the home straight and eventually had to settle for third place.

Will Biddick did not have to work as hard as King for his success at the meeting with Spencer Moon walking over in the Mens Open and was expected to ride another winner in the 6-year-old and upward Maiden.

Riding the favourite Spring Break they were unable to keep on terms with My Little Cecil during the final mile and Dan Ellis mount strolled home for an easy success.

Tim Sleath’s 6-year-old had pulled up at Higham but is unlikely to find an easier opportunity than this and took advantage of that situation to land the prize for his Berkeley based owner.