Kingston Blount staged the final meeting of what has proved to be the most difficult period in the sports history. It proved a worthy replacement for Umberleigh’s traditional end of season jamboree, so all concerned with the meeting deserve the praise heaped upon them.

Due to the truncated season several National Awards had to be resolved at this meeting, and they were with Ben Suttons treble securing the Male Novice Riders Title, while Natalya Irvine victory on Blazing Tom secured the Ladies equivalent with Sir Mangan taking the Award for the Leading Horse.

As expected, multiple winner Gina Andrews added yet another Ladies Title to her C.V., while James King stormed away from his rivals in the closing weeks of the season to land his first Jockeys Championship.

King’s success was the first victory for a West Midlands qualified rider since Julian Pritchard took the title back in 1999, while Brookthorpe based owner/trainer and Cotswold Vale Farmers Secretary Jason Warner thoroughly deserved to be crowned the Leading Owner with 14 successes which was double that of his nearest rival.

T.V. Pundit Luke Harvey spent Sunday afternoon basking in the Oxfordshire sunshine and was dressed accordingly, but latter in the week will be required to don top hat and tails as part of the ITV team at Royal Ascot.

Drumlynn had been beaten at Edgcote a few weeks ago but Harvey elected to allow his gelding to take his chance in the Conditions. Ben Bromley sent his mount into the lead as they came off Crowell Knoll and they had their rivals at full stretch down that line of fences.

Drumlynn was harried by Waterloo Warrior and Fleur de Pommier throughout the final mile and between the final two fences it looked as though James King might pull the iron out of the fire, as the leader slowed dramatically approaching the final obstacle. 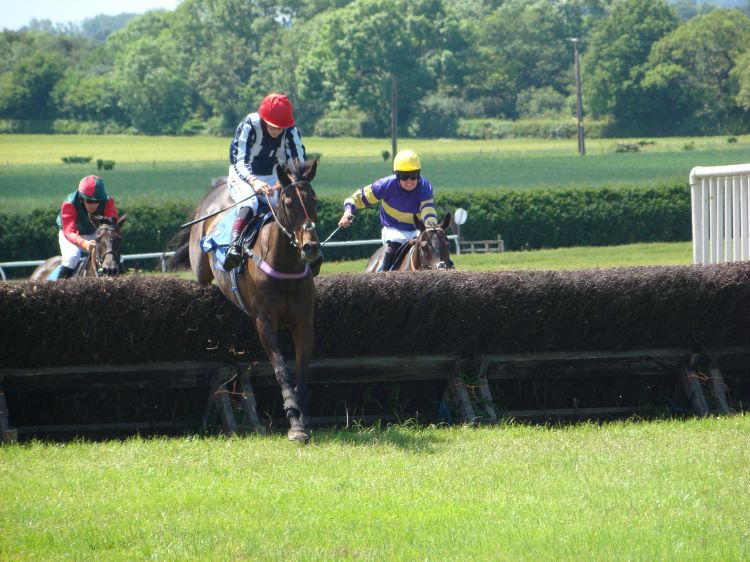 Drumlynn and Ben Bromley lead Waterloo Warrior at the last

Some reports question Waterloo Warrior’s attitude, but overlook the fact that on six out of his seven outings this season Angela Slatters gelding has had to concede lumps of weight to his rivals and Bromley’s mount took advantage of that situation by pulling clear as his rivals effort petered out at the last. 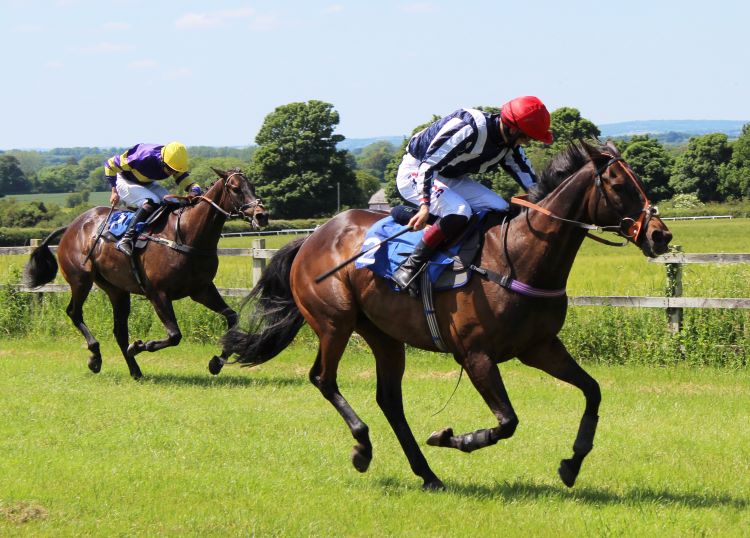 Drumlynn retains his advantage on the flat

Harvey is currently based at Postlip, near Winchcombe and qualifies his horse with the Cotswold was eloquent about his support for the sport and full of praise for the efforts that Alan Hill had put into the course’s preparation. which allowed the season to end on a high note.

It did not take long for Champion elect James King to get back on the score sheet when he guided Kaproyale to victory in the Restricted.

Eole d’Un Regard and Barnaby Treneer stole a clear advantage as they came off Crowell Knoll but halfway down the back straight King’s mount started to move up ominously and swept through to catch his rival in the home straight and provide yet another winner for Charlie and Fran Poste. 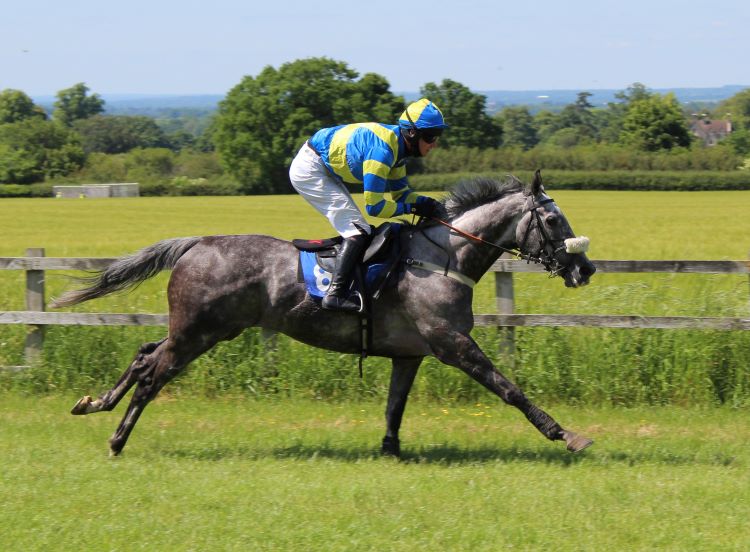 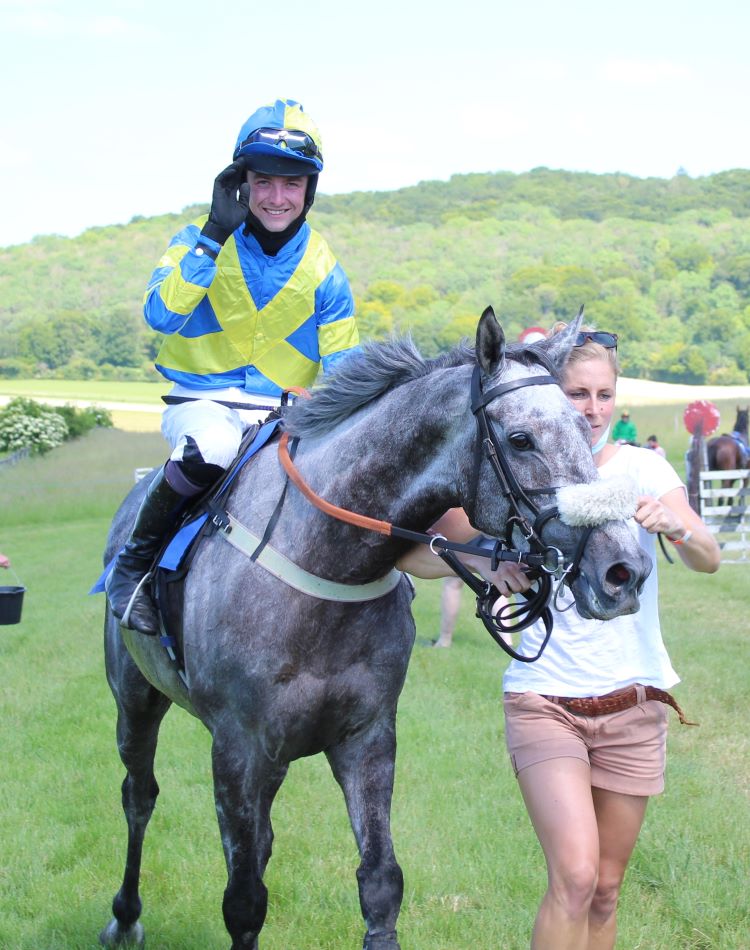 Experience is worth its weight in gold in Novice Riders races and that proved the case on Sunday afternoon. Kaitlin Perks was bidding for her first winner on Grageelagh Girl and they looked in complete control having established a 10-length lead bypassing the fourth from home.

Everything pointed to another victory for the Hannah Lewis trained mare who still had a healthy advantage at the second from home, but turning for home Ben Sutton and Rolling Dylan began to loom up into the leader’s wing mirrors.

After her earlier exertions Grageelagh Girl had nothing more to give when Sutton produced his mount with impeccable timing to claim the lead at the last.

Earlier in the afternoon Sutton had drawn level with Conor Houlihan in their battle for the Novice Riders Title by taking the Men’s Open with Sir Mangan, a victory which secured connections with the Connolly’s RED MILLS Champion Horse Award. Sutton later completed his first treble on his father’s home bred mare Festival Dawn in the Maiden. 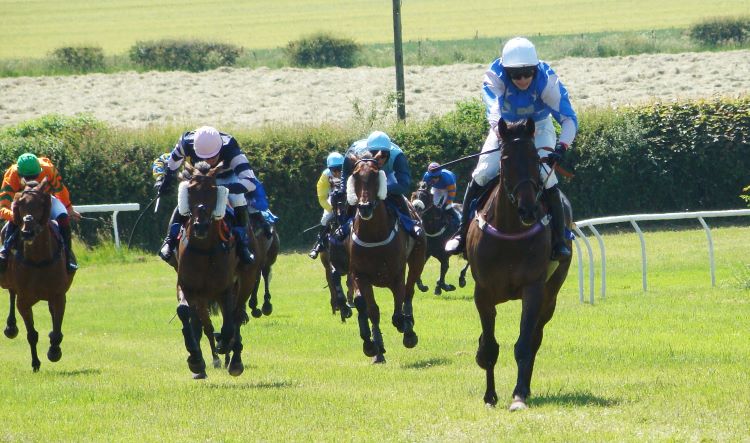 Sir Mangan leads The Brassmoulder around the final obstacle

Sutton’s win on Sir Mangan came at the expense of The Brassmoulder and Cheltenham de Vaige whose effort petered out over the final three fences, and he has obviously benefitted from his association with Alan Hill’s stable because his riding has improved throughout the season.

Cheltenham de Vaige’s owners Matt and Sally Burford were represented by Barney Dwan in the Ladies Open, but after disputing the lead with Killiney Court from halfway these two horses were swallowed up by the eventual winner Blazing Tom and Hawkhurst at the penultimate 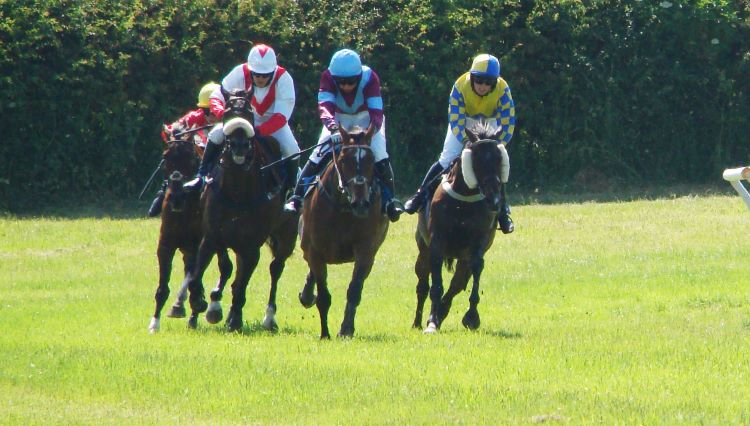 The final bend in the Ladies, Barney Dwan (right) is caught by Blazing Tom, while Killiney Court (red and white) is hanging on grimly, with Hawkhurst being produced for a late run 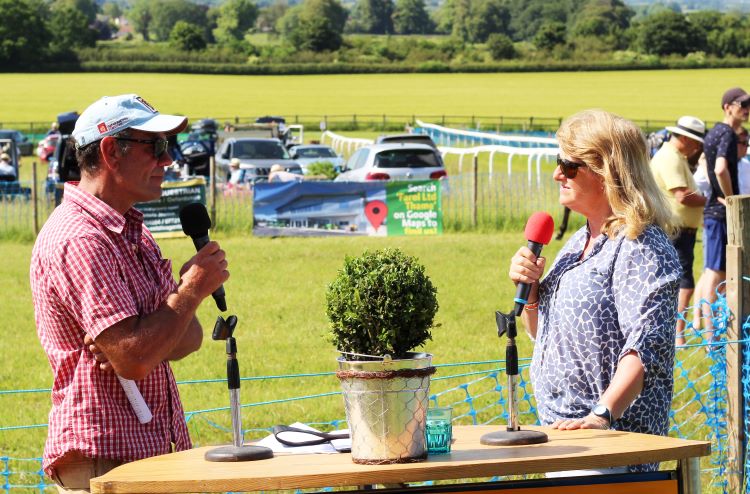