After years of time, money and effort the Croome & West Warwickshire staged their first meeting at Shelfield Park on Sunday afternoon.

While surrounding areas received copious amounts of rain throughout Friday and Saturday, it frustratingly avoided this part of Warwickshire so despite the organiser’s best efforts and continuous spiking throughout Saturday, conditions were on the firm side of good. 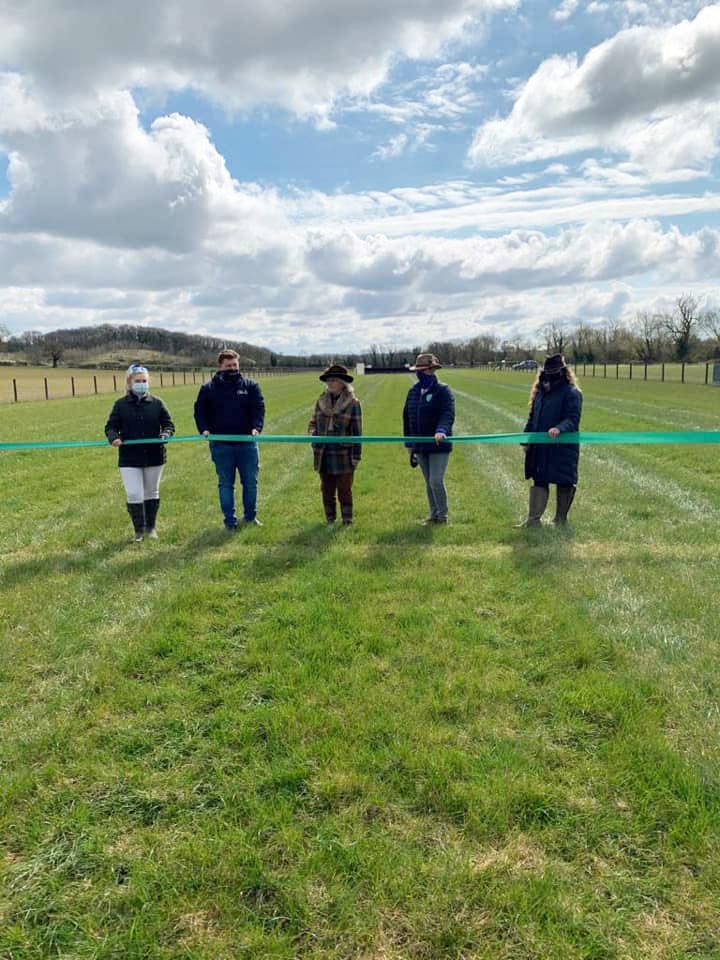 The new course is officially opened by Patty Allen (centre)

Despite the small fields, there was universal agreement from owners, trainers, jockeys and the general public that everyone involved with the course’s creation can be proud of what they have achieved thus far and what they will achieve in the future.

The course was level and fair and rode well according to all the participants. Due to a combination of circumstances this year’s meeting was held 3 weeks later than originally advertised, but will be seen at its best if the organisers stick to their original mid-March date.

Three horses lined up for the Members and the honour of winning the first race at Shelfield Park went to James King and Master Sunrise who proved worthy winners.

They set a strong pace throughout but could never shake off the attentions of the outsider State of Origin who led briefly going down the back straight for the final time. 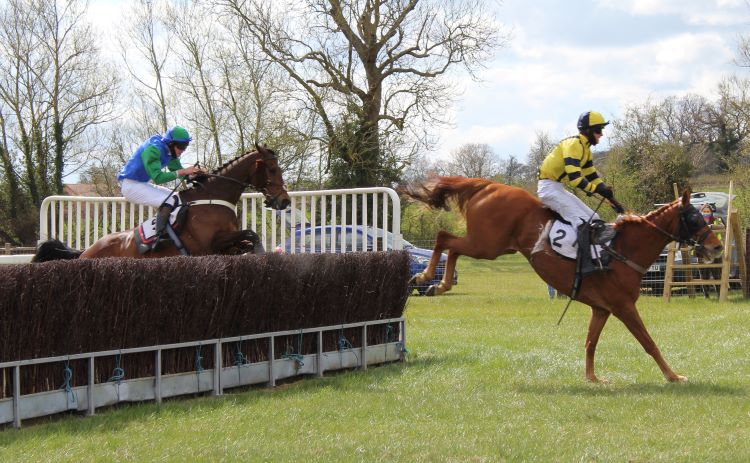 Master Sunrise secured the inside berth around the final bend and outjumped his rival to regain the advantage at the second from home before staying on resolutely to win by 3-lengths.

The winner races in the colours of Malvern owner Mervyn Jones and is sponsored by his company Beacon Fuels. The 12-year-old had form under Rules for Alistair Ralph’s Bridgnorth stable but is now in the care of his head lad Callum Griffiths for whom this was an initial training success. 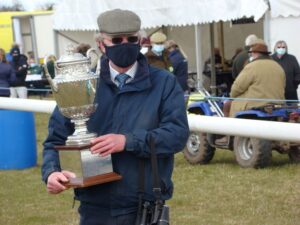 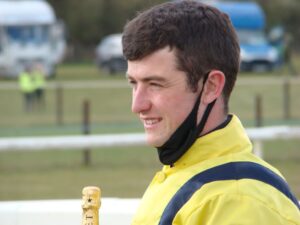 This crowned a good 7 days for King. He trained his first winner the previous weekend, rode Cousin Pascal to victory in the Aintree Foxhunters on Thursday, and followed that with a double at Mollington on Saturday afternoon.

“He was caught a little flatfooted when we sprinted downhill to the final bend, but I know he stays and he found another gear when we straightened up. This is a really nice, fair galloping track but will probably be best early in the season. They have done a brilliant job and the fences are nicely positioned” stated the rider afterwards.

With this win and a second and third latter in the afternoon, King is now hot on the heels of the reigning Area Champion Alex Edwards who has now turned professional. With two meetings remaining King has a good chance of securing the required number of points to secure his first Area Title, while rivals Tommie O’Brien and Zac Baker have a lot of ground to make up.

Jason Warner has enjoyed a purple patch in recent weeks and with Moorcroft and Price’s help they took the concluding 2-1/2 mile Maiden with Finley’s Eyes.

Leading owners Paul and Clare Rooney have cut down on their commitments in recent years and Warner has been able to acquire some of their lesser lights via his friendship with Jason Macguire.

Finley’s Eyes was placed several times under Rules for local trainer Dan Skelton when last seen out in June 2019. He had the habit of making the running under Rules so Moorcroft repeated these tactics but the partnership did well to remain intact after ploughing through the 9th 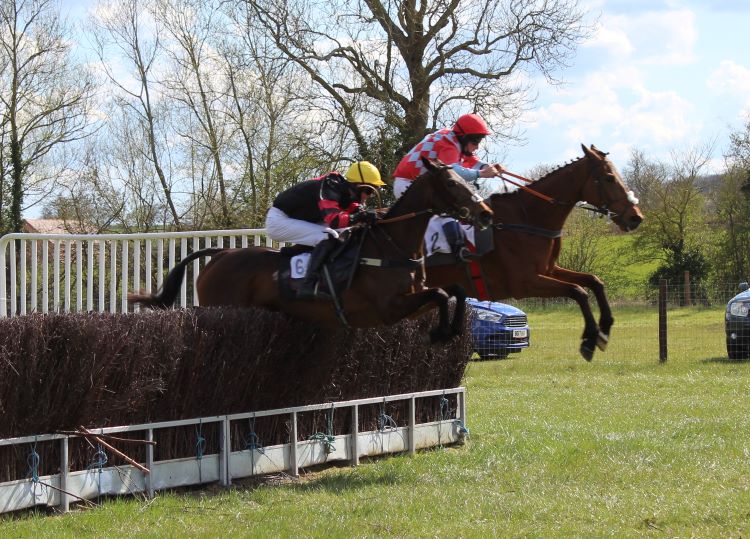 Keen to avoid another error the jockey saw a good stride at the next and fired his mount at it. While Finley’s Eyes jumping was far from foot perfect it was certainly far better than Rose Iland whose jumping was best described as slovenly. 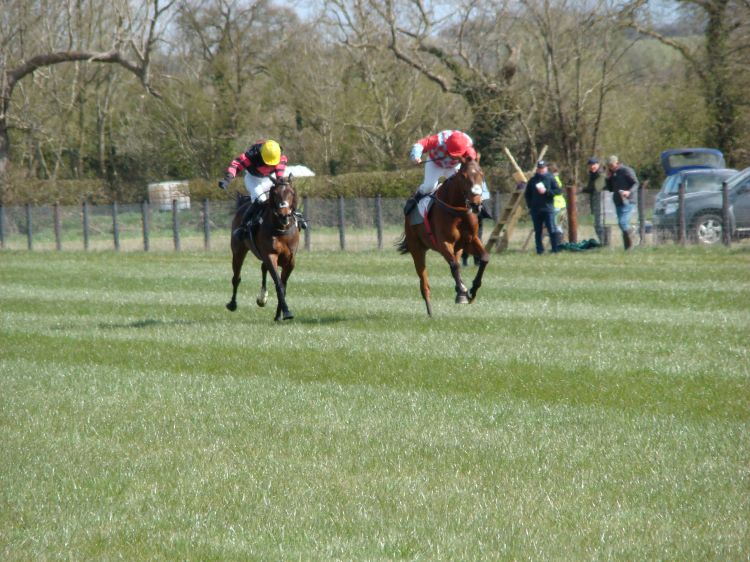 Finley’s Eyes begins to draw clear on the flat

Moorcroft kicked on into a 3-length lead around the final bend, but then handed the advantage to his rival by running wide into the home straight, while James King stuck like a limpet to the inside rail.

Finley’s Eyes fought back and was on level terms as they jumped the penultimate before taking his rivals measure approaching the last and claiming a deserved success.

Alice Stevens was brought up in the Croome country so received a rousing cheer after Summer Sounds success in the Skinners sponsored Ladies Open.

The 12-year-old set off in front and was never headed although he fluffed his lines on two occasions at the open ditch after the finish, which the rider attributed to its proximity to the horseboxes. He had to be given a wakeup call after his second mistake but after that reminder he drew right away from his solitary rival Theatre Evening. 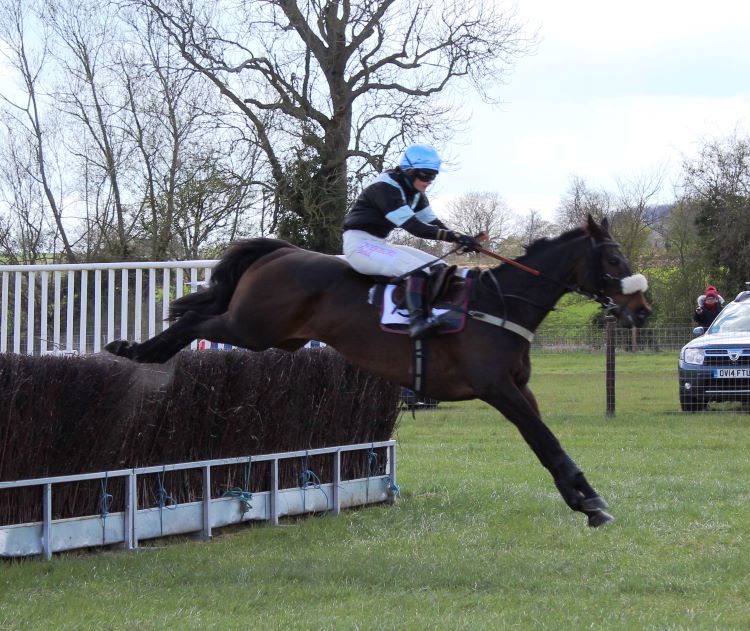 Two runners contested the Conditions, with After Hours content to give a lead to his rival, but in the home straight he was able to dismiss Donjon’s challenge and provide 21-year-old Toby Steel with his 1st winner and the T.C.E.H. Novice Ride of the Day. 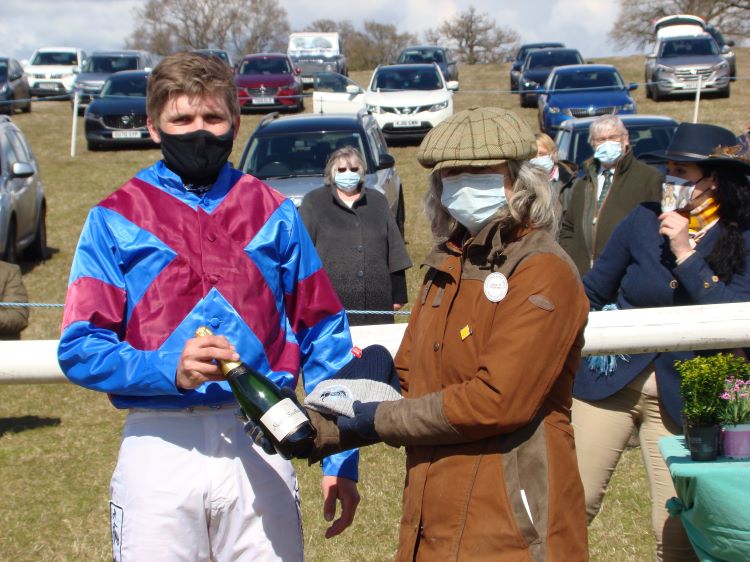 Grand National winning trainer Venetia Williams, the owner of Nesterenko was on hand to see Flora Glover have her first ride in the Novice Riders. There was a ragged start to this race which was accentuated by the fast pace set by Spring Cover and Ardview Boy.

Argot took over on the final bend and lining up for the judge Lewis Dobbs kicked Argot into a clear lead and they quickly established a winning advantage over Nesterenko who stayed on strongly in the closing stages. His rider should be able to put this experience to good use in the future.

The 2-1/2 mile Print Concern Restricted went as expected to the favourite Bold Gesture, but it was no means as clearer victory as the market predicted.

Turning back towards home, Bold Gesture held a two-length advantage over Cotton Rock, while Mykonos Ammos who had been outpaced a fence earlier was by no means out of it, when Noah Brazg encountered saddlery problems at the penultimate obstacle.