Premier Magic was an emphatic winner of Pinfields sponsored The Lady Dudley Cup at Chaddesley Corbett on Saturday afternoon, to add to Bradley Gibbs’s expanding C.V. and his double now puts him hot on the heels of the leaders in the Riders Championship.

The 8-year-old caused a major surprise at the Wheatland by beating Wishing and Hoping and showed that was no fluke by landing a Leicester Hunter Chase on his next appearance.

Based on those performances he was entitled to start favourite, but there was also support for Igor (9/4), with recent Fakenham winner Ennistown (5/2) and Magna Sam (3/1).

The field remained tightly bunched for the first circuit which indicated a modest pace set by Bob Ford, Itstimeforapint and Sir Antony Brown and the tempo did not change until Igor and Sam Waley Cohen took charge in the back straight.

Their injection of pace resulted in Igor holding a slender advantage over Premier Magic, while Ennistown made progress into third.

Racing uphill towards the third from home Premier Magic had galloped his way to the front and was able to extend his lead around the final bend, while Igor challenge began to peter out and Ennistown’s efforts were beginning to hit the buffers.

Premier Magic quickened again to open up a race winning lead passing the 3-mile start and extended his advantage over the final two fences while Ennistown got the better of a protracted battle with Igor to claim the runners up spot. 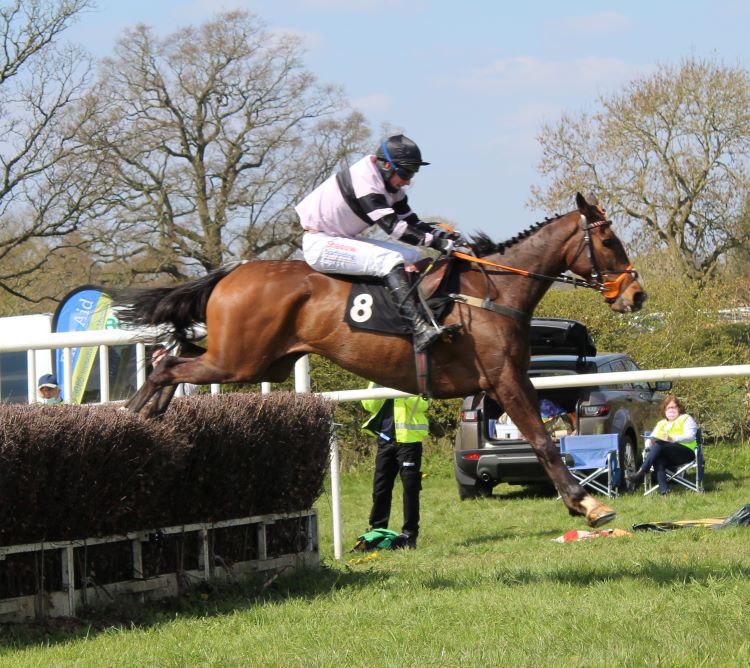 Premier Magic and Bradley Gibbs at the last

The winner races under a Glamorgan certificate but in fact the trophy ended up going in the opposite direction as Gibbs and his partner Claire Sheriff are now based at her father’s Julian farm at Hatfield, near Welwyn Garden City. 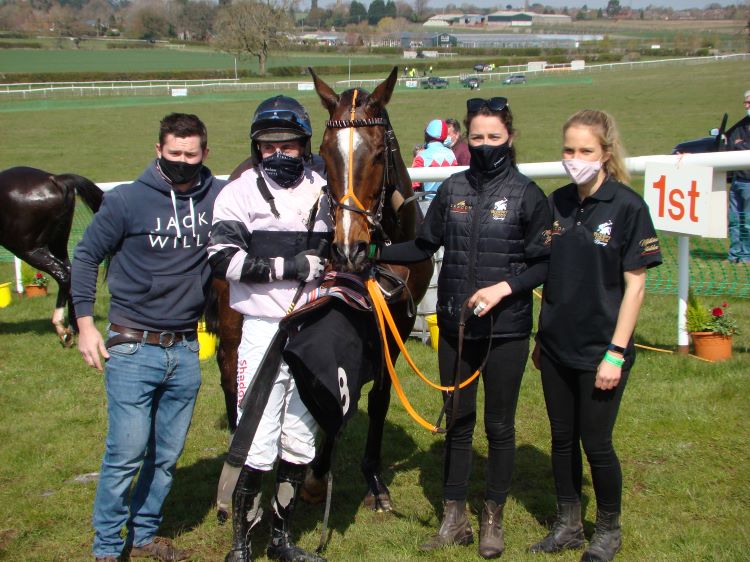 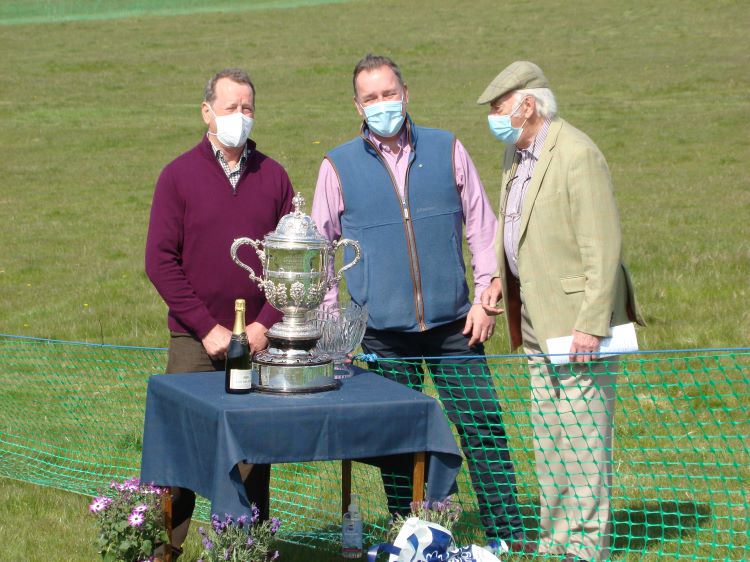 Winning connections and Julian Sheriff and the big race trophy

That move has obviously had a beneficial effect as recent results speak for themselves and Gibbs went on to complete a double when Post No Bills scored an emphatic win in the 3-mile Maiden as the expense of Jim Collett’s Rose Iland who was placed yet again.

Alex Edwards was well on his way to landing a fourth consecutive Area Championship as he built up an almost unassailable lead during the early part of the season, before the Covid Lockdown accelerated his plans to turn professional.

Since the restart James King has slowly chipped away at his lead and victory on Dondiam means the Ettington based jockey now leads in the Title race and is poised to take over as the new West Midland Area Champion.

King has had a phenomenal strike rate (both Nationally and locally) over the last two weeks and now has one hand on the trophy and with just one meeting remaining his rivals will struggle to close the gap.

Most of Edwards early season successes were provided by Mel Rowley who was on board when the Morville based trainer recorded her first success under Rules when The Player Queen won a Cheltenham Bumper last week. The winner incidentally had opened his account in a Maisemore Maiden at the end of the October.

Reports emanating from Fran Nimmo’s yard suggested that the French bred 4-year-old Dondiam was a potential star and those opinions were justified when he jumped the early fences in the 2-1/2 mile Maiden like an experienced campaigner.

There was little change until the field turned uphill towards the third from home, where Dondiam, Whotheman and Between You and Me inched clear of their rivals.

Straightening up for home, the favourite lengthened his stride and saw off the challenges of Whotheman who had to settle second place when Between You and Me weakened back into third. 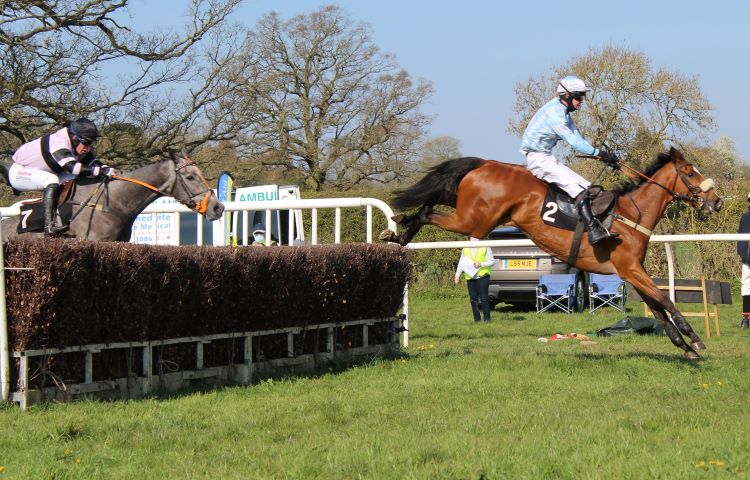 The winning trainer praised the course’s preparation “They have done an amazing job with the ground which is very consistent. We always thought this horse was the best of ours and James gave him a positive ride. He said he was running around a bit at the finish, and is now off to the Sales”. 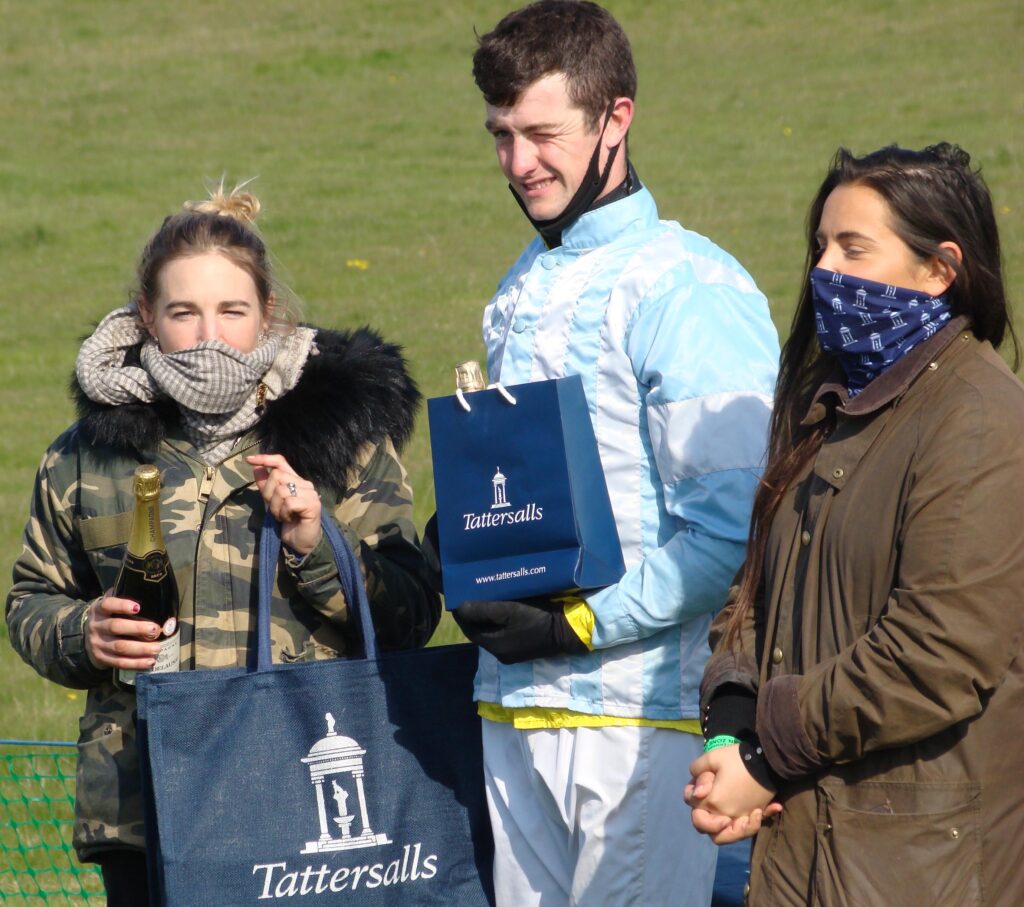 Ravished had beaten Southfield Theatre when the pair met at Kimble back in November, but their fortunes have gone in opposite directions since then which made for an interesting clash when they renewed rivalry in the Skinners sponsored Ladies Open.

While the favourite languished in mid field Lilly Bradstock adopted her customary front running tactics and the winner put in one of the best performances of his long career. Dictating the pace of the race from the start, the partnership soared over their fences like Pegasus and gave a performance that will live long in their supporters’ memories.

Son of Presenting attempted to match strides with Lilly Bradstock’s mount but was a spent force by halfway while Bandsman early efforts left him with little petrol in the tank when the pace quickened again in the final mile.

Southfield Theatre held a narrow advantage as they turned up the final hill where Shometheway and Chu Chu Percy both looked dangerous. 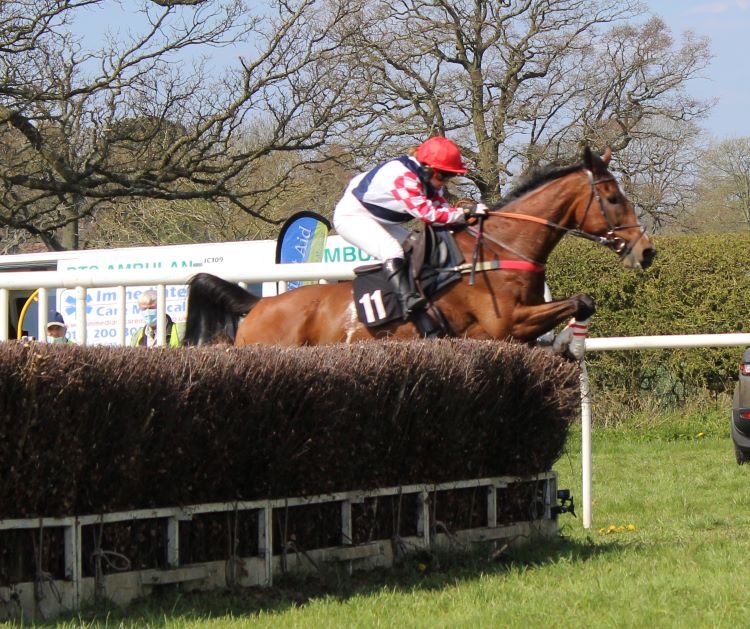 Poetry in motion – Lilly Bradstock and Southfield Theatre at the last

Once in the home straight Southfield Theatre and Shometheway quickly drew clear of their remaining rivals and momentarily it looked as though Hannah Lewis’s mount had timed his run perfectly, but that challenge disappeared in the blink of an eye with the leader throwing in more prodigious leaps over the final two fences to crown a brilliant and breath-taking front running performance.

Ballyboker Breeze side stepped an engagement in the Dudley Cup in favour of a tilt at the 2-1/2 mile Conditions.

The odds-on favourite had established an early lead when successful at Maisemore where he was able to jump his rivals into submission but could not get to the front due to the strong early pace set by Graasten and Sambremont.

Ballyboker Breeze took the lead at the fourth from home where he had Tom McClorey’s mount Early Retirement for company. The race developed into a match which went Early Retirement’s way as he had gone clear entering the home straight and Zac Baker’s mount struggled to close the gap over the final two fences.

Winning trainer Gerald Bailey explained “That’s four winners from our last four runners. He was travelling well and I thought he was unlucky at Dingley”. Baily trains the horse for a quartet of owners which includes his wife Caroline, David Docker, John Sharp and Alex Vaughn Jones.

Reigning National Ladies Champion Gina Andrews was seen at her best when taking Division II of the Conditions with Deans Road and the 4 & 5 year old Flat Race with the Ledbury qualified If I Say.

West Midland runners made bold bids to keep prize money in local hands but they kept missing the target.

This fate awaited Gabriel the Great in Division II of the Conditions. Tom Murrays mount led at halfway but was being challenged by Deans Road and Hotel du Nord at the third from home and once Deans Road hit the front their rivals’ efforts petered out. 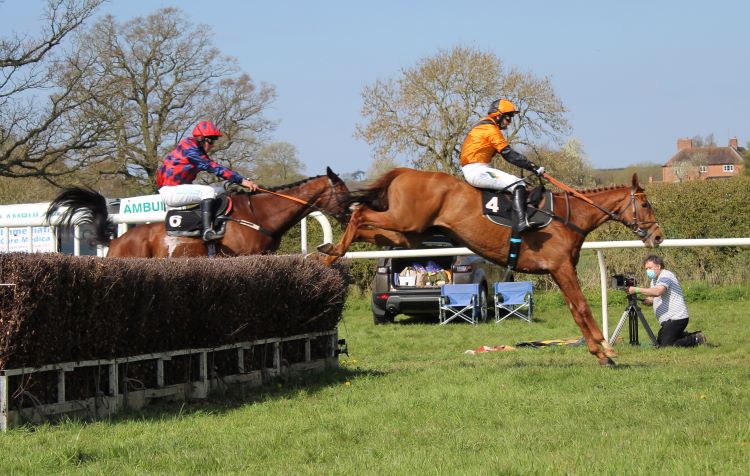 Gina Andrews and Deans Road on their way to victory

This continued the fine run for Tom Ellis’s Warwickshire stable who had 12 winners from 17 runners during the sports first week back after the Covid lockdown.

As predicted the Members went to a runner carrying blue and cerise hoop colours, it was not all plain sailing as the favourite Diamond King caused problems at the start and Abi Banks did well to maintain the partnership after her mount ploughed through the first open ditch.

Early leader Bon Jette weakened after a circuit, with Diamond King and Silvergrove vying for the lead until the former stormed clear in the final half mile. 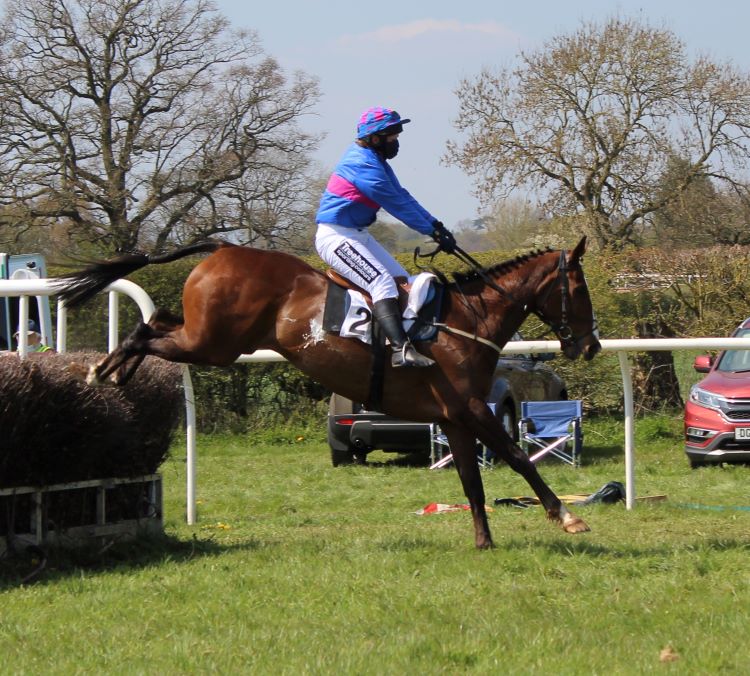 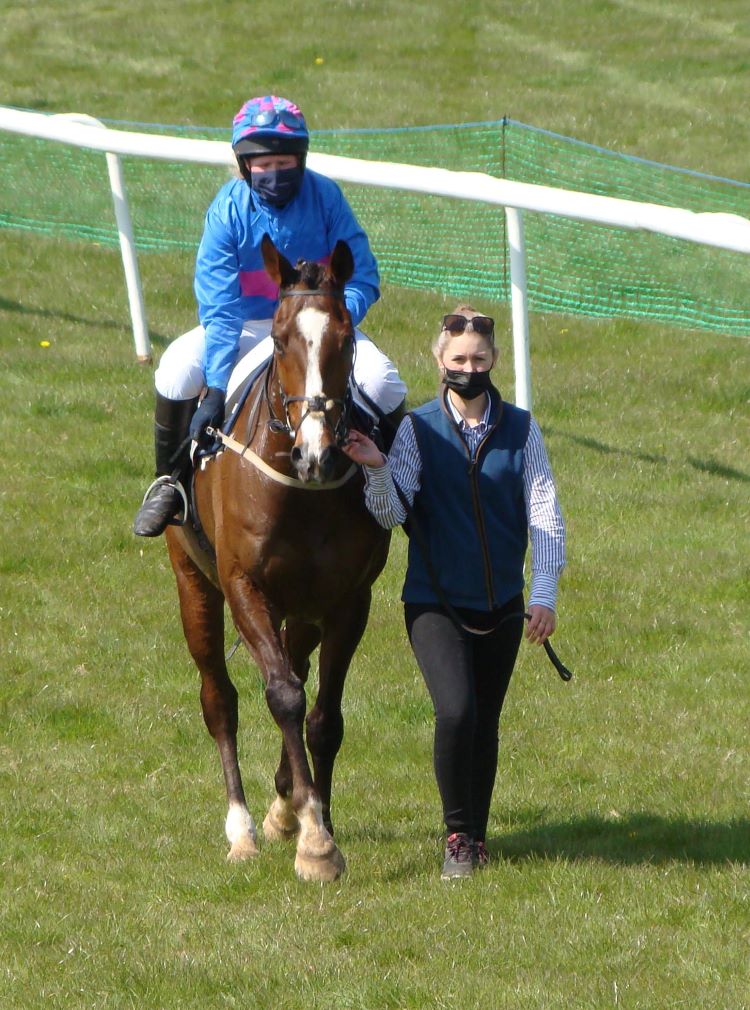 Before the race all things pointed towards If I Say in the 4 & 5 year old Flat Race. The combination of owner David Redvers, trainer David Dennis and jockey Gina Andrews suggested the 4-year-old daughter of Free Eagle had a lot of things in her favour.

She was given a patient and educational ride with the rider content to let others cut out the donkey work before they made significant progress to go from 7th at the end of the back straight and into third on the home turn.

Andrews switched her mount to the inside on the downhill run into the straight and drew level with Time Bandit and He’s My Shadow passing the second from home. 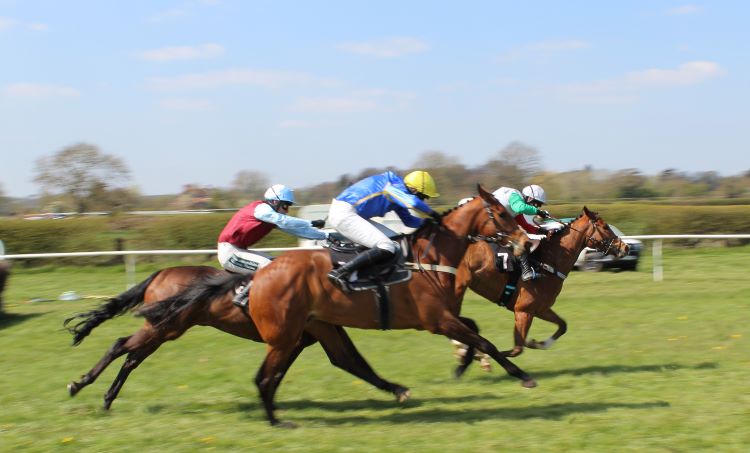 If I Say swoops late to claim the flat race

The 4-year-old showed signs of greenness when she hit the front but gradually increased her advantage racing towards the judge and eventually prevailed by a length and a half. 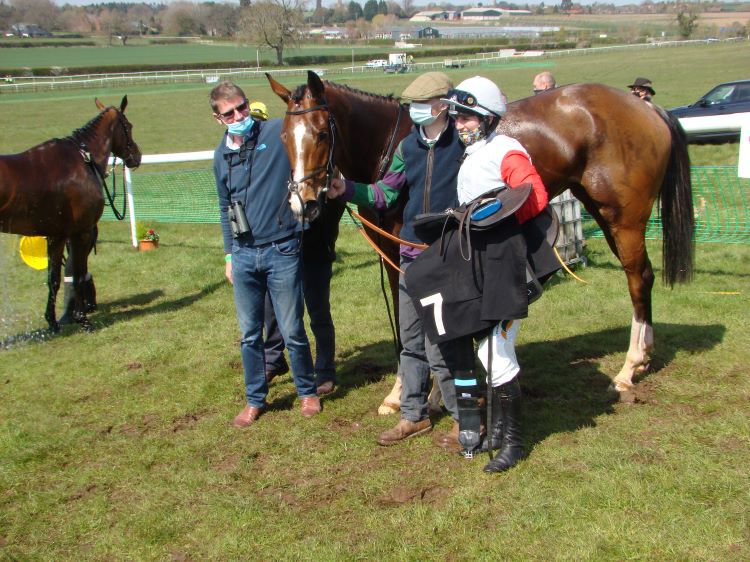 More used to Ascot but at home at Chaddesley, David Redvers (left) greets his winner 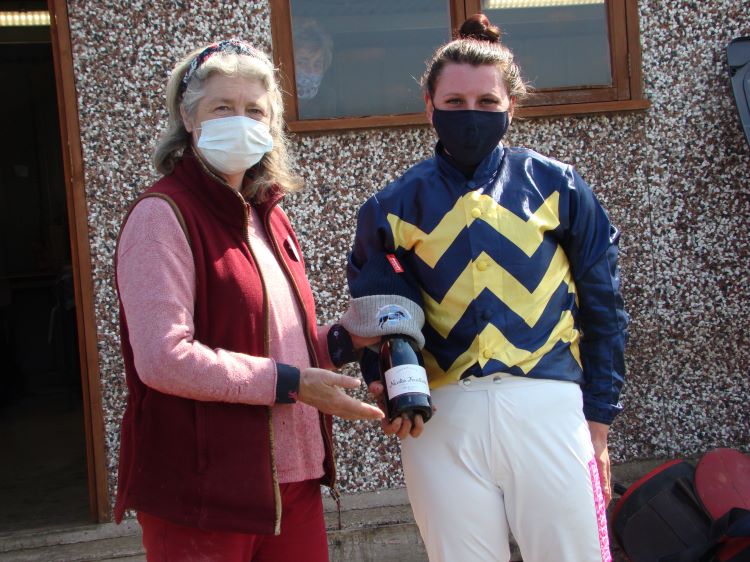