Jason Warner has been involved with the sport as an owner/jockey/trainer and administrator for longer than he cares to remember, but he cannot recall a period that will match his run of success over the last seven days.

His colours have been seen at Charing, Maisemore, Higham, Sandon and Dingley since the sport resumed last Monday and there was no indication of what was to come as the Gloucester based owner left the first two meetings empty handed.

The tide turned with a double at Higham on Friday afternoon, another winner less than 24 hours later during the North Staffordshire meeting at Sandon before finally causing one of the biggest upsets of the season at Dingley on Monday.

“Keep yourself in the best company and your horses in the worst” is an old racing adage but one which Warner is comfortable with as he explained after French Piece had completed his hattrick following wins in a Pyle Maiden and a Llwyn Du Restricted in 2019.

“He was ready to run last year but needs good ground and then Covid struck”, Warner said later.  “He came to me from David Bridgwater about three years ago. He was very immature but Luke Price has done a good job with him and he will come on for the run. He is not the easiest horse and that is why we do not have him at home. I am not sure how long this run will last, but we will enjoy it while we can”.

The winner made the running until going a couple of lengths clear of Donjon with a circuit to jump. Byron Moorcroft quickened the pace down the back straight and the partnership had more than doubled their advantage as they turned back towards home. 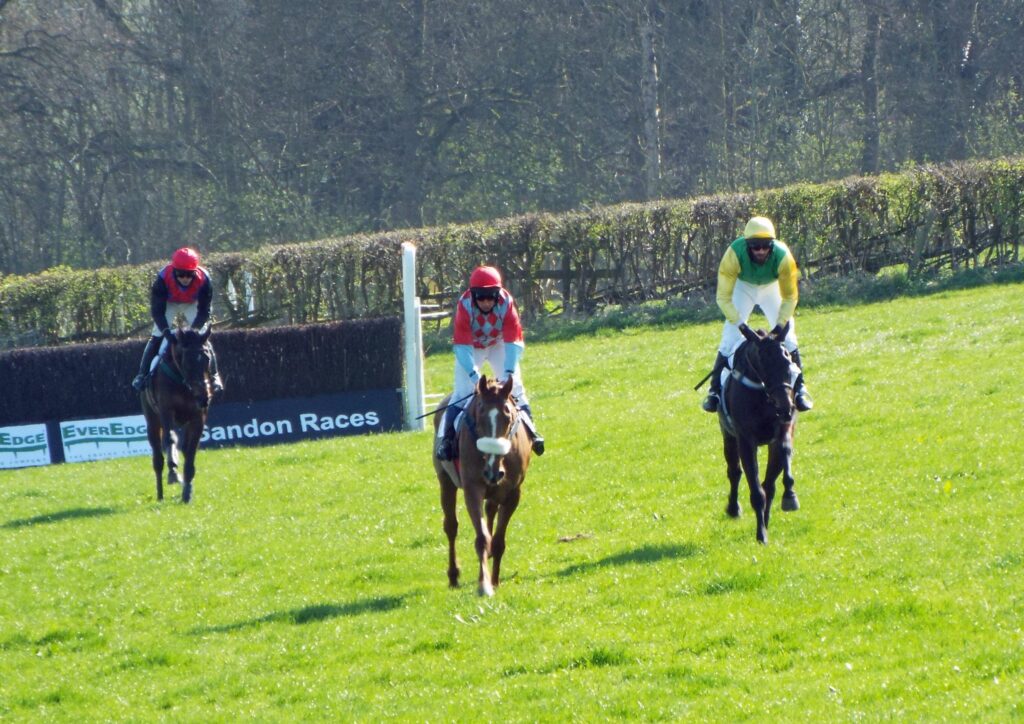 Donjon tried his best on the climb to the second from home but French Piece had the race in his pocket despite running down the final obstacle. 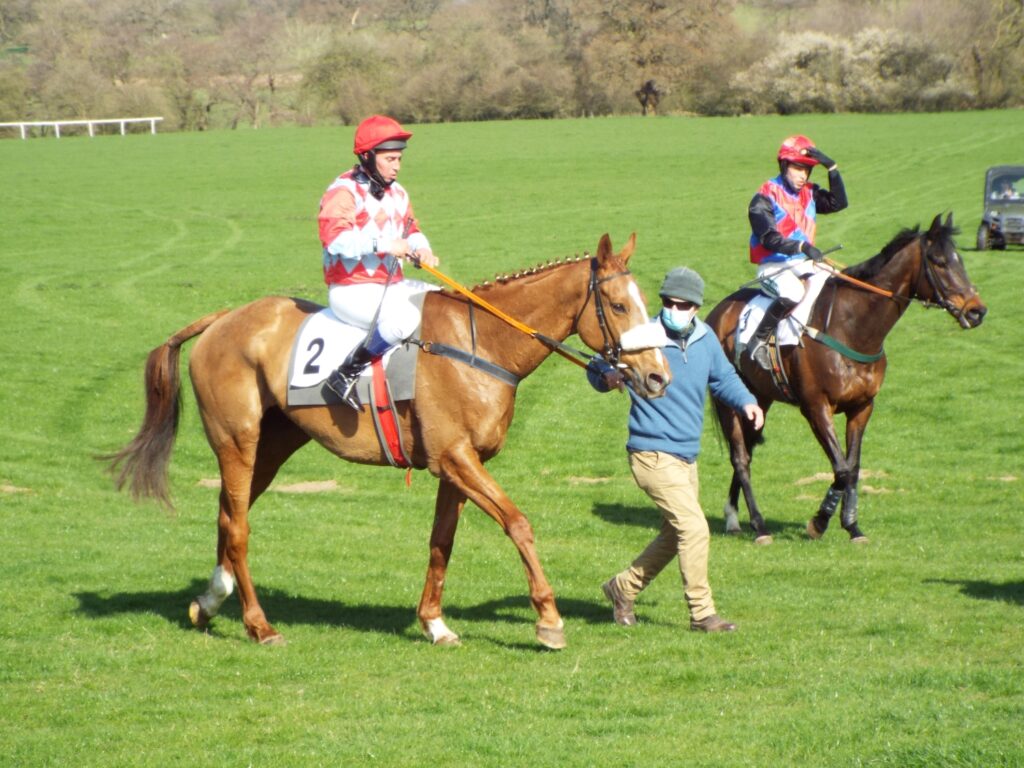 John Smith Maxwell was rewarded for an enterprising ride on Sausalito Sunrise in the Conditions. Duke of Acardio was an early casualty, after which Optimised held a narrow lead over Emerald Chieftain while Smith Maxwell was biding his time in third.

The jockey surprised his rivals by sneaking through on the inner at the entrance to the back straight and before they had time to respond he kicked his mount into a clear lead and held a 6-length advantage turning back towards home.

The opposition struggled to reduce the deficit on the climb to two out which allowed the leader to stroll home for an emphatic win. 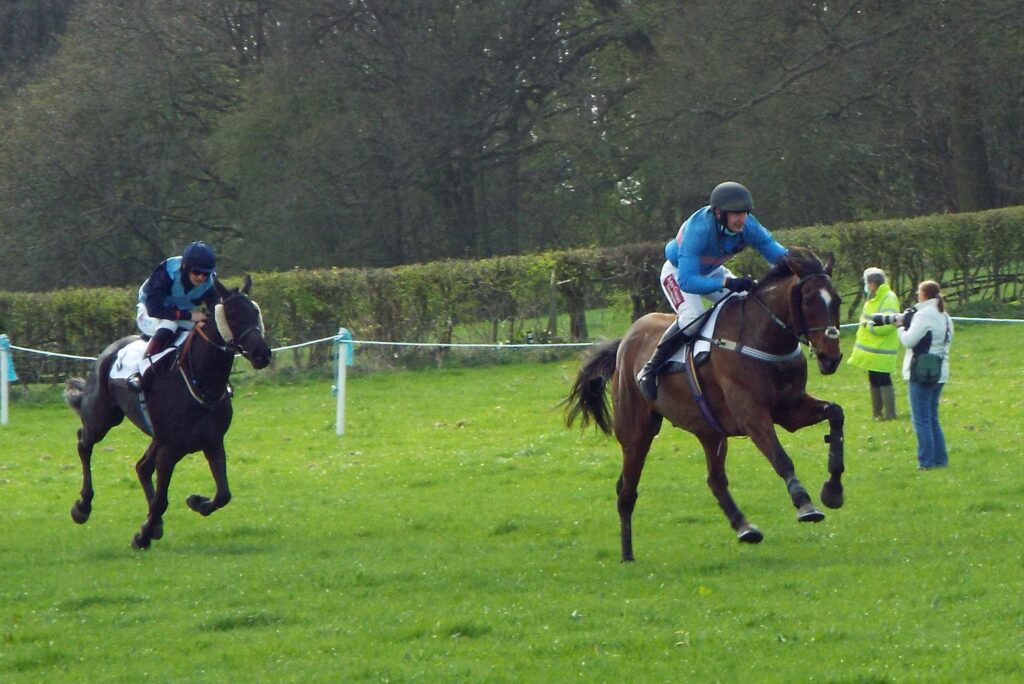 Owner Katherine Smith Maxwell lavished praise on the course “It is a joy to come here, the ground is exceptional. John had not been here before but watched some old videos of the races and he said this is the way I am going to ride it. The horse is ground dependent so that will dictate his next outing”

Joe O’Shea and Henry Crow had already taken the Members with Irish Anthem when they teamed up with Williewonga in the Maiden, where they vied for favouritism with the Diana Williams owned and Phil Rowley trained Forest Chimes.

With no one willing to take the initiative the race did not develop in earnest until the runners turned into the home straight. As they met the rising ground Forest Chimes and Williewonga began to dominate and were in-separable approaching the last, but Williewonga gained a narrow advantage which he maintained all the way to the line. 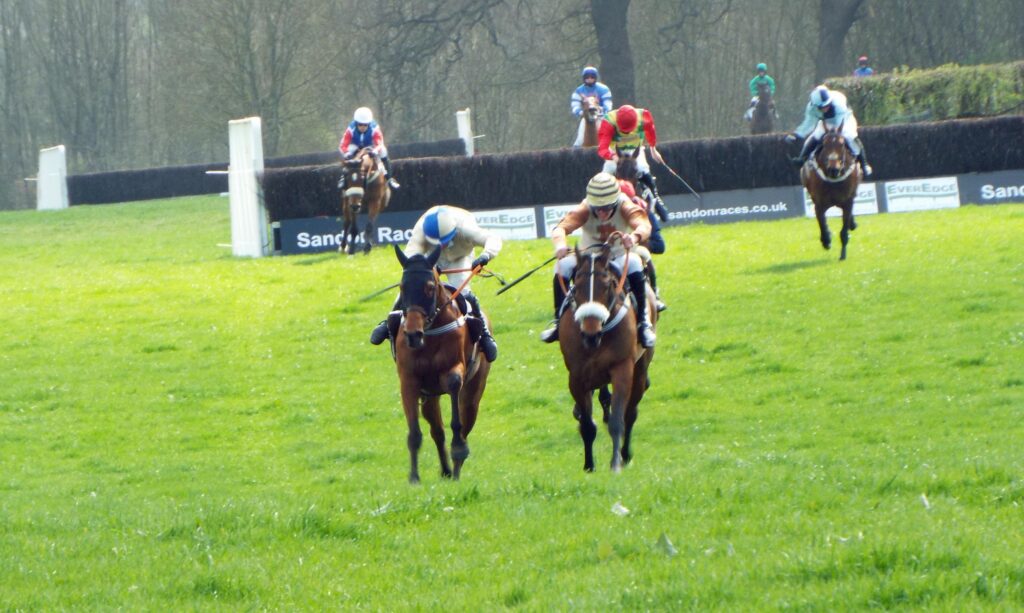 Forest Chimes jockey Ed Glassonbury told connections later “I thought I was going to win three out but I just could not catch the winner”. Honours were probably even as the runner up was conceding 4 lbs to his rival.

The latter’s trainer Phil Rowley gained some compensation in the final race, the 4-5-&-6-year-old Flat Race.

Another Brown Bear set a modest pace with none of the runners playing their cards until the final half mile.

Arcandy, Snowy Cloud and Another Brown Bear drew clear turning for home and as the former dropped away the two leaders settled down to fight out the finish.

Both battled bravely in the final furlong and neither was willing to concede defeat. They were locked together passing the judge who could not separate them and awarded a dead heat.

The former had come down from the North of England while Another Brown Bear did have some racecourse experience having finished last of four in a similar event at Chaddesley before Christmas.

As the name suggests the Wheatland qualified gelding is another in the long list of George Barlow owned horses to carry the “Bear” suffix.

As well as training himself Warner has horses based with others including Thumbstone Blues who is with James King. The 11-year-old won on the heavy at Cothelstone in 2020 but was not inconvenienced by firmer conditions when he became the first leg of a double for Gloucester owner in the Essex and Suffolk Veterans race at Higham.

He was prominent throughout before leading at the 13th and had his rivals measure approaching the penultimate and had no difficulty holding the challenge of the favourite Mercers Court from that point.

Connections struck again in the Maiden, with Warner listed as the trainer of Ahead of the Game.

King was content to bide his time on the ex-Paul and Claire Rooney gelding but after leading at the 15th went away to score easily by 12-lengths.

Seven runners lined up for the start of the Higham Maiden which was won in impressive style by the Max Young owned and trained Takoda.

The Droitwich trainer cut his teeth in West Midland Area Point-to-Points before taking out a Rules licence in 2020 and the performance by this 5-year-old son of Doyen was deemed the best of the day.

Tristam Durrell sent the Radnor and West Herefordshire qualified gelding into the lead at the 14th and they went on to score impressively.

Warner seemed to ignore his own advice as he chose to take on the “red hot favourite” Fumet D’Oudairies in the 2-1/2 mile Mixed Open at Dingley. That policy paid off when Always Lion made it four wins from four runners for the owner when James King’s mount brought off one of the biggest upsets of the season.

All seemed to be going to plan for Andrews’s mount as Always Lion tracked the long-time leader Knockoutloaded before taking over the baton approaching four out, while Andrew’s was waiting to deliver his challenge.

Passing the three-mile start Fumet D’Oudairies had to be driven to maintain contact with his rival, who had secured the vital inside berth around the final bend.

They challenged again approaching the final obstacle but Always Lion was quicker away and inched clear as his rival’s effort petered out in the final 50 yards, with Andrews explaining “the horse did not like the ground”.

As well as being the winning jockey, James King is also the trainer and he went on to explain “The horse has only had 10 runs in his life. He missed 2016 and 2018 and there were no obvious excuses for the runner up. Although he is 11-year-old he is still learning and he had run well at Larkhill earlier in the year”

“I am friendly with Jason McGuire and he helped me acquire the horse” Warner stated in the winner’s enclosure “I knew about Always Lion when he won his bumper for Brendan Powell but as his record shows he is fragile so will not run on firm ground”.

Long Mile Road (pulled up) and Edabean (2nd in Mares Maiden) failed to add to the owner’s tally, but this week will live long in his memory.