The Dellercheckout’s connections are dreaming of Cheltenham after the 6-year-olds success in the Mixed Open during the International meeting at Barbury Racecourse on Sunday afternoon.

Immy Robinson’s mount was settled in mid-field as Dunsmore winner Don Bersy set a strong pace and still held a 3-length advantage negotiating the 14th, but Optimised and Tossapenny were both on the leader’s heels, while Robinson was poised to deliver her challenge.

2 out and it is impossible to split The Dellercheckout (red cap) and Don Bersy (blue and white), Optimised (left) and Tossapenny in the Rucker colours are chasing them home

She did so around the final bend producing the Albrighton & Woodland qualified gelding to head her rival before Don Bersy fought back to get on level terms at the final obstacle, but Robinson’s mount proved the stronger on the run to the line. 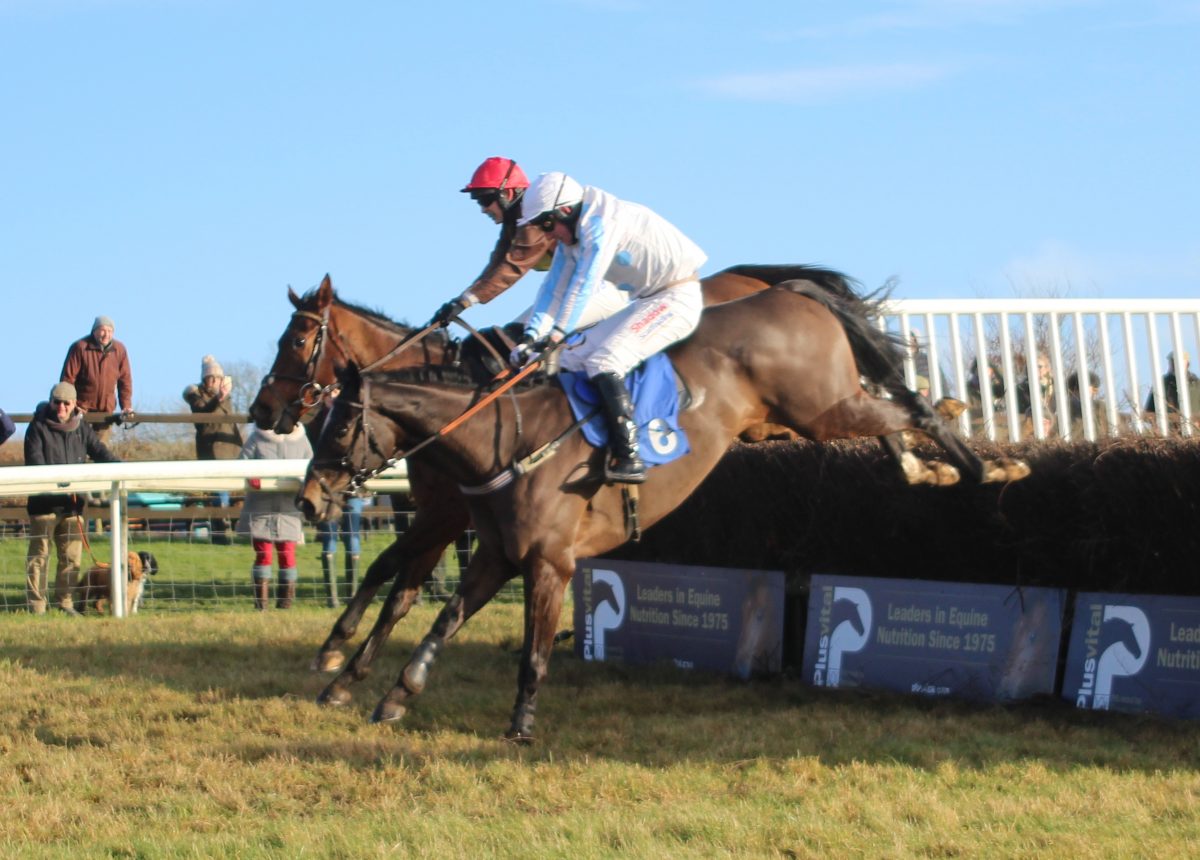 The Dellercheckout was purchased for £260,000 after winning an Irish Point-to-Point as a 4-year-old but subsequent performances led to him being purchased by Sheriffhales trainer Caroline Robinson for a tenth of that cost at Goffs in May this year.

“I thought he looked a nice horse as he walked round. Immy did not want to be in front too soon so kept him in company for most of the race. It has always been my dream to have a runner in the Cheltenham Foxhunters (a race she won herself as a rider on Eliogarty in 1986), but I realise these can be shattered so we will take it step by step and see where it takes us. He does everything so easily at home”.

Don Bersy’s trainer Ryan Potter had to settle for another runners up spot when Sam Brown and Little Windmill were beaten by Trojan Star in Division I of the Novice Riders.

The front running Summer Sounds set a strong pace but paid the penalty by weakening out of contention over the final three fences, whereas Little Windmill made a couple of minor mistakes but still seemed to be travelling easily behind the leaders on the final turn.

Trojan Star swept around the outside approaching 2 out to put the issue beyond doubt although Little Windmill did stay on doggedly to claim second spot. 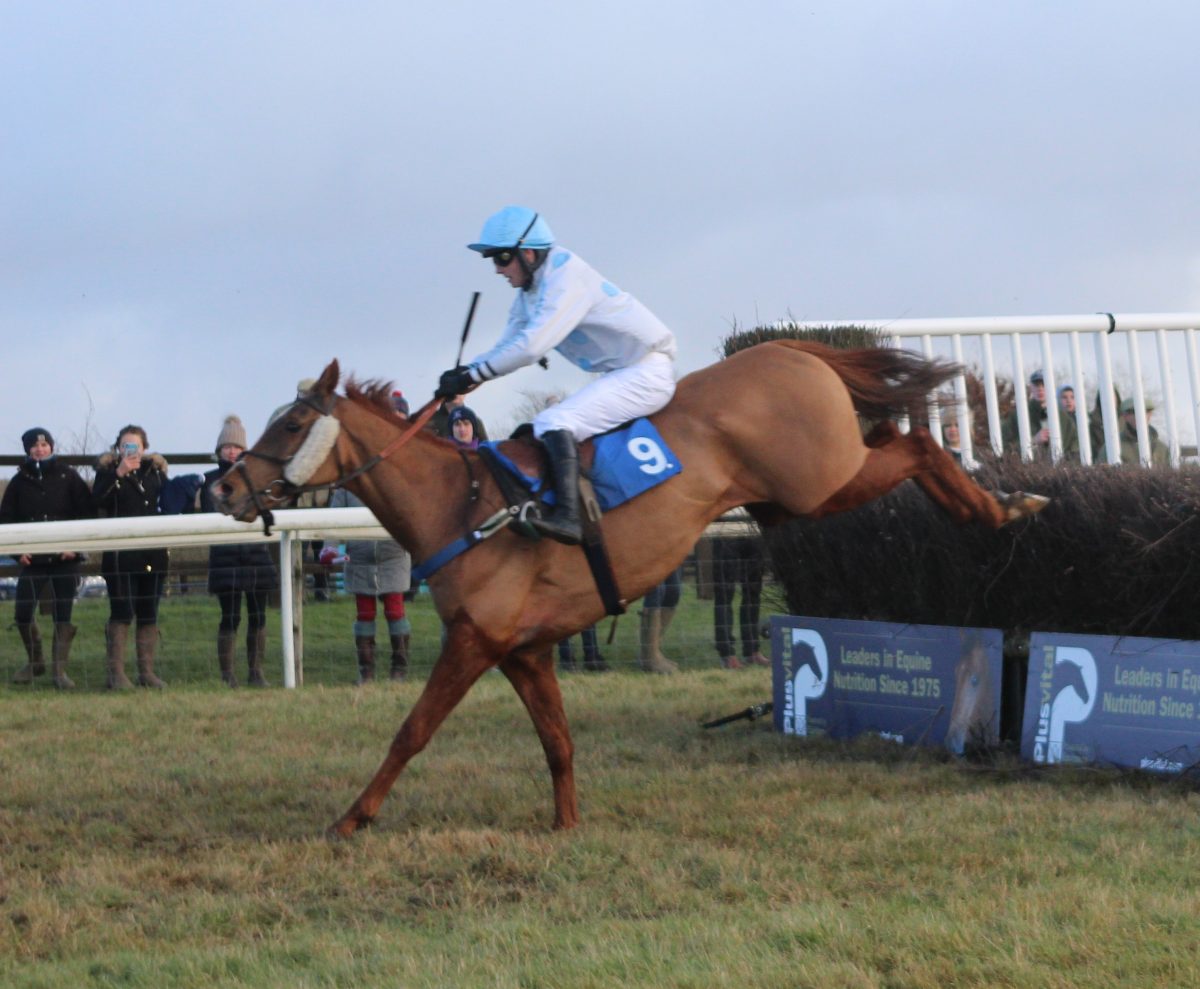 Potter’s perseverance finally paid off in the final race on the card after Family Man and Bradley Gibbs had taken the Open Maiden.

Jason Warner’s Best to Come was the subject of heavy support and the jockey’s tactics were obvious as they shot into an early lead. 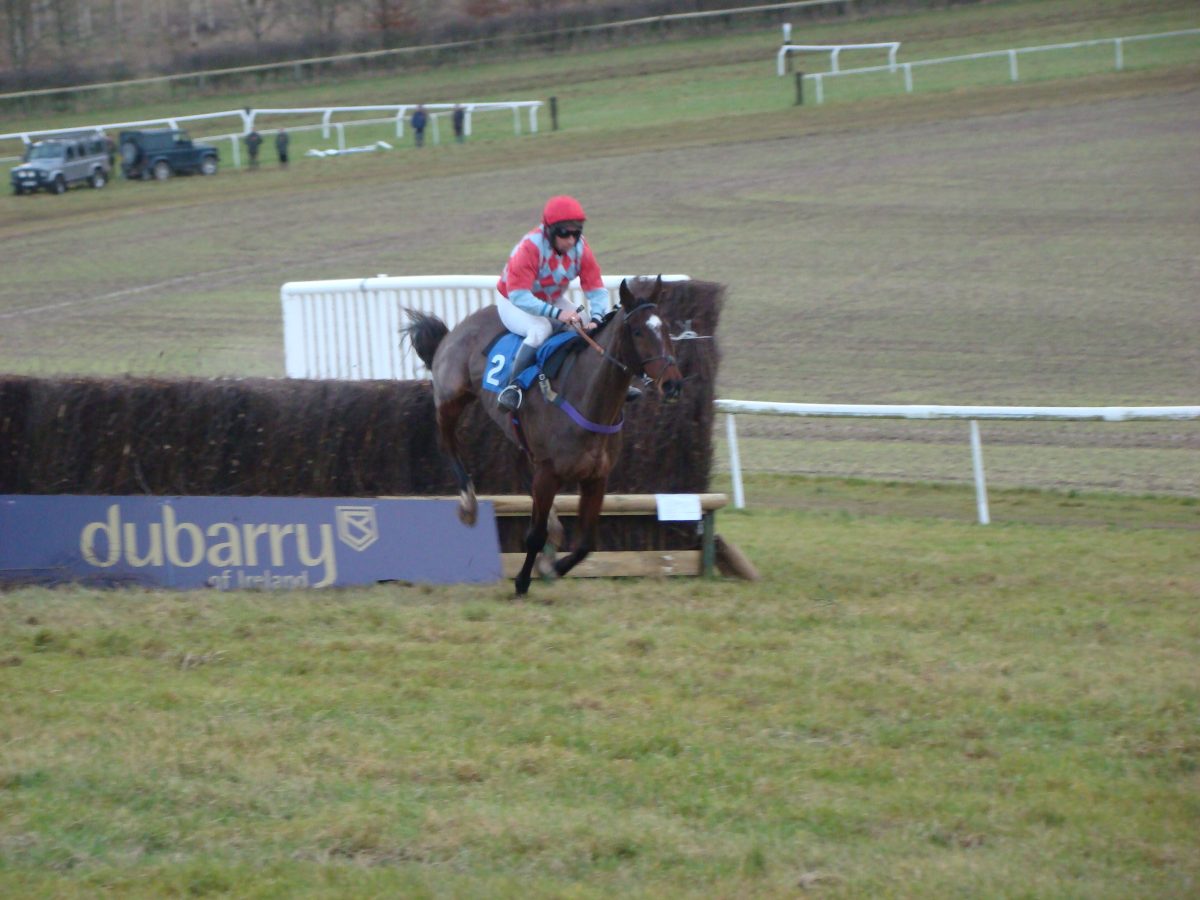 Moorcroft was finding it difficult to contain the 6-year-old son of Stowaway exuberance but despite a couple of early errors they held a 20-length advantage for most of the first circuit before making one error to many and falling at the 10th.

The race then took on a different perspective as the remaining runners adopted a more tactical approach.

The runner up Clever Des Assence held the advantage around the final bend but Bradley Gibbs was oozing confidence and produced his mount with a tremendous turn of foot that took them through to dispute the lead at the penultimate.

Gibbs’s mount had the race in his pocket approaching the last which he popped over to win by a comfortable 2 lengths with The Minkle back in third. 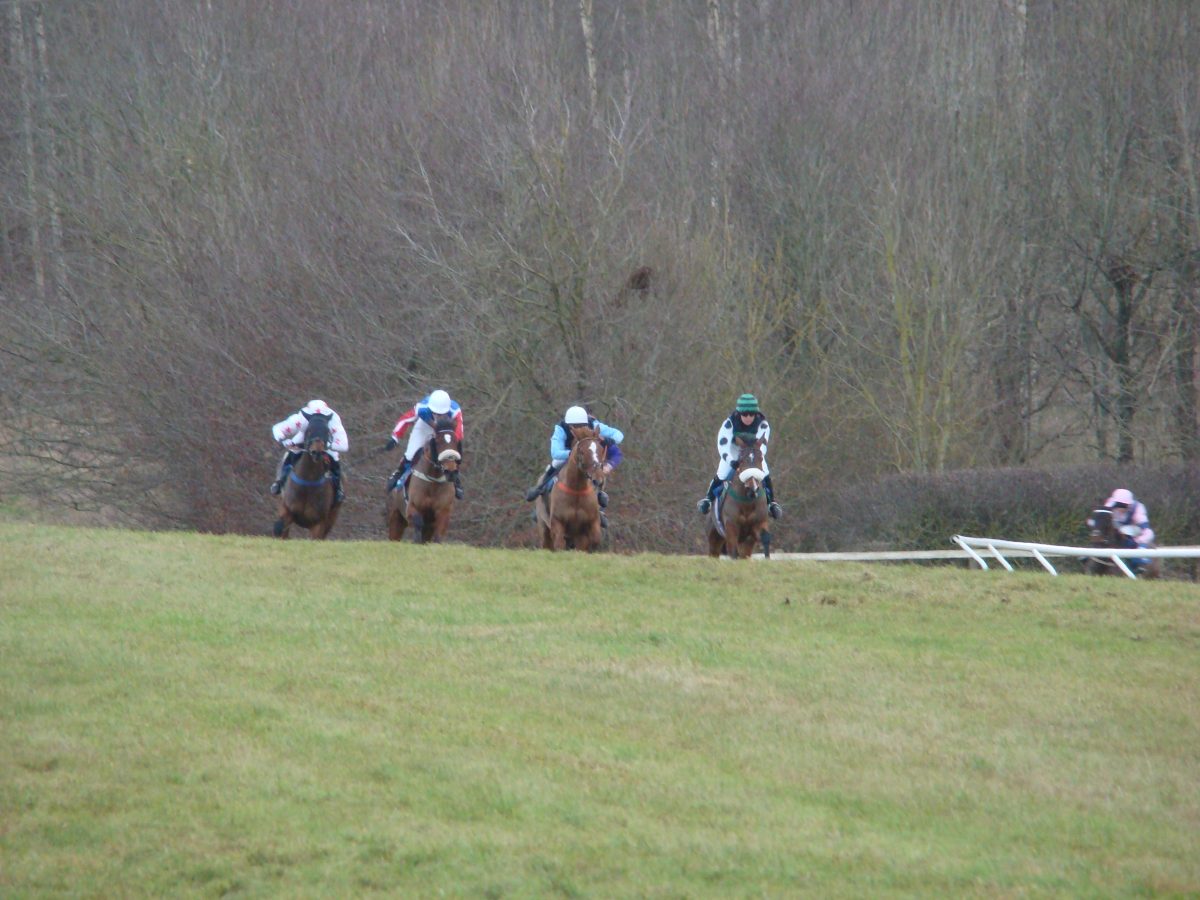 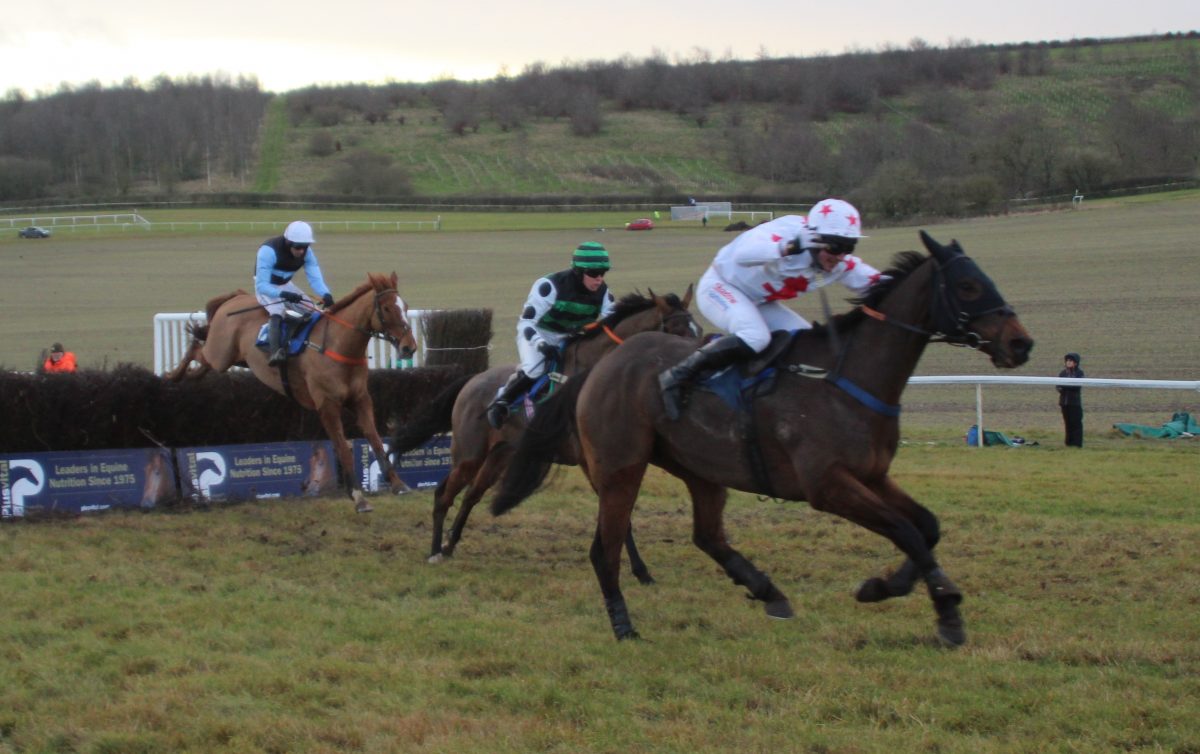 “We fancied him at Dunsmore but he had a slight issue that day but has been brilliant at home and this is a great end to a frustrating day. We got the horse by chance. We brought Little Windmill at Goffs September Sales and needed a companion for him on the way home. I never looked at the horse but put in the minimum bid for Family Man and got him. I think he has enough speed for the 2-1/2 mile Restricted. He was patiently ridden because he has so much speed and Bradley came around the outer in search of better ground.” 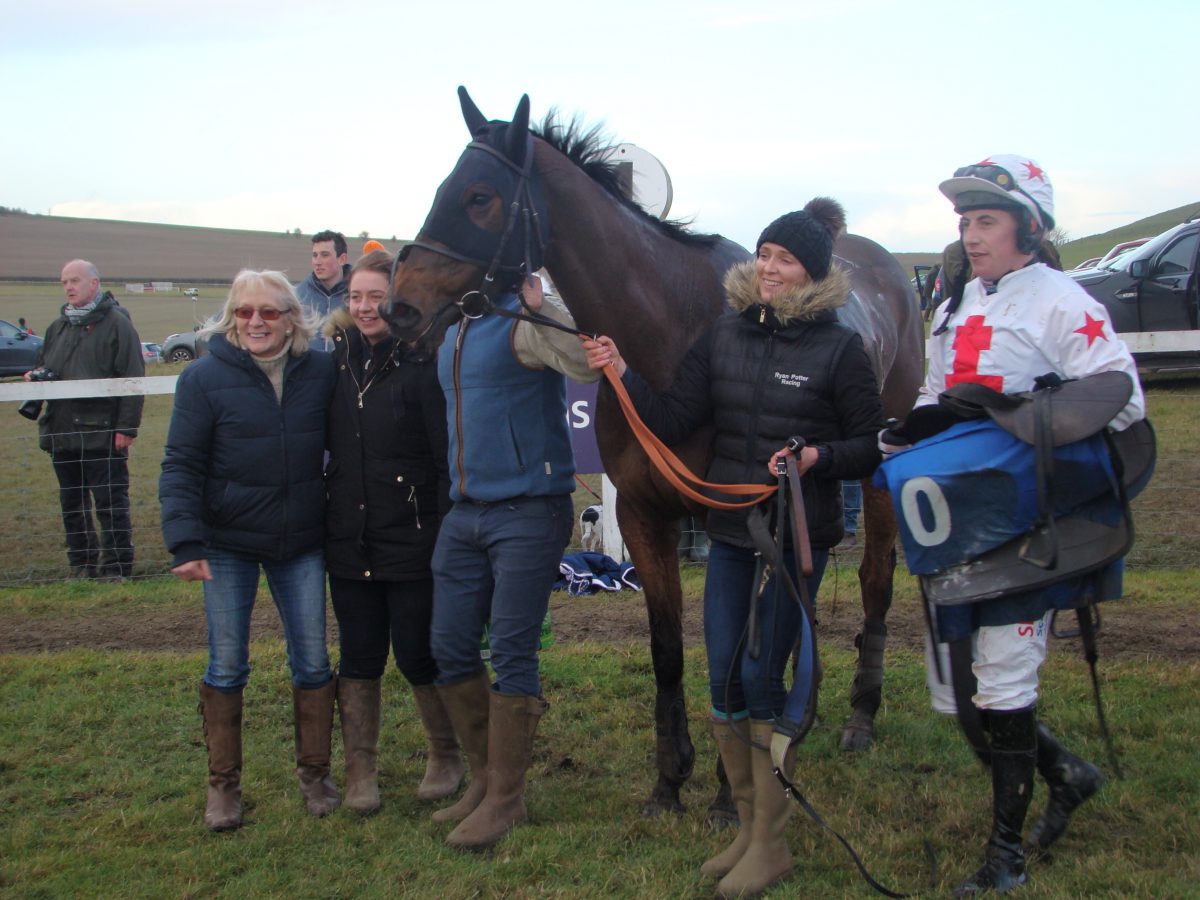 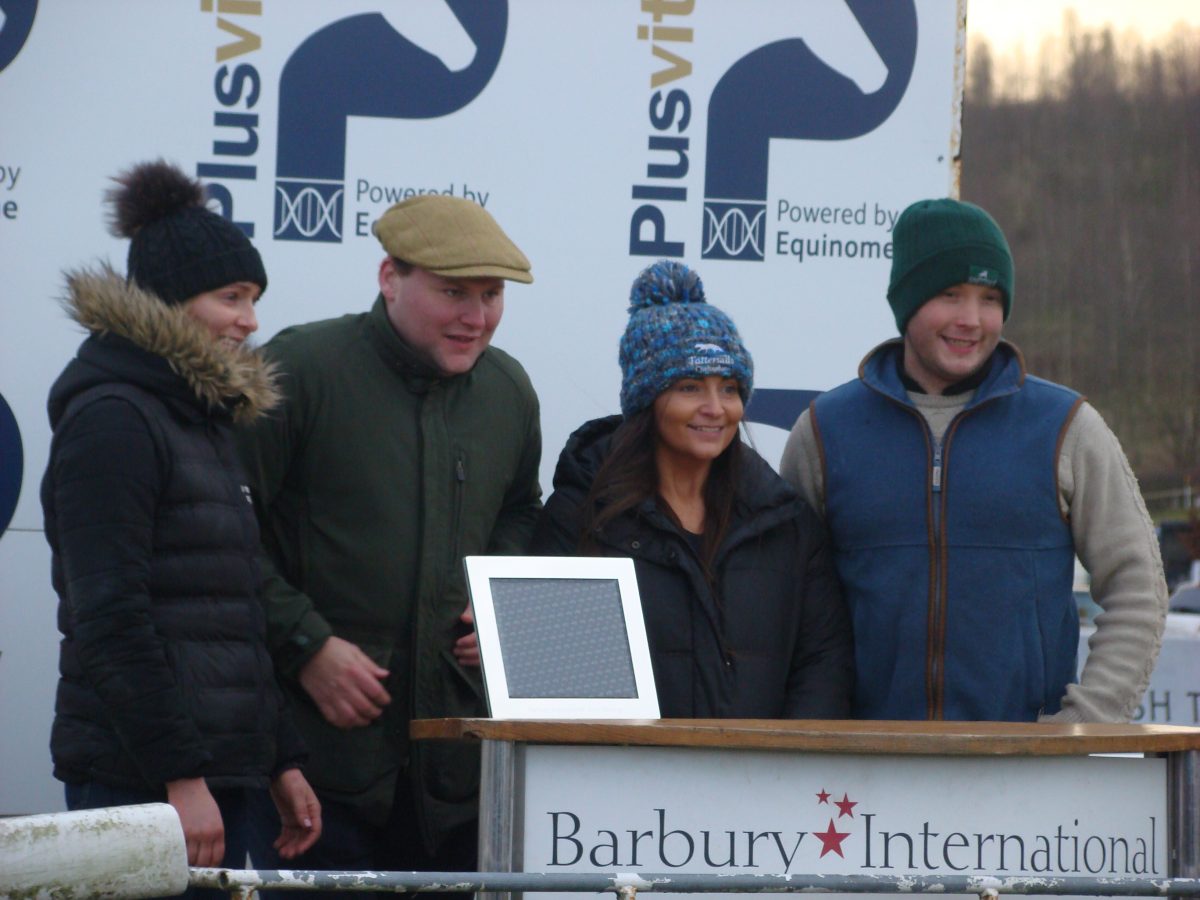 “I came and walked the course early and with the jockeys reporting the ground as good I phoned Emma up and told her to bring the horse. Later reports said the ground was soft but it was too late then because she was already on her way. He is not easy to train but likes a routine and we got here 30 minutes before the race because he can get worked up. I hope to take out a full licence next summer”.

Phil Rowley got the day off to a bright start with Raffle Ticket winning the Irish Thoroughbred Marketing Flat Race under Alex Edwards.

The horse’s reputation had obviously preceded it as the 5-year-old headed the market. Vain King led around the final bend but Alex Edwards produced Raffle Ticket with perfect timing to hit the front in the final furlong and prevail by 2-lengths from the Irish challenger Fix the Bill who took the runners up spot on the flat. 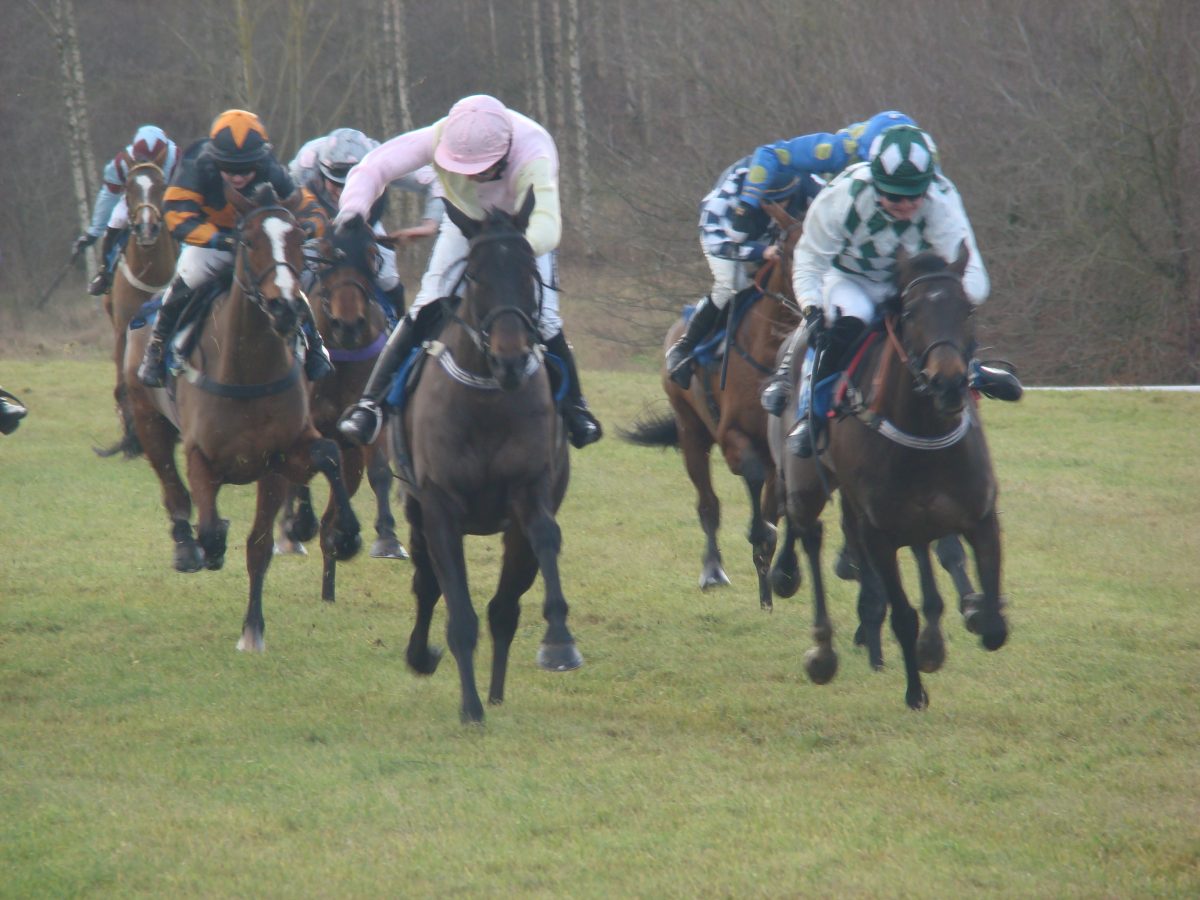 The horse’s owner Lady Cathcart runs the winner under a West Norfolk certificate and she explained afterwards “He was brought unbroken as a 3-year-old and we were going to run him last year but Phil suggested it would be better not to as he was too big and weak. The patience has paid off”. 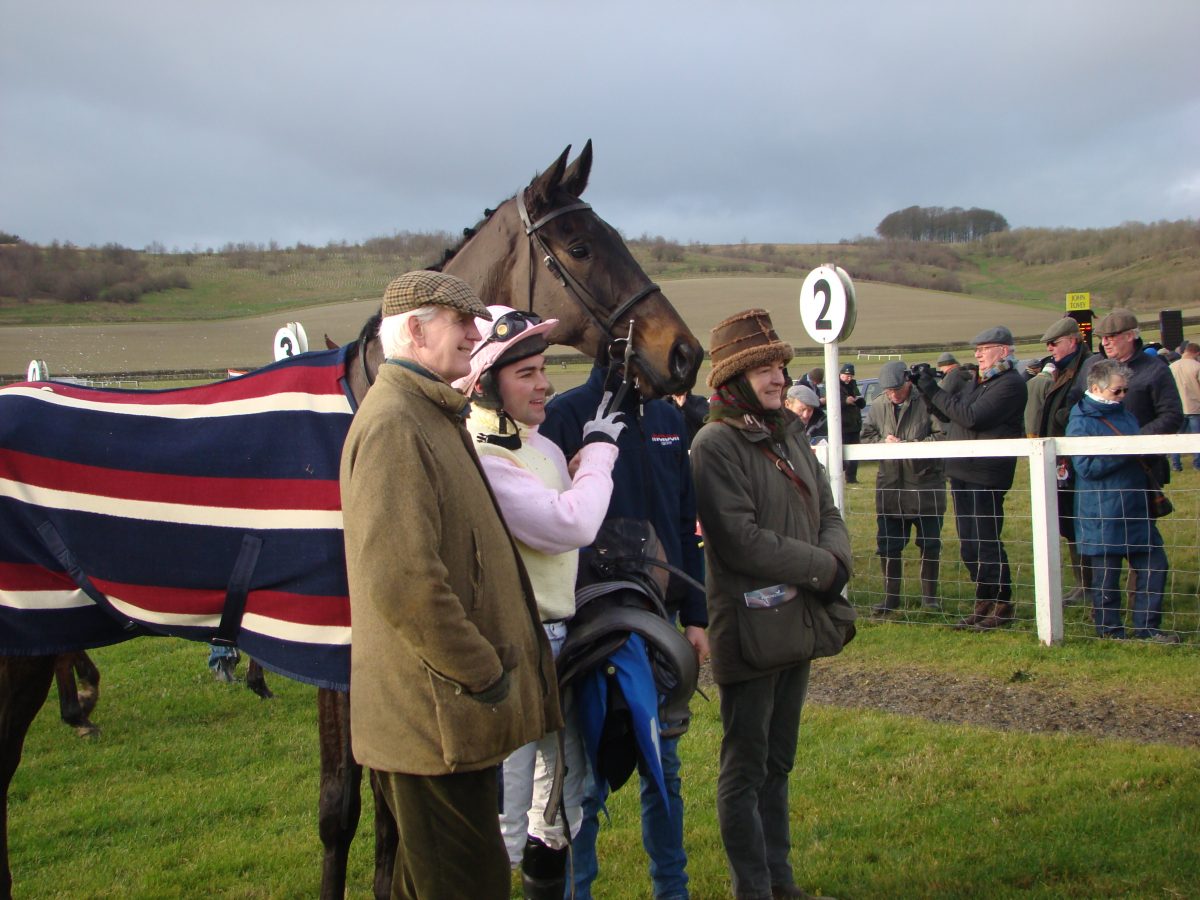 Connections pose for photo’s after the horses success

When West Midland trained horses aren’t winning their jockeys are and James King was successful on One True King in the Goffs sponsored 2-1/2 mile Maiden. This race was run in the worst of the afternoons weather but the winner was never in danger of defeat after taking the lead soon after the start.

He had a clear advantage over Ahead of the Game and was left well clear when that horse pulled up approaching the second from home which left the Young O’Leary and the Sophie Lacey trained and Ledbury qualified Lagonda to take the minor honours. 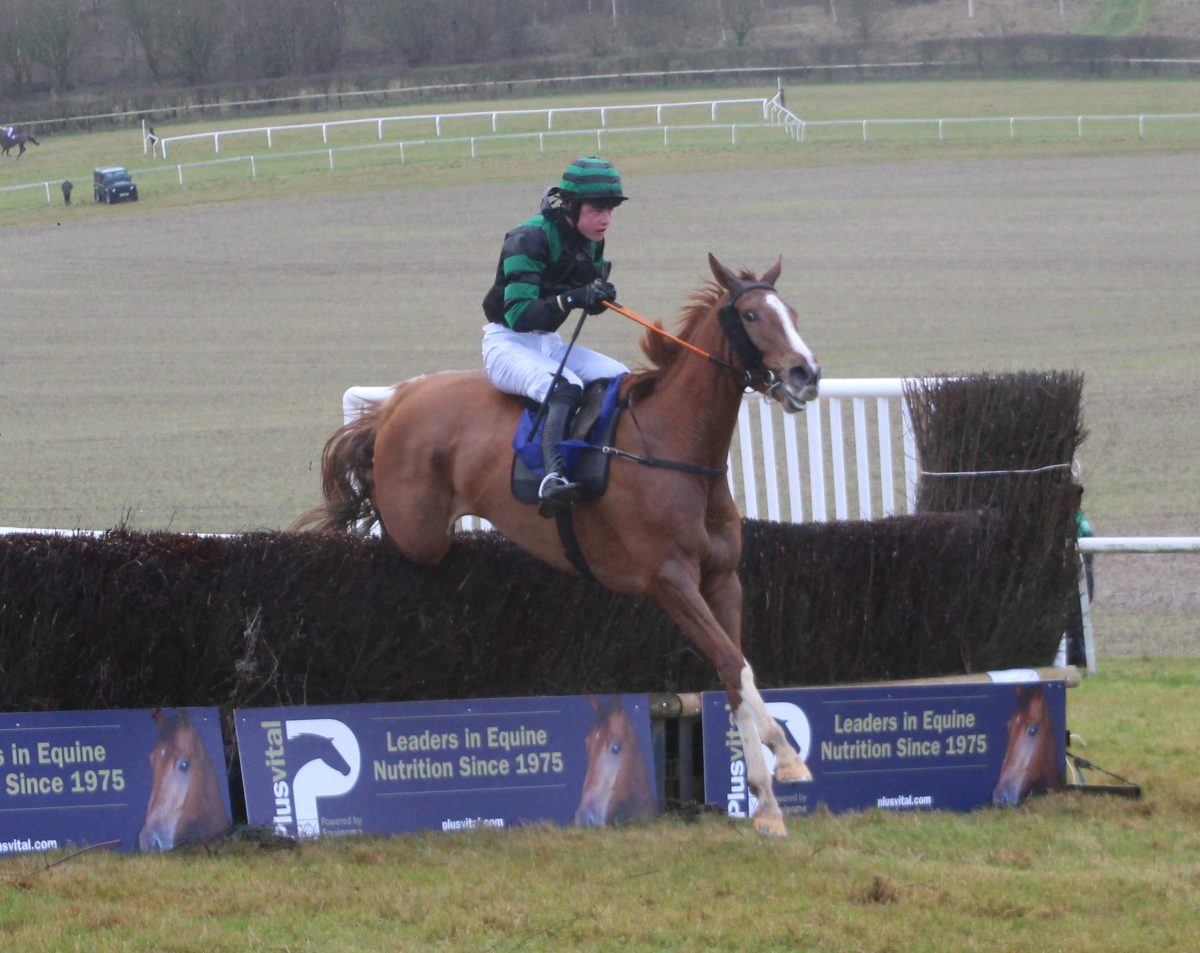 One True King scores for the Irish at Barbury

The winner was one of several Irish runners throughout the afternoon and they must have been impressed by the generosity of the English bookmakers.

Zac Baker got his name on the scoresheet when Lady Sally proved too strong for her rivals in the Mares and Fillies Maiden.

Edabean and Bryon Moorcroft carrying the Jason Warner colours had been prominent from the start and led the runners down the back straight where Diva Du Maquis unseated Dave Mansell when still in contention.

The favourite So Socksy led on the final bend but was quickly swallowed up by Baker’s mount who stayed on well to land the spoils for Lambourn trainer Mark Grant.

Division II of the Novice Riders went to another West Midland trainer Sally Randall although she herself was absent saddling Tequila Blaze from Fergal O’Brien’s yard at Carlisle.

Call Me Vic races under a V.W.H. certificate and the race turned out to be a match between Albi Tufnell’s mount and Ben Bromley on the Rowley trained Ballykan in the closing stages.

There was little between the two runners until Ballykan made a mistake at the penultimate and a more serious error at the last which finally ended his chances with the winner cementing his authority in the closing stages. 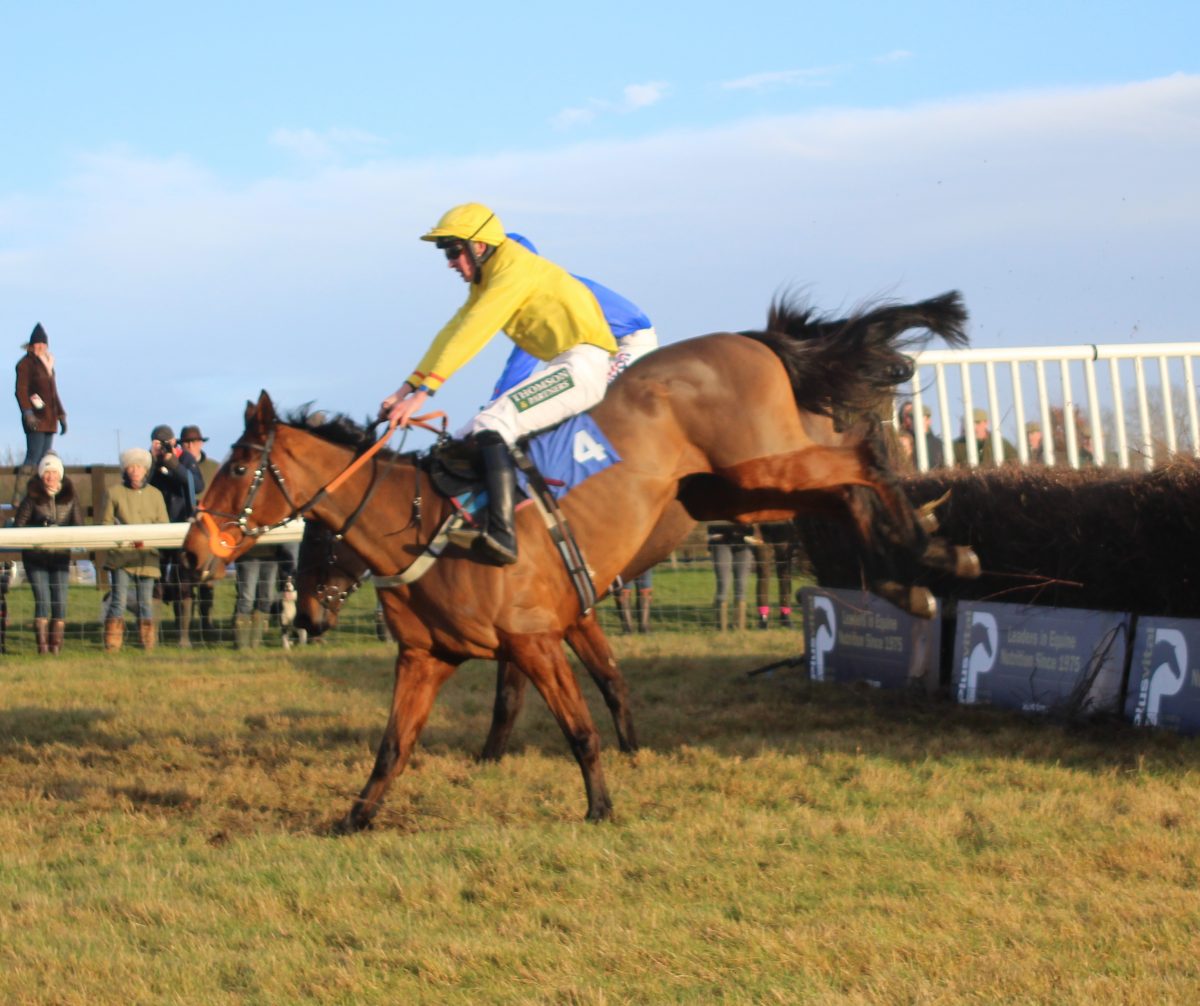 West Midland trainer Nick Pearce’s long journey to Alnwick on Sunday proved worthwhile as the former Grade 1 winning chaser ploughed through the soft ground to gain his first victory for four years in the hands of Tristan Durrell.

Following this success, the Croome and West Warwickshire qualified gelding needs to win another Open to meet the qualification criteria for both the Cheltenham and Aintree Foxhunters.