The emergence of new talent is vital for any sport so it was good to see two young West Midland based trainers James Ridley and Jake Slatter advertising their skills during Saturdays Golden Valley meeting at Bredwardine and showing that hard work, patience and dedication does have its rewards.

Slatter’s talent has been self-evident this season with his handling of You’re the Man’s whose season did not get off to an auspicious start but has improved greatly in his subsequent runs.

The Toddington trainer proved he is “no one hit wonder” by striking at the first time of asking with Waterloo Warrior who had shown useful form under Rules for Colin Tizzard. 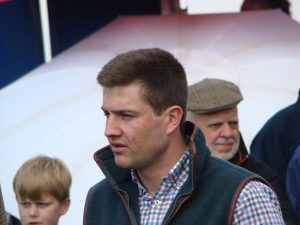 That was sufficient for the 7-year-old to be installed as favourite in the 6 strong field with James King content to let others cut out the donkey work during the early stages of the contest.

Benim and Sam Burton went to the front at the 6th and continued to set the pace until King and Waterloo Warrior moved into contention down the back straight.

Burton’s mount held a narrow lead around the final bend but weakened dramatically between the final two fences which left Charlie Dando and Loodeen to throw down their challenge approaching the last. 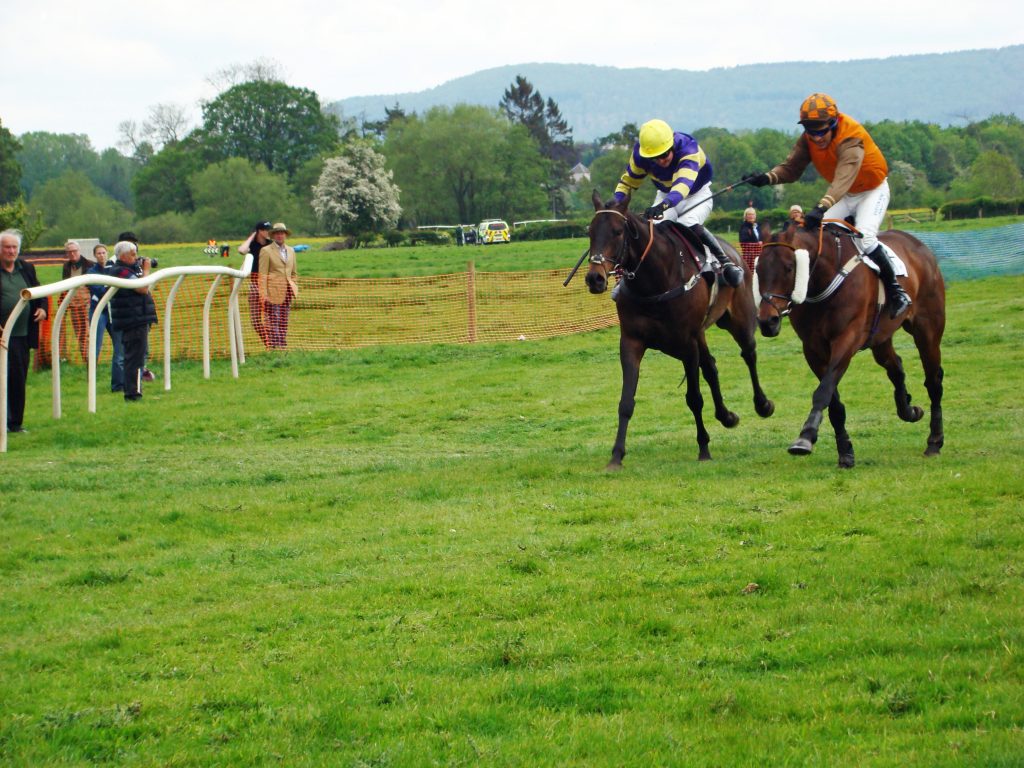 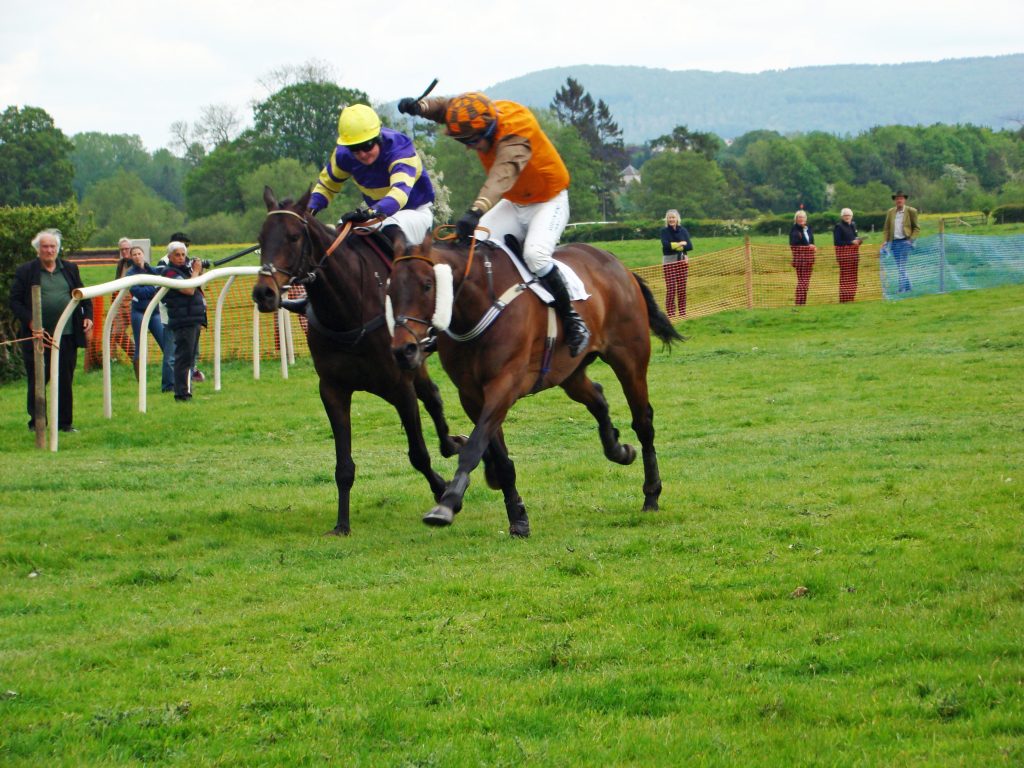 The latter had a slender advantage at the final obstacle and looked set to consolidate his lead on the flat but Waterloo Warrior stuck his head out and rallied gamely with  these two brave horses battling it out up the run in before King’s mount eased clear in the closing stages to prevail by three quarters of a length.

The winner is owned by the trainer’s mother Angela who said afterwards “The horse didn’t like the dirt cover crossing or the last fence when he was in front but thankfully, he rallied close to the line.

She also revealed how the horse came into their care “We lost Bally River Boy at home during Cheltenham Festival week. We had a friend staying who was good friends with Garth and Anne Broome from Brocade Racing and they thought Waterloo Warrior might enjoy a change of scenery and the drop into Point-to-Pointing. The horse is 17.2 but is sensible to ride and Jake has done a brilliant job sweetening him up”.

James Ridley has been and still is still a very accomplished race rider but is now making a name for himself in the training ranks and the Kinnersley handler saddled Green Winter to win the Mens Open while Cashmoll was successful in the Mares and Fillies Maiden.

Four horses lined up for the Men’s Open but it turned out to be a real cracker with the favourite Now Ben attempting to concede 3 lbs to the ultra-consistent Green Winter.

Zac Baker set the pace but Alex Edwards was playing a waiting game until sending Now Ben to the front at the 9th and they dictated the second half of the race.

There was not much between the two horses down the back straight but Green Winter looked in trouble as Now Ben eased clear after the 17th. Zac Baker never gave up hope and was rewarded for his persistence when his mount began to reel in the leader approaching the last. 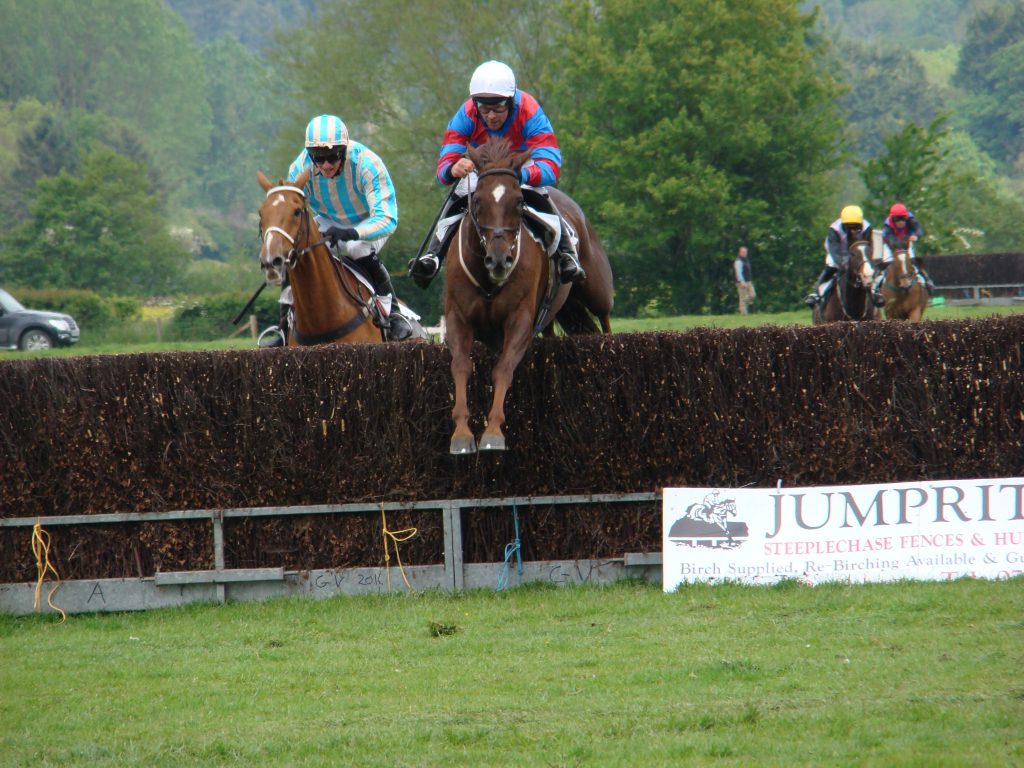 Now Ben and Alex Edwards are clear at the last, but Green Winter stamina then comes into play

Now Ben started up the run in with a 3-length advantage but Green Winter was now getting into full stride and managed to get his head in front just before the line to prevail by a short head.

The Ridley yard have been involved with several close finishes during the course of the season, some had fallen in their favour – others haven’t. This time they had cause for celebration. 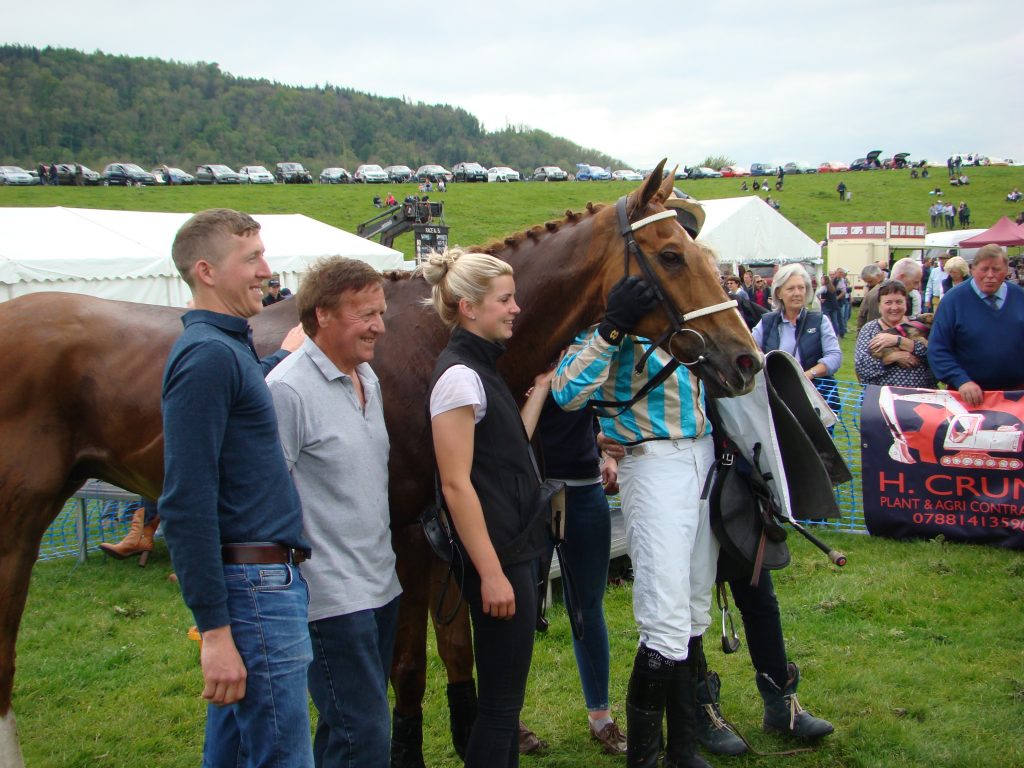 Green Winter has been a wonderful servant to Sarah Oliver and is a credit to the owner, the hard-working trainer and his partner Jess Short and all the other staff at their Worcestershire yard.

This was the 10th winner of the season for Ridley (a target set at the start of the season) and they added another to their tally when Cashmoll took the Jockey Club sponsored Mares and Fillies Maiden.

Katie Price’s Seb’s Sister took an early lead but was proving somewhat erratic. Bredwardine has a very sharp bend at the end of the home straight, a feature which has to be overcome but it proved too much for Seb’s Sister’s which left Fleury in the lead until Cashmoll took closer order with a circuit to go.

Zac Baker’s mount held a 3-length advantage at the 16th but was harried by Quite Remarkable over the final three fences and confirmed her superiority with a comfortable success.

The winner was purchased privately by Michael and Sarah Oliver after three runs in Ireland. She had shaped well when third to Showmetheway at Brampton Bryan and was giving Red Nika something to think about when falling at the last at Woodford. 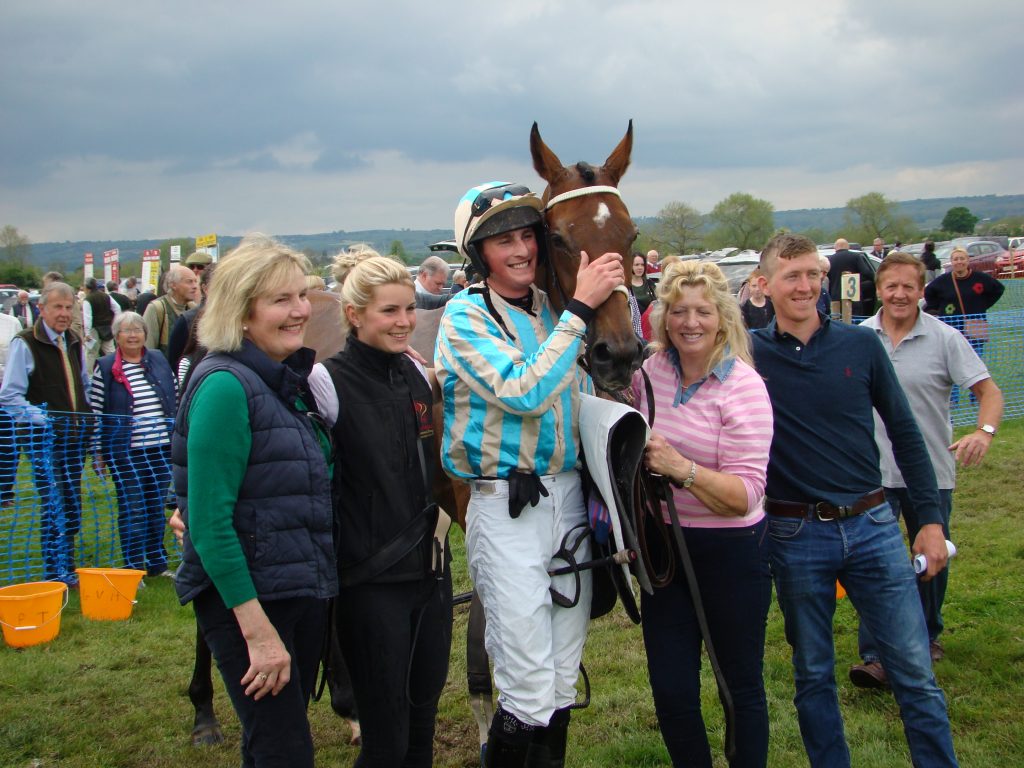 “We are still learning about her” stated the trainer afterwards “We probably made too much use of her at Brampton and she seems better coming from off the pace”.

Beni Light and Ben Jones adopted their customary front running tactics in the Restricted and Byron Moorcroft’s efforts to stay in touch on Diplomatico meant they had nothing left in reserve when they were passed by Charlie Dando and Brass in Pocket who claimed second place on the run in. 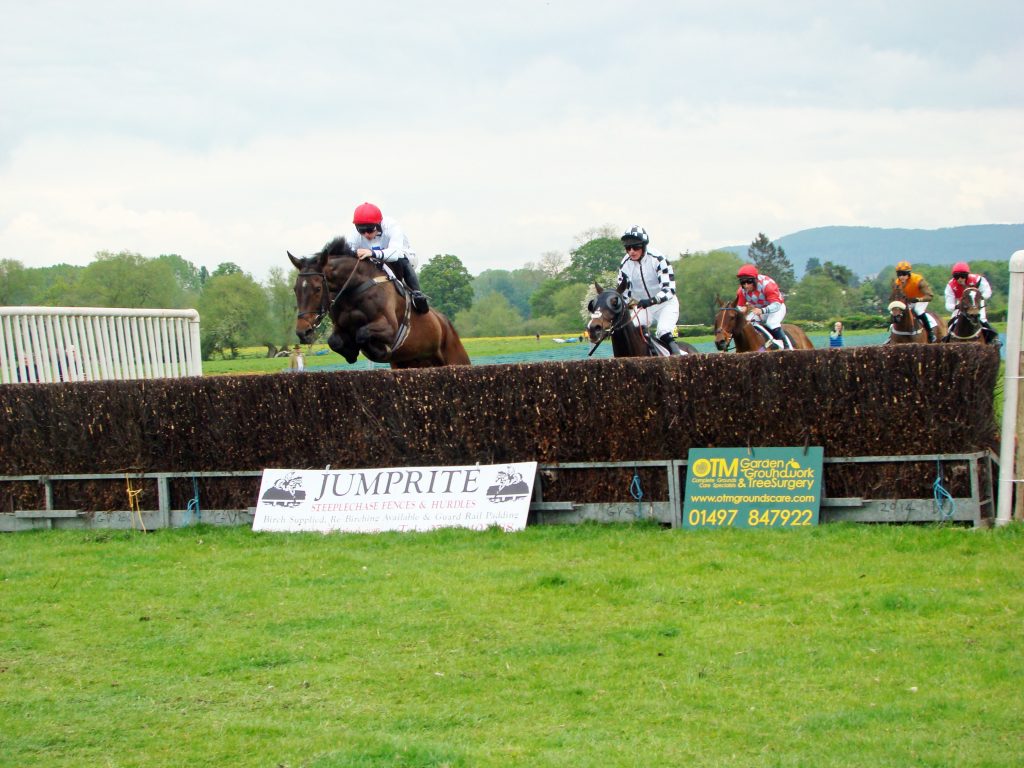 Beni Light leads Draft Pick at one of the early fences

Jones went onto to complete a double after Midnight Folie’s win in the Conditions where Lorna Brooke and King Willie faded in the last couple of furlongs after their earlier efforts to match strides with the favourite. 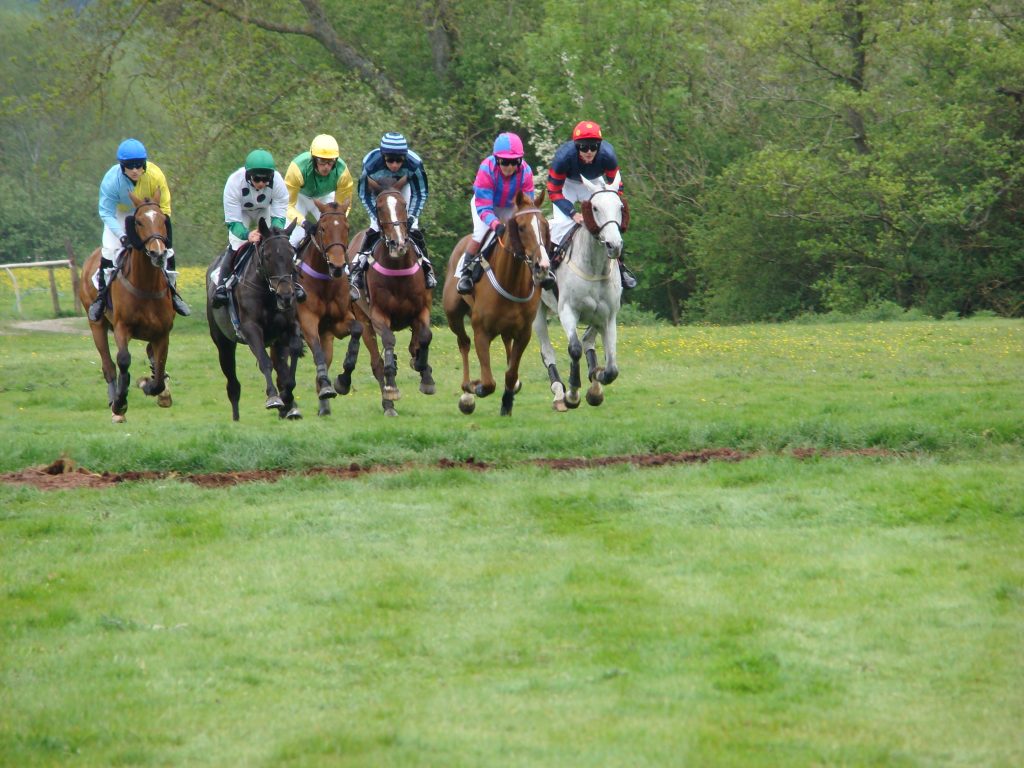 The Conditions field at halfway

It was a long journey up the Motorway for several local stables but the journey back would have flown by for Abbie Meyers and her partner Paddy Berkins, who are near neighbours of Jake Slatter at Toddington.

Vaillant Creek has been a good servant to his current yard and finally rewarded connections for their patience by claiming victory in the 9-year-old and upwards conditions race at Knutsford Races.

Admittedly his path was eased with the departure of The Clock O’Leary after which the Gloucestershire trained gelding had little difficulty coming home well clear of Royal Deal.

This was a first win and a first training success for Meyers and also a milestone first winner for 23-year-olds Berkins who works for Martin Keighley at Condicote.

Rendcomb trainer Max Comley suffered a couple of setbacks with Remarkable Man and Calvins Girl pulling up in the Conditions and Maiden Races, but gained compensation when Cloudy Joker prevailed in the Mixed Open.

Issy Marshalls mount had just failed to last home at Cold Harbour but adopting his customary front running role he proved too strong for Fair Exchange during the final half mile.

Later in the afternoon Caroline Robinson saddled the Albrighton & Woodland qualified Rules of War who just lasted home from Love Around in the Restricted.

Local representation was thin on the ground at Edgcote where Black Jack Rover and You’re the Man renewed their rivalry in the PPORA Novice Riders Final.

Supporters of the favourite soon knew their fate when Harry Homer pulled his mount up after a couple of fences while You’re the Man soon hit the front but like several horses at previous meetings ran out on the bend at the end of the home straight.

There was one local success following You Know the Story’s success in the Restricted. Gina Andrews set out to make all on Martin and Jane Wanless’s North Cotswold qualified mare. This kept her out of any trouble which is more than can be said of Velvet Cloud who fell at the fourth from home when in close contention while Tom Strawson was just beginning to make his move on Charles Brown when they were brought down at the same obstacle.