The season continues to go well for West Mercian horses with four successes at Larkhill on Sunday afternoon, to add to Caroline Robinson’s winner (Ryans Fancy) at Hexham with both meetings doing well to survive the weekends arctic blast.

Point-to-Point enthusiasts are a hardy lot and they needed to be as a bitterly cold wind swept across Salisbury Plain and the crowd’s demeanour was also tested as racing was put back an hour due to frost.

The most impressive winner at the Hursley Hambledon run meeting was Cheltenham de Vaige in the 2-1/2-mile Men’s Open. Five horses lined up including two with local connections Sky Marshall from Nickie Sheppard’s Eastnor yard and Cheltenham de Vaige who is based with Hannah Lewis at Holdfast Stables near Upton upon Severn.

Capitaine who had won numerous races under Rules for Paul Nicholls was installed as favourite and the 9-year-old enjoyed a dream start with a quick getaway while the others were slow to respond.

Will Biddick’s mount set a strong gallop but his jumping left something to be desired as his round was littered with mistakes, with Too Many Diamonds shadowing him in second while Sky Marshall and Cheltenham de Vaige were content to see how things developed.

Sky Marshall began to lose touch breasting the final hill, while Too Many Diamonds dropped back as Bradley Roberts sent Cheltenham de Vaige into a clear lead and they continued to increase their advantage throughout the final half mile. 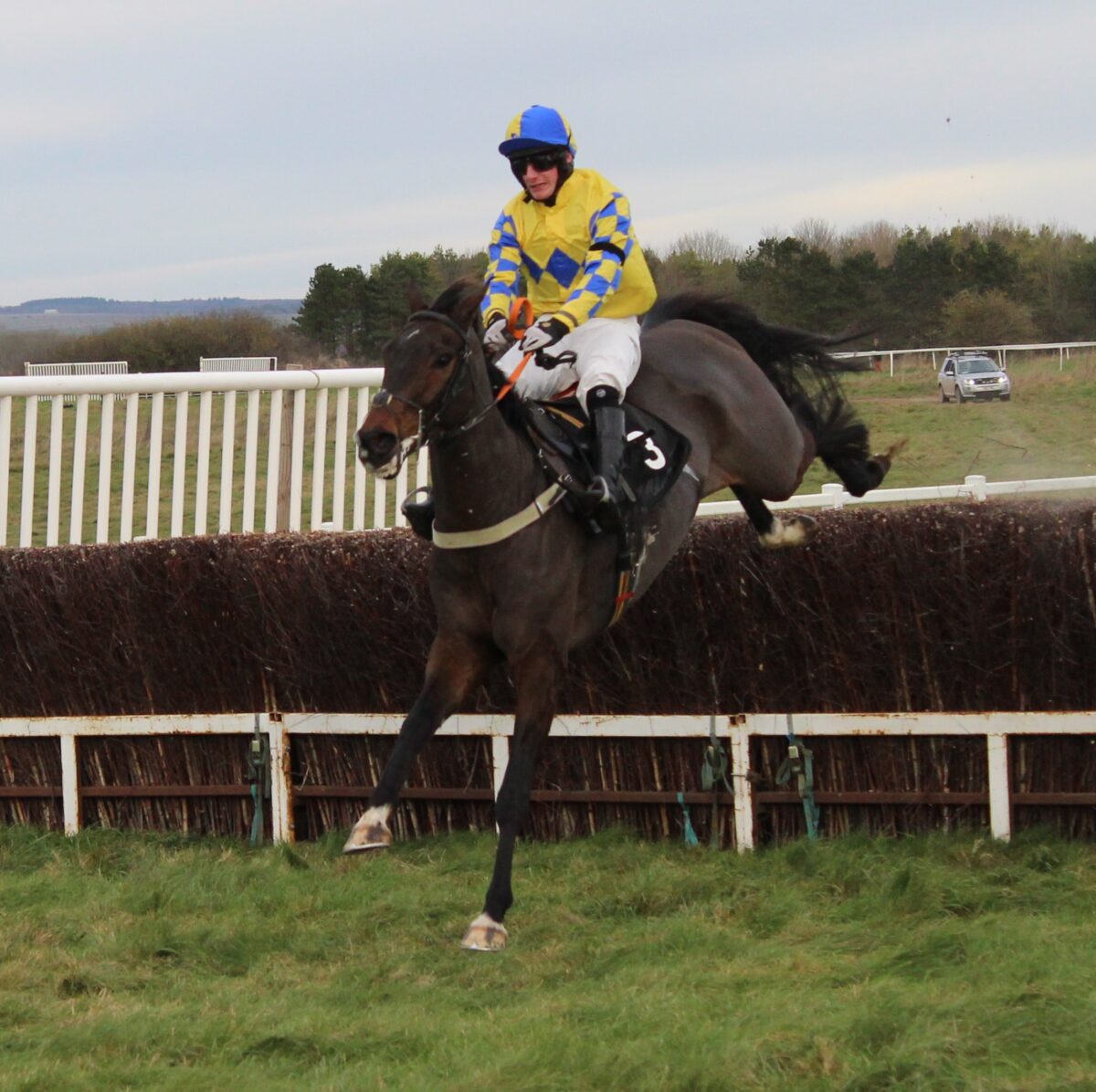 Connections admitted afterwards “the horse is quirky, so he was walked down to the start with the riders’ feet out of the irons, this seems to keep the horse relaxed. We have to keep a lid on him and this tactic worked under Rules”.

The Burford’s also explained “he likes the ground and the trip so we had to get him out early, and we would like to aim him at one of the races during Cheltenham’s Hunter Chase meeting in May”. 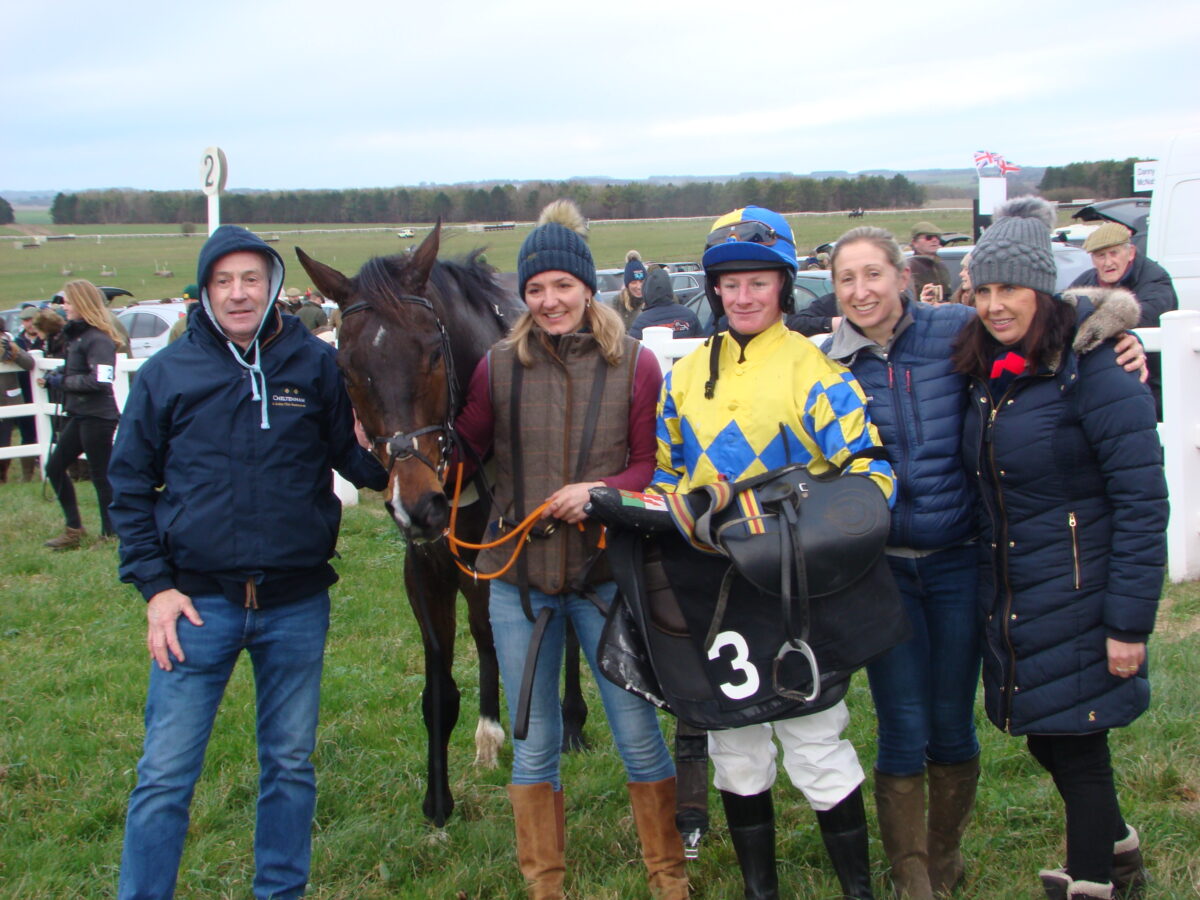 This was a second Point-to-Point success for 21-year-old Bradley Roberts, although he has also ridden 5 winners on the flat. His last success between the flags was back in April 2017 but he conceded “I lost confidence after a number of falls and I have to mention David Loughnane and Graham McPherson/Fergal O’Brien for keeping faith in me”.

“The horse flew home today and is really enjoying life and that is due to Hannah Lewis who has kept him calm and collected. It’s the first time I have ridden him in a race”.

Roberts had to put up with some ribbing from his colleagues when he was unseated after passing the post, but the pairing were reunited in the winner’s enclosure.

The meeting opened with the first of the Tattersalls sponsored 4-year-old Maidens with three horses originally declared for this 2-1/2 mile contest but following a late withdrawal Olly Norse (Tommie O’Brien) was just preferred to Fabstroke (Huw Edwards) in the betting ring as they went to post.

They kept one another company for most of the trip with neither horse making any serious mistakes but O’Brien’s mount gained the upper hand over the final four fences. They had the race in safe keeping on the final bend although the runner up did manage to close the gap on the flat but the favourite was always in command. 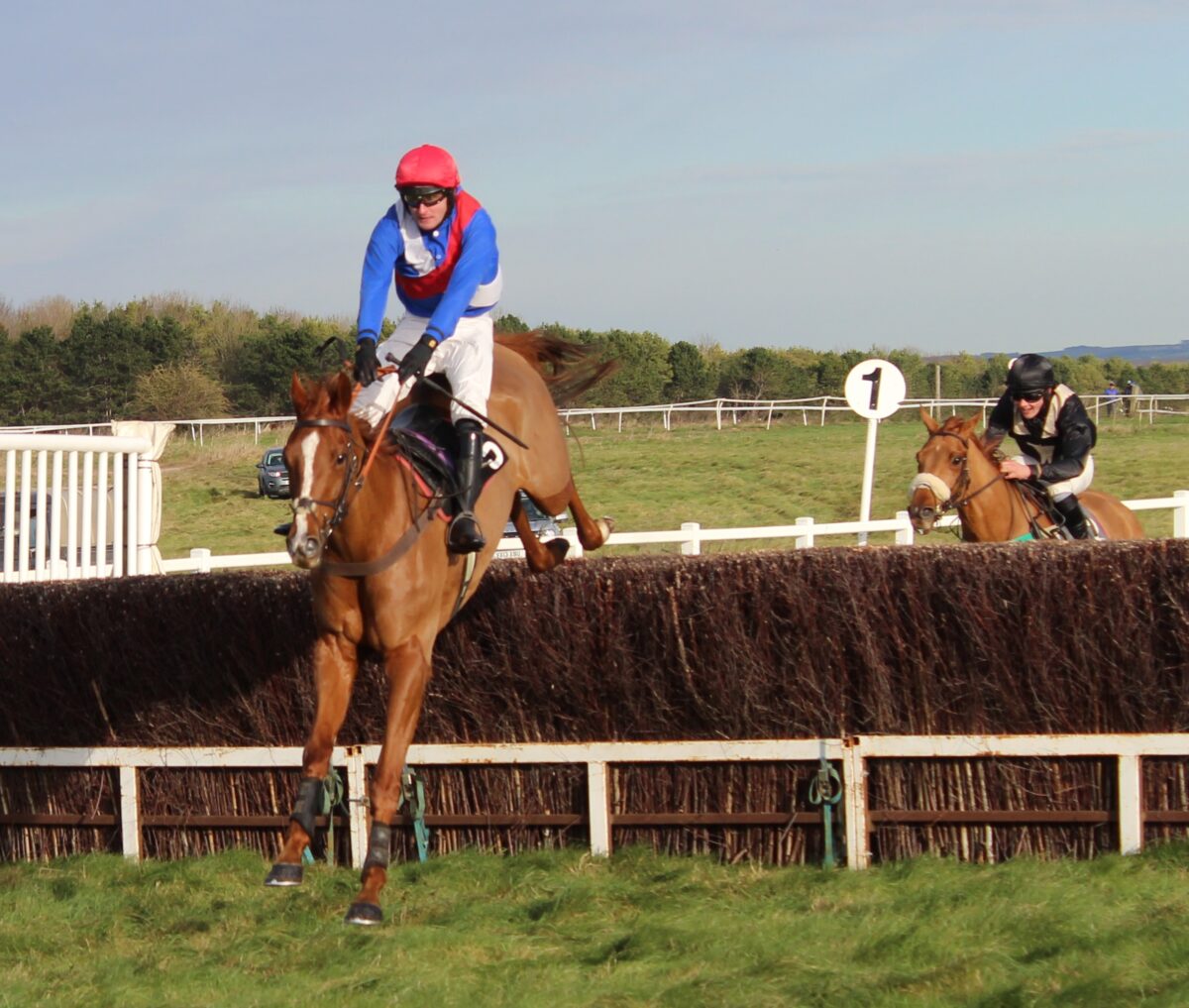 Tommie O’Brien chalks up another winner on Olly Norse

James Ridley and Tommie O’Brien struck at Ffos Las last weekend and obviously has his 18 strong stable in good form and this victory confirmed that assessment. The Ketford trainer said afterwards “Not sure how much we learnt from that win, but it is a win. We have always thought a lot of him and Tommie said he jumped well when he had company but was a bit novicey when he was in front by himself. His owner Charles Parker brought him privately after he was withdrawn from Doncaster Sales and hunted him as a 3-year-old. His dam won a number of Point-to-Points in Wessex and he is a similar stamp of a horse” 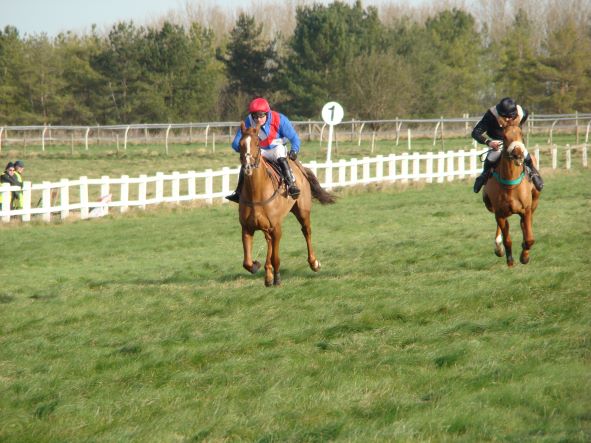 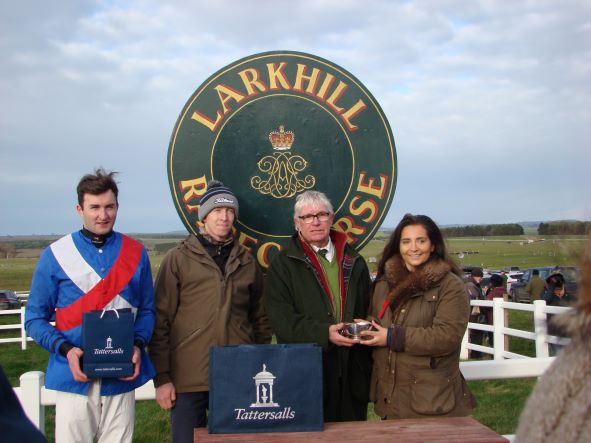 The Jockey Club and Retraining of Racehorses Veteran Horse Conditions provided the Area with its third winner of the afternoon when the Max Comley trained and Cotswold qualified Knockaderry Flyer scored in the capable hands of Darran Andrews.

With the benefit of a recent run at Badbury Rings this partnership set out to make their fitness tell and succeeded in doing so by leading for a majority of the journey, but coming back into view at the far end of the course, Knockaderry Flyer was being harried by a number of challengers including the Ridley trained Chase Me, but none of them could get past as the leader continued to respond to his riders’ urgings. They turned for home with a clear advantage which they maintained all the way to the judge. 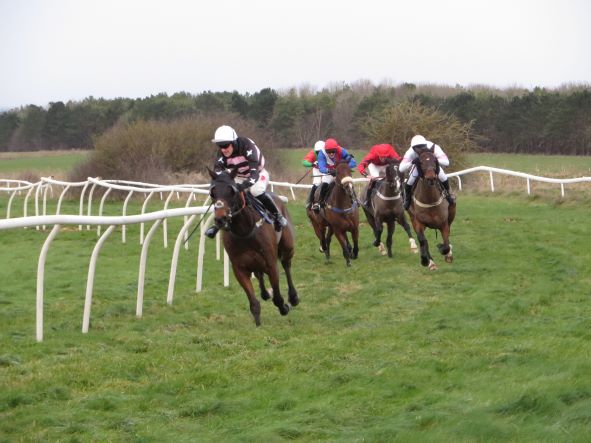 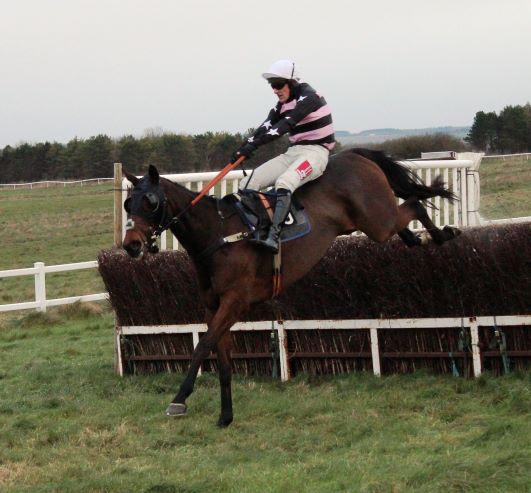 Knockaderry Flyer and Darren Andrews scoot round the final bend clear of Chase Me (blue and red), Captain Bucks (pale colours), Exxaro (red) and Triopas (red and green) – another good jump at the last seals victory

Our runners did not fare so well in the Ladies Open although Tb Broke Her was still within touching distance of the leader Tom Barton when she unseated Katie Sinclair at the fourth from home. Grageelagh Girl did her best during the final half mile but was soundly beaten.

O’Brien and Ridley successful run was halted when the odds on favourite Lagonda parted company with his rider at the second in the Restricted., while Flick the Switch was a beaten third before falling at the final fence.

The riderless horse caused problems when he carried out Arcal Fifty at the bottom of the course and victory went to the outsider Slievegar who had travelled down from Cheshire. Toby McCain-Mitchell’s mount hit the front approaching two  out to provide the rider with his second winner and the area with their fourth winner of the afternoon. 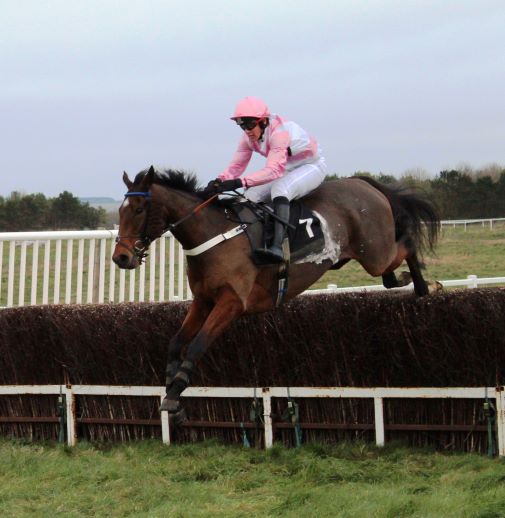