Mel Rowley staged a major assault on Sunday’s Wheatland fixture at Chaddesley Corbett by saddling 8 runners, but the Morville trainer faced one of those character-building days with odds on favourites Hazel Hill and Wishing and Hoping being comprehensively beaten in their respective divisions of the Mixed Open, while other runners failed to live up to expectations.

There did not appear to be any excuses for Hazel Hill’s defeat in Division One of the Mixed Open at the hands of 20-1 outsider Highway Jewel.

The 6-year-old mare provided a first winner for Bradley Gibbs and partner Claire Sheriff since their move to Hertfordshire. The mare had run in Irish Point-to-Points before landing a sequence of 4 wins in the Principality last year, but no one foresaw this win as the odds indicate.

Gibbs set out his stall from the start and the partnership soon held a healthy advantage which they extended as they raced by the roadside for the final time. Jockeys can be criticised for giving the leaders too much rope, but Alex Edwards was alive to this situation and quickly moved Hazel Hill into second place.

Halfway down the back straight it was evident Hazel Hill was struggling to make any impression on the runaway leader and that fact was confirmed with Highway Jewel maintaining her advantage on the stamina sapping climb into the home straight and she finished 13-lengths clear of the 2019 Foxhunters winner. 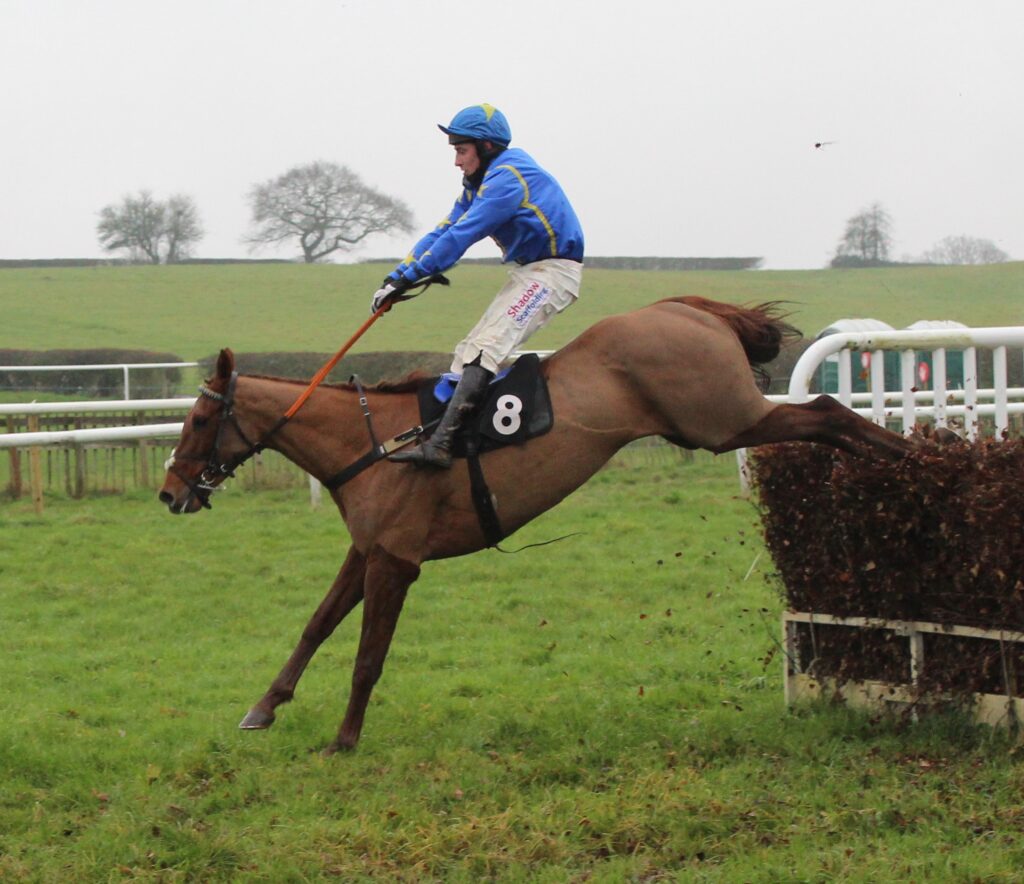 Highway Jewel flies the last to score an upset

“She’s a machine who just keeps galloping and galloping” replied Claire Sheriff when questioned later about possible objectives later in the season “She will probably be kept pointing as connections (The Highway Partnership) are keen on the sport. We wanted to run her in an Intermediate straight after lockdown but we couldn’t find any so decided to run her here”.

Connections were back in the winner’s enclosure 30 minutes later when the winner’s stablemate Premier Magic inflicted defeat on another Rowley odds on favourite runner Wishing and Hoping.

This time the roles were reversed with Alex Edwards making the running on Wishing and Hoping while Bradley Gibbs was the tortoise to Edwards’s hare.

Wishing and Hoping has shown form in these conditions in the past and his supporters had to be optimistic as the favourite maintained a 3-length lead a mile from home, but Gibbs and Premier Magic made their move approaching three out and launched their assault early in the home straight.

They swept into the lead and had the race in safe keeping before stumbling at the last but the partnership was soon back on an even keel and eventually prevailed by 6-lengths. The winner carries the colours of Claire’s father Julian and had scored impressively at Didmarton last March. 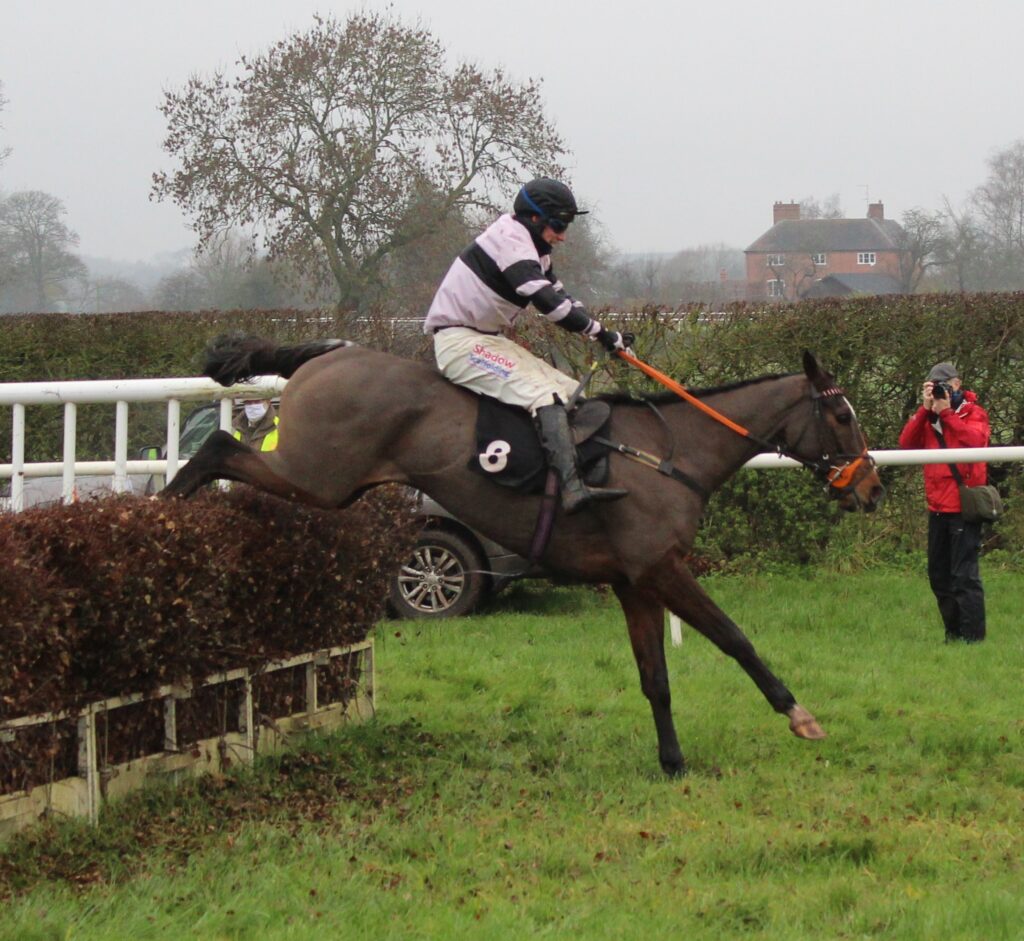 The stable had further cause for celebration after Fier Jaguen’s “success” in Division I of the 5-year-old and over Maiden, but their pleasure was eventually tempered with disappointment as “the winner” was disqualified.

A host of horses held chances as the runners left the back straight. Forest Chimes and Snowy Oscar had cut out much of the running but had Eascomesbob and Black Aphrodisiac amongst others breathing down their necks as they met the rising ground.

Alex Edwards and Forest Chimes had seen off a succession of rivals up to this point but had nothing left when Fier Jaguen grabbed the lead early in the home straight. He continued to extend the advantage and was left in splendid isolation when Forest Chimes got rid of Alex Edwards at the final obstacle. 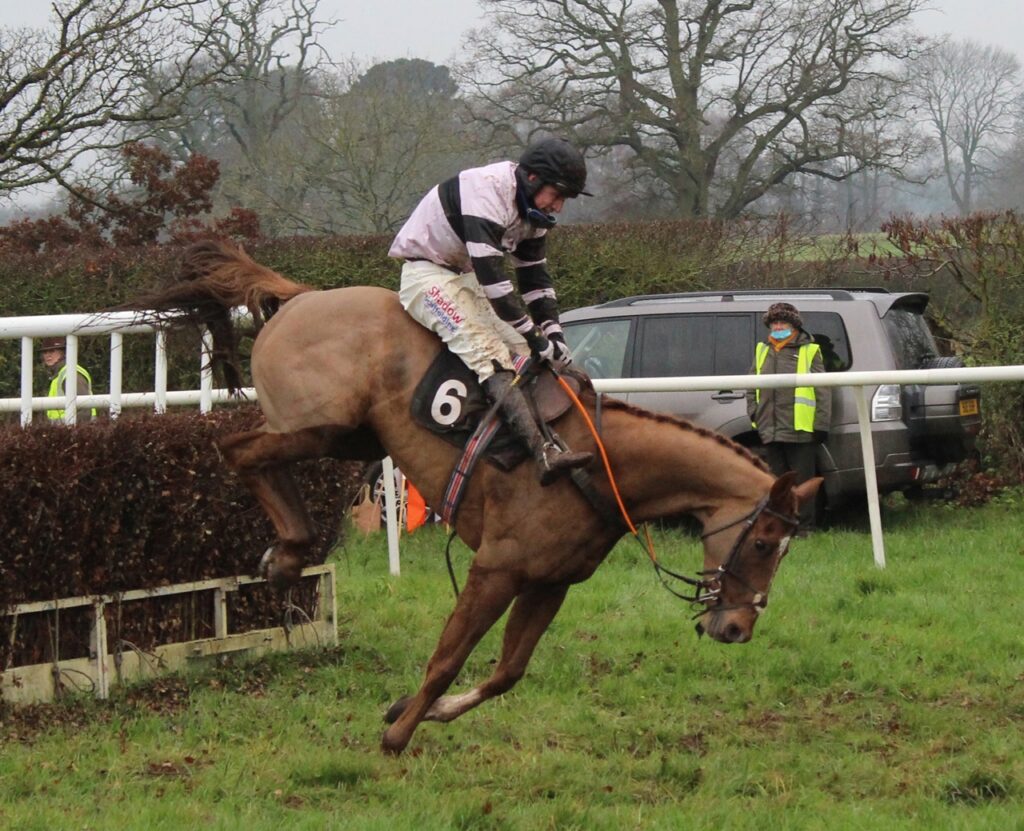 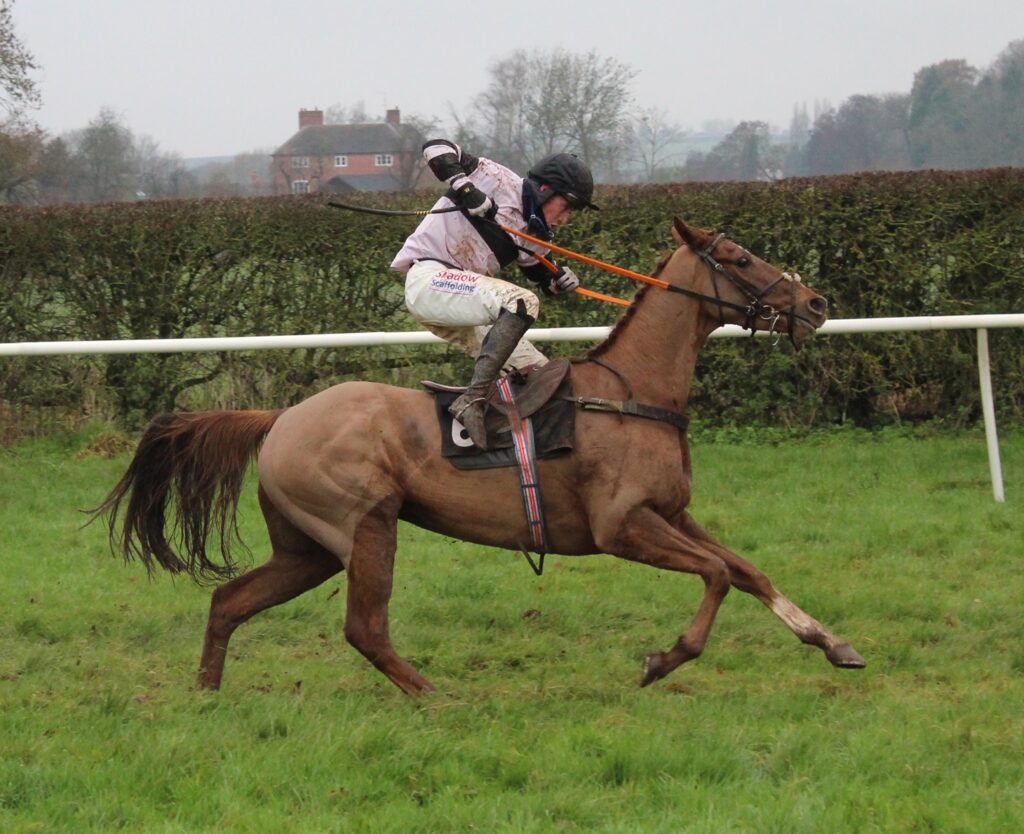 The trophies had been presented before the announcement of the result of a Stewards Enquiry which resulted in the winner being disqualified for missing a hurdle entering the back straight, so the prize eventually went to Earcomesbob from Claire Hardwicks Adelstrop stable.

Connections were hoping for a good run and were pleased with the runners up spot but equally delighted to be awarded the race. It was a first win in the colours for part owner Bob Stowe and Peter and Alison Pritchard.

The day did not start well for the Rowley’s following the defeat of Latitude in the Tattersalls Cheltenham sponsored 4-year-old Maiden. The impressive winner of a 2-mile Flat Race at Maisemore looked difficult to beat based on that performance and her jumping was without blemish.

Jack Andrews and Harper’s Brook set the pace but Latitude moved up threateningly down the back straight and it just looked a matter of time before Alex Edwards pressed the button.

The winner (a 22,000 purchase at Tattersalls Ireland in May 2019) continued to pile on the pressure and increased the tempo again during the final half mile and with Latitude weakening the runners up berth went to One fer Mamma. 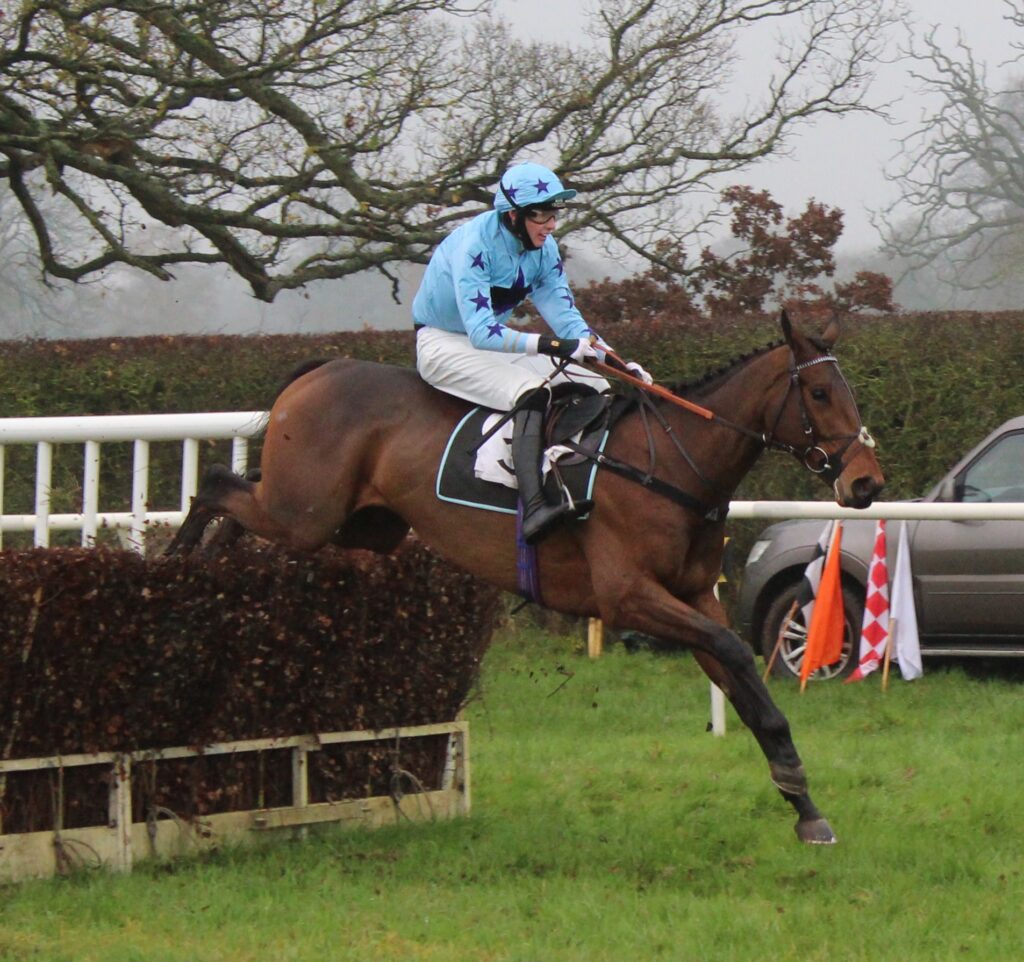 The Restricted attracted 13 runners with Well Briefed setting a strong pace throughout but Cousin Pascal moved up into a challenging position and took over the lead down by the 2-mile start.

Kimble Maiden winner Killenkere and Gottagottagetaway both looked dangerous on the home turn and the latter did manage to get on levels terms with the leader at the second from home but Cousin Pascal finally got the measure of his rivals between the final two fences to prevail by 3-lengths.

Cheshire trainer Joe O’Shea explained later “He was found by Don Constable who recommended I buy him so I made a few enquires. He won an Irish Point to Point back in 2018 and has been running under Rules where he was held up and always finished well. I have him for about 8 weeks and he has improved every day. He was passed on Don’s friend Peter Clifton to run in his colours”. 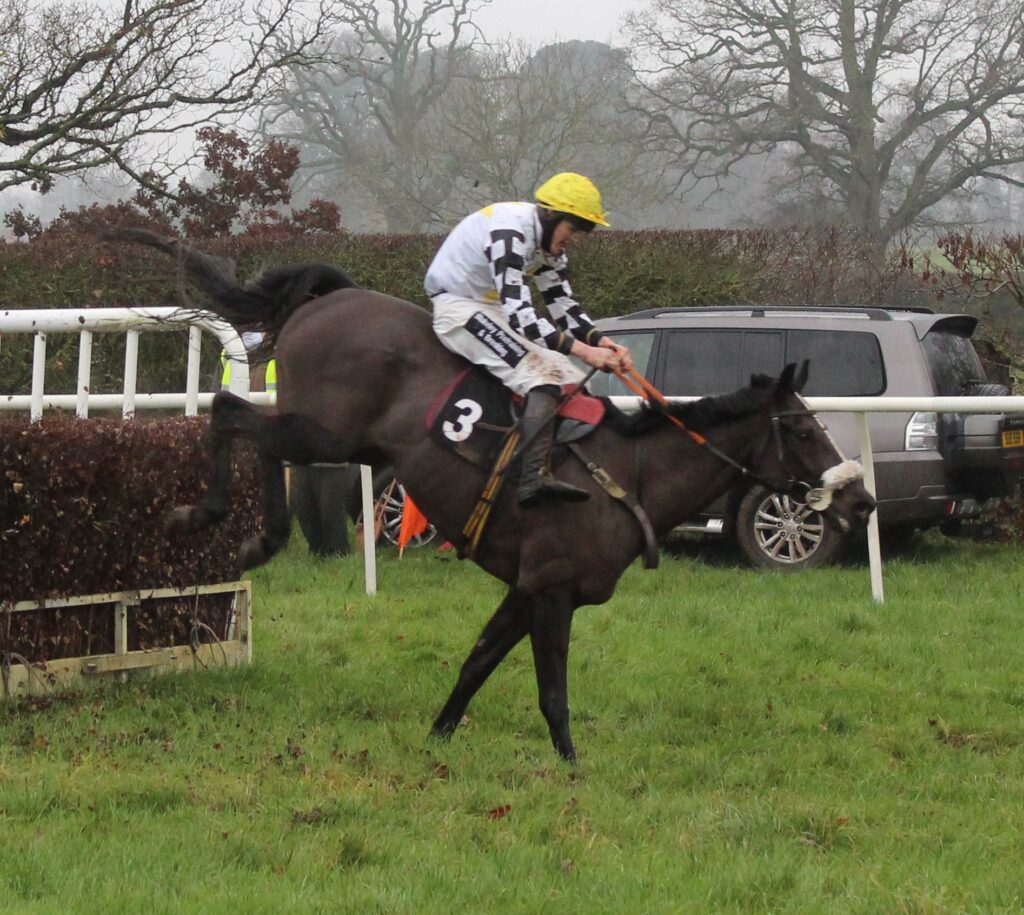 Chongalolo led from the start and were still setting a strong pace going out onto the second circuit, where George Daly and Shamilan started their effort, while Tommie O’Brien was biding his time on Racing Snake.

These three dominated the closing stages and there was little between them at the second from home but Congalolo suddenly began to flounder while O’Brien’s mount inched clear approaching the final obstacle. 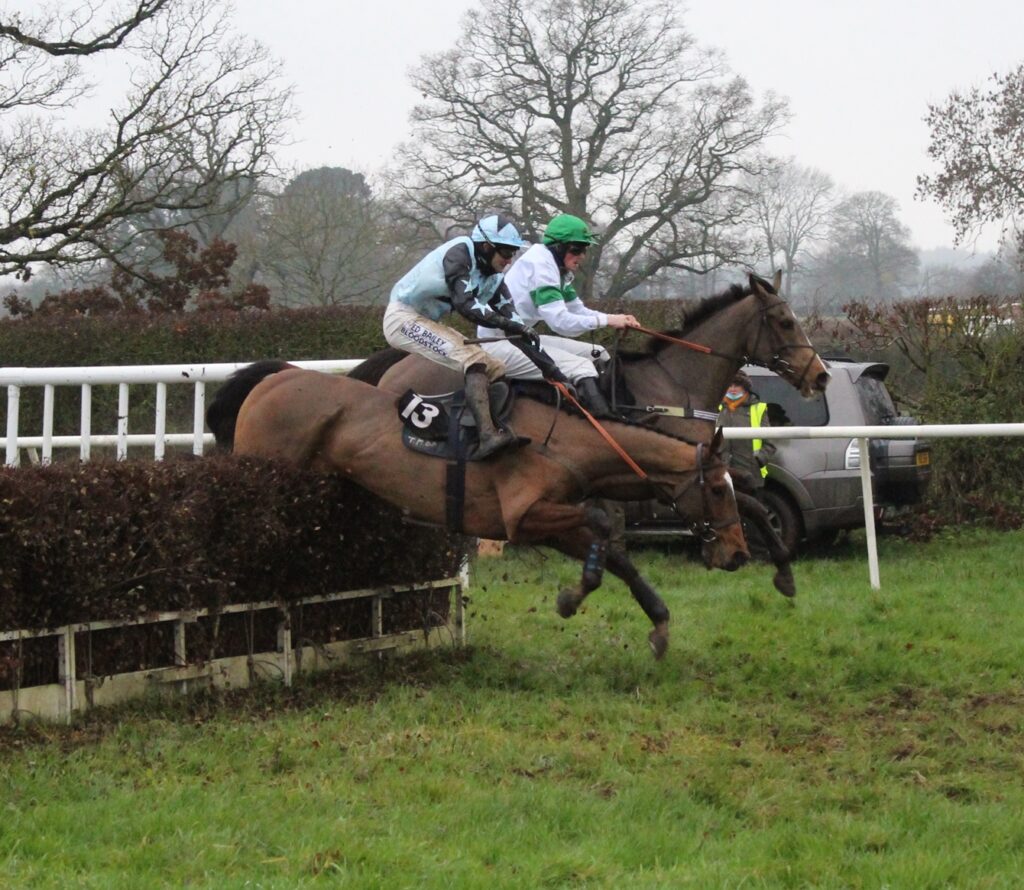 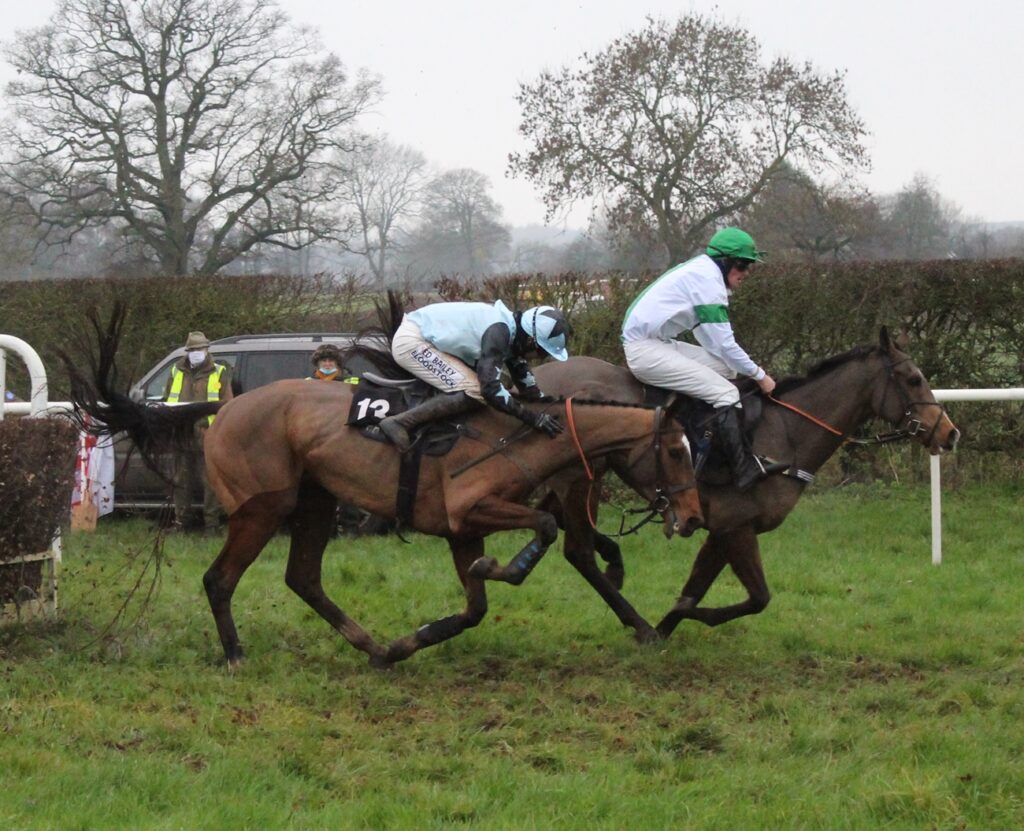 There is generally little time to recover when mistakes are made at this crucial time of a race and having gone into the obstacle with a half-length advantage Racing Snake came out of it with a 2-length deficit.

George Daly did nothing wrong on the runner up (a performance that earnt him the Three Counties Equine Hospital Novice Riders prize) but with Racing Snake now back on an even keel O’Brien refused to accept defeat and the partnership got up in the final strides to win by a short head.

O’Brien later explained to Herefordshire Businessman/Farmer and the horse’s owner/trainer Clive Boultbee Brookes. “He was tired at the last but I did not want to put him on the ground so just popped it. I thought I would get there but it was very close. He handled the ground well”. The owner is based in Tom Lacey territory at Woolhope which allowed O’Brien to help with schooling.

Misty conditions prevailed throughout the day, and were particularly testing later in the afternoon but Chase Me’s bright red cap was visible from the start of Division II of the Conditions.

Zac Baker has a good relationship with the 9-year-old son of Mahler and along with Inchcolm these two battled for supremacy from the start which resulted in their rivals dropping away at regular intervals.

The two main protagonists had the race to themselves in the home straight with George Chatterton driving his mount along to repel Chase Me’s challenge at the second from home.

Approaching the last Chase Me began to gain a small but significant advantage but once again the final obstacle proved decisive. Chase Me lost his narrow advantage due to a slightly slower jump than his rival but managed to get up close home to share the spoils. 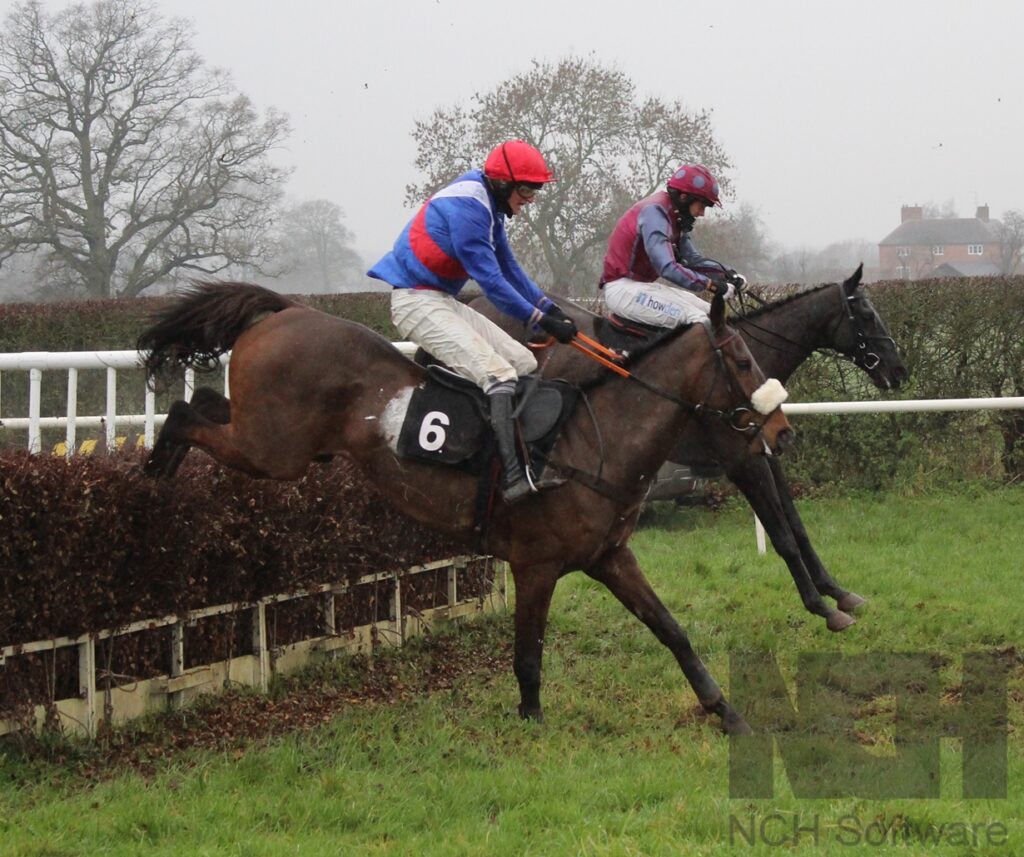 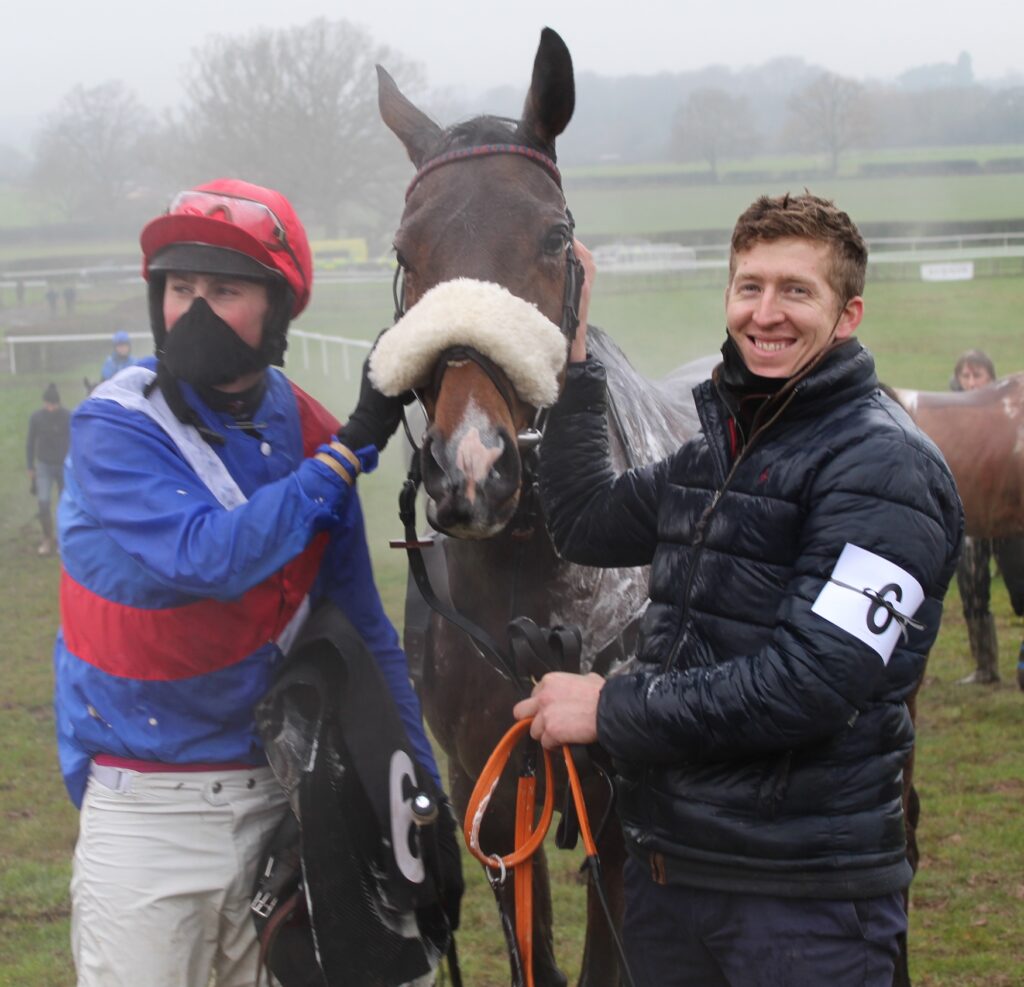 Chase Me and Inchcolm are inseperable at the last and eventually share the spoils. Winning horse and jockey with trainer James Ridley

Inchcolm was showing improved form while Chase Me provided James Ridley with his first winner since moving to a new yard at Ketford near Ledbury during the summer.

Division II of the Conditions went to the Alan Hill trained Hawkhurst and provided a double for Tommie O’Brien. The horse came back to his best at Kimble before lockdown and O’Brien was sitting motionless as Ucello Conti cut out the donkey work.

The leader held a heathy advantage climbing the final hill, but Hawkhurst found an extra gear in the home straight and swooped past the leader at the second from home and had sufficient reserves to withstand the late and persistent finish of Roc D’Aspis on the run in.

The Rowley’s saddled two runners in the closing Highflyer Bloodstock sponsored 2-mile Flat Race, and no doubt Another Brown Bear and Heeratsunset will show the benefit of that experience in due course.

Superior Glance dominated the race from the start but looked beaten when Darren Andrews moved Lettie Lutz up to challenge in the final furlong but to her credit Hugh Edwards’s filly responded well and managed to get her head in front passing the final obstacle. Lettie Lutz’s then showed her tenacity but despite all her efforts she was still a neck in arrears as they passed the judge with this victory providing the second leg of a double for Huw Edwards. 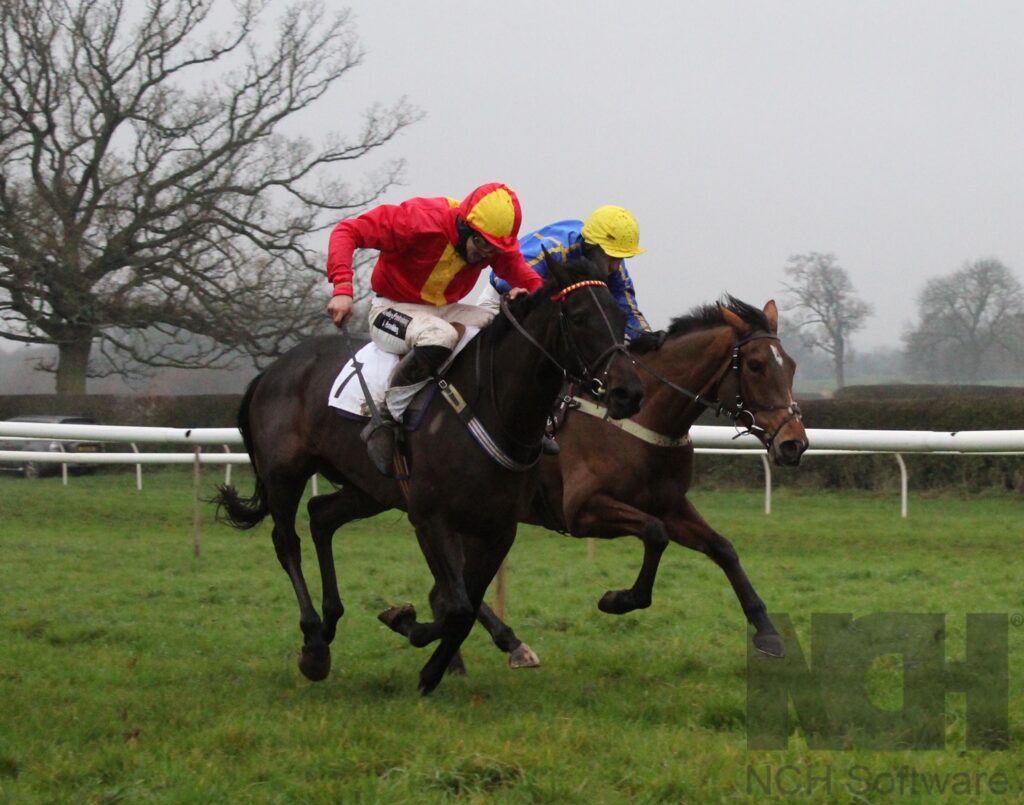 Please find here a download of the 2020/21 point-to-point fixture list, with the latest amendments (as [..]
More info

Could Point-to-Point graduates Native River and Samcro shine at the Cheltenham Festival?

Fans of horse racing all over the world will have their eyes locked on [..]
More info